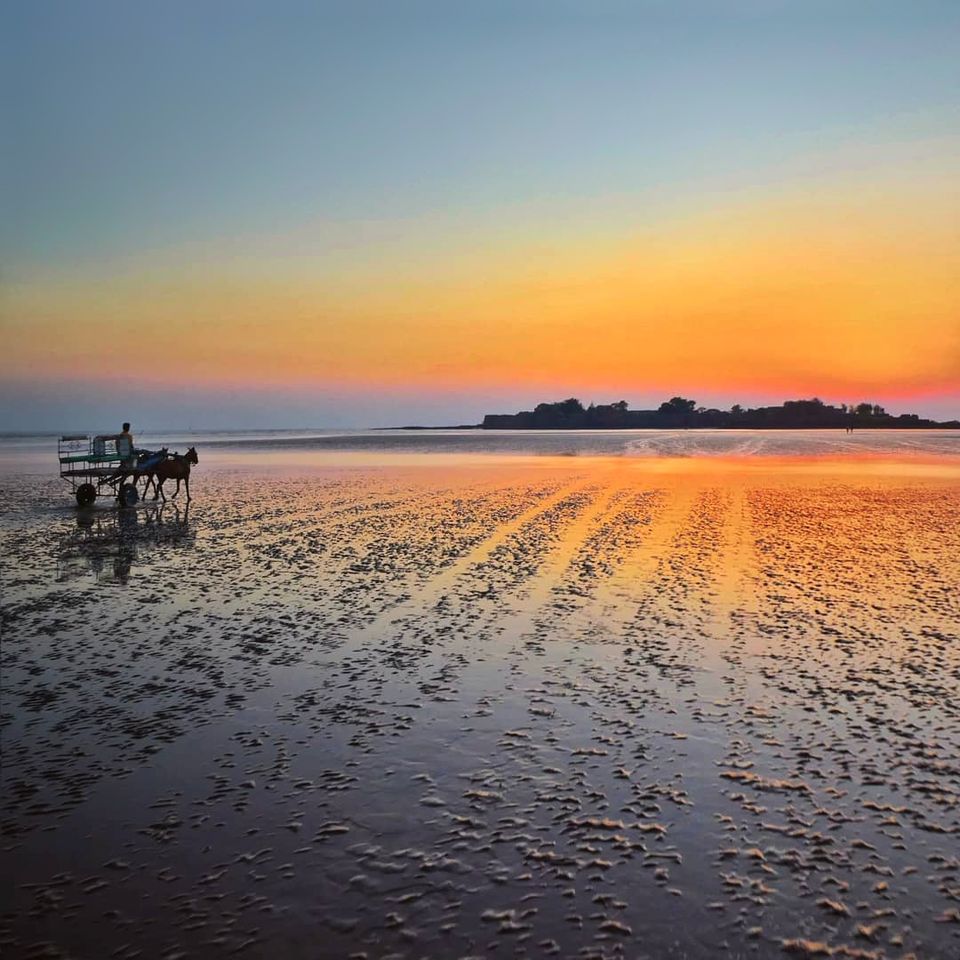 Situated amidst the sea and encircled by the blue waters of Arabian sea, Kolaba fort is one of the most important tourist attraction in Alibag. The 300-year old fort which was once a chief naval station during the reign of Chatrapati Shivaji Maharaj is now a spectacular monument depicting the pristine reflection of the golden era. Large fortified walls, intricately carved temples, a sheer surprise of the freshwater tank, grand Ganesha temple, centuries-old canons, the vestiges of the war, entrances opening to the wide sea view along with the tragedy of being caught in the high tides and missing the return cart ride makes it as one of the unforgettable tales of my travel!

I was in Alibag for a weekend getaway as it’s near to Pune. The headquarters of Raigad district, this coastal town has amazing vibes with some beautiful beaches and forts. It was the second day of the expedition and I was very curious to explore Kulaba fort near to the Alibag beach. I spent enough time to read about it the night before. Next day with a sumptuous Upma breakfast, me and my friend Shailesh marched to Alibag beach.

It was the month of April and the town was deadly hot. I was able to feel the scorching heat of the summer. After walking some distance towards the sea, I could see the fort from the beach.

The fort is barely 2 km from the beach and there were low tides. Shailesh suggested 2 options- either walk by barefoot for or let’s get a horse cart. Off course, I am young enough to ditch the idea of the cart and we started walking step by step in shallow waters.

If you happen to take a walk to the fort, you will be delighted by the serene and tranquil atmosphere, as it is thinly populated and only a few people go to the fort from the beach. The cool water was a sheer relief!

We were about in the middle of the route where the seawater was almost touching the legs. Slowly the water started rising and in no sooner time, it reached up to the hips. Knowing how good I am at swimming, he started scolding, haha. We were stuck in the middle as high tides started and on top of that, the water was continuously rising. Jai Narsimha Deva! Fortunately, one horse cart was approaching the fort and seeing our helpless condition, the kind guy immediately offered seats. I was happy to get both experiences of a walk as well as the cart. What a soothing experience it was while relishing the cool breezes over the background music of horse taps!

Within 10 minutes, we reached to the base. Thanking the guy, I immediately ran to the ticket counter. The Archaeological Survey of India has declared it as a Nationally Protected Monument due to its historical importance. The entry is almost free as the charges are very nominal. It was only INR 5 per person charged by the government. The ticket vendor told us to be back within an hour as high tides were approaching to the extent even the cart cannot pass through the water. With sheer excitement, we were like, “Haan bhai, yu Gaye or yu Aaye!”

The fort has two main gates - One of the gates open right into the Arabian Sea and the other one is located on the sandy shores of the idyllic town. The fort stands at a staggering height of 25 feet.

The entrance leads to a pathway surrounded by some temples on both sides. I was surprised to see so many houses on the fort. These people live on the fort and take care of it, great! There were some temples lying on both sides dedicated Hindu deities like Narayana and Padmavati.

Moving ahead, one can see the remnants of the old temple buildings. Most of the things are ruined yet the fort is dotted with a variety of historical artifacts ranging from military cannons to a wide range of other paraphernalia.

I was able to see a huge temple in the middle. While walking towards, one unusual thing caught my sight on the left. It was “Pushkarini” – it is nothing but a pond that generally lies in the premises of temples, which is made to serve the deities on festivals and various occasions.

The ritual says that one should take a bath in this before having the darshan of Lord. I was surprised to know that despite being located in the middle of the sea and being surrounded by salty water, it has a well within the grounds that supply freshwater. There are also several temples located within the grounds housing deities which are worshiped by the local fishermen communities.

A huge Ganesh temple lies in the middle of the fort. This temple had been built by Raghoji Angre in the year 1759. The temple is a masterpiece of architecture and offers a unique glimpse into the style of that era.

The inner sanctum houses the deities of Ganesha with Riddhi and Siddhi- his two wives. The Ganesha deity is intricately carved and is very beautiful. There are other small temples in the premises of Lord Shiva, Hanuman and Durga. The premises also contain an intricately crafted Tulsi Stambha. On occasions like Ganesha Chaturthi, the residents of Alibag gather at the temple to celebrate the occasion and praise lord.

The command of the fort was given to Darya Sarang and Mainak Bhandari under whom Kolaba fort became the centre of the Maratha attacks on British ships. The fort held an important geographical advantage for the Marathas and was used as a Chief Naval Station for planning strategic attacks on the British troops. The military enthusiasts must go near the northern wall of the fort lie, to see the two English Cannons mounted on wheels. The inscription on the cannon is "Dowson Hardy Field, Low Moor Ironworks, Yorkshire, England”.

Since the fort is located in the middle of the sea, it offers some of the most transcendent views of the Arabian Sea. The clear blue expanse spread out as far as the eye can see, bathing you in the sea breeze is a truly unparalleled experience to cherish. There are openings which lead to the sea surface. Nothing can be peaceful than to hear the roaring waves hitting on the fort walls!

The walls of the fort have a wide variety of carvings in the form of elephants, peacocks and tigers. There is also a dargah dedicated to Haji Kamaluddin Shah that is worth checking out.

The history of the fort is quite interesting. Construction of the Fort as well its reinforcement was completed by Sambhaji Maharaj, after passing away of his father, Chatrapati Shivaji Maharaja. Under the guidance of Kanhoji Angre, Maratha navy wreaked havoc on the British ships by raiding them and looting their possessions. British and Portuguese tried to capture the fort, but they failed. It is stated that many fires engulfed the estate on the fort.

I was keeping an eye on the watch as the time was exceeding the limit. We rushed towards the entrance from where we started. And the thing happened! As waves were rising rapidly, the cart went back to the shore . It was time to wait for the next 3 hours to let the low tides in. There was hardly any place we left unnoticed at fort so we decided to rest near the entrance.

There were some local villagers from nearby areas selling Ranmeva. Ranmeva is a collection of various fruits that flourish in the forests. These fruits are served in leaf with some rock salt at a very cheap rate. The tangy taste satisfies your taste buds.

The hunger pangs were high and we requested a lady to offer some food. She made tasty Pithala Bhakari. While serving hot, she also shared some great past times of the fort. It was the best experience of the expedition!

After about 4 hours, the cart service resumed and we went back to the beach. Since it was evening and a weekend, the residents of the town were enjoying the rides on the shore. Some couples were roaming, some were eating spicy chaat at stalls, children were making sandcastles and some folks were busy while gazing at the sunset.

Sunsets are proof that even endings can be beautiful. Though the day was quite busy, watching sunset was equally relaxing. With the setting sun, we laughed while remembering the adventures in the day. It was a marvelous end to a beautiful day!

Alibag is near to Pune and 2-3 days are sufficient to explore the town and the famous tourist places. I prefer to cover one location at a time to get the feel of the place. However, you can easily cover all places by making a list. Alibag is accessible from Mumbai and Pune. From Pune, it is 143 KM whereas just 95 KM from Mumbai. The best way from Mumbai is the sea route from the Gateway of India to Mandwa Jetty, from where you can take a bus or tempo to Alibag and explore the town.

How to reach to Kulaba fort

19 km from Manda jetty. A regular bus service operates from jetty to town.

Only 2 km from Alibag bus depot

The horse cart ride costs 140 INR to and fro

November to July is considered ideal times to visit the fort because of the pleasant weather. The monsoon months can bring in a lot of rainfall, due to which there are persistent high tides. Summer is quite hot, so the best is winter days.

If you are planning your visit during summers, you should wear light and airy clothes.

Make sure that the tide is not high when you visit if you want to walk to the fort.

If you want to walk to the fort, make sure you wear waterproof shoes.

Do not litter around the fort and try to maintain the cleanliness of the fort.

The fort is in quite a desolate area. If you are weak-hearted, do not visit the place after dark as it can get quite fearsome.

If you happen to be in Alibag, make sure you have a visit to this great fort.