Punjab Travel GuidePunjab TripsKanha: A Jungle Safari In The Forest Of Mowgli- Part 1

Kanha: A jungle safari in the forest of Mowgli- Part 1

Summer, they say, is the best season for wildlife sightings. The scorching summer heat dries up the water sources in the forests, affecting the animals and birds. So, these denizens of the forest frequently gather around the waterholes to quench their thirst, after those are refilled by the Forest Department.

" A good tiger sighting would more than make up for the sweltering heat."

This piece of advice from a trusted friend made us agree to plan for a Jungle Safari to Kanha National Park, in Madhya Pradesh, in the month of April last year. We knew that the trip would require us to brave the soaring mercury levels.

A thrilling sensation of adventure took over as we as we set out for our trip to Raipur from Mumbai. We would soon be heading for the jungle, which provided the inspiration for the tales of Mowgli and Bagheera in Kipling's Jungle Book. 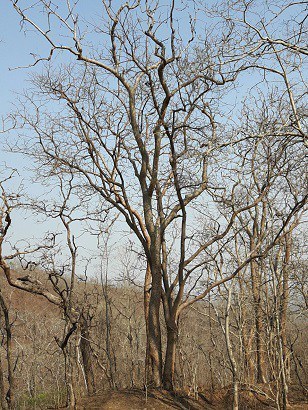 From Raipur Airport to the Resort

As soon as we came out of the Raipur airport, the difference in temperature was instantly apparent. I, instinctively, covered my head to avoid the heat of the blazing Sun. The resort where we had booked our stay had arranged for the pickup, and the driver was waiting for us. Without wasting a second we hopped inside the car.

It was a long 3-hour journey before we reached Kanha. On the way, the land looked arid; a stretch of the road was hilly and strangely none of the trees on the hills had any leaves on them, which rendered an eerie appearance to the whole place.

We reached the resort by 5 pm. We were received and welcomed by the Manager of the resort, who took us to our cottage. Beautiful illustrations of indigenous Gond tribal art adorned the walls of the cottage.

The Manager informed us that the last safari of the day had left by then. Our group of friends who had reached before us had gone for the safari. We freshened up and relaxed. With nothing much to do in the evening, we decided to go for a walk to the village. The Manager suggested that one of the persons working at the resort would show us around the village.

A Stroll in the Village Street

By the time we started for Samnapur village, it was around 6 pm and the weather was pleasant. Kishan, who guided us through the village, is a resident of the village. On the way, he briefed us on the village lifestyle and told us about the crops they grow on their farms, including rice, wheat and gram.

It was a quaint village with striking cleanliness. The houses were uniformly painted in blue and white, and the walls were made of mud bricks and straw. Some of the houses had cattle sheds in the front, a courtyard in between, and the living rooms were built behind the courtyard. There was a school in the village and some small shops for the daily necessities.

'Can we enter a village house to see how it looks?' I requested Kishan.

He nodded. After about ten minutes, he stopped. Asking us to wait, he then entered a house, which I later came to know, belonged to the person who had made the paintings on the cottage walls. After a while, he came out and called us inside. As we took off our shoes and entered the house, some hens came running out.

The walls of the house were decorated with beautiful Gond paintings, similar to the ones we had seen on the cottage walls. Made of intricate lines, the paintings were expressions of their everyday life, their celebrations, rituals, and the local flora and fauna. Dots and dashes filled the outlines in such a way that conveyed a sense of movement to the still images.

The painter was not at home. I could not move my eyes from a wall and stood there appreciating the wall paintings on three sides of the room.

"A good painting brings in good luck," his wife told us as she put on the light while her children watched with an amused look on their face.

Our guide further added that the paintings are made with natural colors. Yellow and brown colours are obtained from coloured sand, and red colour is derived from the Hibiscus flower.

I thought there must be quite some demand for such indigenous art, but had to change my opinion after I came to know that the person has to paint signboards for a living.

Heading Back to the Resort

At the corner of the village road was a Peepal tree, which we learnt was more than a hundred years old. When the full moon showed up from behind the trees, we decided to turn back towards the resort.

On the way back, we crossed a marriage procession. Women dressed in fineries walked, singing folk songs in Chhattisgarhi language. A few metres behind the women folk came the youngsters in a decorated tempo, with a loudspeaker playing out the popular Hindi tune ' Yeh ladki beautiful '.

Hindi film songs are a great unifying factor in any corner of India!

Back at the resort, over a cup of tea, we had an interesting conversation with the resident Naturalist, who briefed us on the behavioural patterns of animals in the forest and the incidents of tiger sightings.

Our friends were back from the safari before dinner. We had a relaxed dinner and retired early. Next day we were to leave for the safari at 5.15 AM in the morning.