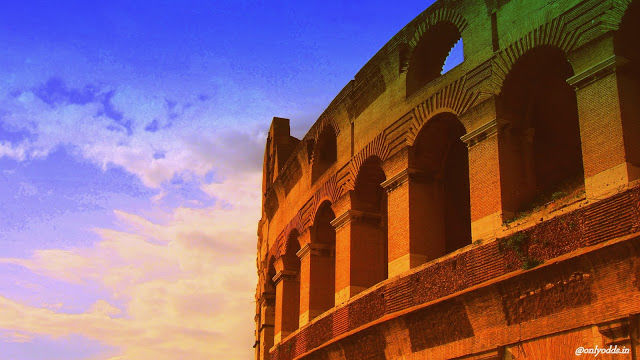 Traveling to Rome? How to Travel Rome in 2 days? All such questions do pop when one plan to visit Rome! Here is your plan..

There is a lovely saying about Rome - "non basta una vita"- A lifetime is not enough!!

Rome is one of the most beautiful cities in the world but there is so much more to it than, just the Colosseum.

After wandering on the streets where Julius Caesar once did, next, climb upto Palantine Hill to see the ruins of the imperial palaces of Rome. Enjoy the beautiful garden areas and fragments of ancient villas. With beautiful sights all around you and clear blue Italian skies above, the Eternal City is truly the place for star-crossed lovers.

In Europe every city has a square, which depicts the beauty and boasts upon lifestyle but Rome is all about the streets in that matter. Rome is romance!!

One can find a story at every nook and corner of Rome, like tossing a coin into the Trevi Fountain: it’s two coins for a new romance, and three for marriage. Around € 3000, heaved in the fountain every day!

Take a pause at Spanish Steps and soak in all the love that keeps oozing from the couples spending time here. It's the place where the original romantics are remembered, in the form of the Keats-Shelley House, located to the right of the steps. It’s easy to see why the two great poets loved coming here: the steps are suitable for lengthy poetic musings. Each year in May the steps are decorated with pink azaleas, 135 steps with flowers truly a monumental view.

Be captivated by the majesty of Colosseum - the remarkable ruin of ancient amphitheater where citizens went to watch exhilarating fights 2000 years ago. The largest structure left to us by Roman antiquity, the Colosseum still provides the model for sports arenas. Present day football stadium design is clearly based on this oval Roman plan.

Beside the Colosseum, stands the almost equally familiar Arch of Constantine, a triumphal arch erected by the Senate to honor the emperor as "liberator of the city and bringer of peace"

Before sun dips down, there is a must to do thing, gazing the sunset from Piazza Del Campidoglio, a beautiful panoramic view of the Roman Forum from above, with the Palatine Hill and the Colosseum in the background. Roman Forum- consists of several ruins of ancient government buildings of the City of Rome. In ancient Rome, this was the center of day to day life. It has been called the most celebrated meeting place in the world.

Talking about squares, Piazza Navona the oldest of the city back across the river and home to Bernini Fountains, cafe's, colorful street performers and a huge crowd, is famous for a lively atmosphere. Campo de’ Fiori is a rectangular square south of Piazza Navona used as a marketplace during the day, and party central for college students and tourists at night. The name means “field of flowers” and was first given during the Middle Ages when the area was actually a meadow.

For art and museum lovers', the smallest country, The Vatican City, a city-state surrounded by Rome, will be like a platter to their cravings. It's the headquarters of the Roman Catholic Church, home to the Pope and a trove of iconic art and architecture.

Almost after 2000 years, the breathtaking Pantheon is a remarkable building to see even today. The word Pantheon is a Greek adjective meaning “honor all Gods”. In fact it was first built as a temple to all gods, now a catholic church. There are no windows inside, only an Oculus which is the only source of light.

Striding around Rome is like walking in an open-air museum. For that matter whole of Italy feels like walking around in a museum, but that’s simply because there are so many beautiful buildings to find.

Weather it was a small cafe, a fountain, an adorable looking street or just ruins – reminders of the past lives of Roman citizens.

Still, when I talk about Rome, I feel like I am talking about a person. This person has a loud unique aura and fun personality to be with.