A Tour of Rome, Italy with a Local

Rome has always attracted travellers far and wide, beyond the passage of time. Called the “Eternal City”, this Italian capital has a history that dates back to over 2000 years. Whether an artist or a historian, an author or a researcher, a traveller or a tourist, Rome catches the fancy of every being who steps into its romance with the past yet intimacy with the urban fore. Thus is the aim of this tour, to give you more than just a glimpse of the numerous interesting facets of Rome and a Roman’s life in this populis! Starting from Ancient Rome, we’ll sway into the medley of the medieval spiritual Rome and finally end our three half-day tour indulging into the intricacies of what made renaissance modern Rome, most of which reflects in the Roman way of life, even today!

Day one: A day in the Ancient Rome

Our meeting and starting point will be Piazza Venezia, right outside the Antico Caffè Castellino. From here, we’ll head to the Capitoline Hill of Rome. Then from the Circus Maximus, we will go to see the Palatine Hill where the very early huts of the time of Romulus and Remus (8th c. b.c.) were located, followed by a visit to the Theatre of Marcellus, the Tiberine Island, the Mouth of Truth, and the Temples of Portunus and of Hercules.

Our day will proceed as we walk beside the remains of the Roman Forum. And then we’ll head to what we Romans consider as the best remaining example of the Roman power, which is the Coloseum, followed by a quick visit to the Baths of Caracalla. Finally, the best place to end this tour will be at the Pantheon

The Middle Ages mark a very important phase in Roman and European history. And many epitomes of this historicity reflect still in the streets and structures of what was erstwhile Roman city-state.

Our day two will, hence, start with a tour of the Santa Prassede and Santa Pudenziana, followed by the medieval remains of Trastevere and of Campo Marzio.

There’s no better place to explore the romance of renaissance than the Vatican Museum. Next we’ll visit the ever-enchanting St. Peter’s Basilica. Finally on our itinerary will be a visit to those statutes of Papal power exhibited by numerous different Popes and Cardinals and the Medici and other paternal families, such as Palazzo della Cancelleria, Palazzo Farnese, Piazza Navona. And we’ll end this trip of Roman grandeur with a trip to Chiesa del Gesù, Piazza SS. Apostoli, via del Corso, Trevi Fountain, Spanis Square and the Piazza del popolo.

Each of these three half-days of 3/4 hours has a cost of 200 Euros for a maximum of 4 guests. Guests booking all three half days will have a 30% discount on the third one. Winter discount (from November through February) 30% !

Regarded highly in the legends encircling Rome’s history and mythology, Palatine Hill is the center most of the seven hills on which Rome was built. Legends tell us how Romulus and Remus (the legendary founders of Rome) were found on this hill top by the She-wolf who raised them. Famous senators such as Augustus Caesar are said to have lived on this hill, deriving the word “palace” from Palatine. Used for around 300-350 years, the Domitian’s imperial palace covers most of the hill, alongside a museum that houses many precious artifacts from Rome’s glorious ancient past. 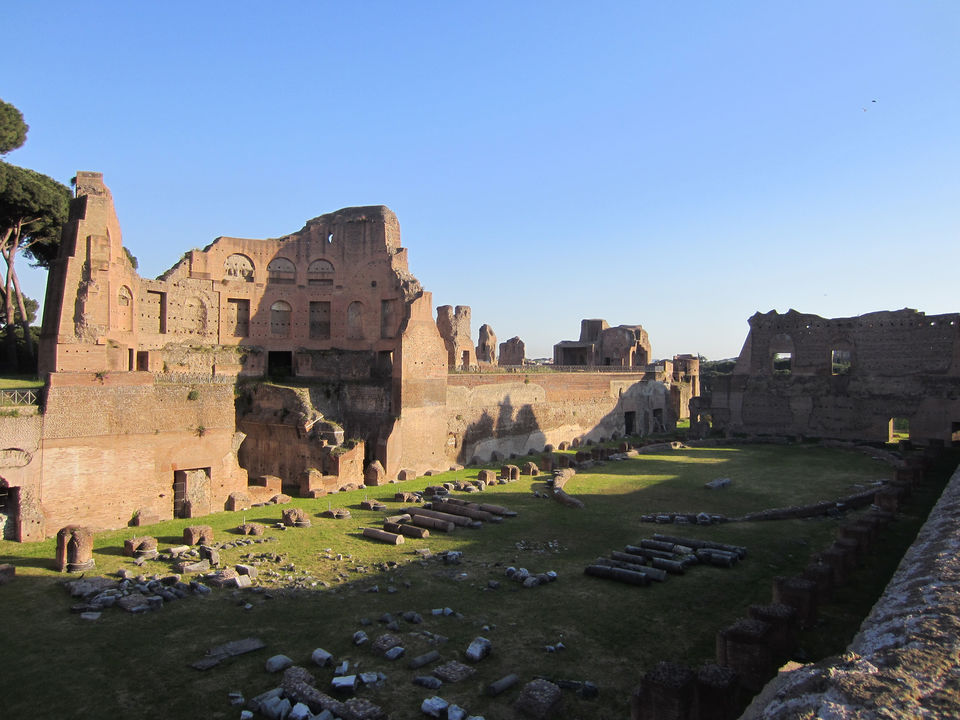 West of the Colosseum lies one of the oldest yet most important architectural landmarks of ancient Rome- The Roman Forum. It is a rectangular plaza, marked with ruins of some important government buildings of ancient Rome, making it an important part of the popular public life, especially pertaining with processions, trails, meetings, speeches, elections and gladiator matches. It is also known to have enshrined Roman Gods & Goddesses, alongside the house of The Senate of Roman city states, which eventually gave birth to the Republican government in Rome. Structure built by the great Julius Caesar and his likewise successors still stand tall for numerous archaeological speculation even today. Although visibly in ruins, the Roman Forum resonates the architectural marvels, debatable political past and grandeur culture that ancient Rome was. 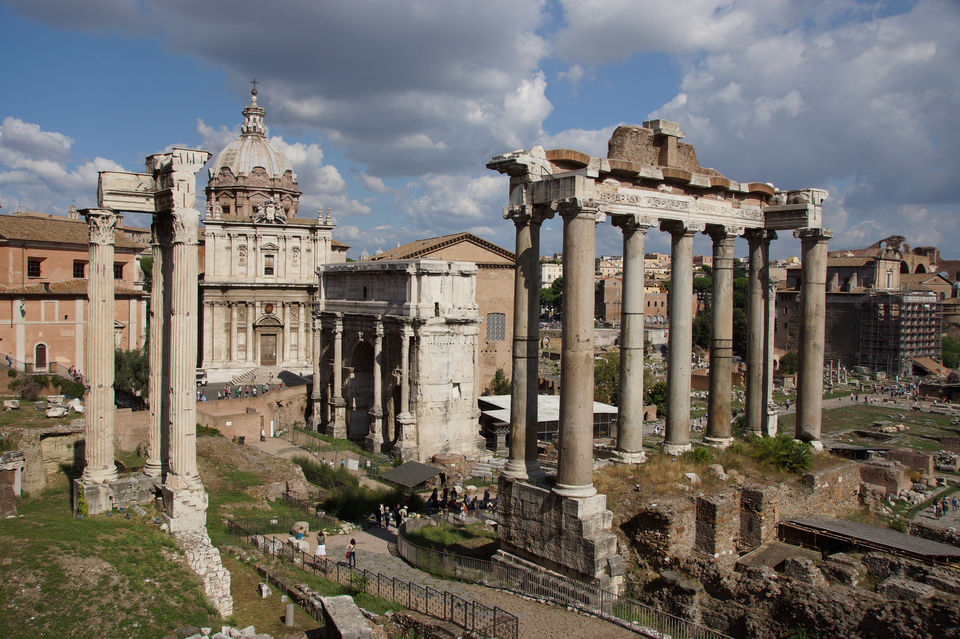 Truly one of the most iconic places, not only in Rome, but also in the rest of the world is the Colosseum, situated right in the center of the city, indicating its great importance even today. Also known as the Flavius Amphitheater, this UNESCO World Heritage Site is the largest of its kind in the world. Having sheltered around 50,000 to 80,000 people in its time, this epitome of Roman engineering and architecture was mostly used for entertainment purposes in the ancient and early medieval era. In built, this enormous monument comprises four floors, with 80 colossal arches encircling each floor. With the passage of time and natural calamities and causes, much of the Colosseum is in ruins yet this doesn’t stop it from casting its aura of splendour and grandeur over the entire city, during the day as well as by night! 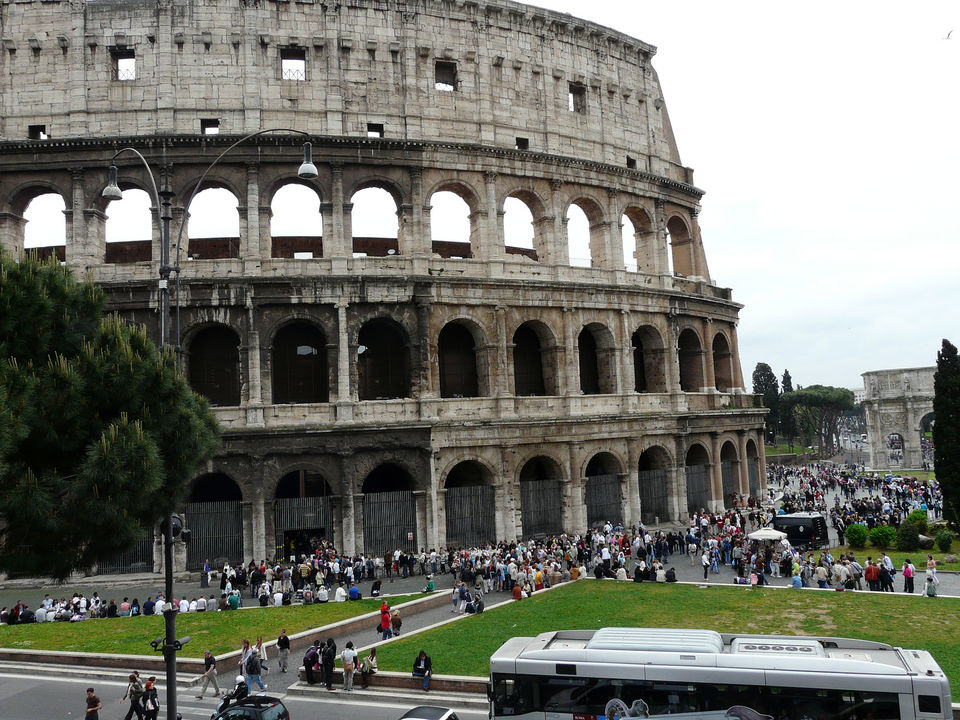 With a huge 43 meter high done, the Pantheon is one of the best preserved Roman buildings. The dome has only one opening at the top, called Oculus, which is the only natural light source for the entire structure. The Pantheon has served the purpose of a temple for pagan gods, a church, and a tomb to many Italian kings. 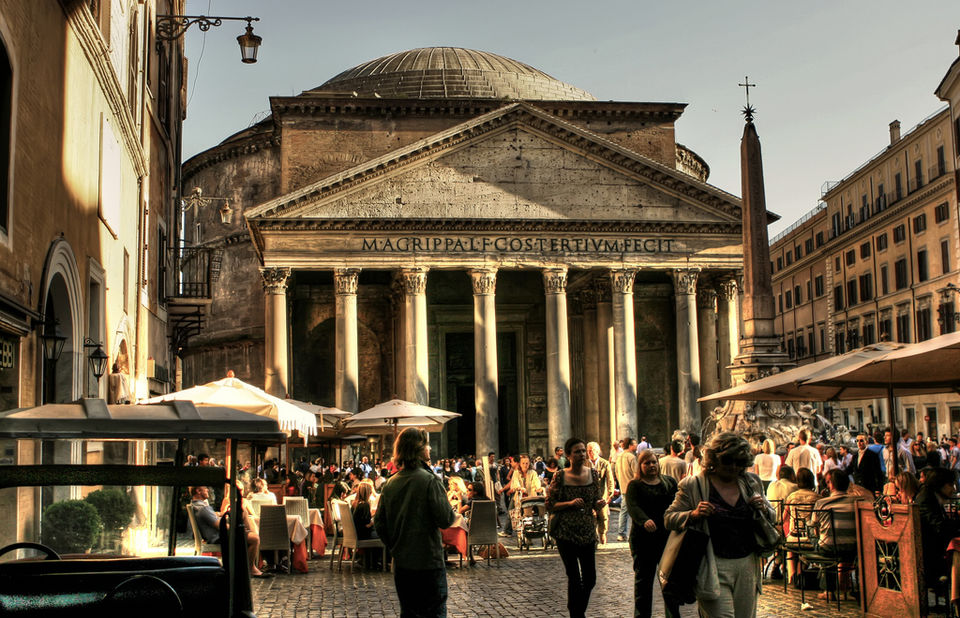 Along with Castel Sant'Angelo, Basilica Di Santa Prassede has stood the testimony of time and a many economical and artistic changes that occurred from the 5th to the 14th century A.D., tracing Roman past from the Middle Ages to the Renaissance. Having been reestablished under Papal authority, it served as a saving grace and hidden space for many Popes and Cardinals through various tribunal and war times. 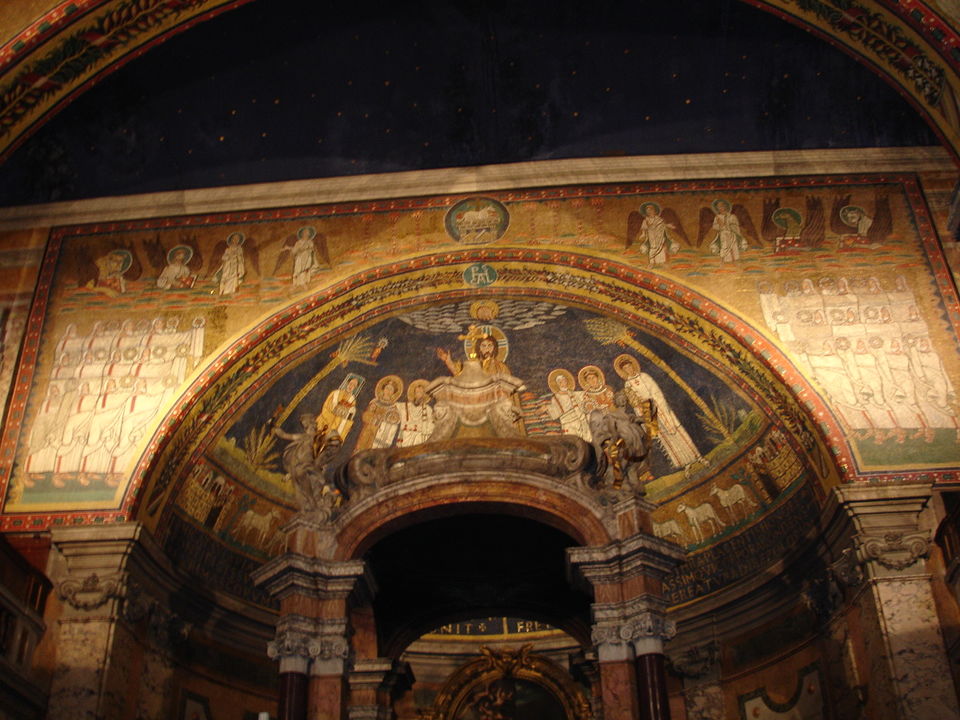 These museums within the Vatican are a much envied store house of the most treasured artistic works such as paintings and sculptures, dating back to the Renaissance. Having being founded in the early 16th century, the Vatican museums along with the 64 galleries are more than 500 years old. Not only thousands, but millions of tourists visit these museums each year, in reverence and aww of such artistic excellence. The Sistine Chapel, famously known for its ceiling having been painted by Michelangelo, is undoubtedly the most renowned living memory of Renaissance Art across the world. Besides this, Raphael’s Stanza Della Segnatura is also quite popular here. This visit truly marks the quintessence of art in Rome. 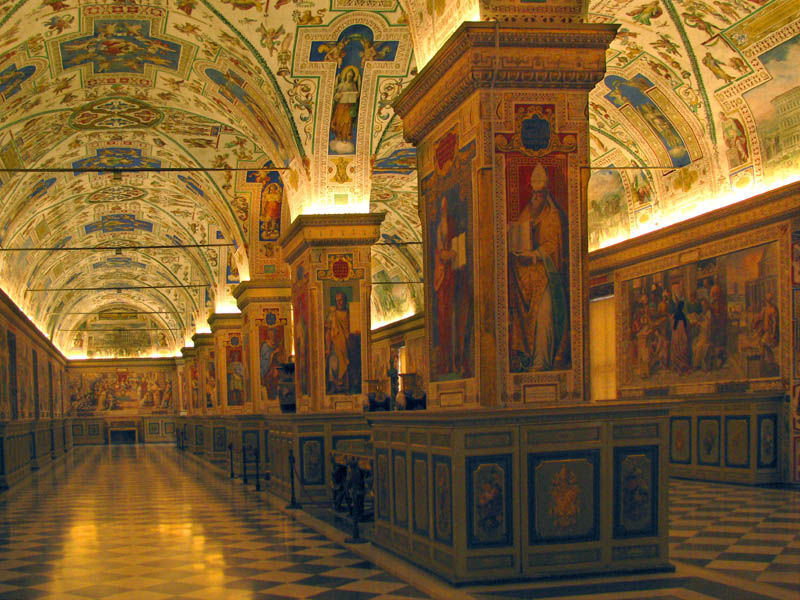 St. Peter’s Basilica in Vatican City truly sums up the artistic excellence and fine Renaissance spirit. Revered for being built on the crucifixion spot of the first Pope- St. Peter, this church is one of the largest built in Rome. From Michelangelo, to Bernini, to Raphael, to Bramante, and even Peruzzi, many famous geniuses worked on the structure of this church. It was built during the peak of the Renaissance in Italy, bringing together both- Renaissance and Baroque style of architecture together, making the basilica a must see! 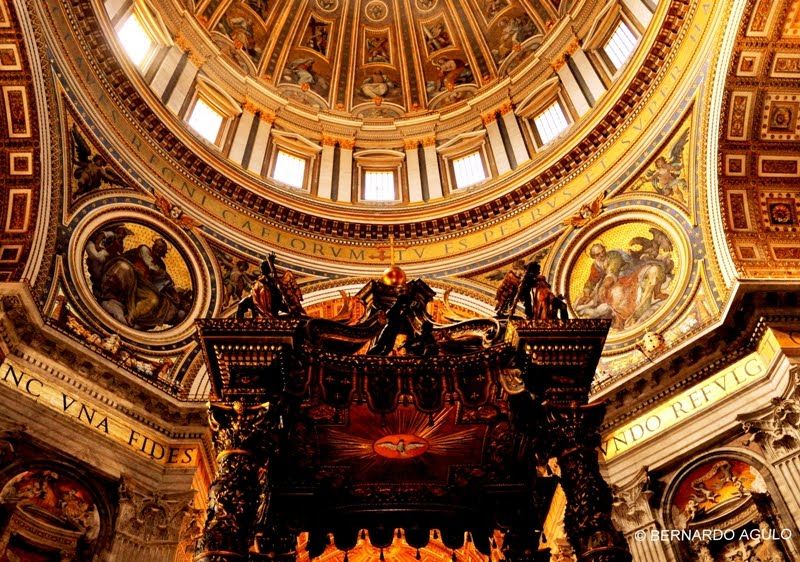 A world famous fountain, Trevi Fountain is known for being the largest fountain depicting the Baroque style of architecture. And despite the crowd, that stays throughout the year, don't forget to toss your coin! 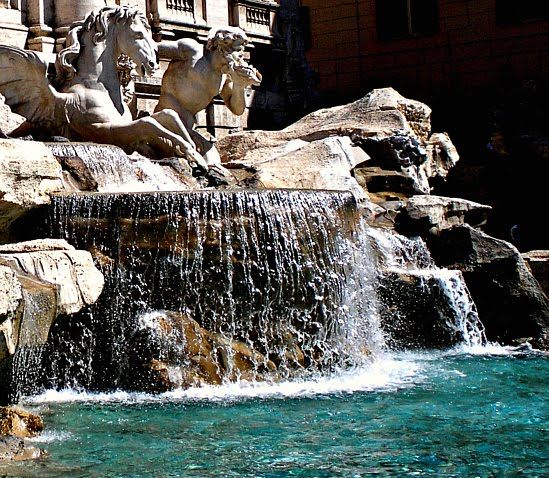 This is a world famous city square, usually crowded, yet one of the most picturesque parts of the city. Made on the site of the Stadium of Domitian, Piazza Navona encompasses three fountains, namely the Fount of the Four Rivers, Neptune Fountain, and the Moor Fountain. It is also a favourite tourist spot for its street culture and the little cafe outlets in the alleys and cobbled lanes that stream out of this Piazza. 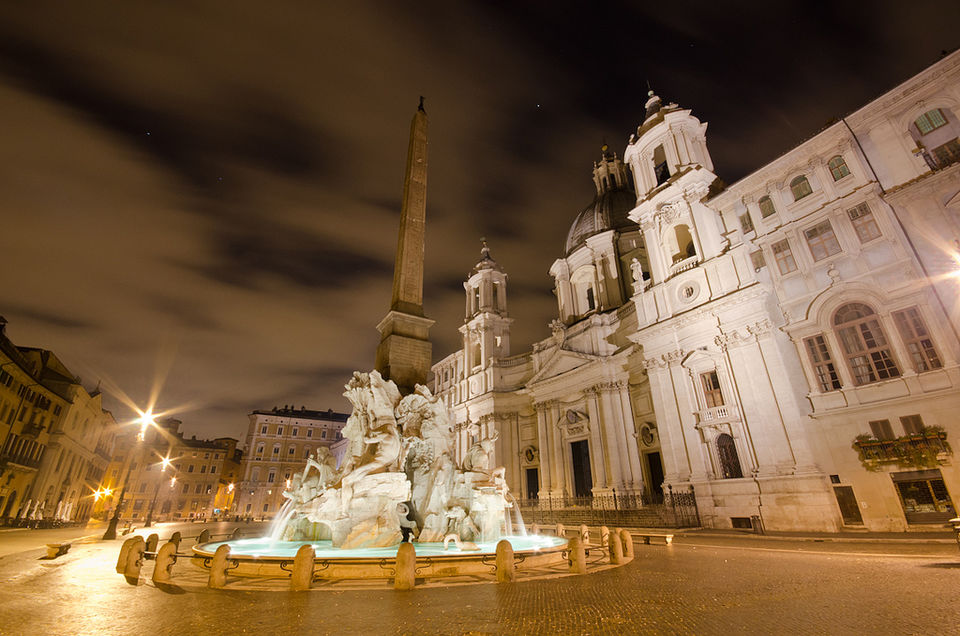