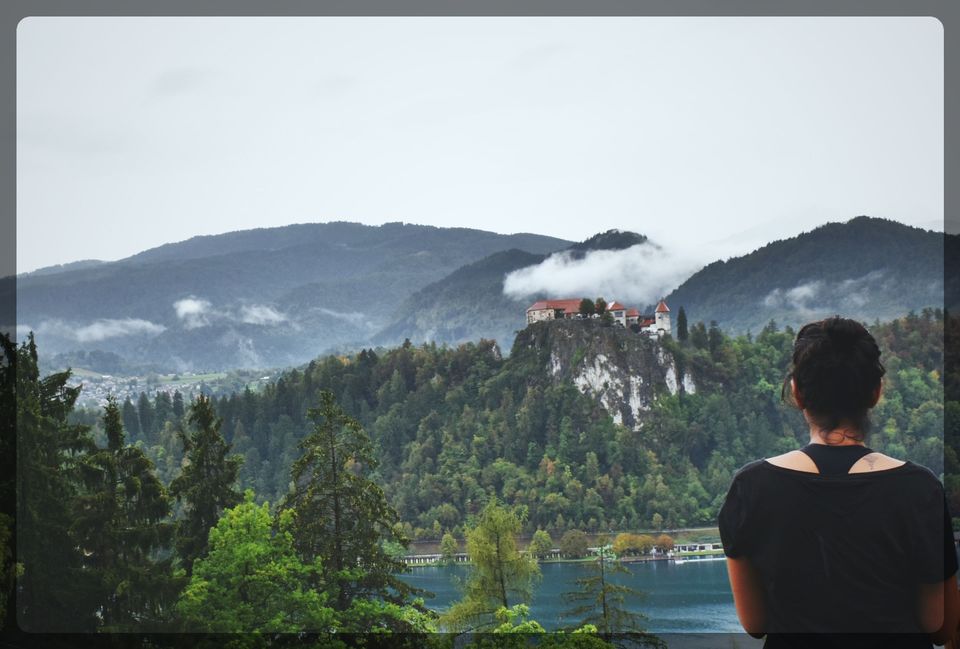 I am the kind of girl who jumps on every opportunity to travel to a new place. As much as I'd be excited about the trip I'll be apprehensive about the challenges that I might face - be it from a very basic one like getting up on time to a little more complex like walking drenched in rain or in an extremely cold weather.

As I started traveling more, I became more comfortable with the discomforts that accompany it. I won't say I can now survive in any condition because I still need to overcome a lot of my inhibitions.

The major highlight of all these progressive changes in me was my trip to Bled in Slovenia.

A TRAVEL STORY OF THE PAST

Before I start talking about Bled, I'll tell about another trip to a place in India. I went out with a friend and her colleagues for a trek to Tadiandamol in Karnataka. The weather conditions and the trekking trail were totally out of my comfort zone. It was everything that I dread before a trip.

I get cold very easily and I don't like to get soaked in rains when I am traveling. I hate when my feet dip in the mud. I hate walking through the forest and touching mosses for support from trees. I am scared of heights and I am scared of falling down a cliff. - these are the things that make me the most nervous whenever I listen to "Let's go for a trek".

I sure still get a little apprehensive about all these things that I have mentioned above, but with every such experience, I am becoming more prepared both mentally and physically to take the challenge.

A TRAVEL STORY IN BLED

WHY BLED AND WHY THE HIKES?

Bled was a random google search result to must-visit places in central Europe. A friend of mine from European Summer School convinced me to visit the place and without a lot of research, I blindly followed my friend's and the internet's suggestion.

I knew this much for sure that Bled was famous for the beautiful views of the Lake Bled and the Bled Castle on a clear sunny day.

But as luck would have it, rains were predicted for the duration I was going to be in the town. I didn't want to miss out on a place and just sit back in the hostel or a cozy cafe waiting for the rain to stop. I wanted to get out and see the much-praised postcard views of Bled.

My hostel's host suggested two viewpoints that I must visit to get the panoramic views of the lake. And as unplanned and under-prepared I am, I didn't do any research and just asked him the difficulty level of both the hikes. I needed this information to gauge my capability of completing these hikes by myself and also the motivation to actually go for them.

The first hike according to him was easier and the second one a little advanced. With this, he also explicitly mentioned that the views from the second hike were unmatched.

Anyhow, it was raining the morning I had to go out for the hike, so I postponed my plan until the rain stopped. Around 10:00 am it finally stopped raining, and that's when I hurried out of my room with my impatient feet eagerly pushing me.

The starting point of the hike to Straza was very near my hostel, so I decided to begin with it and follow the trail to the next hike at Ojstrica.

Incidentally, there was not a single person around the area, both while coming up and going down and I had the whole place to myself.

On my way back, I didn't want to re-iterate the path I had already taken, so I decided to go down the forested trail.

While I casually climbed the hill, it was a lot trickier hiking down. You may know by now that I am scared of heights, forested, and mudded trails and a little more worried about who'll inform my family if something happens to me. Lame as it may sound, it becomes huge when you are in that position and over-thinking and exaggerating your fears. With constant pouring of the rain and leaves brushing against me, I somehow managed to come out of my tiny scared self and reached down in one piece. It was a joyous little moment for me overcoming my inner fears!

Oh! I completely forgot about the views - It was clouded so I couldn't see the Bled castle as clearly, but the clouded greens were so picturesque that I could have stayed there longer had it not started raining again.

By the time I got down, I was already drenched in water and in dire need of a restroom and some hot coffee. So I stopped at a restaurant for a snack and from there decided to go back to the hostel to get some rest. I thought to myself that it's ok if I am not able to make it to the second hike - it was anyways a little difficult.

After reaching the hostel, I told my host about the Straza hike that I just completed and was feeling super proud of.

And just when I thought I have accomplished something, he said, the second hike, though not very safe and a little difficult during rains has amazing views!

The words that stuck in my mind and kept repeating in a loop were, "but it has the most amazing view". At that very moment, I decided to go to Ojstrica and check these views for myself.

I dried myself and quickly changed. I could not wear my shoes again as they got wet in the rain, therefore I wore flip flops instead assuming it'll be fine and the hiking in them won't be too difficult.

Given that it had rained all afternoon, wearing flip-flops was not a very good choice it seems.

Anyways, there was a whole lot of adventure before I even reached the starting point of the hike!

I started following the walking trail as shown on google maps, and it led me to two apparent dead ends. I retraced back my steps only to end up in an open meadow with no visible ins and outs.

In all this confusion and hopelessness, I saw a dog coming towards me. I actually felt a little relieved on seeing another soul in the middle of nowhere. Soon after, the dog's owner followed it and I was literally smiling with joy when I saw her. I asked the lady for the directions to Ojstrica and followed the path she showed. The route she directed was quite easy as it was through a jogging trail and there were more people than I had seen the entire day.

After walking for around 20-25 minutes, I was finally able to see the starting point of Ojstrica hike.

I was actually suggested to not go further because I was wearing flip-flops and the rocks were very slippery.

I would say that it did not affect my determination because, one, I had already walked a lot after I left my hostel to do that hike, second, I wanted to see the view that was so talked about. So undeterred, I kept climbing unaffected by the people who crossed me wondering how I am going to make it. I kept my pace slow and steady without trying to hurry up.

As I started nearing the top of the hill, the muddy path became rockier. I took extra care to not slip on a wet rock. Towards the end, I used my hands to get an extra support and when I finally reached the top.....

It was a perfect spot to view the sunset from, but I did not stay back because I wanted to get down before it got dark.

On my way down, I tried to take a shortcut, and that was the only time, I fell down, my hands and butt soaked in mud. Thank goodness, there were other hikers who were climbing up that pulled me and helped me get on the right trail.

At the end of the day, here I was, after having experienced, the rain, the mud, the forest, and the height. I was super happy and though I caught fever a day after, it was one of the proudest moments for me as I got over my fears and discomforts.