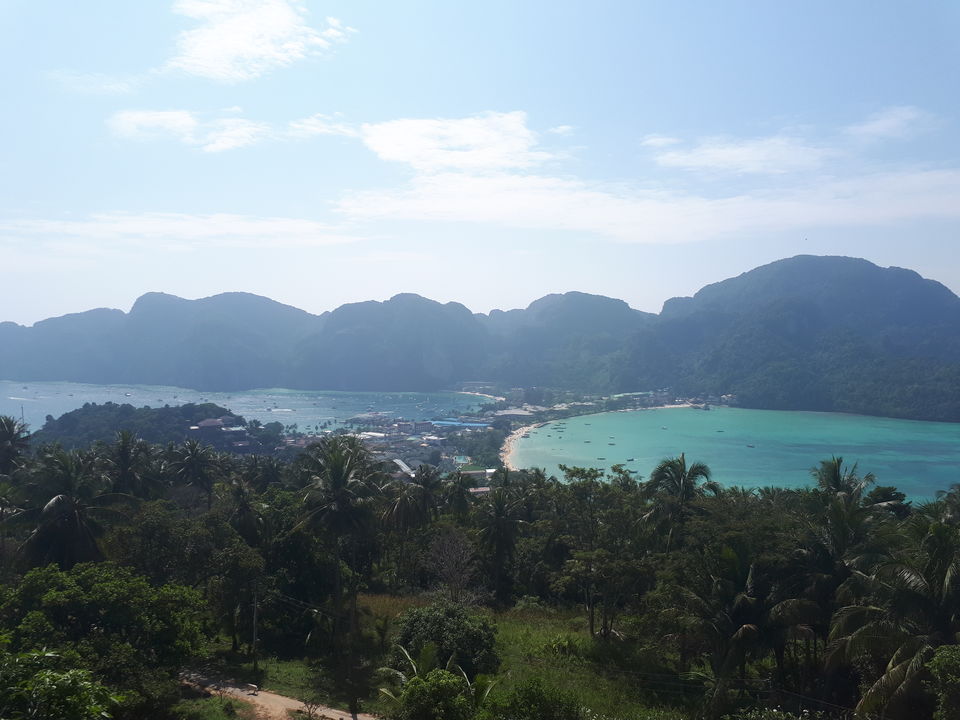 We’d reached Phuket in the night and after a missed flight our patience was running low. As we stood in line to get our bags from the conveyor belt, I heard a noise and looked up; a part of the ceiling just came crashing down on some poor bystanders waiting for their baggage. Apparently they were renovating the gypsum ceiling, but had evidently forgotten that it was a working airport, bound to have passengers to and fro. Wondering what could wrong next, we proceeded toward the exit when we found out that public transportation wasn’t available and all of the other passengers weren’t going to Phuket town or already had their hotel cars. A few taxis were willing to take us to town, but for THB 800 we decided it was too expensive.

Looking very hungry, helpless and almost homeless, two guys out of the blue asked if we wanted to share a taxi with them. Turns out they were going to the same hostel as us in Phuket town. We were saved!

We were out of the party and touristy areas, so when we reached town, everything was shut and looked quite desolate. Nevertheless, we found a pub which was open and had live music going on. Trying my first Thai beer, (Tiger beer) we proceeded to order an authentic plate of green curry. Well hydrated and full, we decided to crash for the night as we had a big day ahead. We were supposed to split up, while I went to Phi Phi (strictly pronounced Pee Pee) island, Gayatri was to go to Krabi.

As the ferry approached Phi Phi, nothing could be more idyllic. The clear azure sky, the crystal clear sea and the huge rocky mountains rising up in the middle of the ocean was something out of a dream and the happiness was starting to kick in. I literally jumped my way on shore and very excited to explore Phi Phi I set off to find the hostel. I wanted to party it up here, so I had planned to stay in a hostel right at the beach. I knew it would be a crazy place, but had no idea how crazy it could get.

One of the many beaches

Phi Phi is what is right and what is wrong, with the world, at both times. In the day it is this calm tropical paradise island and in the night it morphs into an unsustainable vice island. All the vices that you can imagine in the world go on here. All of the hostels which are on the beach have a party every night which starts with fire shows and tricks at 8pm and then the dance floor or dance sand is open till the 2 in the night.

One of the parties

One night when I went down to the beach I saw a few men wearing neon jackets with the word GUARD on them. They had a checklist of sorts. My mind immediately went into panic mode as I thought they were police about to raid the place, a scene much too common for Indians. As I went near, I saw that they were security and upon further inspection I saw that the checklist was actually a price list for drugs. Both hard and soft. I immediately turned back up, the way I came. Phi Phi indeed. Maybe they were undercover police.

I was partying all night and going on treks, swimming in the sea, doing boat cruises in the daytime. Vladimir, a cool Czech tech guy who was here with his mate who was sick, joined me in all of the revelries. We signed up for the pirate booze cruise which was a boat ride through the smaller islands near Phi Phi. The boat was full of Brazilians and they made sure the boat was indeed a party boat. Brazilian music, the idyll landscape made all of it seem very surreal. The first stop on the booze cruise was the small beach named monkey beach. It was indeed a “Life of Pi” moment when hundreds of monkeys were running about and climbing on people. The highlight of the trip was the Maya bay, a gorgeous small island and home to the famous Leonardo Di Caprio “the beach”. We snorkeled, we kayaked and we jumped out the boat into the cool blue water below.

When we weren’t jumping of boats or cradling monkeys in our laps, we were hiking up the mountain on the island and lapping some of the most breathtaking views I’ve seen in my entire life.

Standing on the highest point in Phi Phi, I looked down on the tropical scene, the coconut trees, the white sand beach and the mingling of the sky and the sea at the horizon and wondered.

Wondered about last year when similarly I was looking down to ice and snow and waterfalls in Iceland and it reminded me of how much I love to travel and how much more I have to travel.

The view from top

Coming down from the mountain, we took a longer path and worked our way down to one of the swimming beaches, where we swam until sunset and until it was time to party again.

Koh Phi Phi ofers a lot of adventure and water sport activities as well and although I extended a day in Phi Phi, I didnt have the time nor money to do them. But the scuba diving in one of the best in the world.

I then went on to take a morning ferry to Krabi, to take a flight to Bangkok where Gayatri was already waiting.

Budget: INR 1500 per day (not including water sports)