Breathe easy and slow down ; that's how Kerala's backwaters affect you

1. So how does one collate a few memorable experiences of a new place on an official trip. A search on the Google does yield a plethora of places but then considering the options that the internet spews, frankly one gets overwhelmed. At least this was the case with me as I debated what to see in the one odd holiday that one gets while on a short official trip.

2. So, here I was in Kochi, sitting in my hotel in the evening wondering where to go on the approaching Sunday and as I scrolled through the Top Ten/Top Twenty and so on lists a broad list was emerging but then again it was a broad list and the choice still had to be made. Eventually I decided to see the one thing that made Kerala market its brand in the tourism industry and that is “Backwaters”. 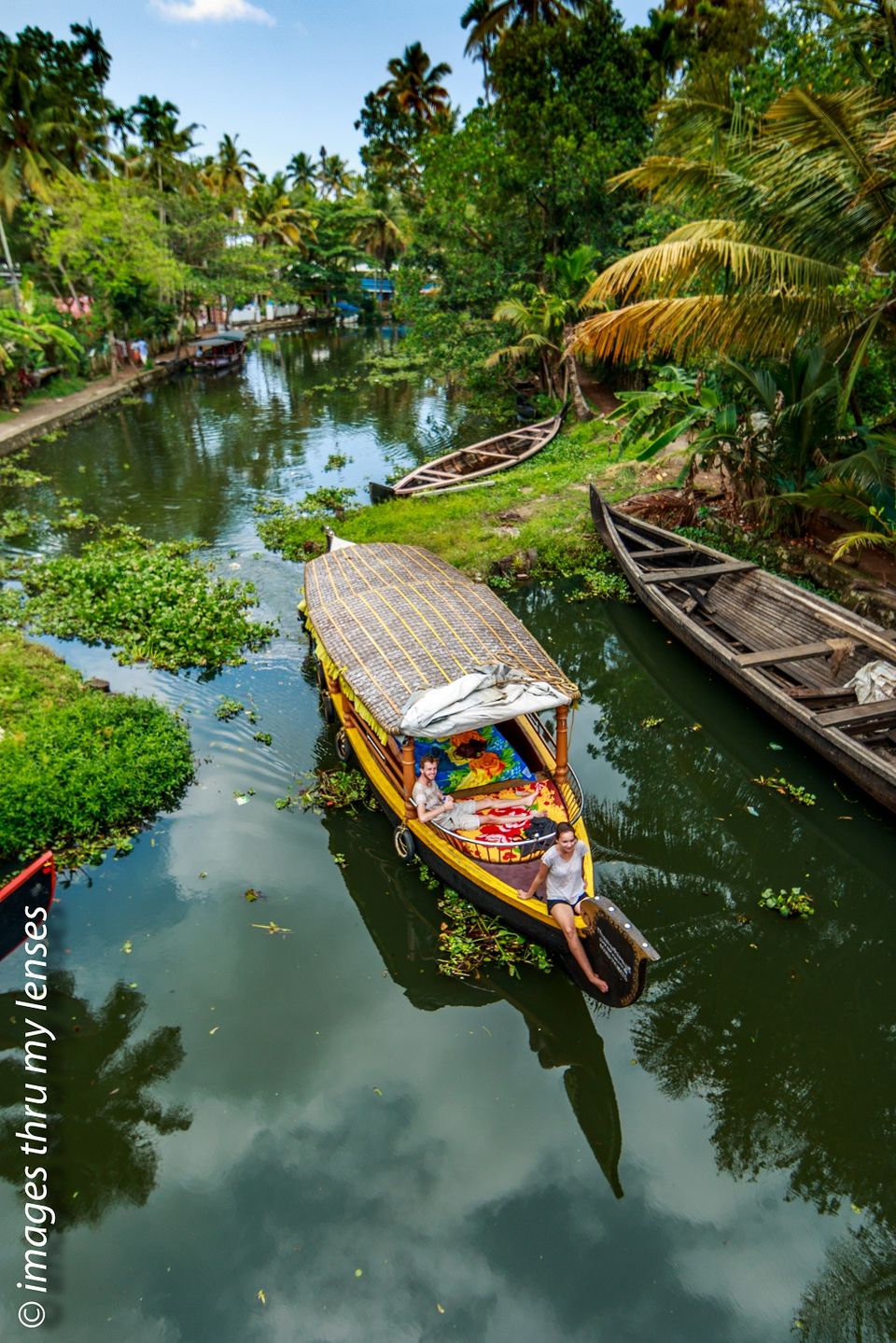 3. The question that was of interest was which place should one select to experience the backwaters, one of the more prominent places is Allaphuza (Allepey) but then when there is only one opportunity to witness the best, it is better to be accurate as to where in Allepey and how to go about it. So, here is my pick of where and how to experience the “Backwater Experience”.

4. Allepey, a town with picturesque canals, backwaters, beaches and lagoons; described as the “Venice of the East” by Lord Curzon himself has a lot to offer to the discerning traveler but I was interested in the backwaters , hence I dug deeper peering in to the large scale google maps to decide which part of the backwater channels would be most captivating .

The glorious backwaters of Alapppuzha 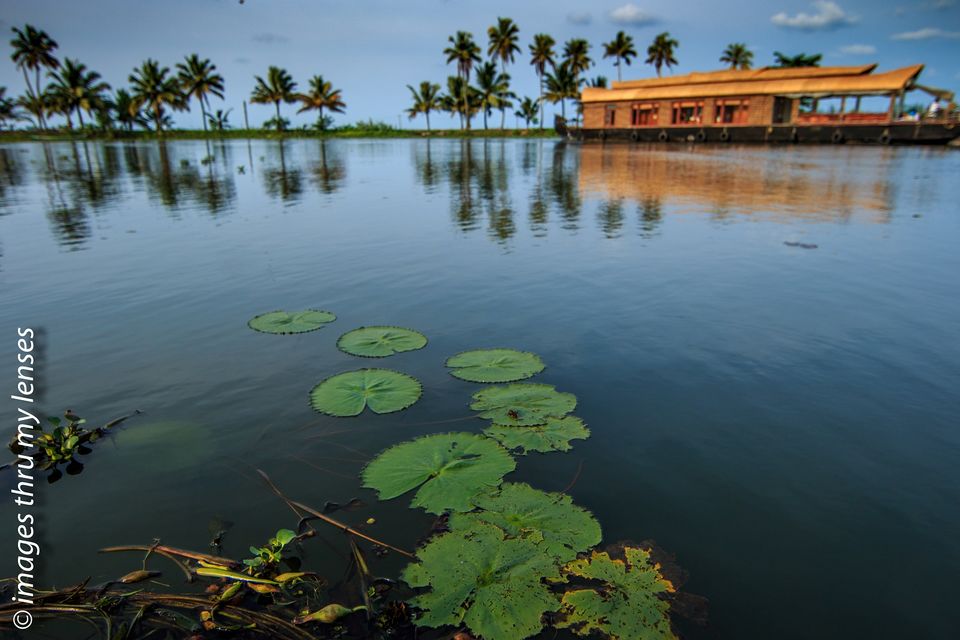 5. Eventually I homed onto Kuttanad , a region covering Alappuzha and Kottayam distt. Well known for paddy fields and geographical peculiarities, the region has the distinction of being the lowest altitude place in India and one the few places in India where farming is carried out below the sea level. Four of Kerala’s major rivers, the Pamba, Meenachil, Achankovil and Manimala flow into the region and the world famous boat race is held out here. 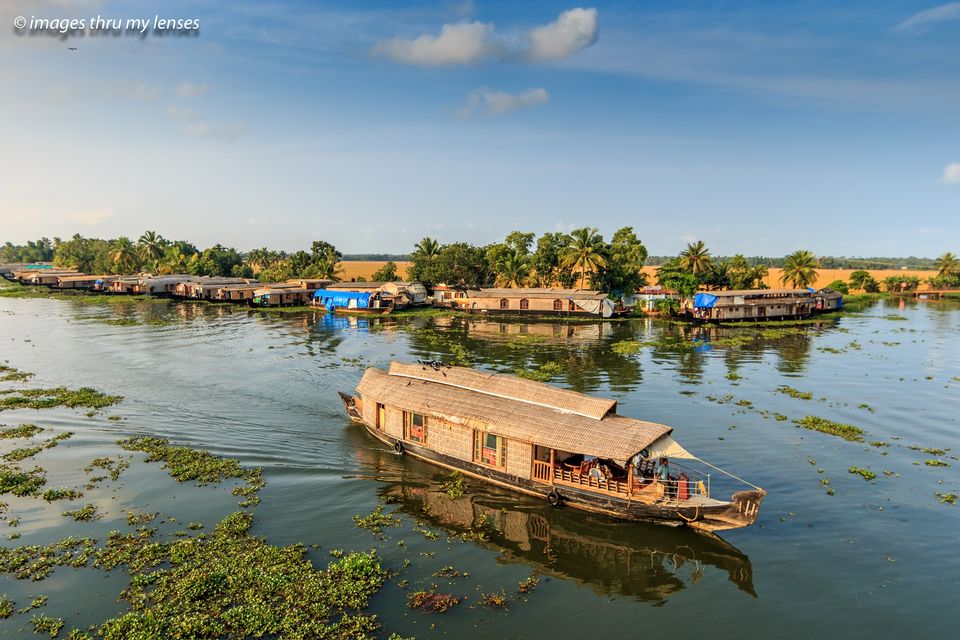 6. So Kuttanad it was to be and having prepared this, a generic idea of what to do once I reach there I set about hiring the services of a taxi for the whole day and get my photographic gear in order. I was only carrying one body and one lens, the Canon 14 mm prime hence was going to use ultra wide lens for all the shots.

7. Kuttand is 70 km from Kochi and the journey early in morning took me an hour and half. My destination was Pallathuruthy bridge which was the gateway for hiring the services of a houseboat/small boat to go into the region bordering Kainakary and Venattukadu Canal. Having reached Pallathuruthy bridge I spent time out there walking along the banks of the Kovalam Kottapurm waterway, it was still early morning so all the house boats were lined up along the canal banks waiting to take the visitors along the canal, seeing the size of these houseboats I was once again reminded of their immense size and immediately decided that this is not what I had mind. I wanted to explore the little used water canals or those used by the locals hence the house boats with their immense size and limitation of the dangers to water hyacinth would not be able to navigate. Anyways for the moment I marveled at their size and design as the world slowly awakened to yet another fine day in paradise. 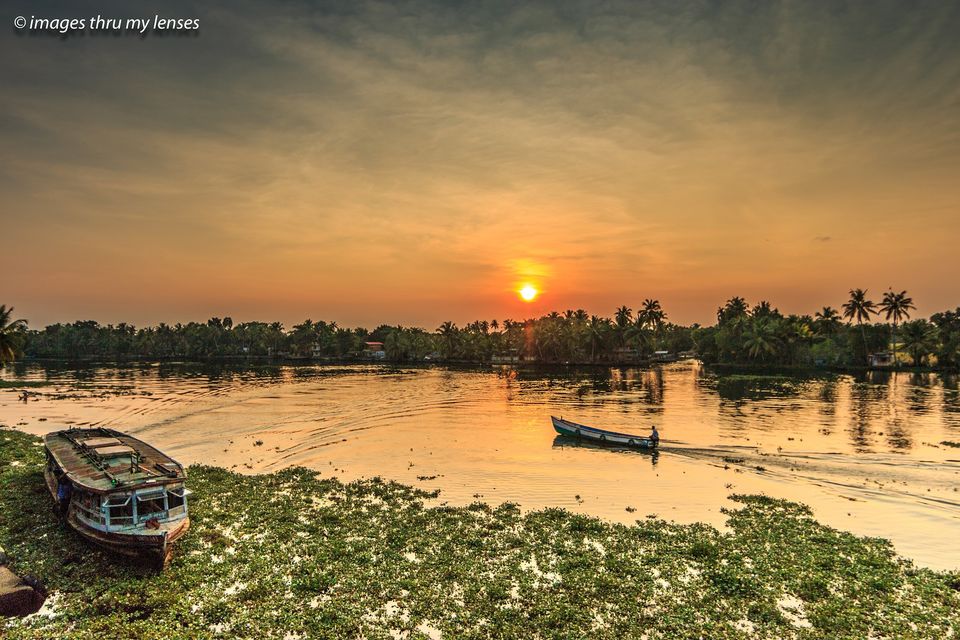 8. After spending some time out along the bank i proceeded ahead on the State Highway and after a km or so just stopped the car and told the driver that I would be back in around 30 min and took off into the rows of paddy fields that were on both sides. The fields stretched in front of me ad seriously I must confess that the joy of walking in serene surroundings with no particular destination in mind is truly exhilarating. The occasional villager was out in the field starting his day as I wandered through the pathways and fields, the sounds of humanity dwindling in the silence and replaced by the sounds of nature . Truly its tough to describe what my senses were being exposed to , a feeling of slowing down of the thoughts and pace of life what the mind and senses are attuned to.

through the ripe paddy fields , its not just the backwaters 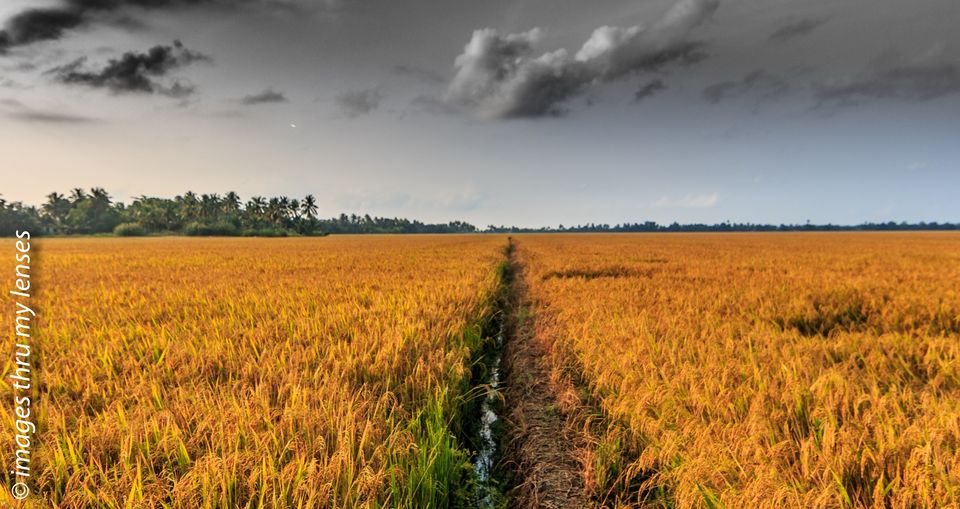 9. After spending some appreciable amount of time I reached back and by the time my driver understood what was going to be the agenda of the day and after consulting some locals he took me towards the nearby Alappuzha – Chambakulam ferry point where I was able to strike a deal with a boat man for services of his small boat for the entire day till sundown. Readers may note that in case one wishes to see the backwaters as they were a decade back one has to venture into waterways that are no longer the domain of the houseboats which can never truly capture the beauty of the backwater.

my ride for the day 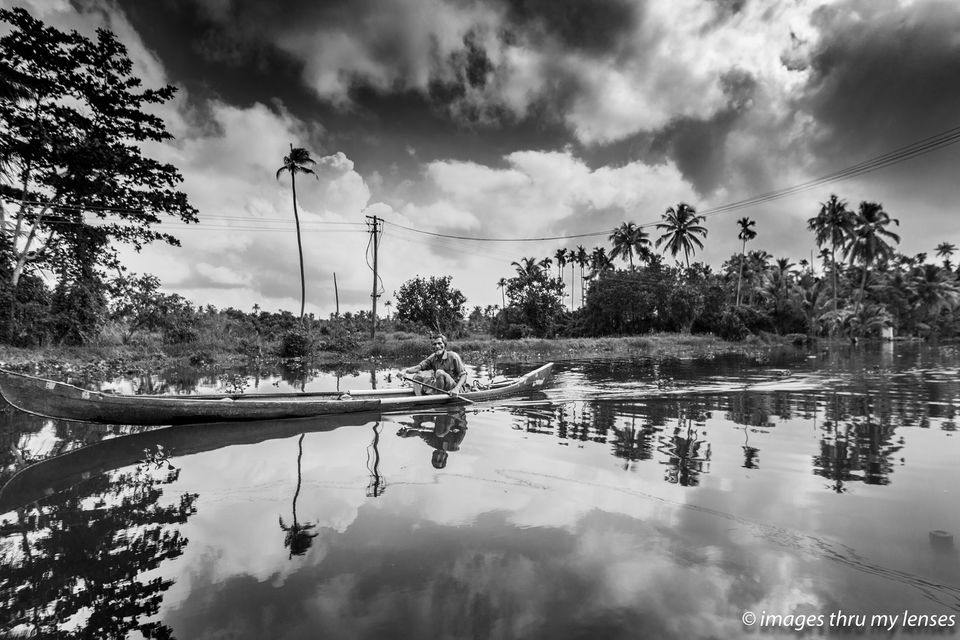 10. So in high spirits we set off, the sun had still not reached the zenith and the lovely morning stretched in front of me as I made myself comfortable and soon we were gliding along to the soothing sound of water rippling along the sides of the boat. Eventually at the end I realized that we indeed cover a wide area as the deal was that we were companions till sun down so onward we went, I had managed to convey in rudimentary English that it was the small waterways that I was interested along which the local folks used to stay and that the main waterways that were used by the houseboat was to be avoided as much as possible. 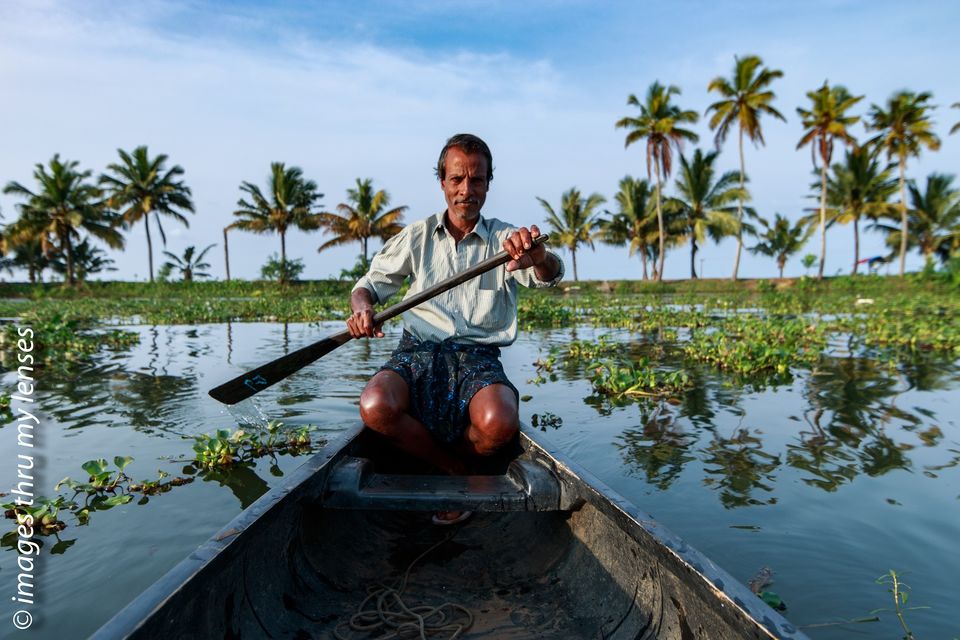 11. So the hours went by as we wandered from one canal to the next past waterways completely covered by the layers of water hyacinth that immediately covered the tracks made by us as if we never existed . It was some splendid moments spent in each other’s solitude company as we tried to get a measure of each other.

through the intrinsic canal network 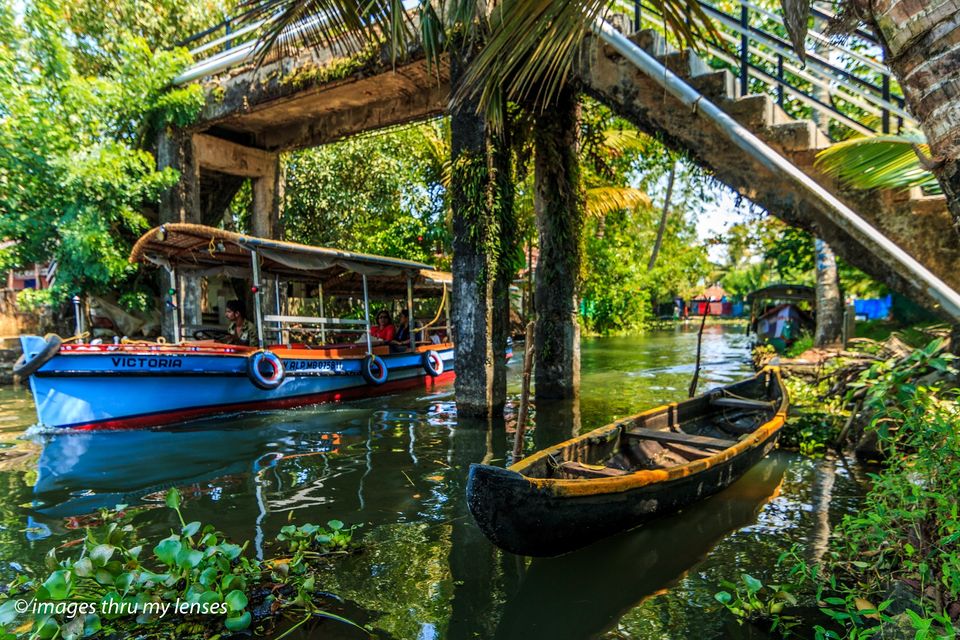 12. Mid-morning he took me to a small waterway and thereafter in front of a local house he put us alongside indicating that this was a stop for breakfast .So we trooped into the local folks house . The smile was genuine and so were the occupants as they warm heartedly made me feel welcome though I understood not a word of the language however with my boat man as a referral I was made comfortable in a short span of time. So soon a simple palate consisting of duck fry and Malabar paratha ( the famous dish of kerala ) was in front of me and I made the most of it . This followed by a cup of tea for a nominal fee was definitely most satisfying, while all the time the lady of the house kept a close eye to see if I needed anything considering that I spoke not a word of the local language. This is how I feel one has to see a place, it has to be a mix of the commercial as well as local aspect with personal interaction occupying a critical place. It was my interaction with the boat man which led me to a local household where I was able to for a short time get a feel of something that the commercial companies can never ever offer.

13. After the breakfast and a bit of lazying around we left and proceeded ahead on our journey of wandering through the nondescript canals . As the sun rose higher we stopped underneath the shade of trees that grew along the banks, soaking in quiet moments of the countryside along the canals. There is life all along the canals , one can see houses , gardens , children coming from school , ladies working in the kitchen , washing clothes , men fishing and on some occasions catching clams from the middle of the canal .The hustle and bustle of a village is omnipresent though what is thankfully not present is the sound of the vehicles or the traffic on small roads , there is a sense of simplicity and calmness that pervades the very soul thereby making a man slow down his thoughts and consequently slow down his speed of life itself . 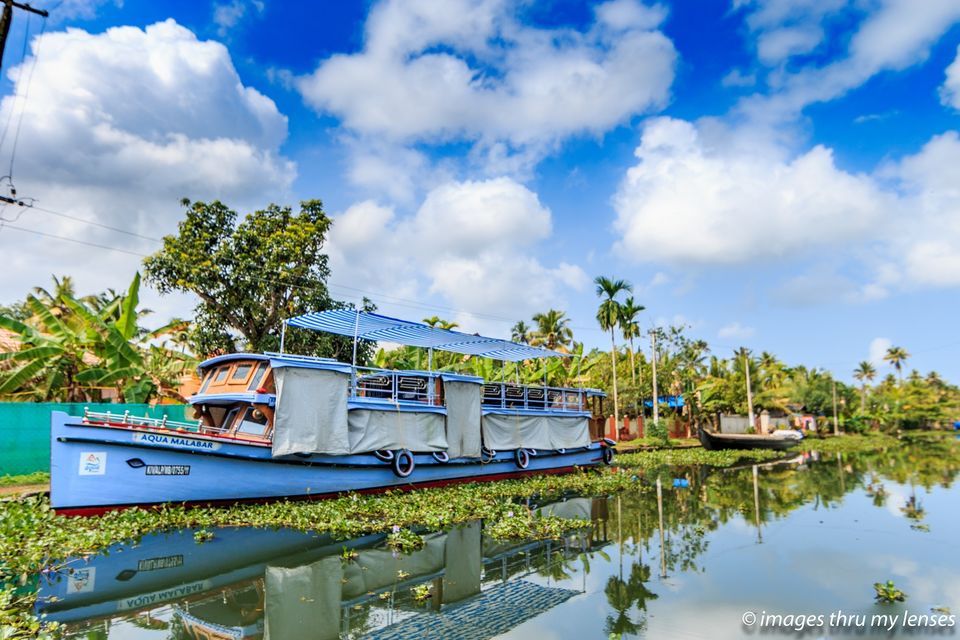 14. In the afternoon we decided to visit a license toddy bar where we spent the peak afternoon away sipping some great stuff along with once again gorging on local lunch consisting of fish curry and tapioca base. Thereafter in the late afternoon it was the same activity as we wandered aimlessly gliding through the water and I indulged in travel photography to my heart’s content watching a story board of how life moved in the backwaters of Kerala. 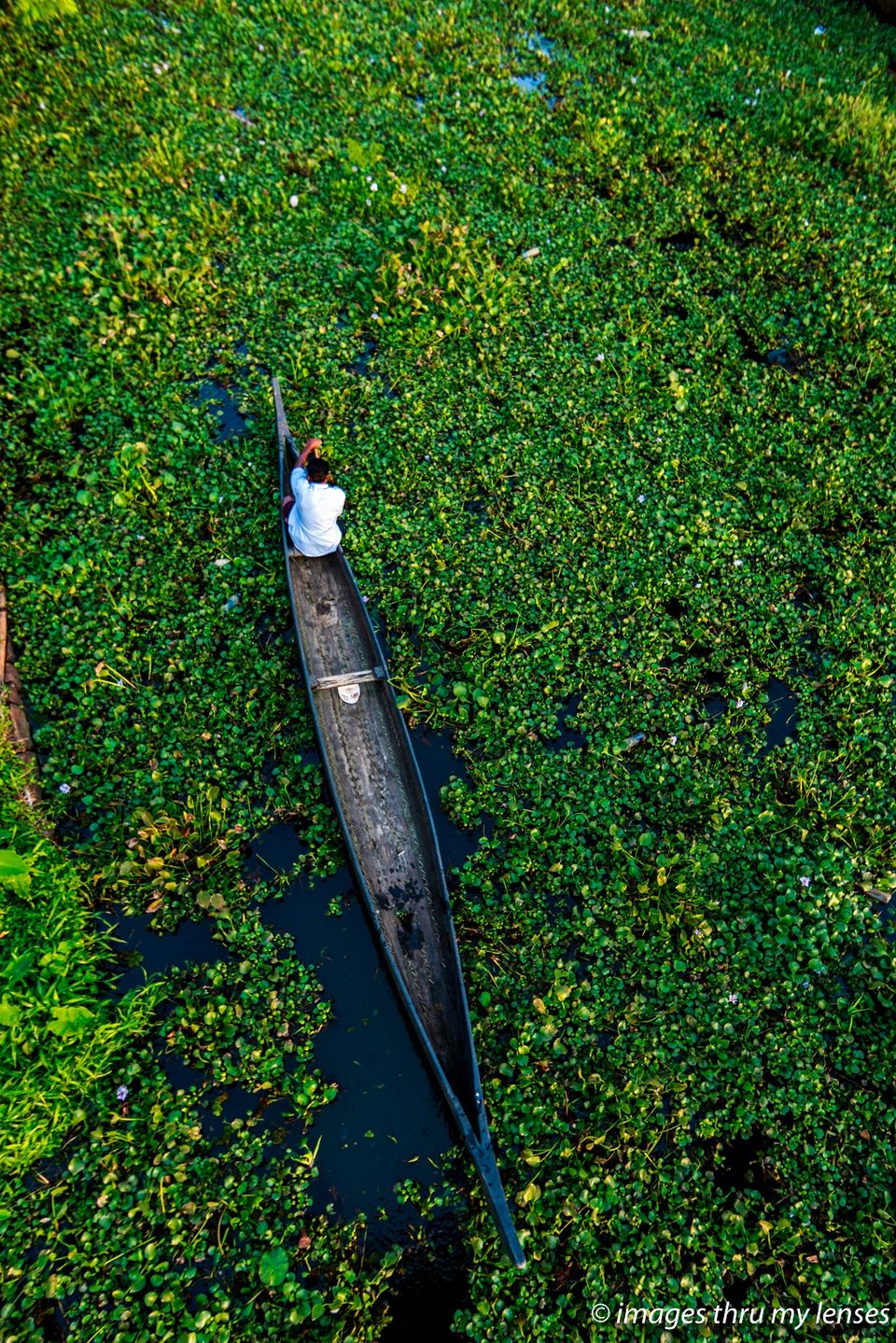 15. As the sun moved to finish the day we made our way back to where we had started from and I was treated to one of the most gorgeous sunsets dotted along the banks , thus ended a great day spent amidst the backwaters of Kerala , which would be cherished and remembered for a long time to come indeed. We bid warm farewell to each other as I disembarked from the boat and for a nominal feel it was a great way to spend a relaxing day. 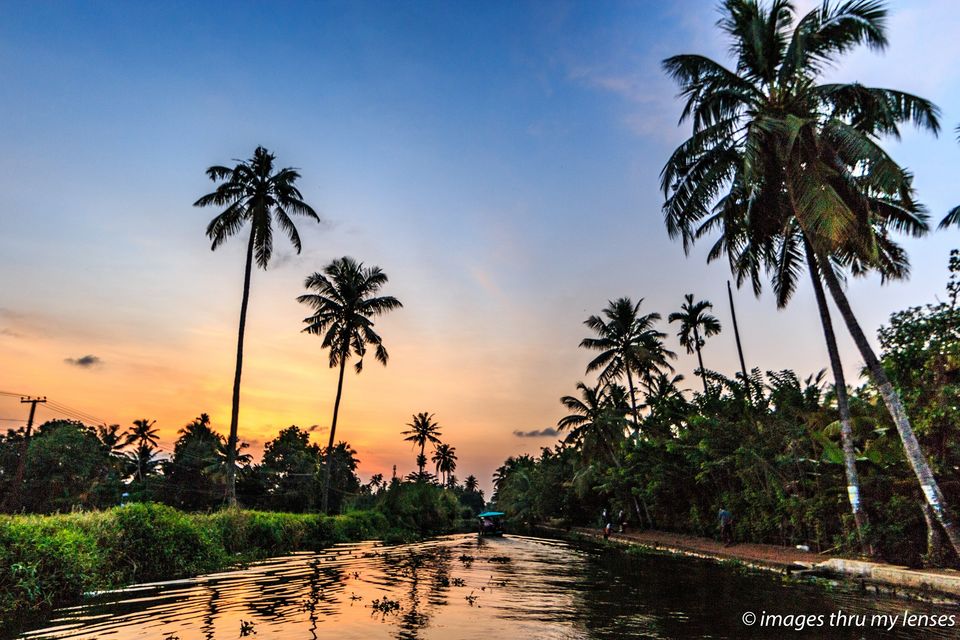 Kuttanad ;Getting there : Use SH 66 from Kochi , book a taxi for entire day

Pallathuruthy :Take the boat from here in order to get a better deal economically

Refreshments :Do not forget to sample local cuisine at toddy shops on the river front