Today, we look at a tiny hill station in the state of Jammu & Kashmir. The state is famous for its Himalayan destinations such as Gulmarg and Amarnath. But little is known about the town of Patnitop. While most Indians do not know about it, the city of Jammu has been considering this little town a getaway for a long time. During weekends, the entire urban population of Jammu can be seen at Patnitop. This pine tree lined hill station is to Jammu, what Lonavla is to Mumbai / Pune, Nandi Hills is to Bengaluru, Shimla is to Chandigarh and Ooty is to Coimbatore / Mysuru. A convenient one-day or a weekend trip to escape the big city. Let us learn more about this town.

Patnitop is a town on the Chainani range. The old highway between Jammu region to Kashmir region passes through Chainani and Patnitop. With this road, vehicles had to ascend to the top of the mountain range and descend to the town of Batote. In 2015, the national highway was shortened drastically as a tunnel was bored through the mountains, such that vehicles go from Chainani to the village of Nashri completely skipping Patnitop and Batote. Suddenly, the highway between Jammu and Patnitop got quieter, since the vehicles proceeding to Kashmir had no reason to take the winding hilly road.

So Patnitop became a destination unto itself, mainly as a getaway for the urban, affluent families of Jammu city. To the north of Patnitop at the base of the mountain range is the town of Batote. The Chenab river flows in a massive rapid just beyond this town. The river can also be seen from a vantage point on the hills of Patnitop, along with the Baglihar dam and hydroelectricity project.

While agriculture, cattle and horse rearing is the main occupation in the Chainani range, Patnitop has grown into a town that caters to tourism. The local population here owns hotels or restaurants or works in them. During off-season, most people move to Jammu or Udhampur for work. Patnitop has a healthy mix of people following three religions. Hindus are the majority, while Sikhs and Muslims are also in sizeable numbers. Most hotel owners and business community are Sikhs. Hindi and Punjabi are the most widely spoken languages at Patnitop. In fact, this can be said for all of Jammu region of J & K. If you happen to drive in from Punjab's Pathankot to Jammu, you will hardly notice any change in language or culture. Only a checkpost lets you know that you are in Jammu & Kashmir. The whole of Jammu region, including Patnitop, seems to be an extension of Punjab.

Let's look at the places to see at Patnitop.

This is the main tourist spot in Patnitop. It's a large grassy area bordered by pine trees. The park has children's games, horse rides, inflated swimming pools, several sit-out points and selfie points. The idea of this place is to totally relax on the grass with your family. This is exactly what Jammuvites do. This places is filled with people from Jammu. But the park is still humongous enough so that you can find your own place of privacy and peace and quiet.

The open grassy lawns at Patnitop bordered by pine trees. 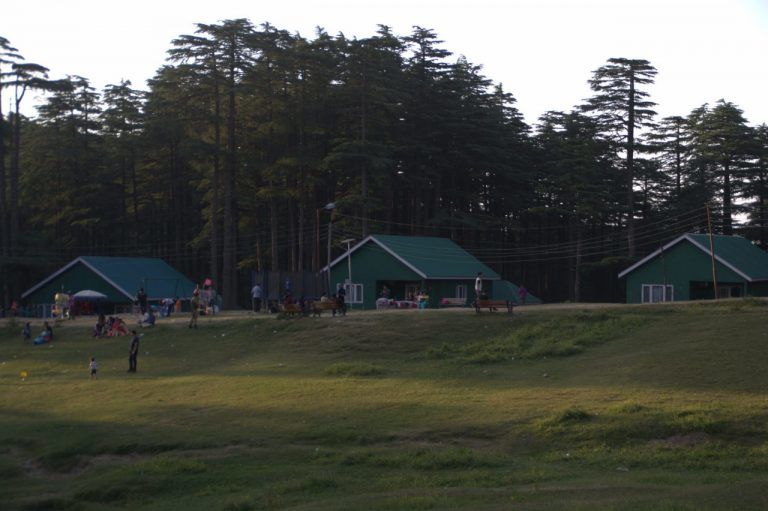 There is plenty of space to go around for everyone. If grass is not your thing, then you can go running around and posing behind the tall pine trees Bollywood-style. For those who want a luxurious stay inside the park, there are 1-room, 2-room and even 3-room (highly expensive!) wooden cottages inside the park. These belong to J&K tourism and you can book them online. The 3-room cottages go for 5-figure rates for a night!

Children frolicking in a giant inflatable pool at Patnitop park 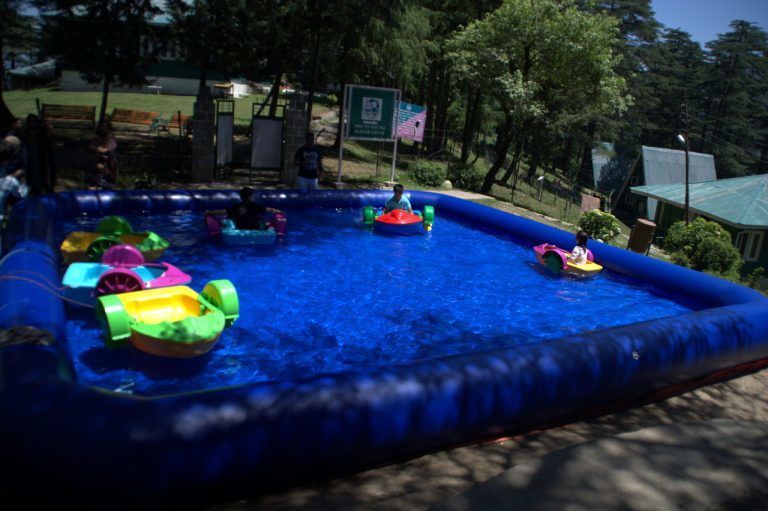 While Patnitop park is at a higher altitude, the Patnitop market is at a lower altitude and can be considered the heart of the town. You reach the market first before reaching the entrance of the park. There are several handicraft shops in this area. But the thing that interested India 360 was Kladi Kulcha. We will talk about Kladi Kulcha in the section 'what to eat'.

One of most unique dishes in India is made right here at Patnitop. It is called Kladi Kulcha. Although considered a speciality in the whole of Jammu region, we never saw it before Patnitop. Nor did we see it after. We saw at least 5 stalls at Patnitop market selling this speciality. Kladi Kulcha is actually the name derived from two terms. 'Kulcha' or 'Amritsari Kulcha' is a special type of whole wheat bun that is famous all over Punjab, Haryana, Delhi and Jammu area. It is so much loved in this area that it has spread to neighbouring Uttarakhand, Himachal and Uttar Pradesh. The bun is soft, but is roasted over ghee and turned crisp. The bun is usually stuffed with or served alongside chhole or potato tikki. However at Patnitop, Kulcha is served with Kladi, a cutlet or patty made of pure cheese.

The two roasted buns on the right are the very popular Kulcha. Kulcha is very popular in Punjab, Haryana, JK, Delhi, Himachal and Uttarakhand. However the two round pieces at the left are a speciality of Patnitop. ‘Kladi’ is a patty made of cheese 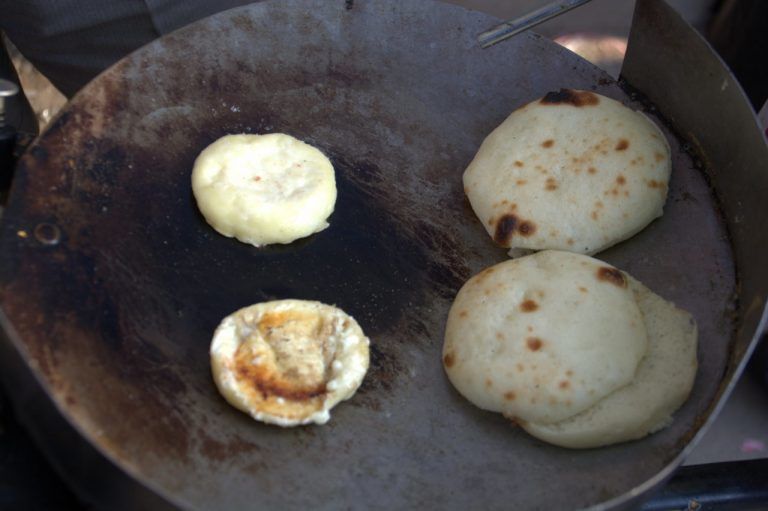 The cheese is denser and fattier than regular cheese made of cow milk. This is because the cows and buffaloes in J & K are of superior breed and their milk is also richer. Roasted Kladi is stuffed inside roasted Kulcha, along with roasted onion and chillies. The combination is then dipped in ketchup or chutney. We enjoyed Kladi Kulcha for breakfast and as a snack during tea time. So much did we love Kladi that we have incorporated Kladi sandwich as one of our breakfast items at home in Mumbai.

What (not) to buy

Patnitop isn't a huge shopping destination. We suggest that you to go on a dry-fruit buying spree in Jammu city, either before or after your visit to Patnitop, depending on your direction of travel. There are a few handicraft shops in Patnitop market. But Patnitop is generally a costly touristy place and we recommend buying those same items at Jammu city's Hari market. In this post, we actually warn you against buying a particular item at Patnitop. This stands for whole of Jammu, Kashmir and Himachal as a matter of fact. Vendors will try to sell you a blanket named 'Chingu'. They claim that the fabric is made of the feathers from a rare bulbul (songbird), an endangered species. They tempt you by saying that the Indian government will ban the item soon and that you could have a rare piece. They quote exorbitant prices like ₹ 9000 - 10000. We were having none of it. If the bird is endangered, then it doesn't make sense to encourage the trade anyway. Secondly, the blanket is made of soft wool and not feathers. So the whole thing is a scam. Long story short: Patnitop is not a place for shopping, nor for active sight-seeing. Just enjoy the ambience and the clean, fresh air.

Patnitop is place where you just relax in the long expanse of grass or in the colourful shadows of pine tree. It is a place where you walk for a long time among the many foot trails or better yet, use your bicycle. Two days in the beautiful, clean environment of Patnitop is sure to recharge you.