Almoda- Be like Chandani, and your wanderlust attitude will win over you... 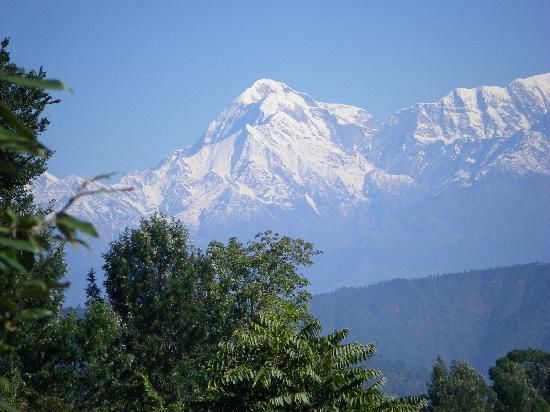 A story of primary school days, I had never thought that it could be real also, that time I was under impression that all the characters are fictional as the story is. But No, A 4th standard story which I still remember was all about the liberty, Carefree, curiosity to decode every question, being a wanderer, wish and passion to see beyond and sense freedom. Today I realize that every word of the story is true including the place though the story and characters were make-believe.

"Abukhan was an old, lonely man living in the village of “Almoda” in the foothills of the Himalaya Mountains

He would keep one or two goats at a time and spend his time walking with them around the village and farmland.

At night, he would tie the goats with a rope in his yard.

One after the other, in matter of days he would lose the goats as they would run away into the mountain and be killed by a coyote.

Finally, he got tired and decided, no more goats! I will spend the rest of my life without any goat, he thought.

A few days passed and he was very sad and lonely without the goats.

Yes, he went and bought a very pretty little goat and named her “Chandni” (meaning “moonlight”).

He thought if he gave her nice feed and grains and showered her with lots of attention, this one won’t run away.

But sometimes he felt that the goat was getting bored. Time to make her life more interesting.

They bonded so well that they could as if talk and understand each other like human beings. Abukhan was really happy that this goat was a keeper and would never run away.

Secretly she was longing to go up the mountain. He knew this because he had seen her gazing in that direction for hours. She was definitely more restless.

And then she started eating less and less. She wasn’t happy to be confined in that farm – as big as it was, it was no longer big enough for her…

All of a sudden the rope around her neck felt like a noose. She’d gaze at the top of the mountain and think the air there must be so fresh, the scenery from there… the greenery around there…  the smell of freedom and here I am confined in this small, pitiful little farm… Yes, Abukhan is nice to me but mountain is calling and I have heard the call now…

She kept looking at the mountain all the time. She was smitten. Nothing else would make her happy.

Abu talked to Chandni everyday telling her that it is not a good idea to go to the mountain. There are dangers and a certain death. What more can I do to make you happy? Longer rope? Better feed?

Nothing seemed to work. Finally, Abu told her, if you go to the mountain, coyote will surely kill you. How are you going to fight him?

Abu said your horns are no match for the coyote. I just can’t let you do this.

Abu said to himself, this is it. Chandni must not be kept here in this field. It is time she is put in the cabin on the farm with the door locked.

That afternoon Chandni was taken to the cabin and the door was shut and locked.

Little did he realize that the back window of the cabin was wide open. Well, that was the opportunity Chandni was waiting for.

Night fell and Chandni escaped running straight to the mountain.

She reached there and the smell of freedom… Her beloved mountain… she was finally there… all that greenery.. So much to eat… so much to see… so much to enjoy..

She enjoyed herself beyond her wildest dreams. Ever so slowly heading towards the top of the mountain. She had enjoyed a few days of freedom.

She was re-invigorated, she felt young again and there she met a herd of other mountain goats. They welcomed her in their herd. They roamed together for a while. A male goat even showed some interest in beautiful Chandani, even she felt the attraction. But she didn’t want to jeopardize her freedom being tied to a life in a herd with other goats.

She was a true free spirit. There was no time for emotional attachment. She had to go her own way wherever her heart was leading her – to the top of the mountain.

But Chandani was a smart goat. In her new found life, she was still ever so vigilant of the coyote. Goats in the herd didn’t have to remind her. The encounter was destined to happen at any moment.

And came the dusk. Cool breeze felt ever so pleasant on the skin. In the valley she could see the village and Abu Khan’s hut, his yard, the farm and the cottage. It looked wonderful from far away…

In the distance, she even could hear Abu’s pleas for her to return home. For a moment, she felt maybe she should return, but then she remembered the rope, slavery, dependency and her life there – may be more comfortable, but certainly not as sweet as this freedom. Whatever the price – she couldn’t – she wouldn’t give up her newly found freedom

She is deep in thoughts as she heard some noise in the leaves behind her… yes, coyote was closing in on her… Should I run down the mountain and back to loving Abu Khan or face this deadly encounter!!

The decision was made in a split second. She chose to fight and die rather than live in comfort of Abu’s home and rope tied around her neck

She saw the coyotes shiny eyes in the darkness. There was no other option left. Coyote gave her a look as if saying, Oh, here we go again. This one looks like Abu’s well-cared for goat. They have all been special and delicious and such easy kill…

Chandani kept her head down, straightened her horns and in a split second charged straight to the coyote at lightening speed and bam!! Smack into him…

Coyote didn’t expect this, he had never been attacked like this before by a goat! Yes, this was an attack…

He was truly taken aback. In a moment, he regained his balance and composure and the fight was on..

As the fight went on, Chandani was gradually losing ground, but earned a healthy respect of her opponent. Coyote has never had to work so hard to overwhelm a goat prey.

Chandni was bloodied but kept on fighting. The dance of death went on into late night. Stars were disappearing one by one in the sky. Dawn was about to break thru.

She was taking her last breaths. She fell to the ground. A moment more and it was going to be over. Million thoughts raced thru Chandni’s mind. It was over… Ground was bloodied… Chandni had taken her last breath but in freedom. Fully aware of this outcome as the final price. She did have a smile on her face as she lay dead.

Up on the tree, a whole group of birds were watching this fight almost since it started. Coyote won the general consensus declared. Said “No” an old bird, “Chandni is the winner here.”

Outcome - It is a tale describing that for the self-aware, freedom must be the ultimate goal. No matter how nice the accommodations are under the oppressor, one will always wonder and always be drawn to freedom.The desire of the sheep to fight against the coyote despite knowing the eventual outcome shows that freedom is worth any cost, even one’s life.

now as you red the entire story some of you might be in question, why i shared this story here ?

so the answer to this is - From last few years I started travelling and exploring places, i heard or i want to see, and there are lots of things which makes ones traveling wish handicap, but if you succeed in escapaing from this fence of problems, note my words you will end up achiving a bliss, or may be with some thing that you have never experienced of ever.

Even Swami Vivekananda said about Almoda "These mountains are associated with the best memories of our race: Here, therefore, must be one of centres, not merely of activity, but more of calmness of meditation, and of peace and I hope some one to realize it."

And last but not least this story stands as prime reason behind my wish to visit Almoda someday and i dont know what will be my feelings afetr i'll be at Almoda, a place from my primary Balbharti book .......

# Message me for any kind of changes and improvement to my writing and infos provided. Suggestions and Critics are loved & hearty welcomed anytime, and if you liked it please hit the Little Red Heart. it boosts me.