Insight of the first city of Delhi (lalkot): Qutub Complex 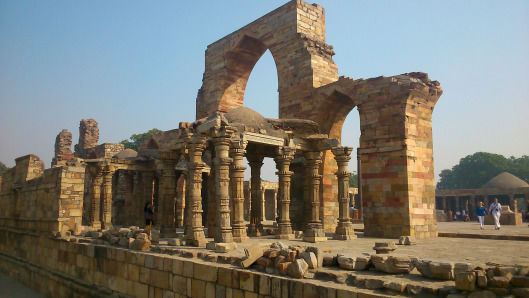 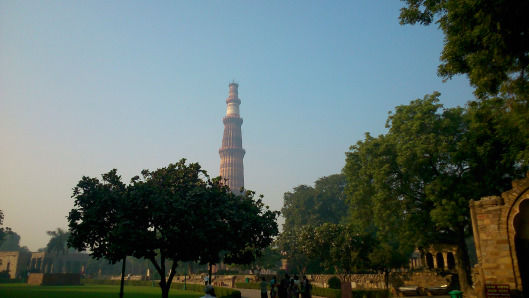 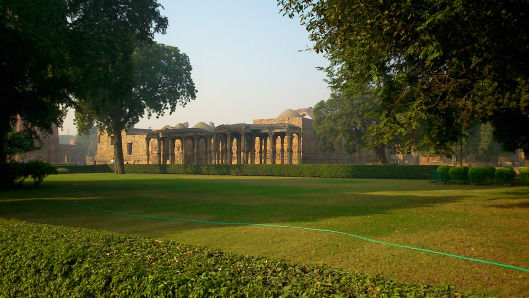 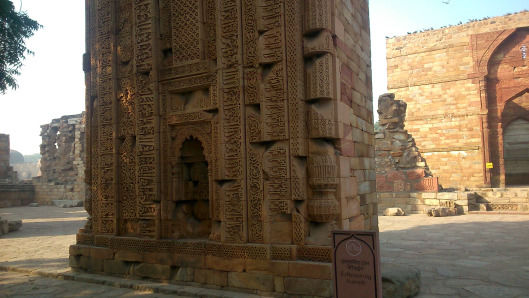 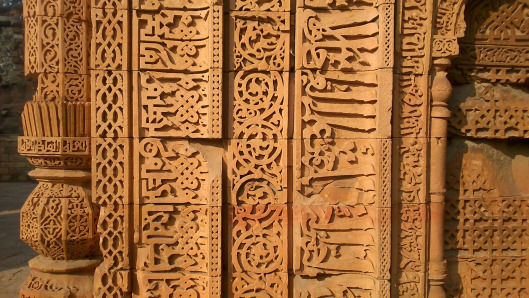 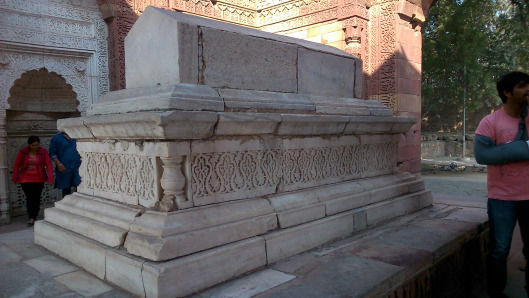 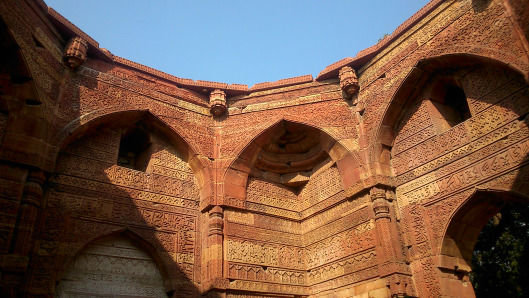 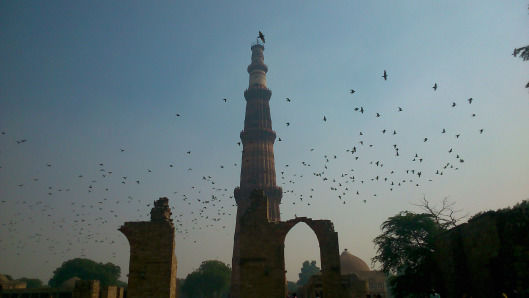 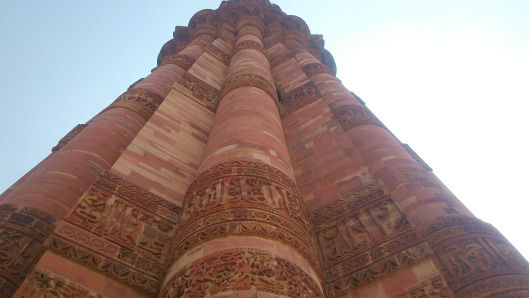 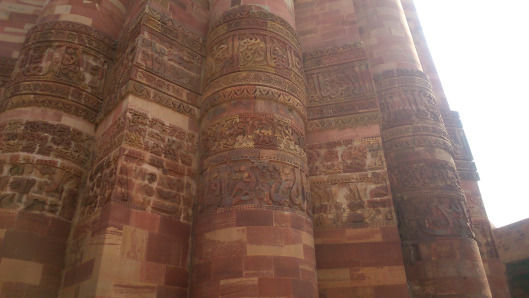 The winters has just knocked on the doors and Delhi is all set to be an admirer’s and explorer’s bliss. It is the perfect time for exploring the unending treasures of the capital city. Even I started blogging around same time last year and it’s been a good year for both travel and writing. For some time now, writing had taken back stage due to the perpetual run for livelihood. However, with winters on the doors I’m once again inclined towards my love for travelling. During the last one year, I have met several people and groups who have a great zeal for their passions (whatever they may be) and one such group is Delhi Karavan. I have done several “heritage walks” with them unraveling some untold stories behind some well-known monuments of Delhi and some lesser known monuments too. It had been a while that I attended any of the “heritage walks” with the group.

So this Sunday, I joined them for a walk at the famous Qutub Complex in Delhi. Although, I was little upset with the early morning timings but later it proved to be a right decision as the crowd began to pour in huge numbers. Betraying the morning zizz, I reached the complex little late and by that time Asif (story teller of Delhi Karavan) had already begun with an old map of Delhi explaining about various medieval towns (Shahjahanabad, Tughlakabad, Mehrauli, Siri etc.) that Delhi had been home to.

Since we were strolling through one of the medieval cities of Delhi i.e. Qila Rai Pithora or Lalkot, therefore, the discussion mainly gyrated around it.  As we walked through the foyer of the remnants of the first city of Delhi, the towering Qutub Minar begun to appear behind the trees. It stood tall in middle like it had been for last 800 years. While I gazed at the Qutub Minar, the pages of our NCERT history books flipped in my mind. During those days, we hated it and often termed it as boring but it didn’t appeared boring at all now. The Qutub complex looks lovely with its lush green lawns and monuments scattered all over.

Asif, the story teller, eloquently unraveled the lineage of Delhi Sultanate accentuating on Qutub-ud-din- Aibak and Iltumish, the pivotal pillars of the “Slave Dynasty”. The discussion were coupled with several anecdotes which made it more lively and much more than just “history”.  The historical tales of why “Aibak” was added to Qutub-ud-din’s name (“Aibak” arises from word “Aib” meaning a defect/flaw/imperfection. It was added to his name as he did not had one thumb) , the wisdom and benevolence of Iltumish, the utter faith of Iltumish upon his daughter Raziya Sultan, the speculative love episodes between Raziya Sultan and Jamalulddin Yakut kept everybody engrossed and glued to the discussions.

With discussions on full swing, we reached the tomb of Sultan Iltumish. Outside the tomb there were many disintegrated leftovers of the tomb precincts. Even though they might have surrendered to the lashes of time, they still had some beautiful engravings carved out of stone which was just an iota of its original magnificence. The craftsmanship and skills of medieval architecture in absence of any modernized tools has always left me perplexed. I entered the tomb only to find more magnificence of medieval artisans. The walls of tomb were carved with elegant textures, designs, Quran verses,all over and the perfection was still visible after 700 years. The grave of once the Sultan of Delhi was now the famous photographic spot for couples, tourists and people like me. Many of them even didn’t knew who lies under that marble grave.

From the tomb of Iltumish, we sauntered further and was standing in the huge porch area of the Quwwat-ul-Islam mosque which was also one of the premier educational centre of those times. The view of the Qutub Minar was much clear from this point and on the left were the residues of old Hindu and Jain temples. The azure skies were perfect background for Qutub Minar. At frequent intervals, the native pigeons flapped their wings and took two-three circular rounds of the complex before settling down. It was a spotless photographic moment and even the DSLRs, mobile cameras didn’t miss the opportunity.

We went closer to the Qutub Minar and its loftiness began to appear. Its height increased at voluminous rate. In spite of being aware of its height, the feeling of seeing it for real was completely different. The architectural style of the “minar” has both Hindu and Islamic elements. The “minar” is circled with decorative motifs at each storey giving a distinctive flavour. The exquisite calligraphy all over the “minar” is comparable to none. It was much more than just a sign of victory or watch tower. It was an infusion of Indo-Islamic-Afghani cultures and a mark of perfection.  Although it was commenced by Qutub-ud-din- Aibak and was completed by Iltumish but it has always adapted to the changes. The two storeys in white marble were added by Firoz Shah Tuglaq after it was damaged by lightning. Thereafter, also it has been subject to many alterations.

Many rumours such as elephants climbing up the minar, minar having seven storeys etc. were completely set aside by Asif. May be those have been created to keep its glory alive. Many other anecdotes such as Metcalf’s (a British resident) daughter climbing up the tower to eat mangoes kept the discussion exciting.

The last thing on the complex which lured our attention was the renowned Iron Pillar. It’s a simple 7m tall pillar with some inscriptions in Sanskrit, Urdu, Arabic etc. The USP of the pillar is the fact of being rust proof for almost 1600 years.  It’s a testimony of the high level of skills of ancient Indian iron smiths. The pillar has been subject of various high level research studies by premier Institutes all over the world but it still remains a mystery. I simply gazed at it- it was black but didn’t show any signs of rust. Neither had it looked 1600 years old from any angle. There was a dual feeling of proud (for our ancient Indian knowledge) and inquisitiveness (to understand its rust proof character) sailing in my mind.

The walk through the first city of Lalkot was truly an interesting one and we didn’t even realized that we spent 4 hours in the complex. It was evident that the storyteller had all the strings on his fingers and kept everyone fastened. The “heritage walk” gave a resurrection to the travel bug in me and maybe I’ll set out more to explore “saddii dilli” (our own Delhi) more frequently.

This trip was originally published on Rediscover Your Dreams.