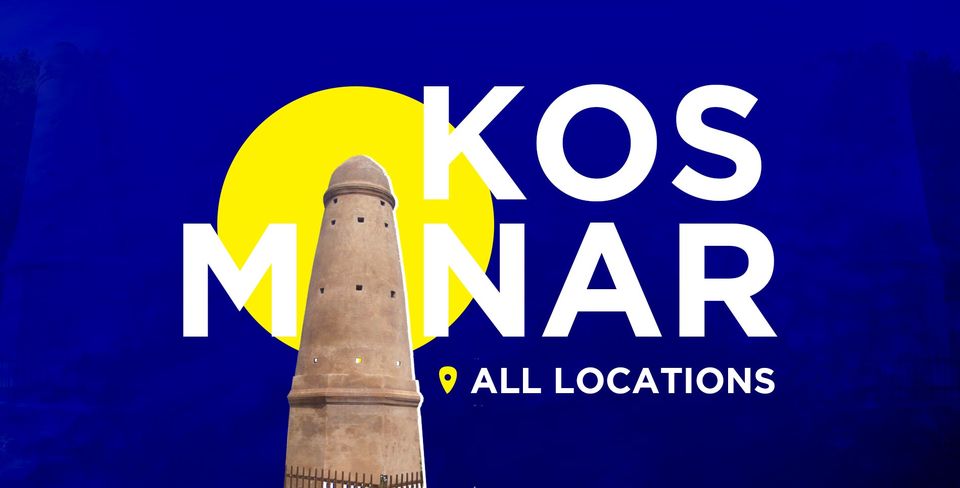 Since I’m a history nut naturally I became extremely curious when I found out about these medieval towers. Kos Minar might sound such a strange name but I automatically knew what they meant as I was familiar with the word Kos. Most of these are destroyed, I believe that’s because just like today we simply neglect milestones because they are very common and do not appear to be something to be looked after.

Another frustrating and interesting thing about these minars was that the route that they represented is not available anywhere on the internet. I’ve emailed to the authorities, talked with historians, and to one friend who’s an archeologist. It took me over a month to fully compile the information. which I had received from all of these mentioned sources, and to come up with roughly a route that these minars were actually built upon. I’m glad I was able to retrieve most of this information as it will allow other history lovers like myself to be able to fully understand and appreciate these minars. But at the same time it hurts me to write it as well, that no proper records have been compiled of these so far.

After years of neglect and natural degradation these pillars appear more like chimneys that have been thoroughly used and abandoned, to an untrained eye it would appear identical to the chimneys present in brick mills just smaller. However, one cannot deny its phallic appearance and wonder what exactly was going on in the mind of the chief builder or even the rulers of the time. Speaking of rulers, these structures were constructed on the order of Afghan Ruler Sher Shah Suri in the 16th century and later more of these milestones were erected, yep, I’m using that word, by following Mughal emperors on the side of what can be described as the highways of the ancient era. As for this vulgar structure, it stands about 30 feet tall and is shaped like a cone which is domed at the top. Though not architecturally very impressive, for something that represents a set distance, they were an important part of communication and travel in such a vast empire.

While some of these can be found within cities and villages most of these are present along the Grand Trunk Road in the northern Indian subcontinent. Funnily enough, the Grand trunk road is made by drawing a hypothetical line at the route of these towers.

It is said that during the Mughal reign over 600 of these minars were established in the present India (records Abul Fazl in Ain-e-Akbari), but now only 110 are left.

Additionally, these towers were split into three distinct categories where each of them had different surroundings.

1. First ones : were the barebone structure which provided nothing but the information of the miles and worked as a landmark.

2. Second structure : was an upgrade as it was surrounded by some facilities that would be required by travellers.

3. Finally, the premium kos minars which were mostly used by the royal travellers as these provided ancient forms of inns, step-wells for fresh water, mosque including idgah, police station, post office, and all the important facilities a traveller could possibly need. Plus, measures were taken to ensure their safety however, no sign of these areas can be found today.

While most of these are damaged we can see and understand the architecture of these towers from the ones located in Faridabad. Though I have yet to visit this particular minar in-person, from the available images online it seems to be the one kept in pristine condition. This particular minar was built under the command of Jahangir, and by the looks of it, it seems to have a tapering structure resting on a platform that seems to be octagonal in shape and separated by a band. Overall structure is made of tiny bricks covered with a coating of lime plaster. While these represent a mile and most of these are made in a similar fashion somehow all of these are different.

As ancient India included countries like Bengal and Pakistan as well in the past the geographic span makes for nearly 3,000 km of Mughal highways, accounting for nearly 1000 Kos Minars; one Kos minar roughly 3075 metres and 1.91 miles in Imperial units. There is no record as to how many of them have survived.

As mentioned previously some types of these minars were used as resting spots for travelers and offered a steady supply of drinking water. In addition to that these minars also served as vital communication posts; a drummer and a horse-mounted soldier were deployed at some of these towers who used to deliver Furman (royal orders) efficiently. This became crucial during the time of war in order to quickly spread the word and during the peaceful times these soldiers would spread royal decrees. In the modern world, historians regard these towers extremely significant. As they claim that if it was not for these minars finding the route created by Sher Shah Suri in the 16th century wouldn’t have been impossible, by the way that route was approximately 2600 kilometers long.

You wouldn’t believe just how long these minars were spread out, as their route was from Peshawar to Bengal and it even reached down to Madhya Pradesh. While their route in the modern world may seem unnecessarily long but during those times it was more like an expressway.

Now talking about numbers for specific locations is a tough task, because as mentioned most of these are destroyed and don’t have much record about them. However, if we look into the reports of the Archeology Survey of India, there are 49 surviving towers in the state of Haryana and Ludhiana, a city of Punjab has 5 remaining minars. Other states have remnants of these minars as well but they are either damaged or under the process of restoration. For instance, the 9 minars in the city of Mathura that have been restored since 2018.

They are not Identical, it depends on locations and time of construction and repair.

I made a spreadsheet after some intense research and tried to track down all the locations of the minars in a google map to get a clear ideas how it resembles with out Great Trunk Route, Hope this list helps enthusiast like me to get a better picture clarity

Spreadsheet Links with all references -All Kos Minar 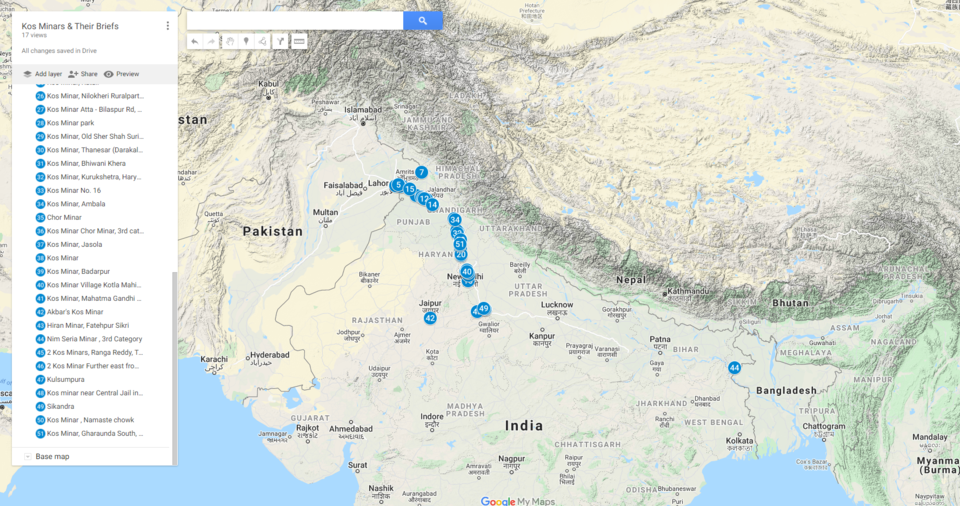 With this available information, I'm looking forward to have suggestions of your on this topic and hoping we will get deeper insights for further research