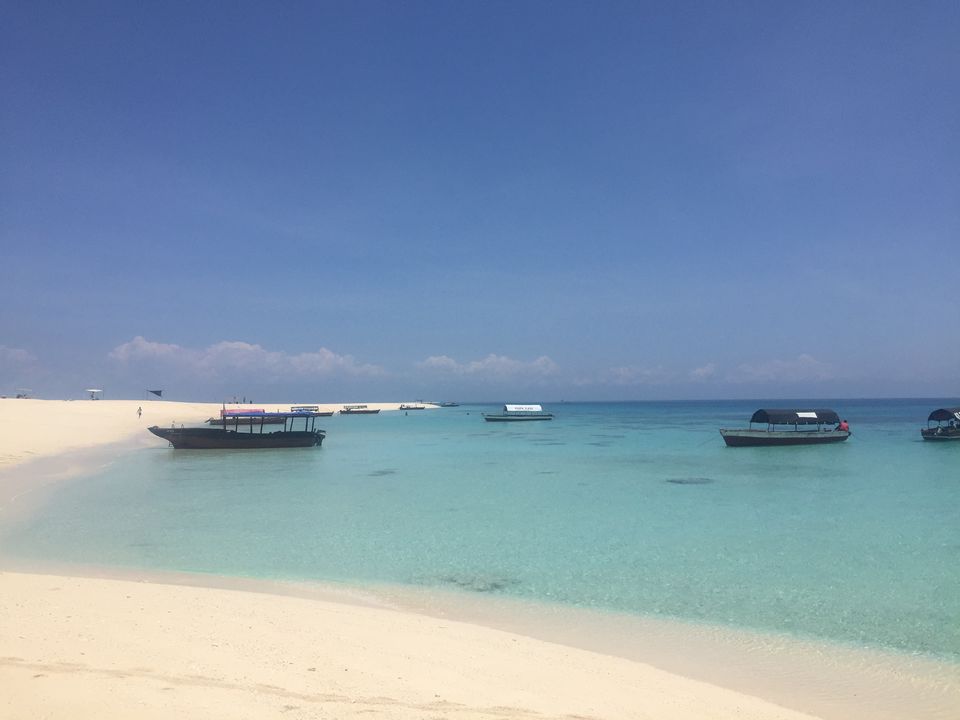 Shew this post is going to involve me repeatedly telling you how totally amazing Stone Town is and rambling on and on about just how cool it is. Believe me it really is cool. My stay there, albeit a brief one, marks the start of a love affair. Stone Town, like the rest of Zanzibar is nothing short of a total assault on your senses. Visually its arresting. There is something quite surreal about walking along the beachfront with the turquoise blue ocean on one side and the old historic buildings on the other. The place is loaded with history and the old part of the town remains largely unchanged by time. It’s like stepping back in time. I almost expected to see famous explorers like Livingstone or Stanley come sailing into the old harbour at any moment. This is a place where you will find old colonial buildings and bustling food markets. Where screaming school children will run past you in traditional dress and dinner literally is whatever the fishermen caught that day.

I was quite pressed for time but here are some of the highlights of my visit. There is a variety of accommodation available but no matter where you are staying a trip to Stone Town wouldn’t be complete without a sundowner at Africa House. It really is the perfect place to watch the sun set. This is a rite of passage for anyone visiting Stone Town for the first time. From the terrace you have a magnificent view of the ocean and you get to see some of the dhows sailing past.

After a sundowner at Africa House a brief walk along the harbour will take you to the Forodhani Gardens Night Market. Its located right on the seafront and there are loads of people selling food at various stalls. The food was mostly seafood but there was also a wide range of other stuff on offer. You will find meat kebabs, pizza, local fish, shawarmas, coconut bread, grilled cassava, roasted corn, chunky sweet potato, garlic chapatti and amazing fresh fruit selections. I had heard people rave about the Zanzibar pizza that you can buy at this market and I was not disappointed it really was awesome. They also make fresh sugar cane water which I enjoyed drinking.

There are a lot of tour guides that will quite happily show you around the old part of the town but to be honest I found it really easy to find my way around. I also found the people to be friendly and helpful and at no point did I feel unsafe. The only thing that did occasionally annoy me was the sheer number of people trying to solicit money out of you. The first thing you going to notice when you start walking around are the beautiful carved doorways. The attention to detail in these doors is amazing. I was saddened to find out that many of them have been removed from Stone Town and sold overseas. This is an absolute travesty and can only hope that this ceases.

My next stopping point was the house that Freddy Mercury grew up in. He is probably one of the islands better known exports and you will come across pictures of him in many of the hotels and restaurants on the island.

Next I visited the old food market. You need to brace yourself for this as the smell is quite overbearing. Its not for the faint of heart and you will see a range of fish and other animals being cut up and sold. Adjoining this is a spice market. There’s a wide range of different spices that you can purchase here and take home with you.

No trip to Stone Town would be complete without visiting the old Slave Market. There are certain historical sites on a world map which become sacred simply because of their history. This is one of them. This was one of the last open slave markets and was only shut down by the British in 1873. The slaves were shipped across from the mainland in dhows. They were then kept imprisoned in crowded cellars. The conditions must have been appalling and I found myself drenched in sweat after spending just a few minutes in one of the cells.

My guide explained to me that the slaves were led outside and lined up in order of size. They were tied to a tree and whipped to test their strength and resilience. Africa has endured its fair share of cruelty and suffering but the old slave market really hit hard.

There is also a tribute to Dr David Livingstone. Some wood from the tree in Zambia under which his heart was buried has been fashioned into a cross.

There are several smaller islands just off the coast from Stone Town. I visited Changuu Island. Changuu Island, also known as Prison Island, lies about 30 min by boat from Stone Town. Ironically enough no prisoners were ever housed here instead the island became a quarantine station for yellow fever epidemics. In 1919 the British governor of Seychelles sent a gift in the form of four Aldabra giant tortoises to Changuu. Presently this species is considered vulnerable and has been placed on the IUCN Red List. There is a dedicated foundation on the island which looks after the tortoises' welfare.

After leaving Prison Island we took a quick boat trip to a sand bank. The water was crystal clear and I was amazed at the sheer number of different coloured star fish I could see. We spent a few hours snorkeling and eating delicious see food. This was a perfect way to spend an afternoon.

I would highly recommend Stone Town to anyone looking for a holiday that combines fascinating history with the excitement of a tropical island. I can't wait to go back.