A budget guide for 10 days in Uzbekistan 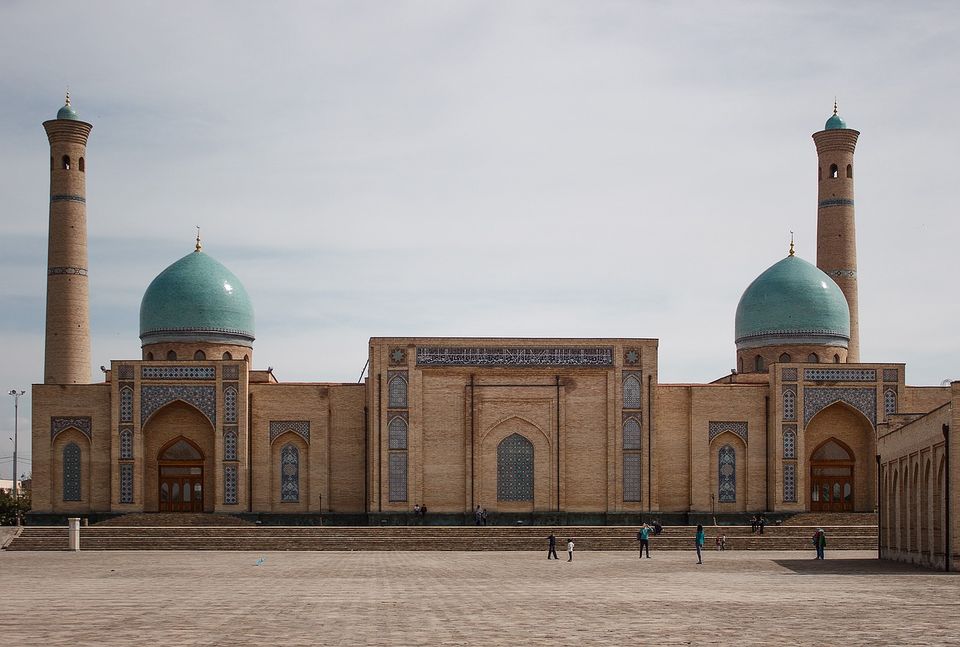 Long ago Central Asia was the cradle of culture and the centre of the ancient Silk Road. The ancient Silk Road was an ancient network of trade routes connecting the east and west. Uzbekistan, part of the Central Asian countries is a land of ancient architecture and culture. Landlocked from both the sides, Uzbekistan is a relatively young country that gained independence in 1991 from the then Soviet Union. The country is now slowly luring travellers to its ancient wonders.

Uzbekistan is a friendly country and is quite safe to travel. And you get brownie points for being Indian because the Uzbeks are madly in love with Bollywood! With majority population following Islam, the country has some of the most beautiful mosques and grand Islamic architecture to fame. Here is a 10 days guide to this beautiful central Asian country.

There are a number of things to do at Tashkent. The most interesting ones are the Chorsu Bazar and the Kukeldash Mosque just beside the market. These places can be easily reached by taking a metro. There are a few museums too where you can take a visit. 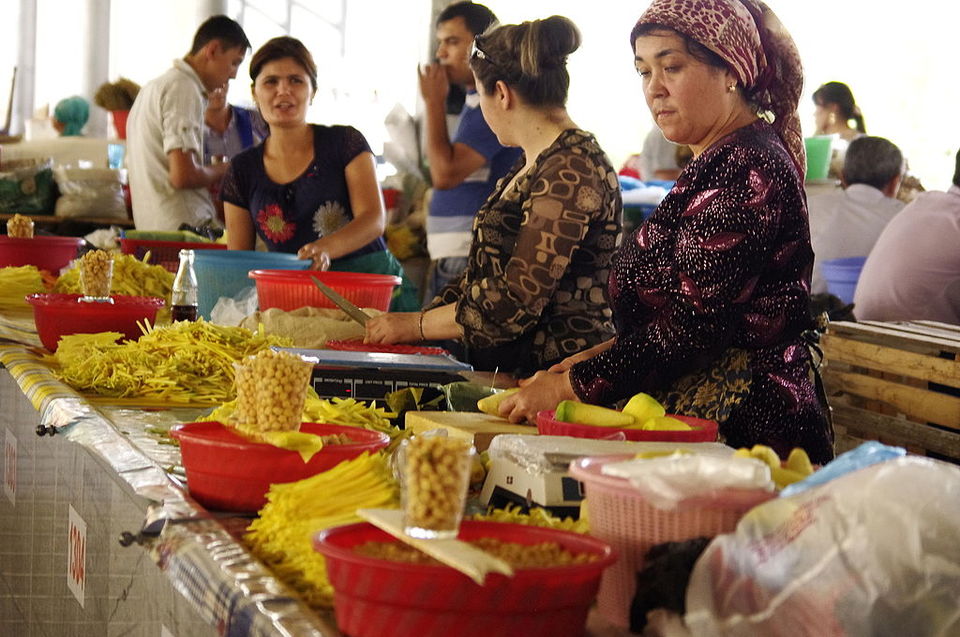 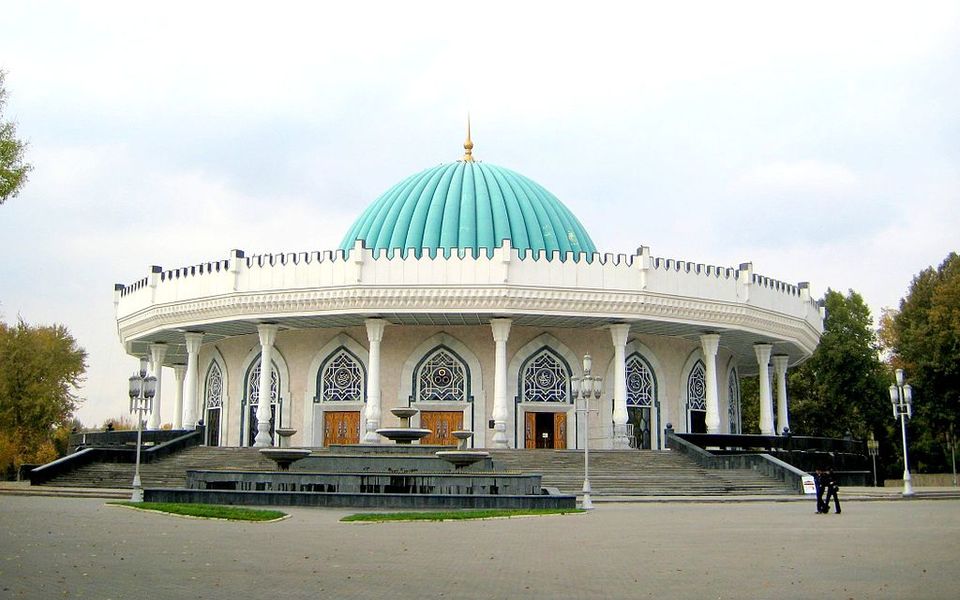 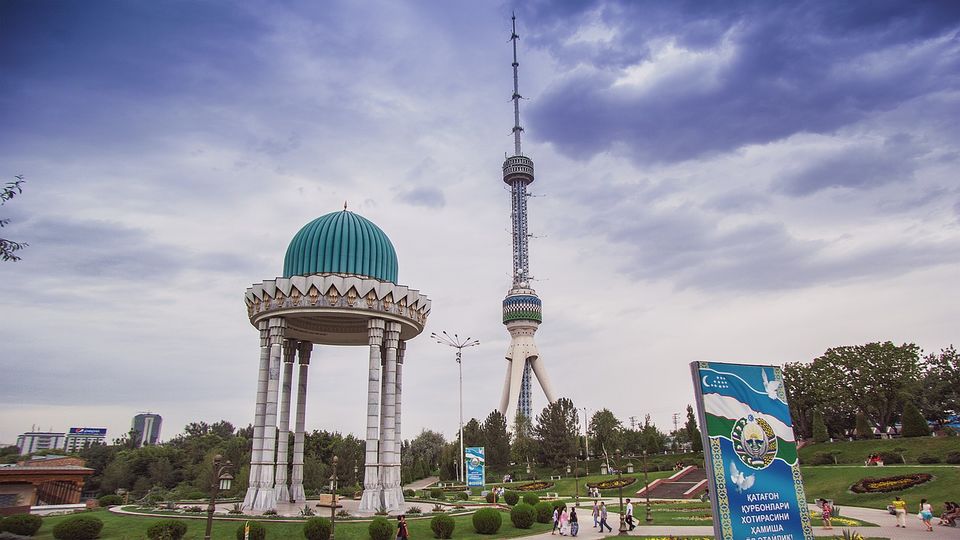 Samarkand is known as the jewel of Uzbekistan. The whole city is like an open air museum. The best part is that most of the UNESCO sites are concentrated in one region and so you can simply take a walk and visit the sites. Take the Afrosiyob Fast Train to arrive at Samarkand.

Registan is a public square at the middle of the city flanked by three madrasahs (Islamic schools). They have a unique architecture and should be visited either during the sunrise or sunset. Registan looks magnificent during the evenings too. So you must visit the place during the day time as well as in the evening.

Other interesting places to visit are the Bibi Khanym Mosque, Shah-I-Zinda, Gur-e-Amir, Siyob Bazar and Shakhrisabz.

Trivia: Taj Mahal was built on the model of Gur-e-Amir.

Except for Shakhrisabz, all are within walking distance from each other. Shakhrisabz is located around 80 km from Samarkand and is the birthplace of the 14th-century Turco-Mongol conqueror Timur.

Remember: Each site has a separate entry ticket. 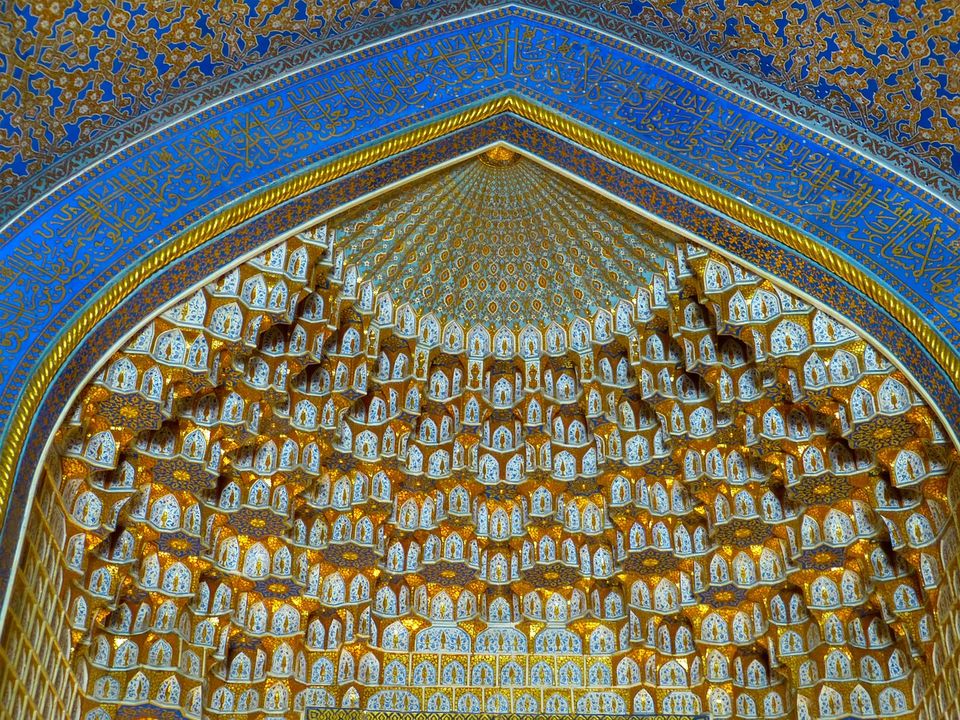 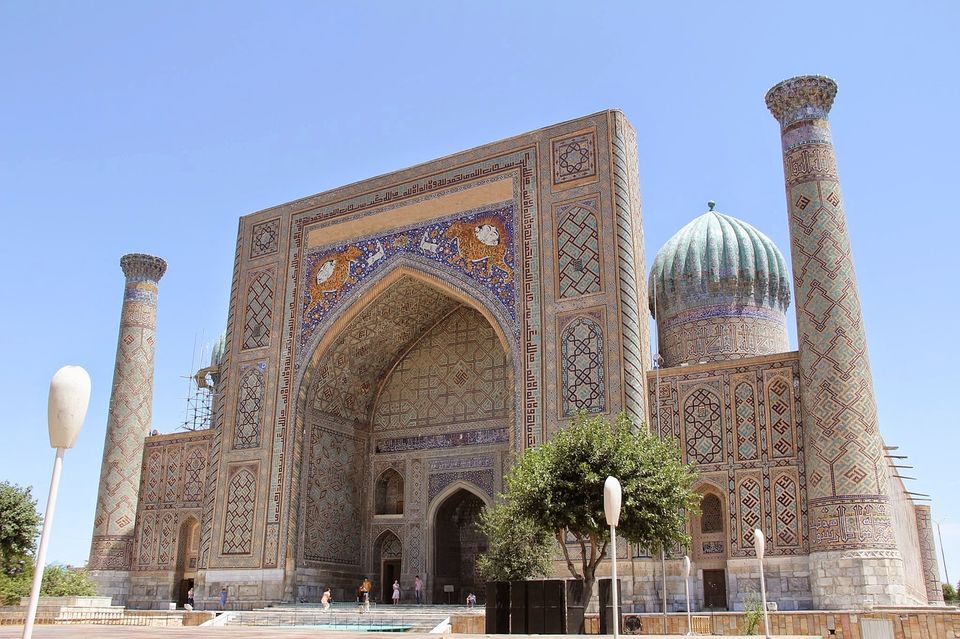 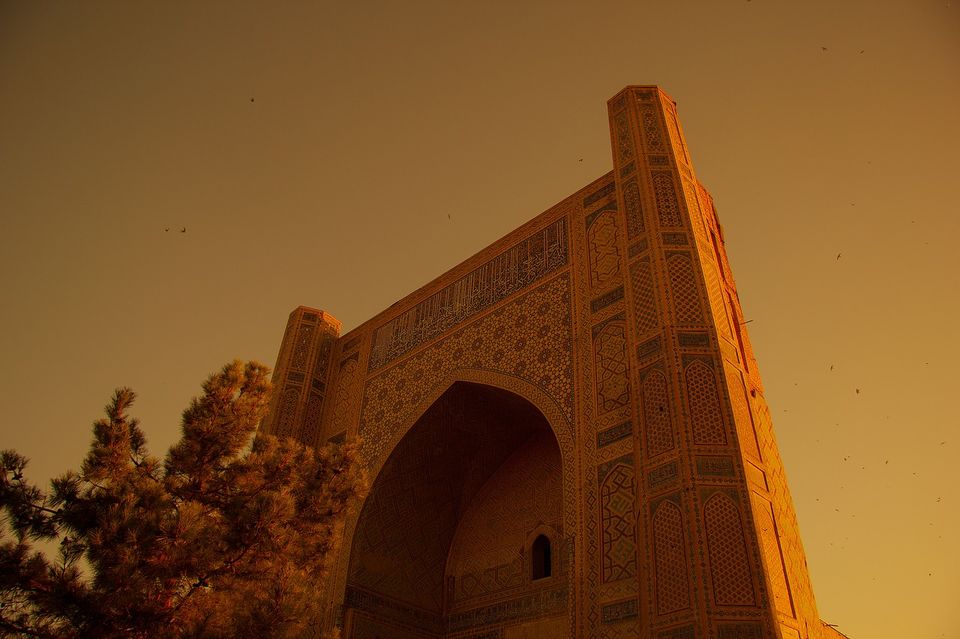 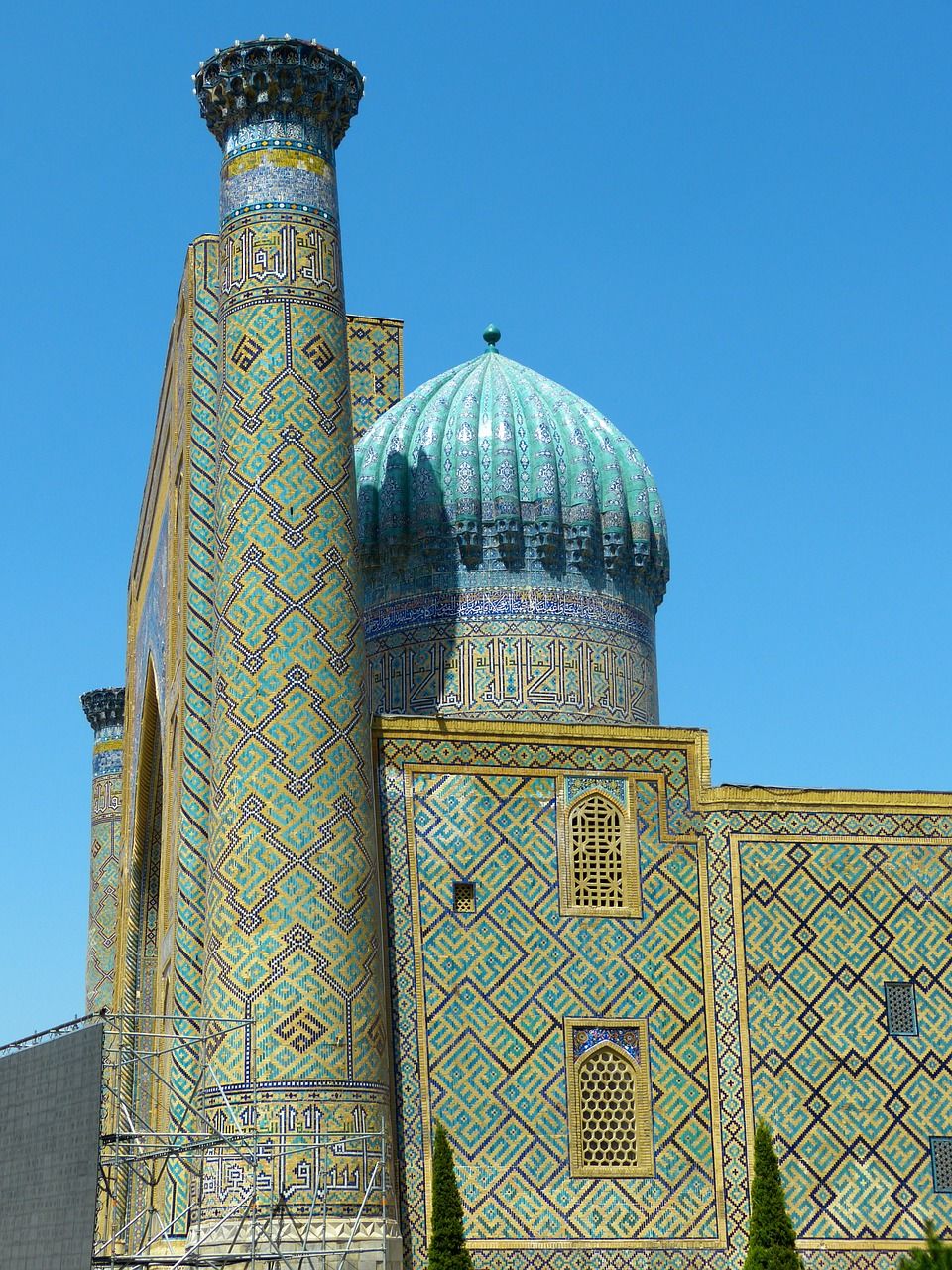 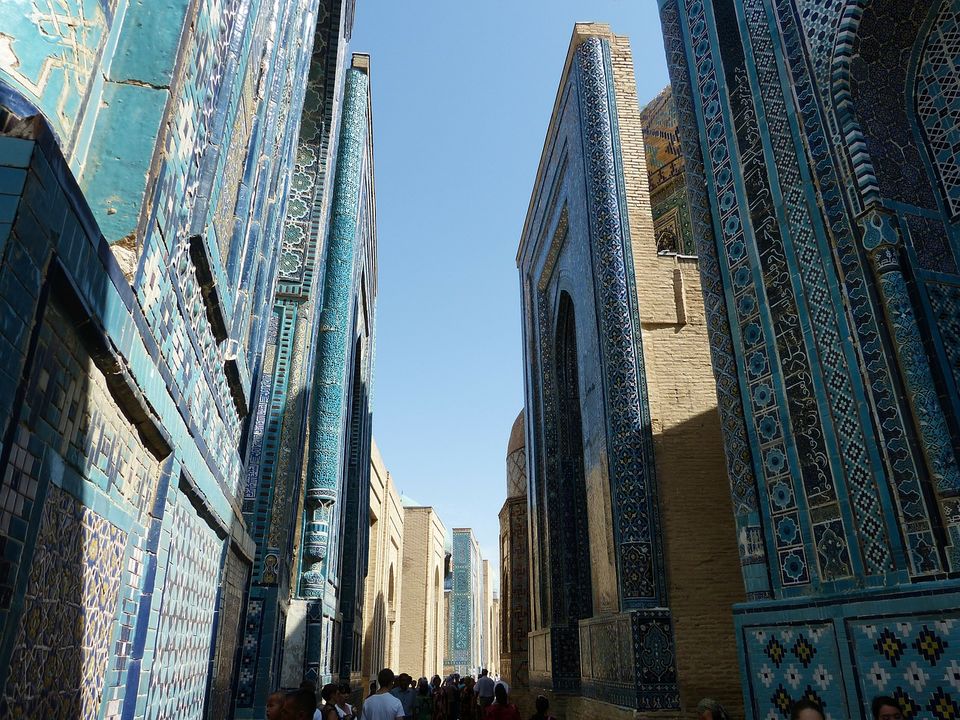 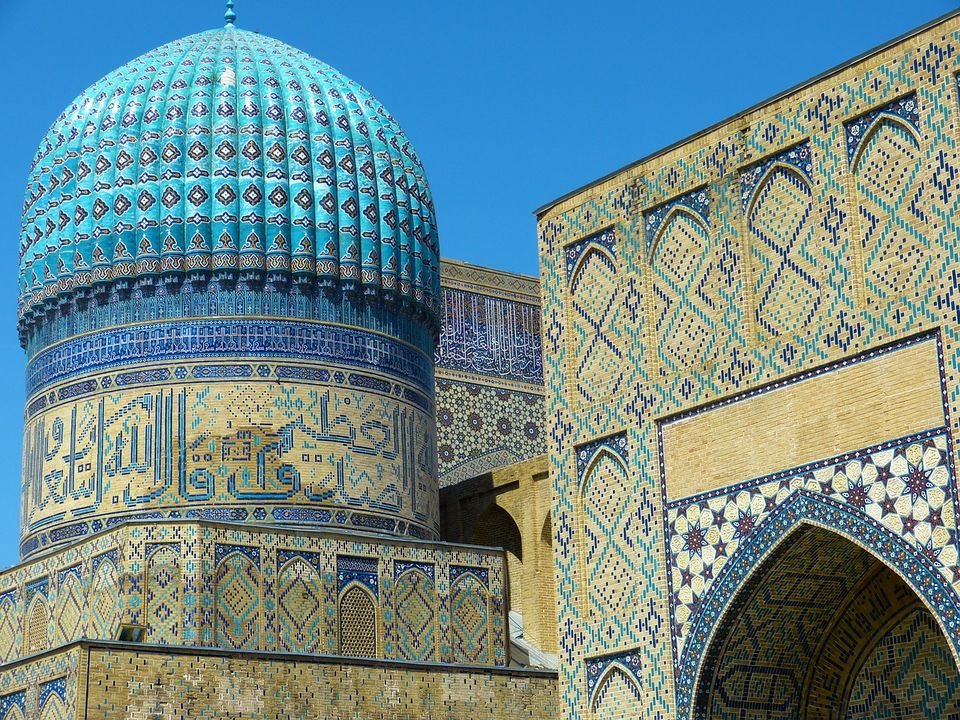 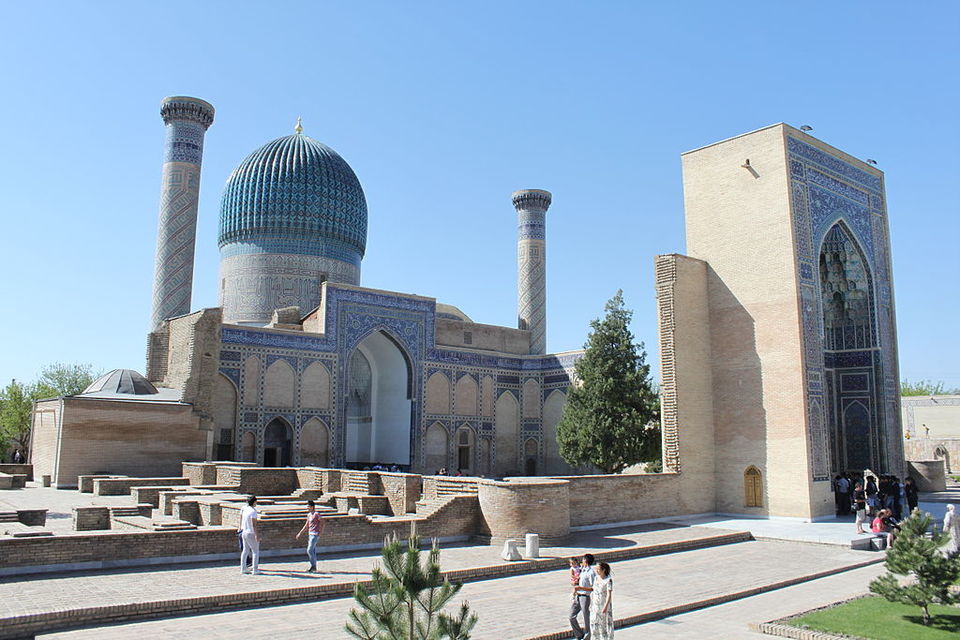 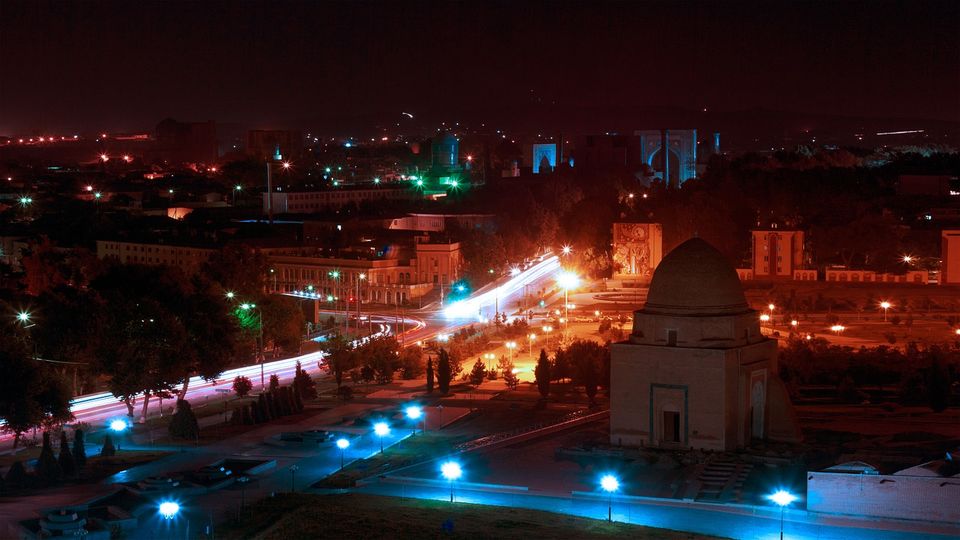 Bukahara is almost 2500 years old and is one of the most ancient cities of central Asia. The beauty of Bukhara lies in its alleys and its old world charm. There are around 140 architectural monuments here. The best way to enjoy Bukhara is by walking around the alleys, visiting the old markets and visit the tea houses. Again the best way to reach Bukhara from Samarkand is by taking a Afrosiyob Fast Train.

Visit the Po-i-Kalyan and behold the towering Kalon minaret and the two impressive madrasahs.

Kalon minaret is one of the few architecture that were not destroyed by Genghis Khan when his army invaded Bukhara. The minaret is almost 900 years old. The top of the tower can be reached by a flight of stairs but it is now out of bounds for tourists. The tower is also known as the Tower of Death because criminals were executed by throwing them out of the tower!

The Kalon mosque and the Mir-i-Arab Madrasah are two other impressive structures at the complex.

Abdul Aziz Khan Madrasah is one of the most stunning architectures at Bukhara. Ithas a museum of wood carving. Chor Minar is also worth visiting. I heard that Charminar of Hyderabad was built in its model.

The Bazaars or markets are another prime attraction of Bukhara and you must spend some time exploring the markets. 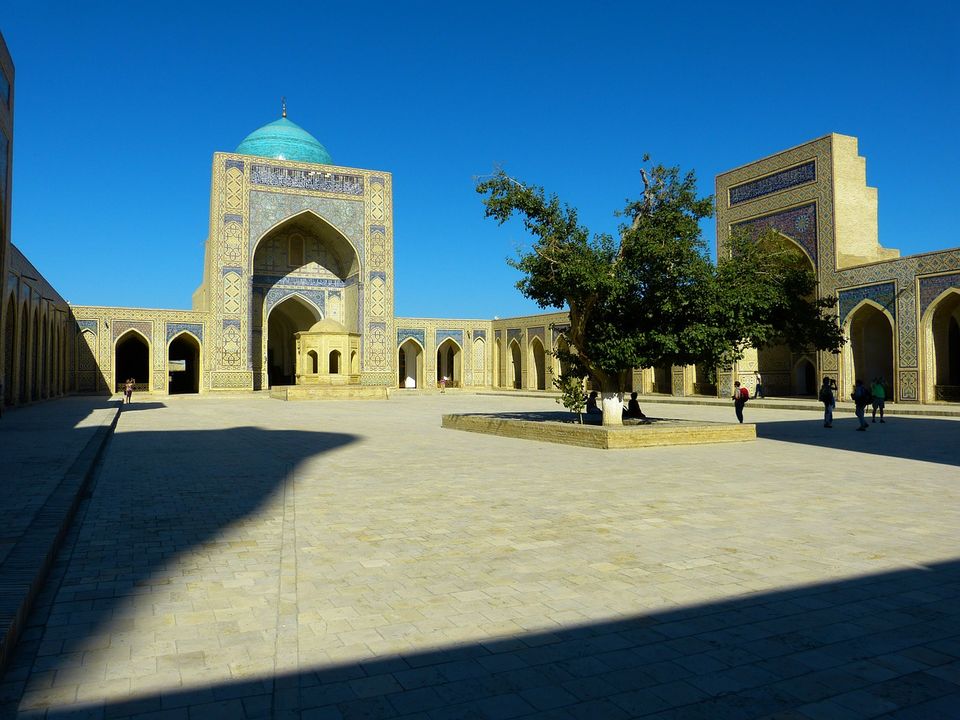 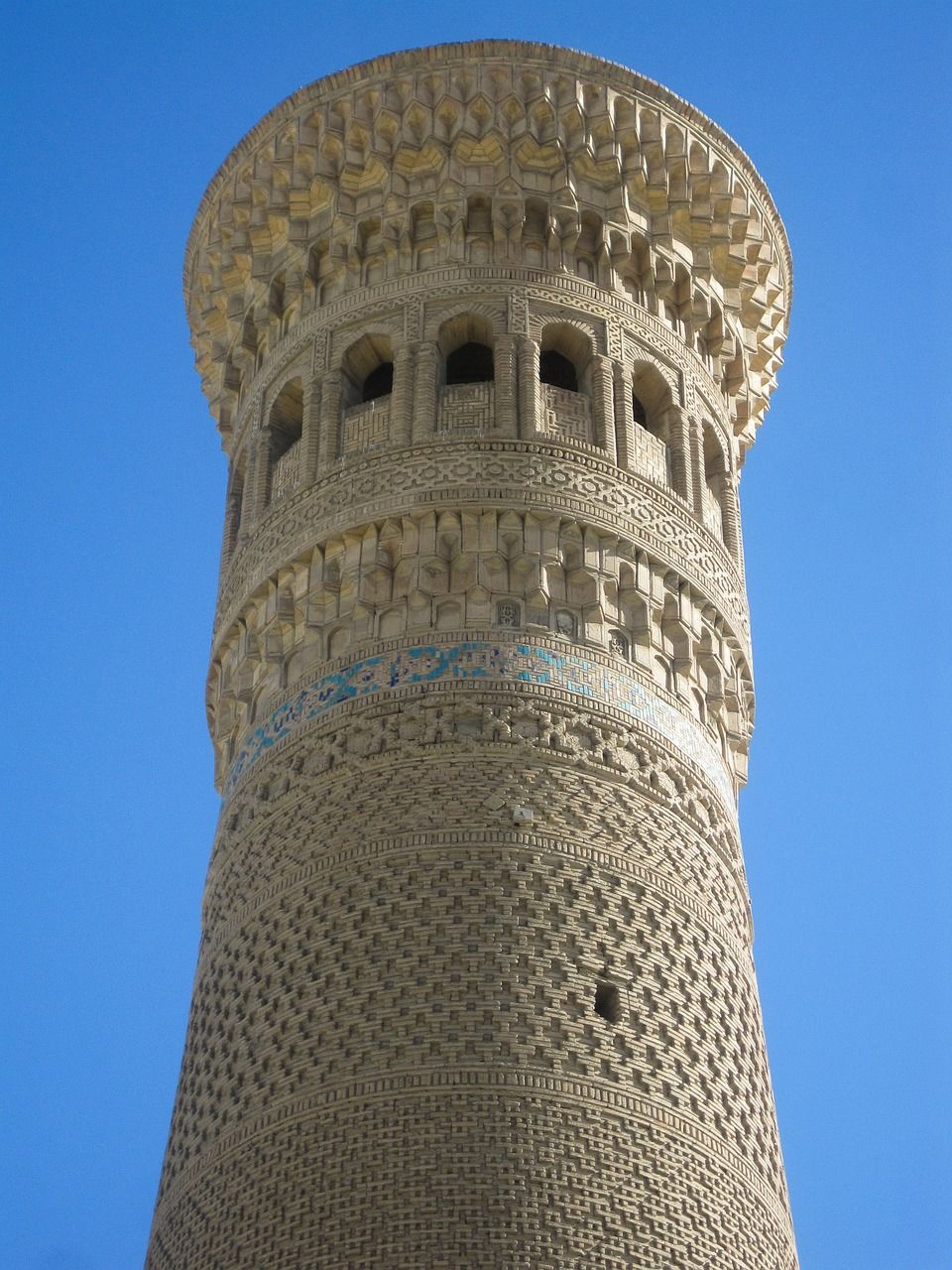 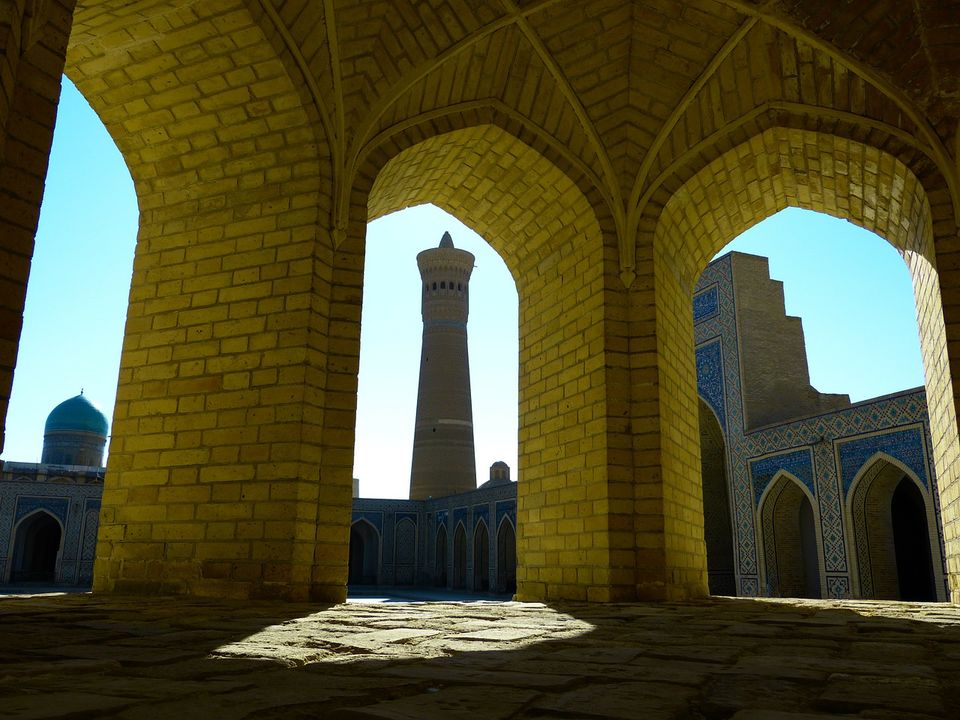 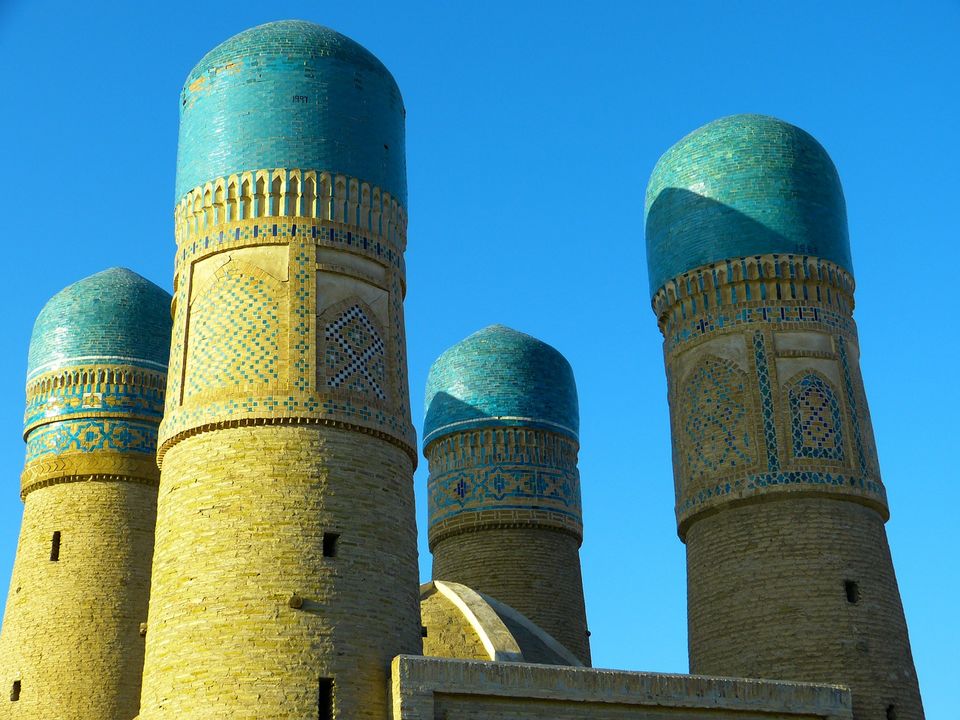 The entire city of Khiva is UNESCO site. The entire city is surrounded by an old wall. Itchan Kala is the inner town in Khiva, which was earlier known for trading of slaves. Itchan Kala has around 40 monuments and more than 200 houses. You can take shared taxis from Bukhara to Khiva. The journey takes about 7 hours. 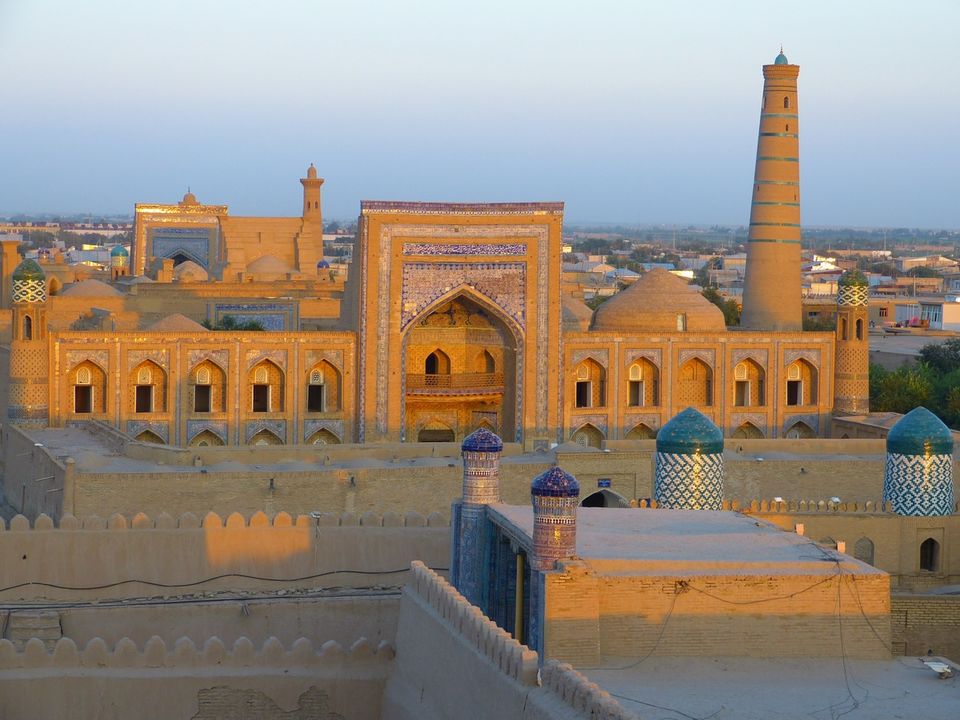 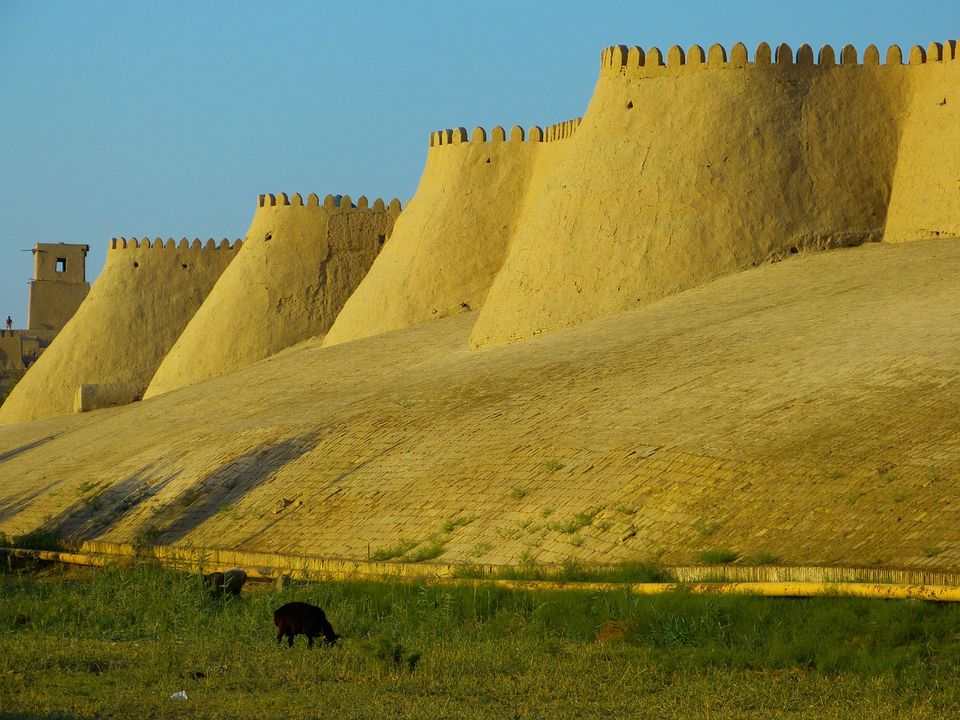 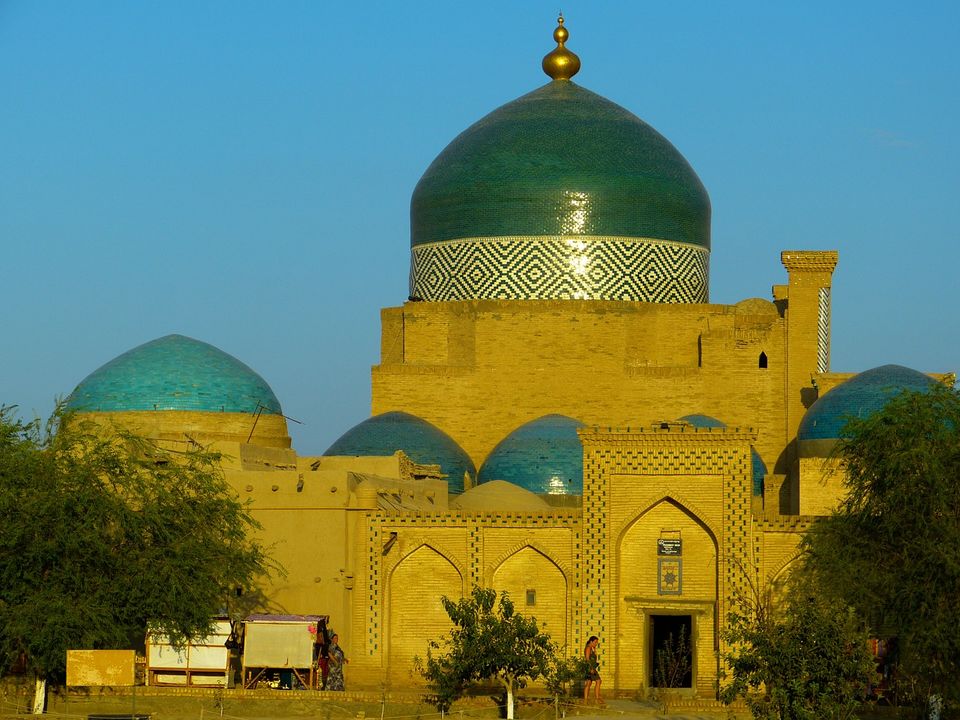 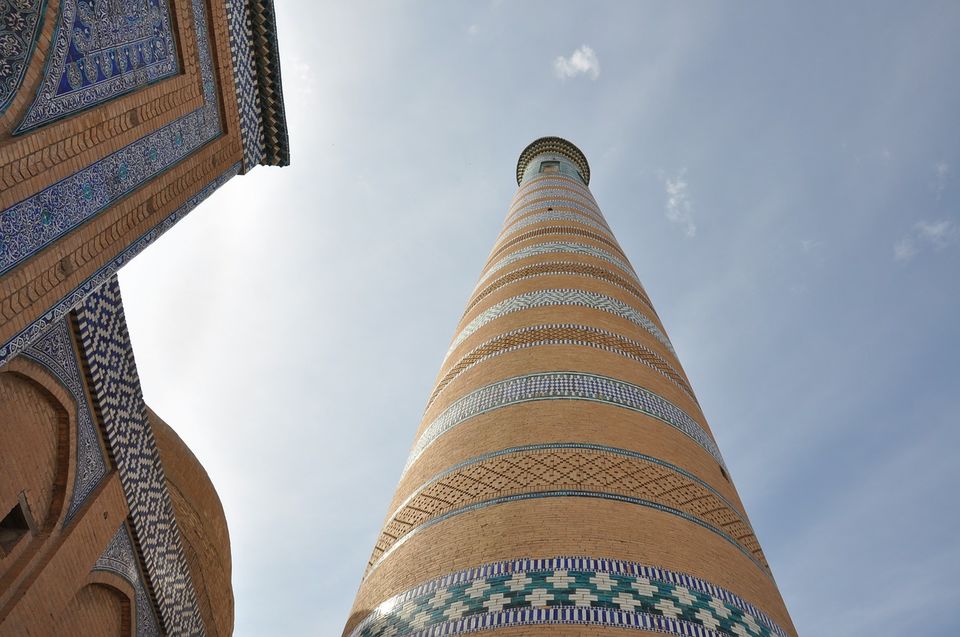 You can either fly in to Tashkent from Urgench Airport (Nearest airport to Khiva), or take 15 hours long train to Tashkent.

After reaching Tashkent, explore the markets, visit the Hazrat Imam Complex that has the oldest copy of Quran in the world and Amir Timur Museum. You can also try the local food.

You will probably be flying out from Tashkent back home, or continuing your journey to other parts of Central Asia.

If you are a backpacker and budget traveller, rest assured, Uzbekistan can be easily done within USD 300 or INR 22000 exclusive of the flight. Visa to Uzbekistan will cost you USD 40. If you are fine with staying at hostels, taking cheap mode of transport and not spending much on food, then expect a daily budget of USD 30-40 per person per day including transport. Uzbekistan is quite cheap compared to other countries and you can keep a check on your budget if you travel wisely. The official currency of Uzbekistan is the Uzbek Som (UZS). 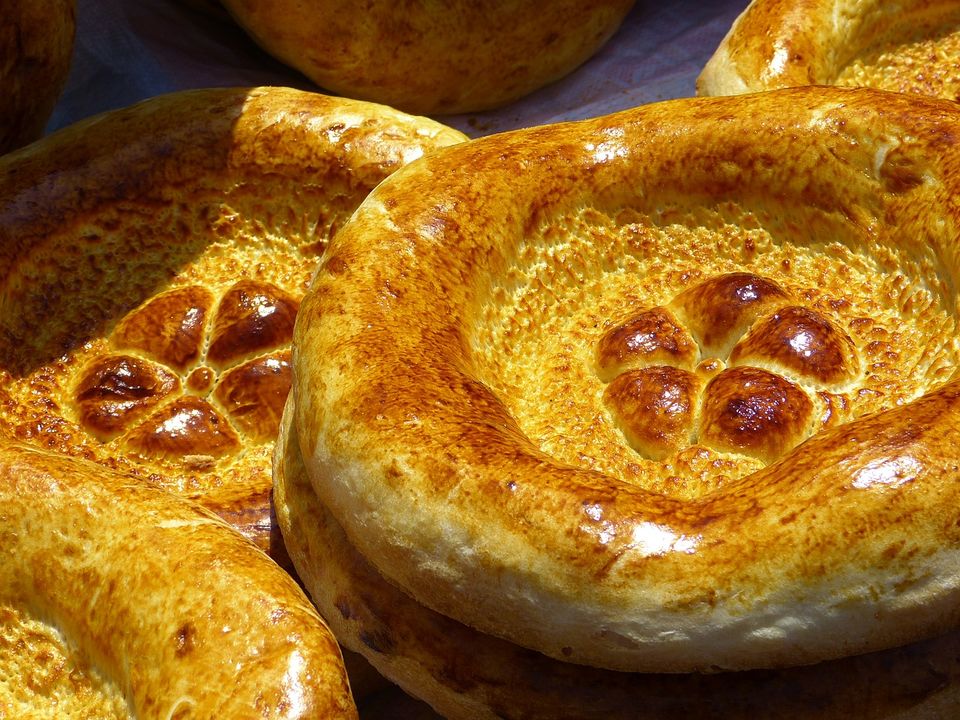 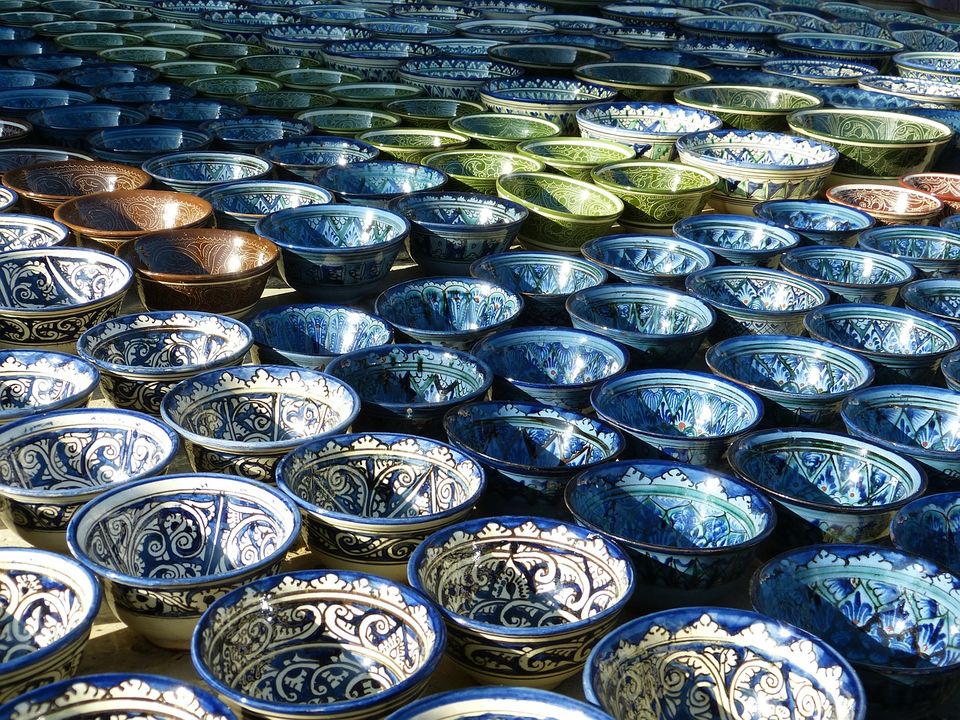 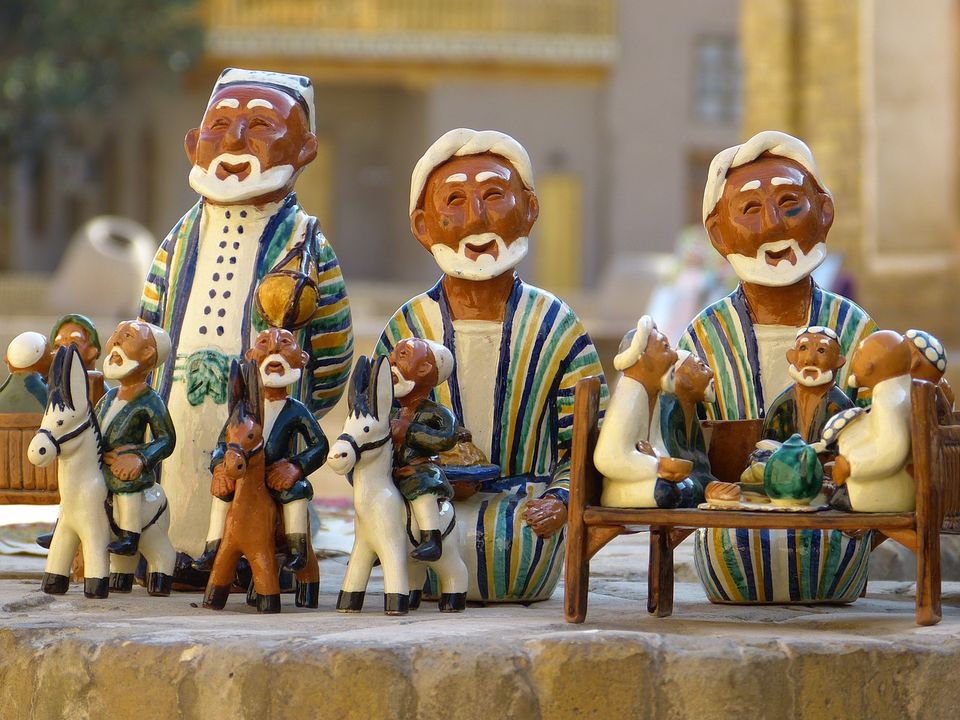 The best time to visit Uzbekistan are between April and May and September to early November.

Uzbekistan is a predominantly Islam country. So dress conservatively.

You can now get e-visa for Uzbekistan by applying online. Apply here.

Uzbekistan is fairly easy to get around. Almost all the cities are well connected by trains. Visit the Uzbek railway site to see the schedules.

You can plan a trip to Uzbekistan along with the neighbouring countries like Kazakhstan and Kyrgyzstan.