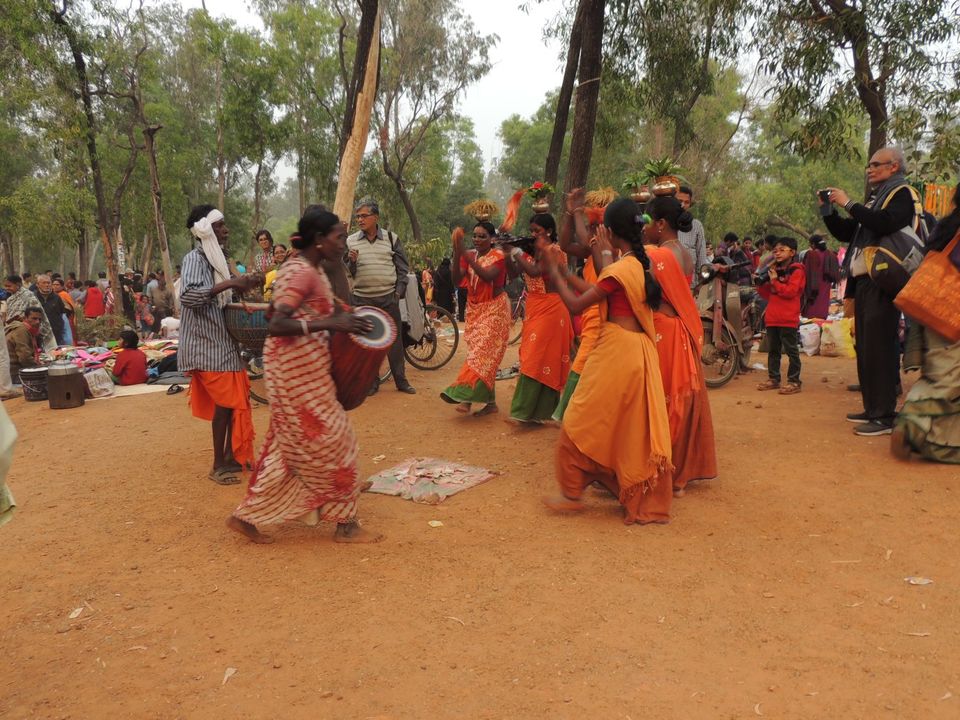 Despite being a Bengali, i discovered 'Shantiniketan' or as I love to call it "Tagore Land" quiet late in my life!

I happen to travel a lot and no, not work related. I chose to believe that i must have been a gypsy in my earlier lives. But somehow, I never visited Tagore Land. Plans were made but they were not followed. However, one winter weekend in 2011, my family decided to travel to Shantiniketan, Bolpur.

It was one of those 'checklist' travels. You have to visit this many spots, one after the other. You need to eat at this place. You need to listen to Baul. You need to shop for Batik and Kantha Stitch! We followed every bit of it. A rickshaw took us to the many homes of Tagore in the campus. A debate ensued...my father called them homes, and i interpreted them as houses! We shopped to our heart's content and ate till out stomach resigned! We listened to Baul as the hotel had arranged for it. We ticked every possible things on the list. But when we started to drive out from Shantiniketan, i realised, that the place was only visited, and not yet discovered by us.

The second visit to Tagore Land happened with my group of friends. It was this very trip that I fell deep in love with this place. There are many reasons for the same. The first was our early morning walk. The winter were setting in (yes, 5 years back, there was a season called winter!) and the morning was foggy. There was a slight nip in the air. Birds were chirping. They were sitting on the wires, in the way, photographers describe as musical notes. With our cameras in tow, we set out to explore this place. We had no slightest idea of where we would walk to. We just took the red soil road and started walking. There were not many sounds except for the ones that we were making while walking, and the backgroud score by the birds. This kind of silence was so refreshing.

We ended up in a village, Phooldanga! The name itself is so beautiful. Imagine the people. The adivasi women looked stunning and walked with such grace. The men's physique could put any male model into shame! Most of the women had already woke up and were busy near the well, washing clothes, chit chatting and just smiling away.They looked so happy with their shoe less feet and a torn saree. It is then you realise, that you need such endless list of things to just smile on a day or be happy for sometime. And here they are, who can smile away because they are content and happy with their being. We chatted with them for a while. Then clicked the customary shots. And then we started walking again.

We then saw two people, clothed in a weird way, sitting in a very small tea corner. The photographers within us made a run for that place. Post a few shots, one of them said, " Oto photo tuley ki korbi, ektu cha khaoa! Tarpor noye amar ekta gaan shon."- He said, that what would we do clicking so many photos. Why don't we treat him to a cup of tea and then he treats us to a song of his. We happily agreed, thinking what better way to listen to Baul songs. That was when we were corrected. They were not Bauls but Fakirs! OK, and this is when we learned that Shantiniketan is more than Tagore song and Bauls, it has a strong heritage of Fakir music as well. And then what followed were innumerable cups of tea and an ocean of Fakir songs. They kept going one after the other, and we sat there listening to music and internalizing the lyrics. We cried, we went mute, we danced and we were rejuvenated.

As the Fakirs moved on, we decided to go to the famous Sonajhuri. Its a vast expanse of land , where every Saturday, a local market sits, in the afternoon. When we reached there, it was empty. The weather being nice, we decided to take rest. Since we all had woken up quiet early, we were tired. So after finishing off a considerable number of boiled eggs, chop and muri, we laid down. And we woke up a good two hours later. The instant thought was, did we just sleep lying on the ground of Sonajhuri! Are our cameras there? Yes, they were safe and sound as were we. We rushed back to our hotel to freshen up. Once that was done, we were back in Sonajhuri to witness the haat. People started to come in with their goods. Bauls started to tune their dotara and ananda lohori (musical instruments that they use). By 3 pm, the haat was full of life! And we were there till around 6 pm. The three hours just ran past. We shopped, we ate and we listened to Baul, just going by the checklist of Sonibarey Haat - that is what the haat is called.

We were then much unsure of doing what next! The rickshaw wala then suggested that we should pay a visit to the legenday Kalo Da's tea shop in the campus. We happily agreed. Kalo da's tea shop is a local hotspot for the students and also the locals. Tourists are not much aware. When we reached the place, it was jostling with activities. There was one group singing away Tagore songs, there was another group debating on politics. We managed a small corner, and just realised that what a perfect adda place is this. It was around 9 when we left that place. Early next morning we were off to Kolkata. And this time, when i left, i knew that I would be visiting this place quiet often.

Five years have gone by, but i travel to this place every year. It has sort of become a ritual. Every time gifts me a new realization.Yes, my Tagore Land is slowly changing. Its slowly becoming populated with residential complexes. Roads are encroaching the territory of nature. The small Sonibarey haat now has three more haats going on beside it. Weekend traffic is now a nightmare. But i still keep visiting! Because deep in my heart, i am sure there are more things to discover in my Tagore Land.