The day reminds me of last year when it was same date and my friend's birthday and a trip happened because I hate get togethers for the sake of Birthdays and Anniversary celebrations, not because I don ' t like birthdays but these social occasional gatherings are so boring. School was fun because it was a day to escape regular school uniforms and dress in casual ones. Till the time I came in college I preferred escaping from the city and common people around to the place with new people and be myself.

Last year on this day we were in Calcutta and it was my friend's birthday on 6th March and I suggested to take a day off and en-route to Shantiniketan (2 hours journey from Calcutta). We heard it as a place owned by Tagore Family with his homes and Viswa Bharti University.

When asked by our colleagues and friends we were told it demands not more than a half day visit and nothing much is there. But there was something in the name of it that tempted me and so as a part of self research I asked to the ravel friend of mine about the place and she shared the details about the stay in the village and Shanibarer Haat(Market which occurs only on Saturdays and thus the name).

Incidentally birthday was falling on Sunday so we planned for the weekend. It was Saturday early afternoon when out train reached Shantiniketan, hired an auto for Shakuntala Stay in Sonajhuri Village. While Auto ride it seemed like a regular town, we passed through Tagore house, Kopai River and soon reached at our stay. 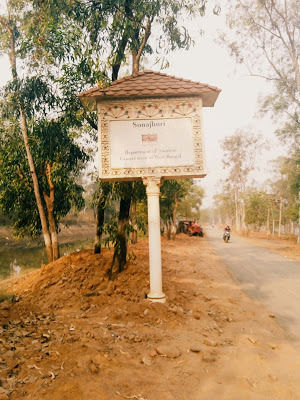 The place was located in the interiors of the village surrounded by forest. The atmosphere of the surrounding was a energy booster as we were tired due to scorching heat and Journey. 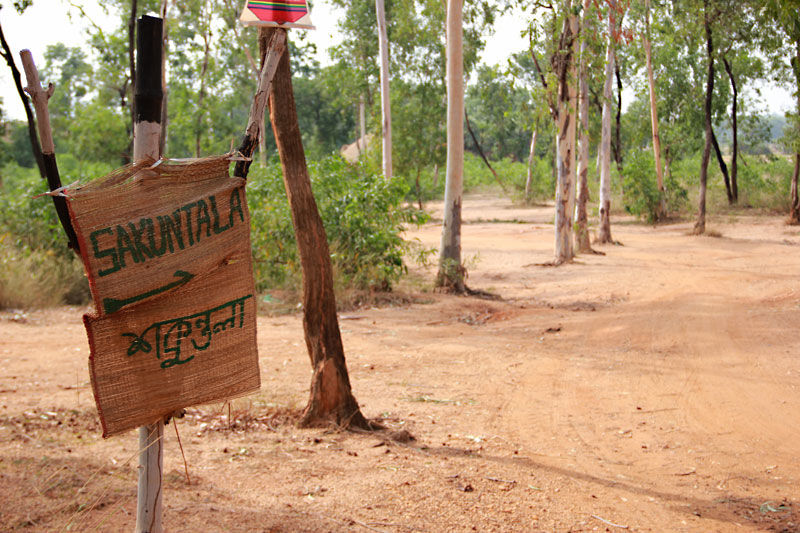 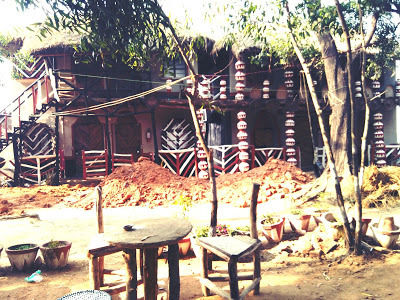 The place offered cultural and natural touch with people singing and dancing. I soon freshened up and my hungry belly couldn't wait. The interiors and aesthetics were enough to give me more tempts. 2 months already in Calcutta and I had never taste the Bengali Cuisine. 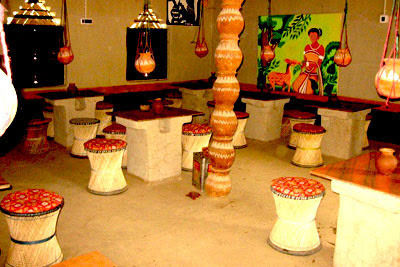 Did I say Bengali Cuisine? Yes because the resort presents authentic & traditional Bengali cuisine even for the vegetarian people like me. Soon we were served with warm and aromatic bhaat(Rice) with Posto Bora in green lotus leaves. Before this I have never loved rice this much and I ate like it was my last meal. 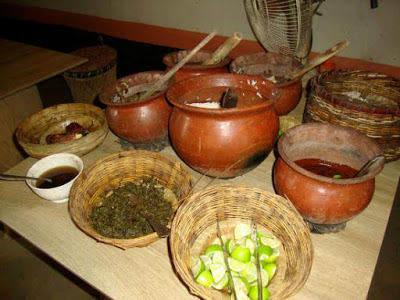 After waking from almost an hour sleep due to the heavy lunch, I thought we missed the Shanibarer haat so rushed outside and the whole atmosphere was spellbound. It was spread across a huge area with Baul singers, Dancers and local artisans displaying art and handifcrafts with traditional delicacies like rabdi and chaat. Baul Gaan or baul sangeet is one of the oldest type of songs with rich heritage & culture in its background. I was just lost in the beauty of it, in the music of the bauls, colours of the handicrafts, various dance forms and it seemed like the perfect blend of culture and traditions. 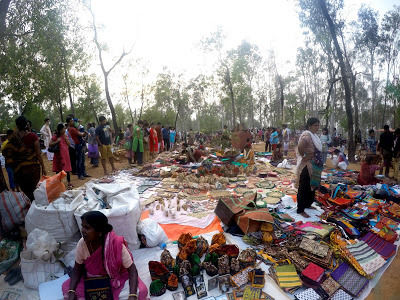 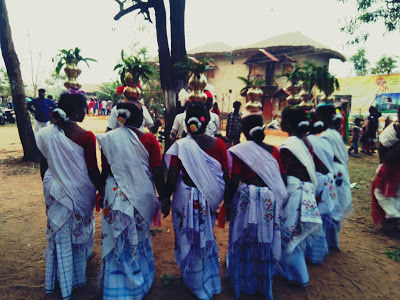 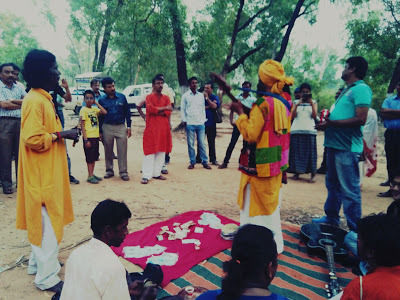 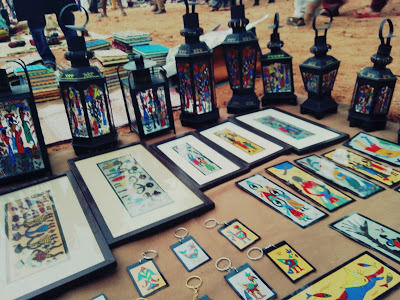 The Bauls were singing till late night and I couldn't really understand the words being in Bengali but the music was so powerful and pleasing. That night we were just strolling around and saw a light from distant. Moving towards the light it just got multiplied, increasing the curiosity we moved closer and we couldn't believe what our eyes saw. There were thousands of Jugnoo(Glow worms) on the ground, it felt like the twinkling sky. 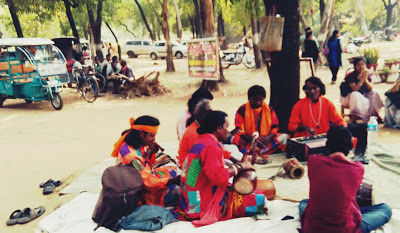 And people said there was nothing in Shantiniketan and it is a half day trip. I couldn't have asked for more from this place but there was another day, excited and curious for the next day I slept.

Next morning started with the walk in the nearby Adivasi gram(village) which was in the interiors of the forest. We passed through the tall rows of trees. 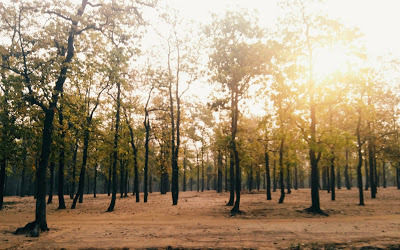 As we were approaching the village we could see the mud huts from distance. Reaching nearer there were narrow muddy lanes, children playing, and women doing the household chores. We were just walking around visited a number of houses of the painters, carpenters and artisans. This village was different from the villages I have visited before because it was pure and untouched unlike the villages which are full of tourists nowadays. 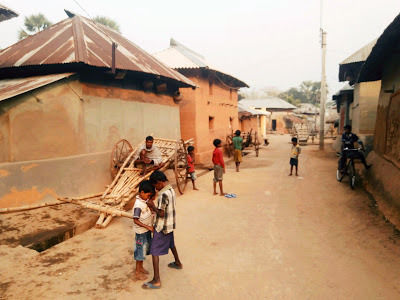 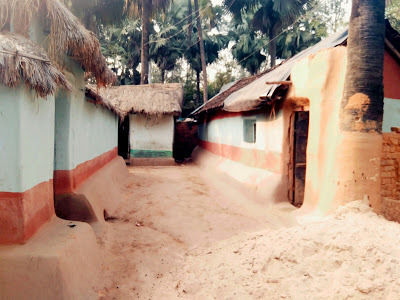 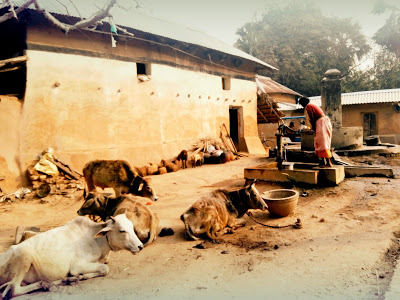 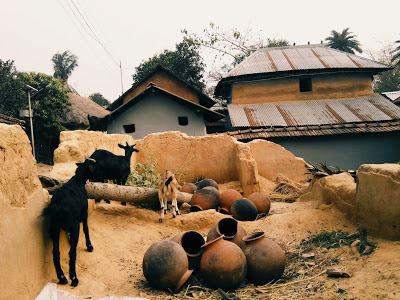 Reaching back to our stay and while conversation with a man who was associated some theater in Mumbai told us about the visit in the same gram and he talked about the beautiful artist house. While he was describing that particular house we thought we have missed the house as it was in the corner in the last lane in the right from where we must have took the left and returned. Wished to visit again but as per the time we had to check out our stay and visit the normal touristy place about which the Wikipedia and other people told about. For next some hours we were walking in the homes of Tagore Family, Viswa Bharti Campus, resting ourselves under the tree due to the scorching sun and had cold rabdi. 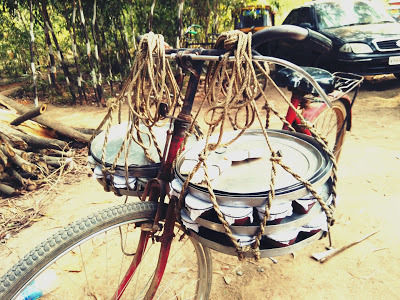 I still wanted to go back to the village and see that house. we waited for the sun to rest and went to the village, passing the forest and rows of trees again and walking in search of the last house and finding our way. The lane we missed in the morning, the house which anyone could have guesses that it was artists house seeing the exteriors. Going inside it was beautifully painted with small artistic windows with beautifully placed terracotta utensils. It was worth the second visit. 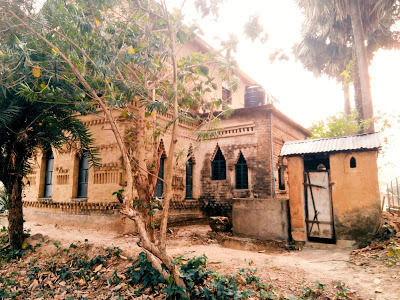 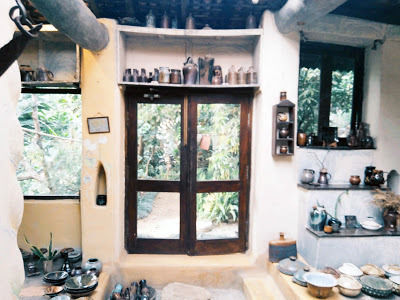 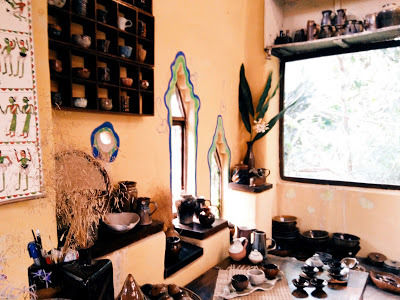 I was still gathering the thoughts of the past two days as it was the time to leave the place with the wish to visit it every time I get bored of the daily monotonous life and city.

I still remember the feeling of the Baul's music inside and the sights of glow worms to colourful haat. Sonajhuri still offers the lost charm of Shantiniketan with the winding village roads, untouched forests and the Adivasi Gram. 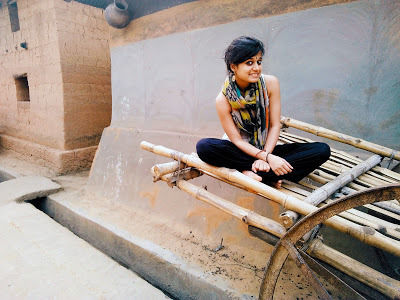 Here i am attaching the weblink of the Stay i had in Sonajhuri Village. http://shakuntalavillageresort.com/contact/

This post was originally published on In The Search Of Abode Of Peace.