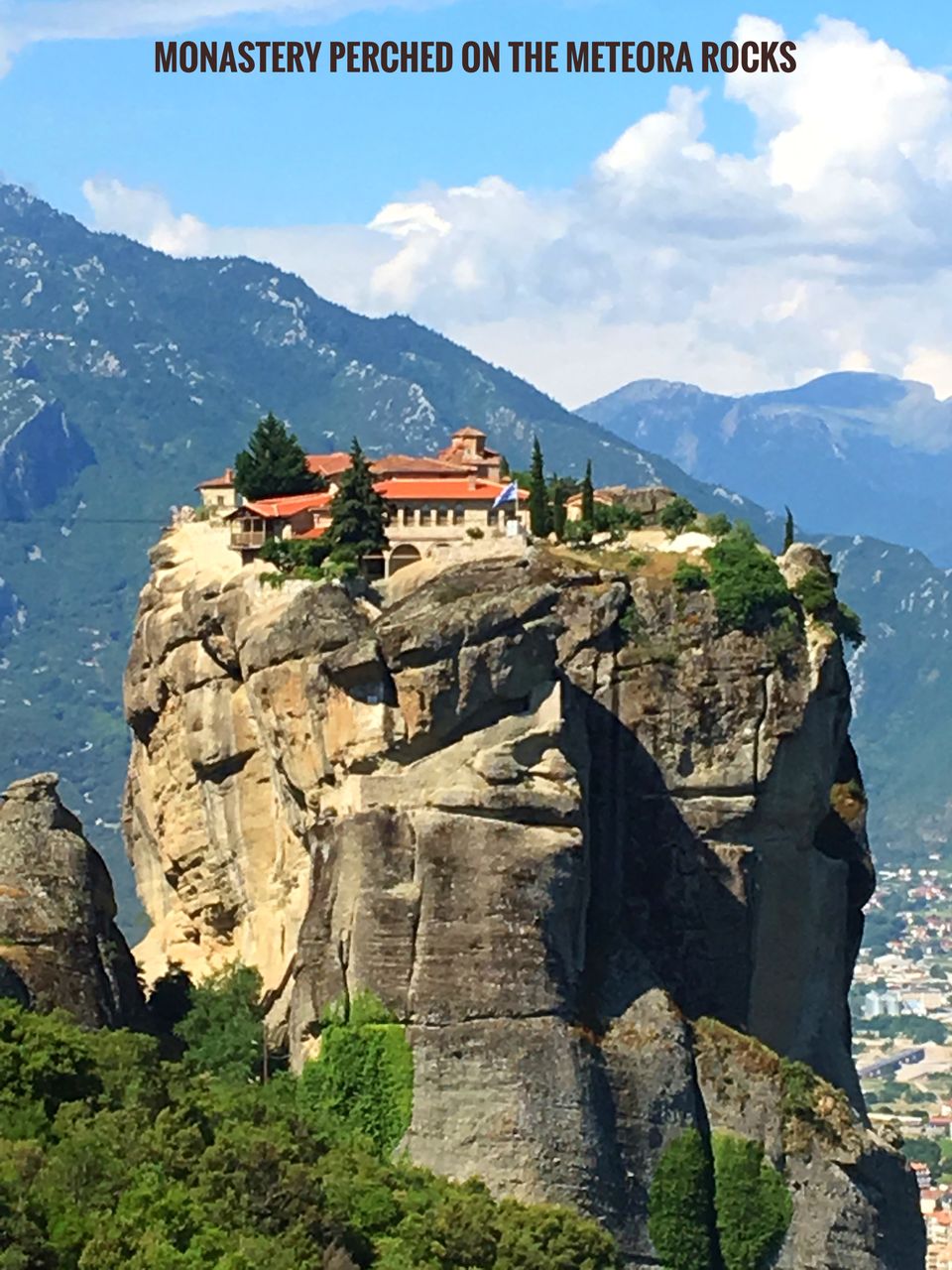 Take the name and what conjures up in the mind is the blue and white-washed dwellings against the sea views. Exotic and picturesque as they are, the Greek islands have indeed put Its Country in every travelers ‘bucket list’.

But there’s more to the country.

It is historic, it is mythological and it is 60% mountainous. And when mythology is perched on the highlands, they make for some very enigmatic destinations.

While I was researching on my greece itinerary for the May17 with family, endlessly scouting various websites, I stumbled upon 2 such locales Delphi and Meteora. One look at its pictures and little reading on them, IT WAS A PLAN.

As a traveler, I like to develop my own itinerary, travel independently using local transport and take Guides only at the sites, when necessary . Thus I got into planning the travel up from Athens (Base city) to Delphi 184kms, and then upward from Delphi to Meteora 229kms. However we weren’t sure about self driving, hiring a driver was out of pockets and regular buses/trains posed time constraints. Most suggestions prompted us to take up the guided tour buses from Athens, frequenting these destinations.

Reluctant but nevertheless, we decided upon one of the many tour organizers www.hopin.com. Their package included 2 days, one night stay at 4star hotel with bus transport, and one time meal.

On the scheduled day, we were picked up from our hotel at Athens at 8:00am. After one hour of the remaining pick-ups, the bus left the city skirts, heading towards our first site Delphi. From here on the window views, winding roads and our guide’s (Maria) voice gave us relentless company.

A little outside Athens, we were passing by The famous town of Marathon and our guide started relating the battle won against Persians there in 490BC. And to communicate the triumph at the capital, a greek soldier ran approximately 40KMs from Marathon to Athen centre. Which apparently inspires the modern olympic sport.

Another 50 kms, we were crossing by the town of Thebes and Maria pours out the mythology of Oedipus, a famous Greek mythology. And likewise every 20-30 kms, one after another many more such stories came pouring out.

I was listening to it all with a, light sleep, when we halted for tea break around 10:30AM. 20 mins past, we were on the drive again and found ourselves climbing uphill. Around 12:00 we were crossing a cute little hilly village Arachova.

A tiny shop at Arachova: Base camp for Delphi 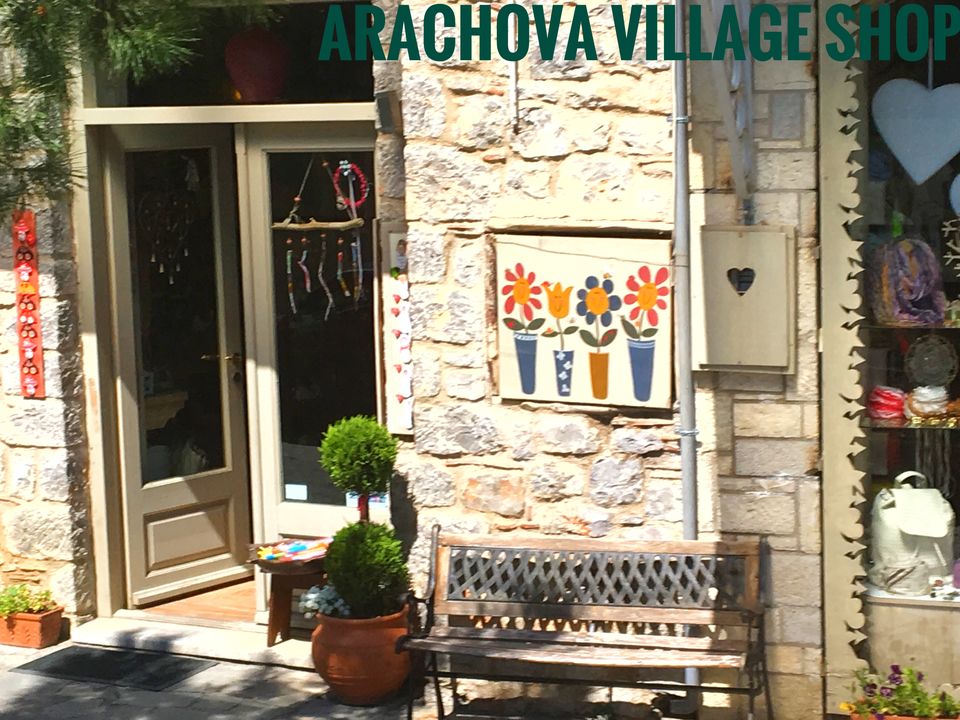 Apparently it houses skiing enthusiasts in the winters, otherwise, a base camp for Delphi, our ultimate destination, where we reached in the next 15 minutes.

At halt, we stretched ourselves under the bright noon sun and huddled up around our Maria. We could see 3 other tour groups across the place. Seemed like a busy day.

Delphi, as one may Google, was considered to be the ancient epicenter of Earth. More famously known as the place from where the Pagan Greek God Apollo oracled the prophecies to Kings, Leaders and Individual who came in search of their answers/future. Maria trailed off the legend of Apollo, who invaded and captured the site from Pythia, the then guardian of the place... rituals followed during the prophecies, diplomacy maintained while giving out the answers... besides how the city flourished during his times of prophecies... how it became a hub of cultural and sports activities... how Alexander the great also visited the site before his invations and many more interesting anecdotes. 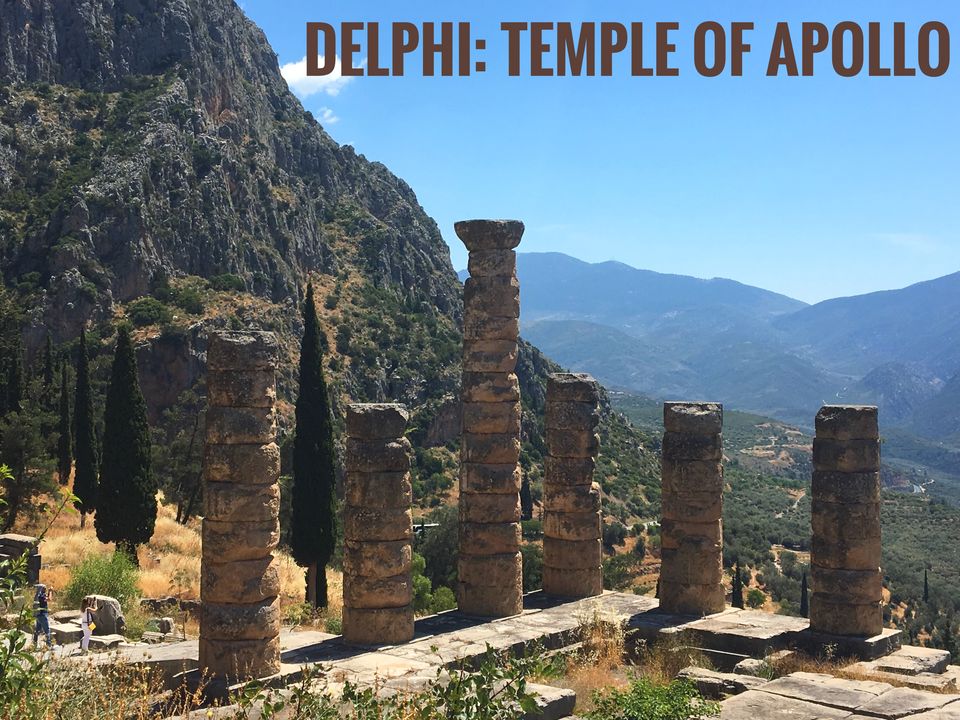 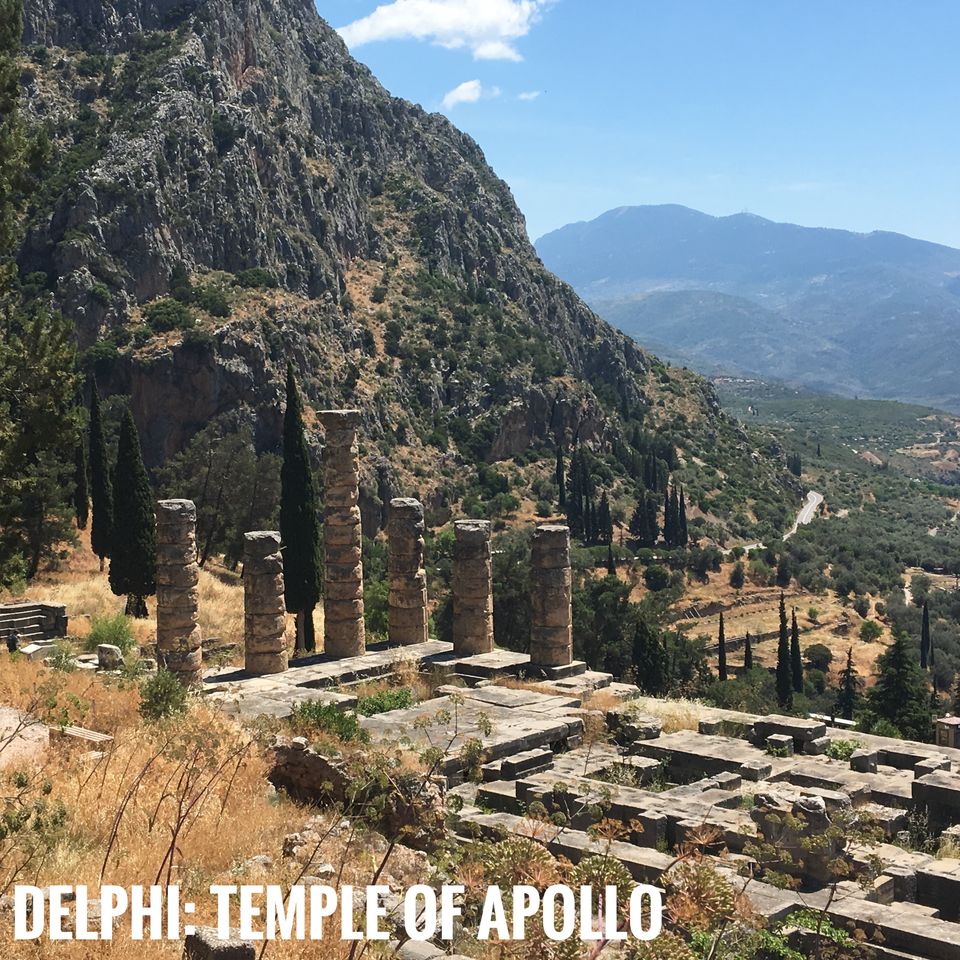 Wall of the ancient city 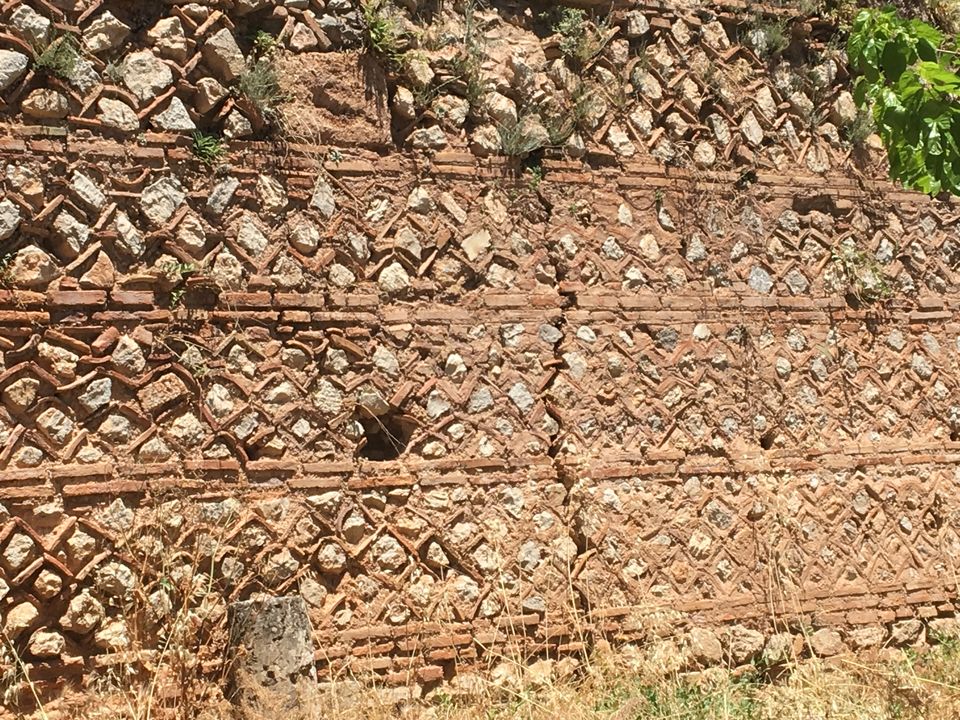 Later, we took our own stroll to check out the site, now that we were able to build perspectives of the ruins. One of the thing which striked my observation, was the small amphitheater, which I felt was so common in every Greek ancient sites that I had visited earlier in Athens.

Got me thinking about Ancient greek's inclination towards Sports, Philosophy, Music, Theatre, Poetry and other cultural activities.

Ubiquitous Amphitheater found in every ancient site. This one is in Delphi 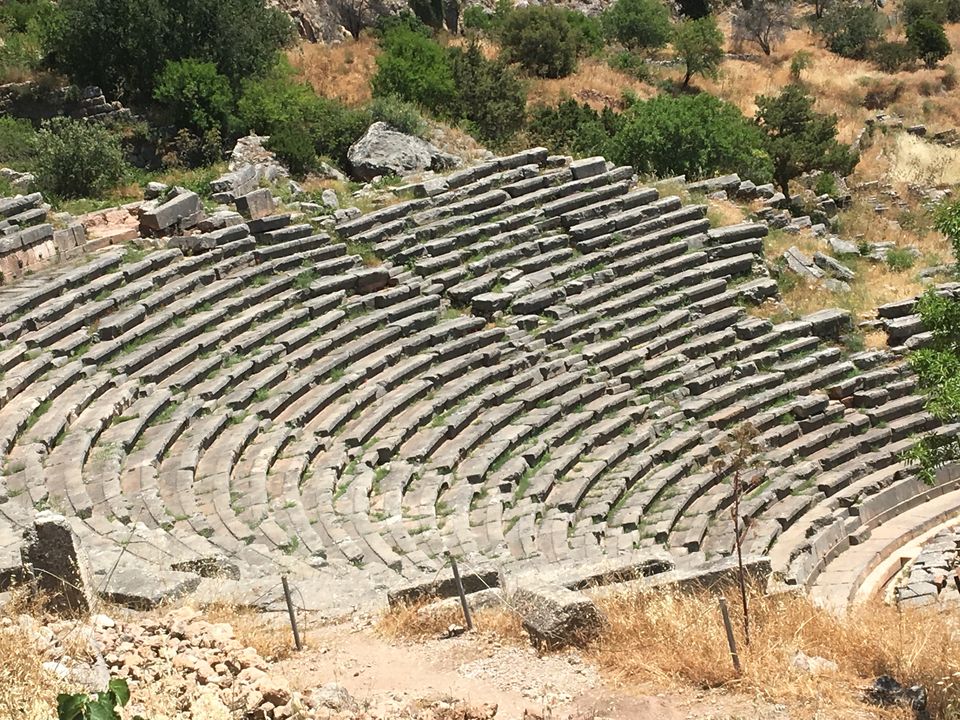 Of Course, I could not laze on my thoughts with the hustle and time constraints.

Besides being a historical site, the place was picturesque with greens, mountains and sweet sunshine surrounding all around. Took those quick selfies and touristy pics, before we were called back by Maria.

It was 1:30 and we were headed to a nearby luncheon joint.

We entered like hungry bees into the restaurant and within a minute filled up the place, randomly sharing tables with fellow passengers.. Apparently the management was used to large crowds and efficiently took and deliverd the orders within 15-20 minutes. Food was just about OK, but got into interesting discussion with a Peruvian and an American on Travel experiences which made up for the luncheon.

Tempted for an afternoon nap, we got into the bus for the 4 hour drive, headed for Kalambaka, the base village of our second destination ‘ Meteora'. But our Guide, had different plans.

Spartans and their feat at Persian Wars came out of her story bag. Sleepy, yet not wanting to miss out on the anecdotes, I kept myself awake through. But today I'm glad that I did so.

Apparently the stories were related to the important destinations that we were passing through i.e. Thermoplyae and Lamia. We had short Tea-Snacks halt near Lamia, after which it was a straight drive to Kalambaka.

After many reminders to be on-time for the next day, we disembarked at around 6:30 at our hotel 'Antoniadis'

Over a period of time the otherwise recluse Monks opened-up to interactions with the outside world. Which meant opening up to Tourists too. Earlier, there were 40+ structures, currently there are only 5 Monasteries and 1 Nunnery in the region and open to tourists/visitors for a stipulated time.

And well they have dress rules for women. Only long skirts. Either you wear them of your own or rent it out at the monastery.

Like the previous day, this Day too, had many groups visiting the place. We were taken to the Great Meteora Monastery, apparently the oldest and largest of em all. It indeed seemed gigantic with winding steps leading up the entrance.

Great Meteora Monastery from the entrance. 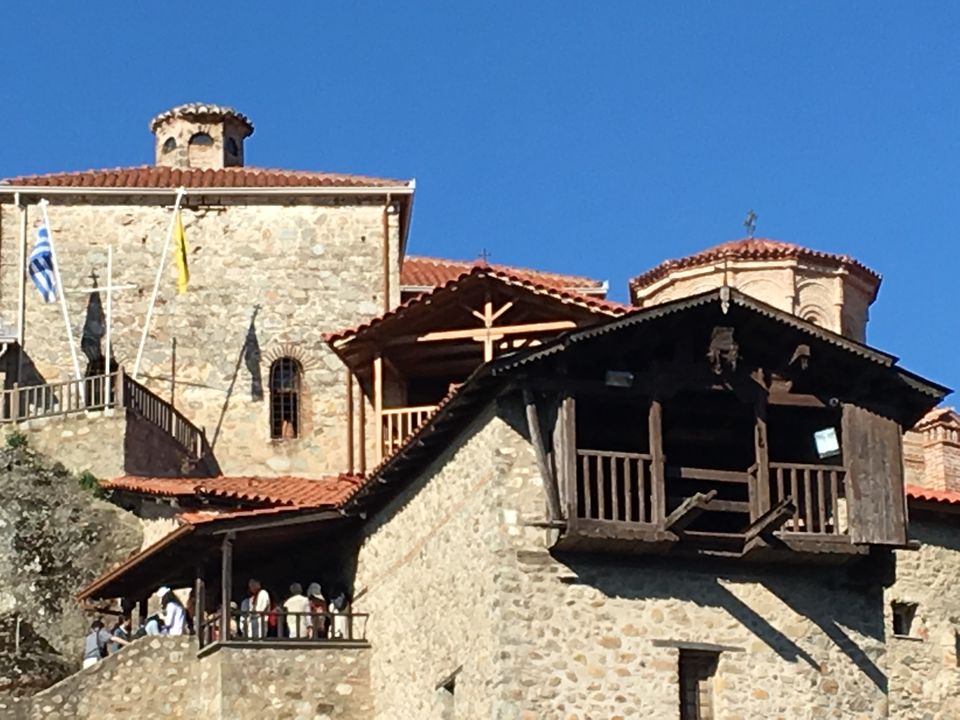 The Monks, as I observed stayed away from the crowd. The orientation was really given by our guide into its history, its rooms, a small Museum and the Church, with its colourful paintings all around. These paintings actually depicts the baptism process. Interestingly this monastery had a room storing skulls of all the monks who had resided there since the 12th Century.

Skulls of the Gone-by priests of the Monastery 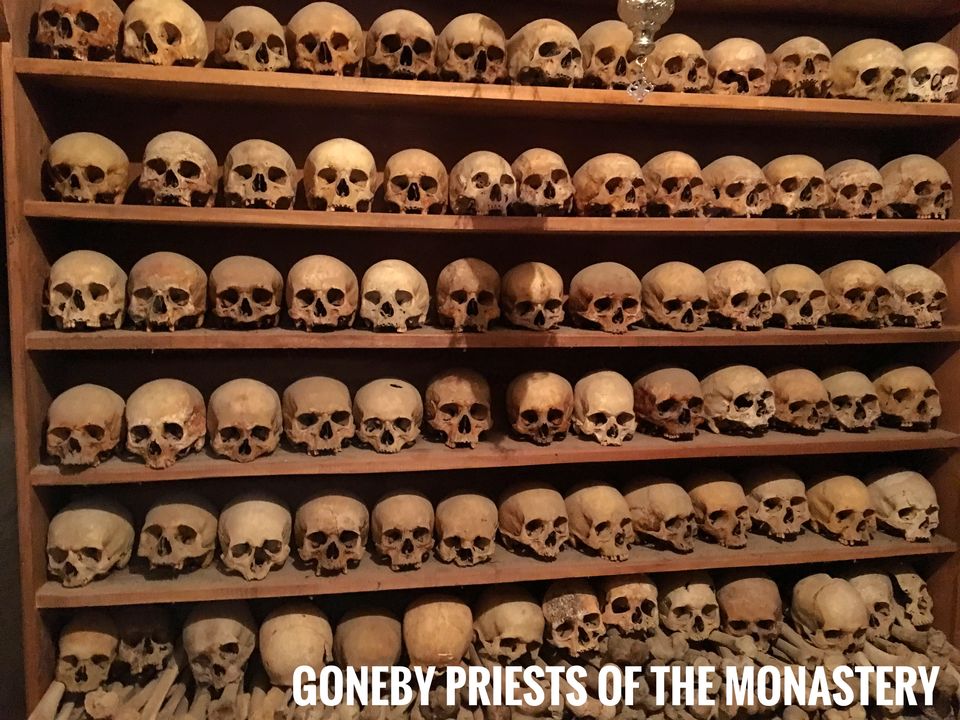 Post the Monastery, we took a quick tour to the Nunnery as well called Rousanou. While it was originally constructed in the 16th century sometimes for the monks, It underwent renovation in the 19th century and converted to a nunnery thereon. And therefore it seemed more modern in its architect and gave a very resort kind of a feel.

At the Rousanou Nunnery Courtyard 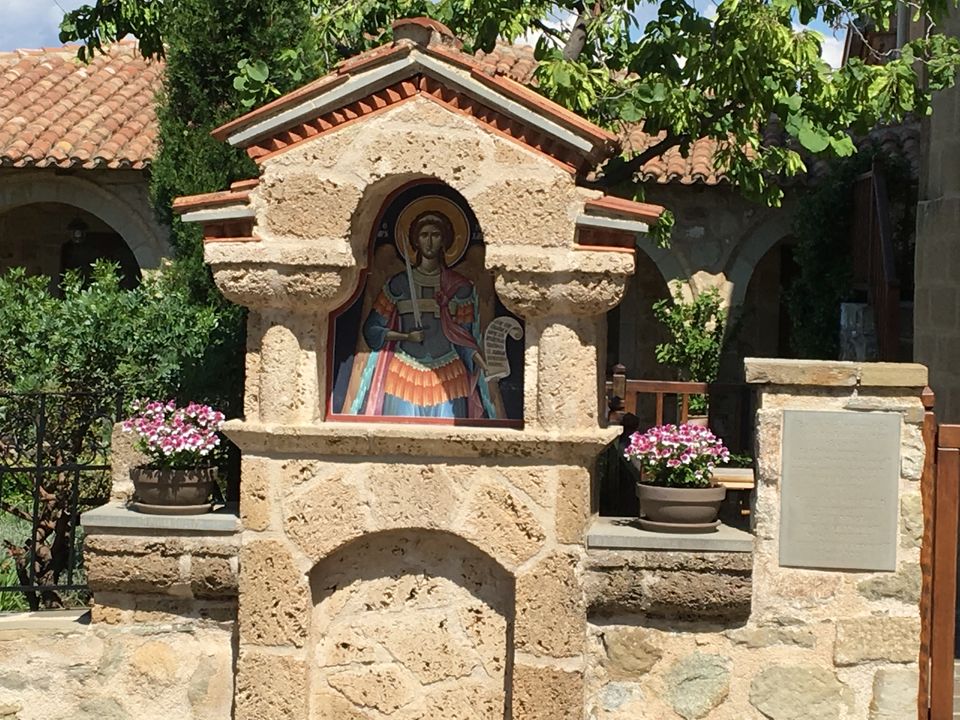 Post the orientation of the monument, a few of us ambled into a discussion on orthodox christianity with the Maria, who gave us a deeper insight into the customs.

Meteora was over by 12:30, but somehow I wanted to explore more of it, more of the region, the monasteries, sink in the views, the place, interact with the monks, the natives, experience its original serenity without the tourists.

But Alas! We were huddled up once again to head back and like dejected kids we stepped into the bus. However, gracious enough was our guide though to halt at a corniche for a few minutes to soak in the views and clicks. We spotted some rock-climbers from here. Apparently the place is also a favourite with adventurists, given the sheer size of the rocks. BTW, did I miss mentioning that Meteora has had the iconic James Bond Movie ‘For your eyes only’ shot here. Maria showed us the the exact location from this point.

It was a quiet 15 minutes journey down to Kalambaka for Lunch. We stopped at a Restaurant called Meteora and were informed that its a family owned restaurant and prepared only 8 dishes per day. We could walk into their kitchen, smell the food, ogle at it and take our servings.

It was an experience of sorts and amongst the 3 of us a family, we tried 4 different dishes.

And no exaggeration here when I say it was the best meal that we had in our entire 12 days trip to Greece.

With so much of food down our bellies, a stroll across the village was a must, which was as touristy as it could get with plenty of souvenir shops vying for attention.

Our final journey back to Athens started around 2:30. And this time, I was really in the siesta mood but Maria still had many stories up her sleeves. Gosh! Greece is an abundance of mythologies!

Here, I particularly liked her summary and the differences she brought out between the two places. Delphi depicting the Ancient/Pagan culture of the country, which was inclusive in nature and encouraged networking across its cities for Sports, Music etc. It resonated with my previous day’s obeservation of the ubiquitous amphitheater found across the ancient sites.

Meteora on the other hand, epitomised the reclusiveness of orthodox christianity, perhaps developed due to the invasive times it went through.

As I think back, had we had the opportune of exploring these places on our own, we could have spent longer time at the site and not feel guided everywhere. But there were many advantages of the tour.

1. Anecdotes, stories, perspectives from a locale.

2. Meeting different nationalities and short friendship that developed there.

3. And of course, the convenience and the punctuality. We reached back Athens dot on time at 6:00 PM

To conclude, not many Indians particularly are aware or plan for the classical region of Greece. But this region is a hidden gem and if culture, history, views sound interesting, this region is a must in Greece’s itinerary.

After all. Greece is the cradle of classic civilisation.

Next Day morning was a hustle-bustle since we had to be ready with our luggages at 8:00AM.

It was a warm sunny day to look forward to.

With all the morning greetings, we embarked in the bus to head towards our second and Final site of the trip. "Meteora, only 3.5 Kms away.

Meteora is intriguing both geographically and historically.

It is an area with Huge Rocks and boulders strewn across a hilly terrain. In Greek language Meteora means ’Suspended in Air’ and thus the name of the area where Rock seems suspended from earth. From the 6th Century onwards, Orthodox Christian monks took shelter here in caves for solitude and protect themselves from Turkish invasions. Eventually they built Monasteries, up on these high Rocks, secluded and shut from the world beyond. They used rope ladders to enter and exit the monastery and whenever they felt threatened, it was pulled back. However in the modern times, the ladders are replaced with bridges or steps cut into the rocks. While it is a wonder as to how the structures must have been constructed, but the view with Rocks and the Monasteries perched on them make for a sight to behold. Many Pictures Google may throw, but seeing is believing. 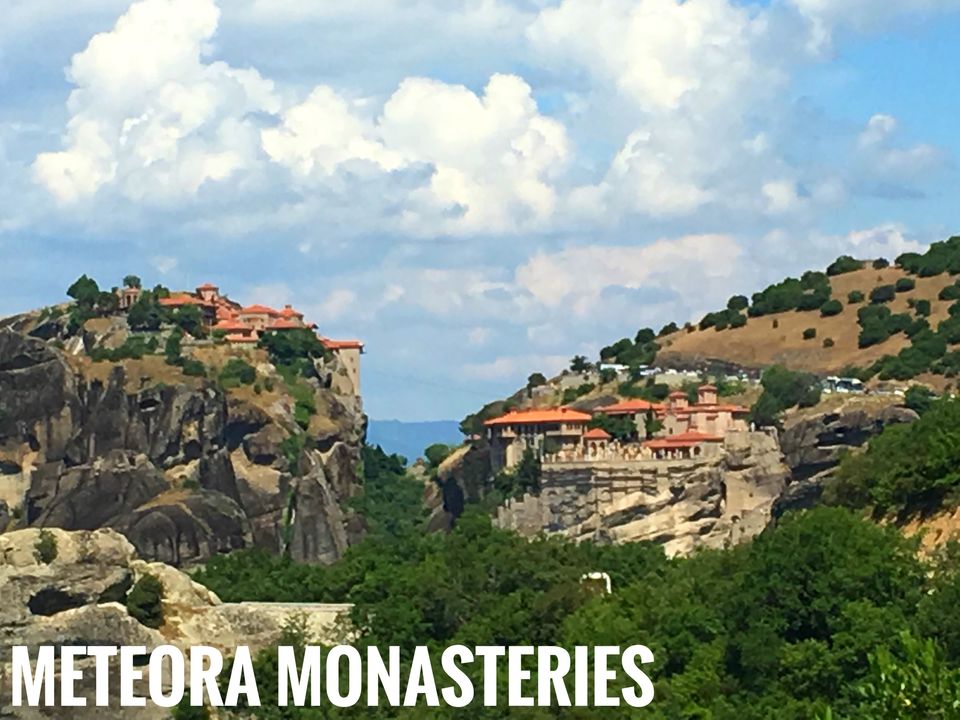 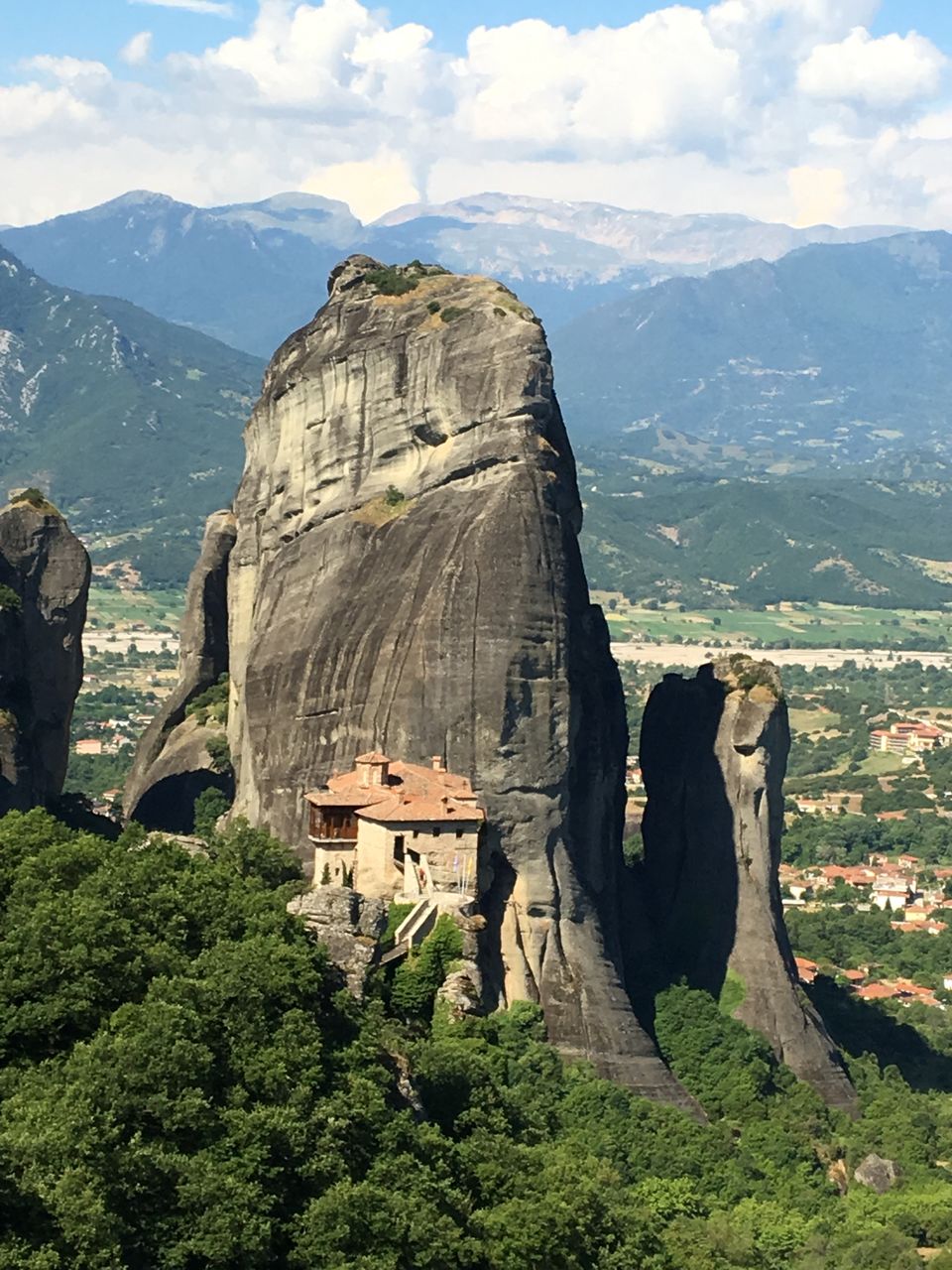 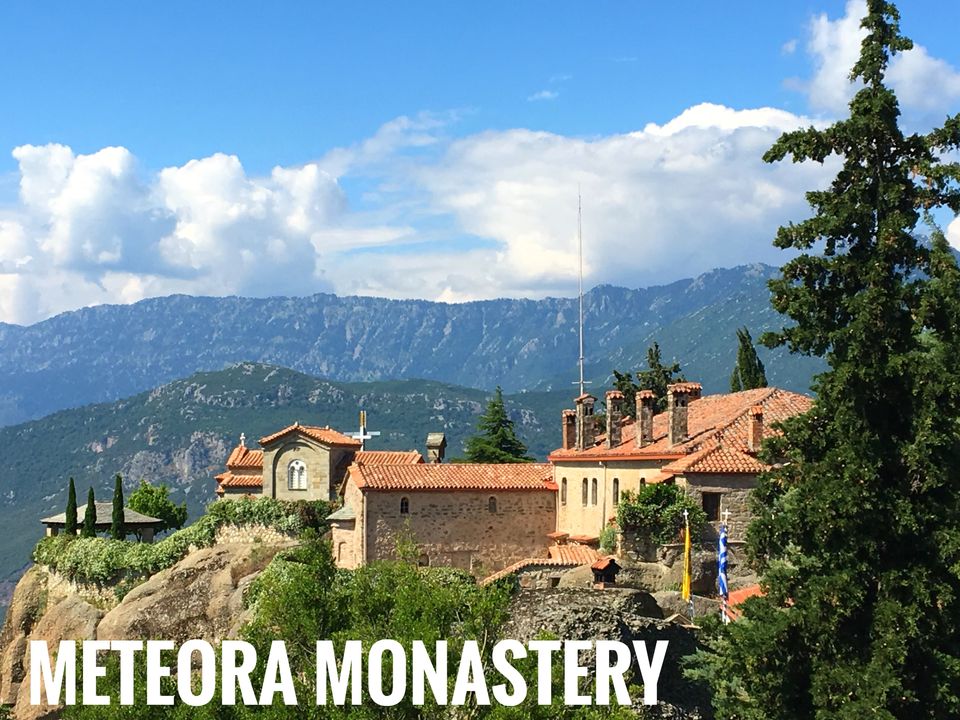