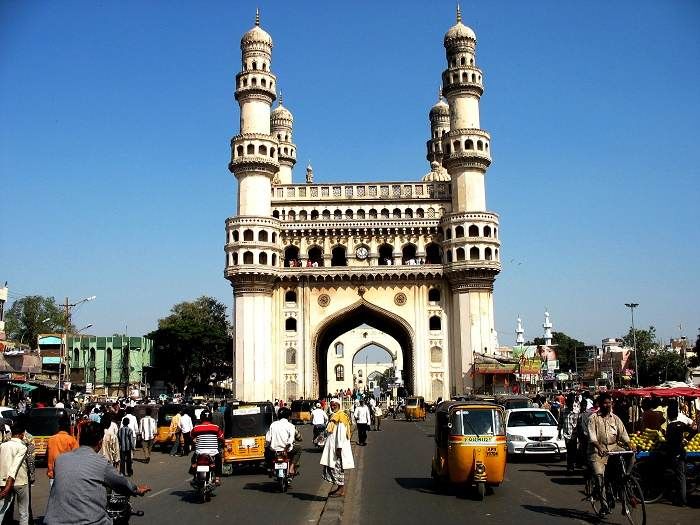 In today's day, our Charminar was planning to take a look at the movie and take the laser show at Lumbini Park through NTR Garden. When we had to walk all day, we took possession of the bus and reached the four minarets located in old Hyderabad from Chanda Nagar. The construction of this Tajya system, built on the mouth of the river Musi, was built by Muhammad Qutub Shah Ali before shifting from Golconda to his capital, Hyderabad in the nineteen hundred and fifty one hundred. This tower was first constructed as the monument of Hyderabad and after that its four more cities were settled. According to historians, it is said that when the plague disease spread in the city in the nineteen hundred and fifty-one years, Sultan Muhammad Qutub Shah Ali had constructed it for the sake of defense. As it is visible only by its name, there are four pillars in the four corners and the walls are made of these walls, making them a quadrangular shape and the top of four towers are domed. It is believed that the stacked minarets are symbols of the four hands of Sultan and his Begum which were raised to pray for liberation. It is lit in the night at night, which makes it completely lively.

The height of Charminar is 56 meters and can be moved here in a mere ticket of Rs. 5. Very steep steps have been made to climb in this. It has contracted to such an extent that if there is a foot slip then there will be major disaster. . Therefore there is a need for utmost caution to climb in it. Varna we will drown and you will also get drunk. At this point there was only one thing in my mind that if the climbing earthquake came, what would be the way to escape. Well, if we sit down to think about it, then we're done, so we started moving forward. The guard standing out lets certain passengers pass in at a time, so that there is not enough crowd inside the tower. The tourists have made their names immortal just like other buildings here. While climbing narrow stairs, we reached the first floor of the tower and we do not get the normal citizens permission to go above it. So from here, find the minaret's craft. After seeing some of the artifacts within a few days, we landed in the camera and came down to the city after seeing the city of Hyderabad from here. Here a temple has been constructed inside a mosque, which also saw the communal harmony of Hyderabad. The outside market is leased from the shops of beads and pearls. Which are known as Ladra Bazar and Stone Ghati respectively. From here there are ten rupees to thousands of bangles and the eyes of the beholder of such a glow in the shops will be screwed. Stone clutches are known as pearls market. When buying pearls, they can also check it. It was rubbing it in a rough place and then after putting water it was in these shops and then there was also time to watch the movie, then it was good only in the departure.

These days, Ganeshotsav was on his way to the full moon, while on the way many people faced the crowd and on the other side the idols of Ganesha continued to appear. In Khairatabad, we were forcibly put in line for Ganapati philosophy and there was strong hope for our picture. Well run away in some way we have reached the time of the film's start. This was my first experience of 3D movie. After watching the movie we arrived at NTR Park. There was a heat and it was not as if he had read his reviews. After seeing Hussain Sagar Lake from the front we returned to the house and then leaving Golconda Fort and Lumbini Park back to Bangalore on the night, for the next time. In this visit, the bus service of Hyderabad was very good, we did not have to stay for more than five minutes at any stop. This way our trip to Hyderabad in September 2011 concludes.