Binsar Travel GuideBinsar TripsBinsar - Well-Known Yet Unexplored Side Of Himalaya

Binsar - Well-known Yet Unexplored Side of Himalaya 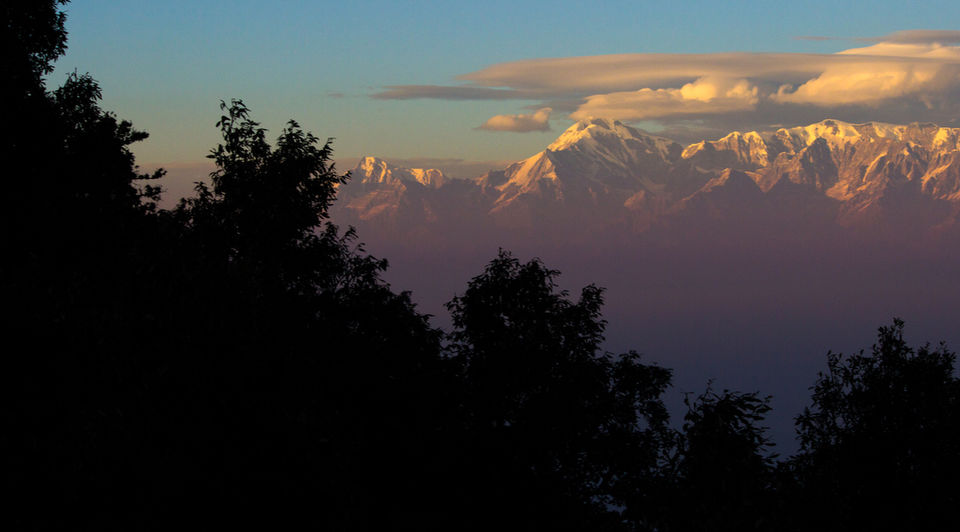 "Binsar. Away from the fatigue of rush hours and confines of daily deliverables, there's a jungle out there, green and thriving, full of silent stories that are reviving. There are mountains out there, both mighty and meek. Of so strong a mystique that will leave you tongue-tied."

Situated about 30 km from Almora on the Jhandi Dhar hills, Binsar Wildlife Sanctuary is the perfect anti-hill station experience you could ask for. It's dense, scenic, quiet, well-known yet unexplored and gives you, if not the best then definitely among the best views of the Greater Himalaya. On a very clear day, right from Kedarnath Peak in Garhwal to Panchachuli in Kumaon and a few lesser-known peaks of western Nepal. All this, evoking an unparalleled feeling that they are just an arm's reach away.

Inside the sanctuary, on the way to KMVN TRH. 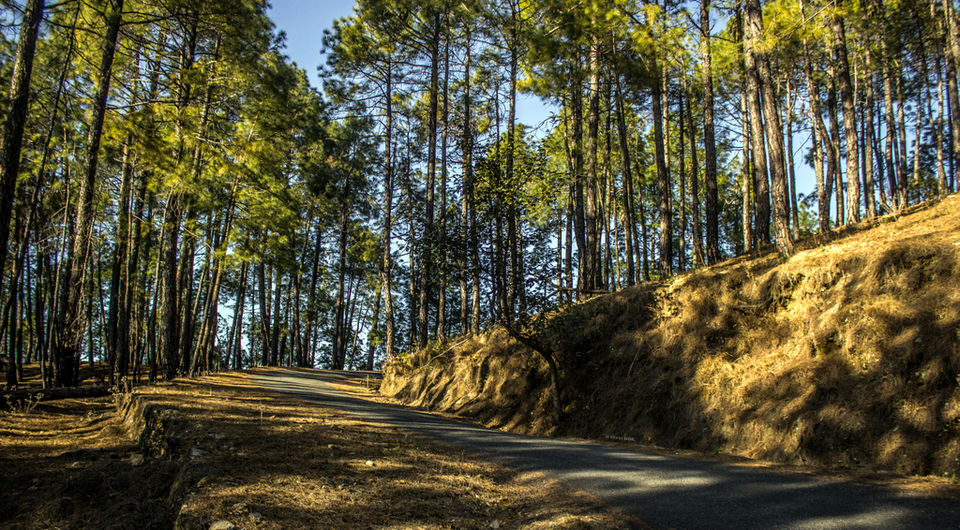 Driving through a forest of deodar, chir pine and oak with the light of the newly-awoken sun barely able to penetrate its thick cover, as the long winding road got narrower and narrower at every turn, it wasn't all that hard to believe that we'd just taken a big un-leap into an era of minimum intervention. Something that was confirmed in a few minutes after we crossed paths with a deer; it had probably come out for an early-morning breakfast and upon spotting us humans ran uphill for its secret hiding place. With that short-lived rendezvous in mind, we continued driving through the fallen pine cones, needles and dried leaves that carpeted the road, hoping to bump into some more wildlings. Humans were few and far between. 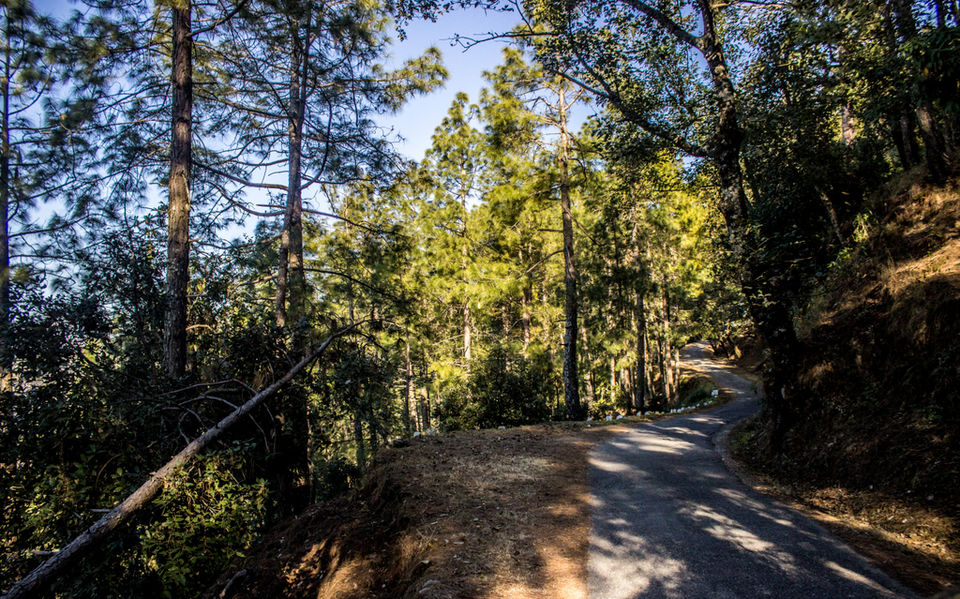 What happened next is a scene etched deep in my memory and will ever be so lucid as the years pass by. A not-too-close-yet-personal, first encounter with The Greater Himalaya in about 20 years - a glimpse of Mount Trisul (7,120 m) through whatever little empty frames the standing-hand-in-hand trees gave away. A sheer sight of visceral and cerebral grandeur that surpassed anything I'd ever seen. And if this feels like toying with the boundaries of exaggeration, it's only because up until this moment I'd been wandering about aimlessly in the foothills (mostly) with little knowledge of or love for some of the highest peaks in India. I've been chasing The Greater Himalaya ever since, trying to get as close to them as possible. But that's a story for another time.

A sneak peek at Mt. Trisul. 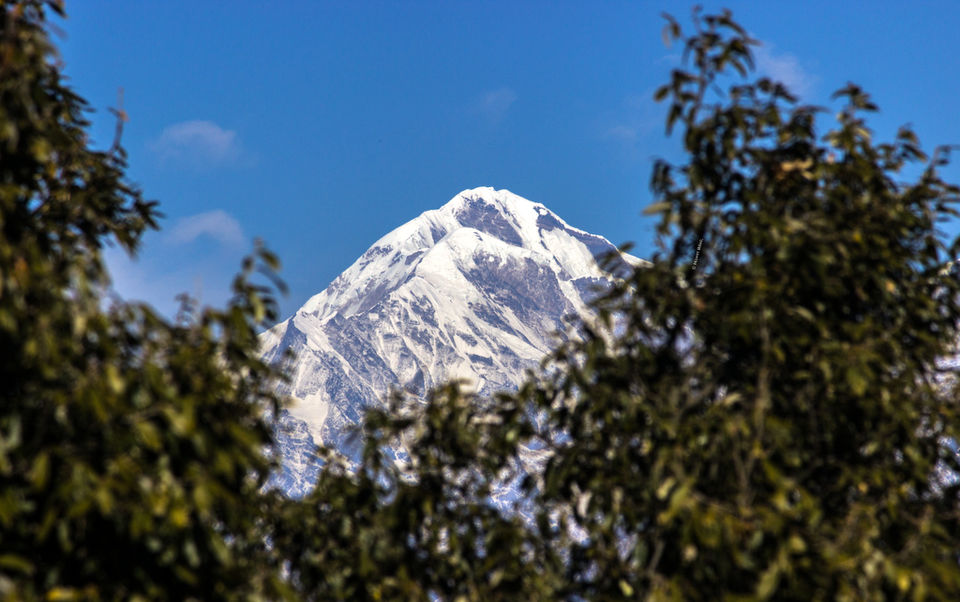 The last kilometre or so, tarmac turned to soil and it got a little difficult to steer through casually, before we reached, so to speak, our destination - Kumaon Mandal Vikas Nigam, Tourist Rest House, popularly known by its abbreviated form, KMVN TRH. While I wouldn't argue that there are much better properties (about 5 and all privately owned) inside the Binsar Wildlife Sanctuary, KMVN TRH takes the cake, and most of the tourists, for securing the best vantage point. Located at the ridge on top of the mountain-thriving forest on one side and a giant valley on the other-and overlooking a 300 kilometre wide Greater Himalayan range one cannot help but give a silent nod of appreciation to whoever from the government was in charge of handpicking these coordinates to set up the property. After a hearty buffet breakfast and dumping our luggage in the room, we tried to sleep it off.

Himalaya as seen from KMVN TRH. 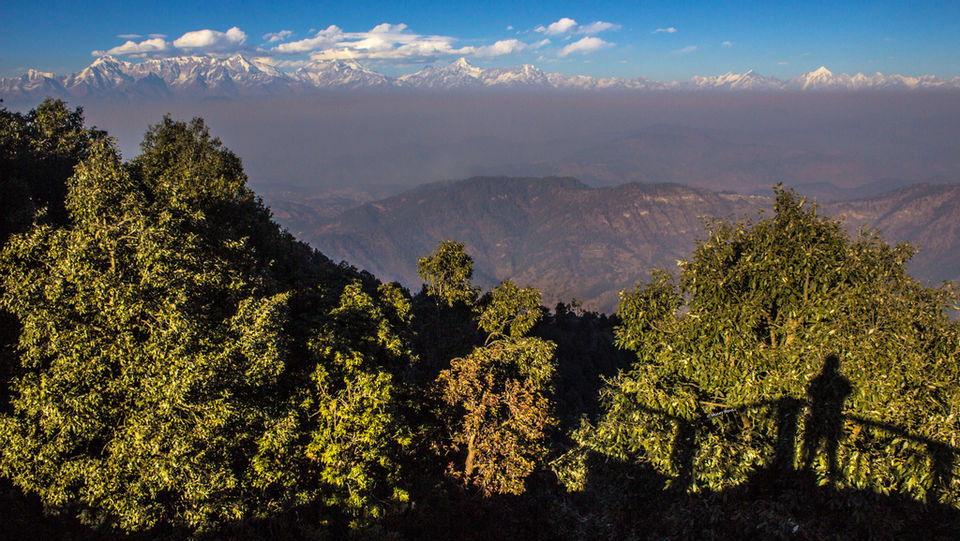 But such is the lure of the wilderness that doesn't let you stay put for too long an interval. A newly-bought pair of trekking shoes (Quechua - Forclaz 500 to be precise) were put on and out we went deep into the heart of it all, hoping to catch a glimpse of a few four-legged residents. However, we didn't encounter anything but an infrequent rustle that made us feel like we're being watched rather than the other way around, a few beautiful frequent flyers (Binsar is home to about 200 species of birds) who seemed to be having a rollicking good time in the woods, and all the silence in the world broken only by the crunch of the leaves beneath our feet and the wind.

When walking is a sheer delight. 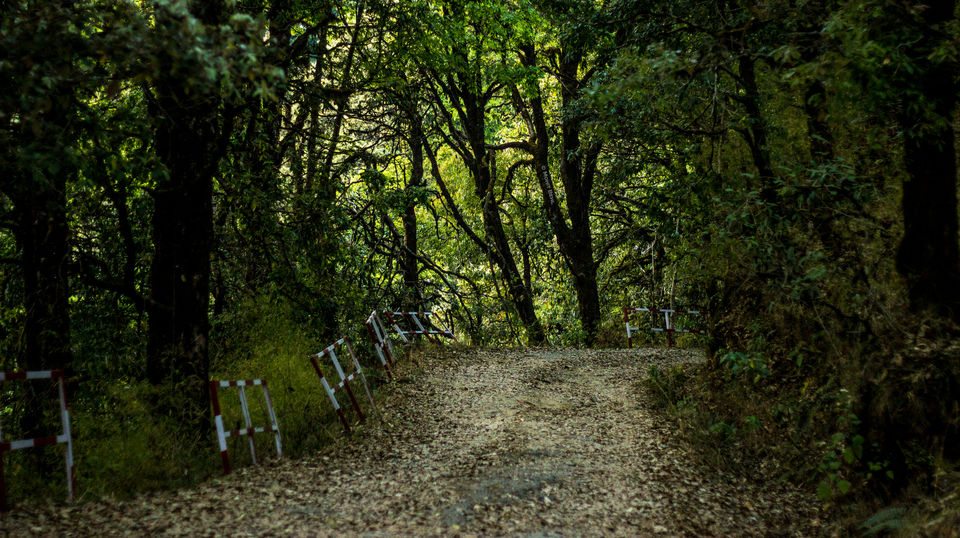 Taking a few breathers more than what was necessary and soaking in all that nature had to offer, we made our way to the Zero Point. It is nothing more than what you pass on your way to KMVN except, maybe, more of the forest and a medieval watch-tower like structure that you climb to get an uncompromising view of the snow giants. While the board at the KMVN premises said it was a 2 kilometre walk away, it felt shorter somehow. After spending a good amount of time to our heart's content, we came back, doing more of the same. The next two days, and parts of extremely cold winter nights, were spent putting our feet up, looking at the Himalaya as they changed colour and offered a different hue every passing minute, chasing sunrises and sunsets, driving to less-populated parts of Almora just for the fun of it, but most importantly, photographing these gargantuan figures of rock and ice. I'll leave you to it!

Nanda Devi and her Guardians. 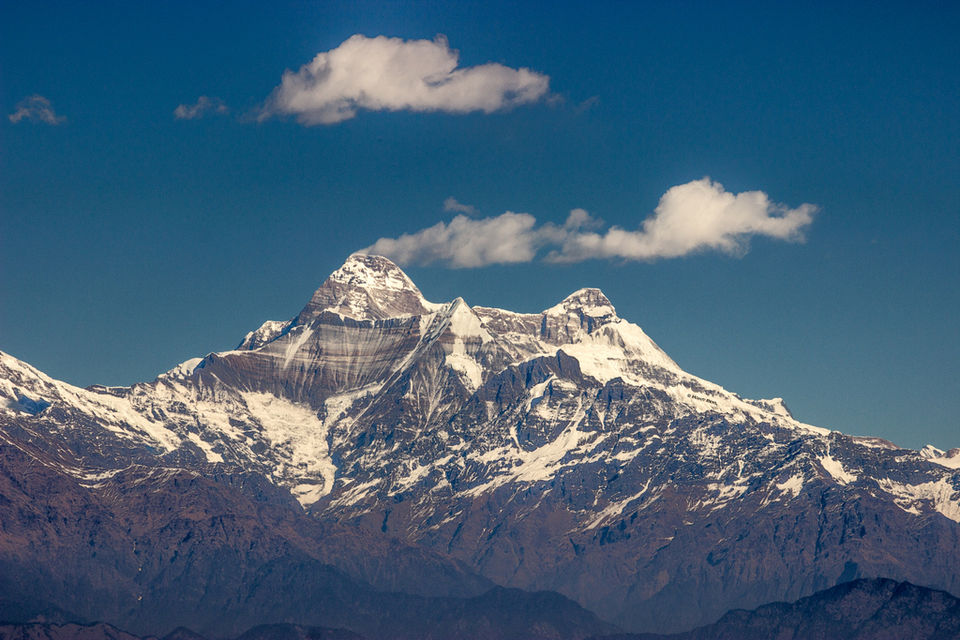 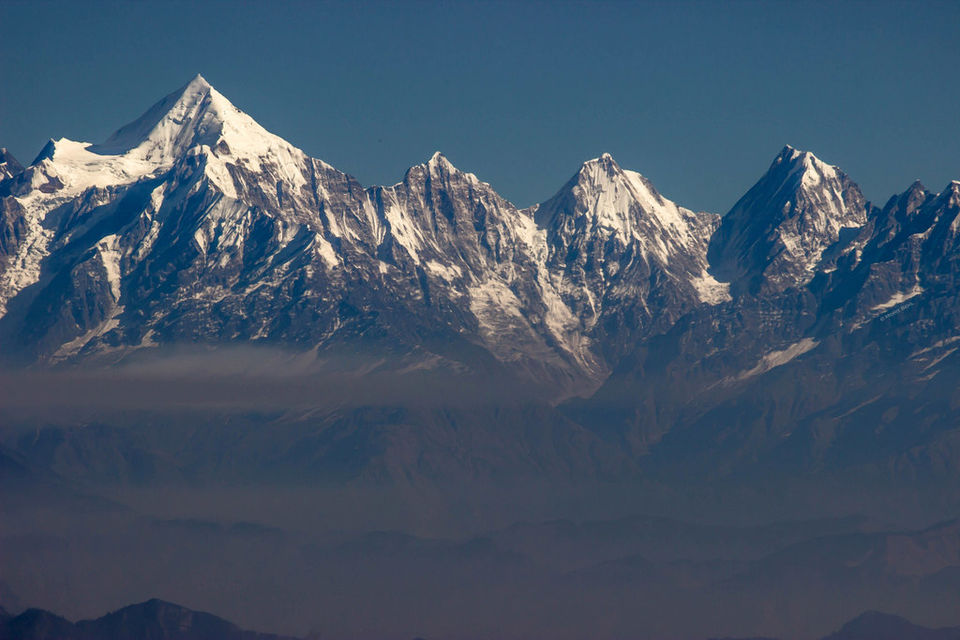 Some facts you should know about Binsar and the Binsar Wildlife Sanctuary:

Binsar was declared as Reserve Forest in 1880 and was upgraded to a Wildlife Sanctuary in 1988.

A severe forest fire in 1995 caused tree mortality to a major chunk of tree species, pushed away and possibly killed some part of the faunal population.

It was declared an Important Birding Area by BirdLife International.

It is home to about 200 species of birds including Partridge, Woodpecker, Pheasant, Thrush, Warbler, Flycatcher, Nuthatch and Treecreeper.

Binsar was once the Summer Capital of the Chand Dynasty whose kings ruled over Kumaon from 11th to 17th century.