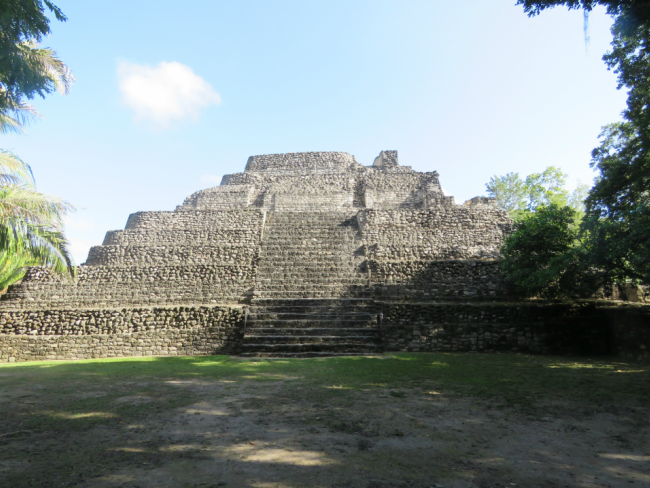 When we honeymooned in Cancun many years ago, I had wanted to see the nearby Mayan ruins. We could not afford to tour the surrounding area, though. We had a great time lounging by the clear, blue waters, but I have looked forward to another chance.

That opportunity came on a Western Caribbean cruise with a stop in Costa Maya, Mexico. There were three different options to visit Mayan Ruins: Chacchoben ruins, Kohunlich ruins, or a combo of the two. I honestly chose Chacchoben ruins because it was closer with a shorter bus ride. It was the right choice.

Costa Maya is a popular cruise ship port. We boarded a comfortable bus at the docks. The ride to the Chacchoben ruins took about an hour. We passed through scrubland, cattle farms, and small villages.

Our tour guide gave us an interesting primer on Mayan history en route. The land is almost perfectly flat. Occasionally, we would see a small hill or cluster of hills. She told us that there are no real hills in the region. Each of these hills covered an ancient Mayan structure.

Mayan settlement began in the southern Yucatan about 1000 B.C. Chacchoben became the largest settlement in the area. Most of the structures seen today were built around 700 A.D. The advanced Mayan civilization collapsed around 900 A.D.

Through the centuries, the surrounding jungle enveloped and overgrew the Chacchoben ruins. Quintana Roo was sparsely populated. It sat unnoticed until 1942 when a local farmer settled his family there. In 1972, archeologists began to explore the ruins. The Chacchoben ruins opened to the public in 2002.

A circular path in the jungle leads you through the ruins. The dense foliage still covers much of the city.

With the deep roots of trees firmly embedded in many of the "hills," it is feared that further excavation would cause much damage.

Several pyramids/temples have been exposed. They reach up to sky above the jungle plains. The pyramids are solid with no interior passages. Many smaller, rectangular bases can also be seen. Homes for the wealthy Mayans were built upon these.

Near the end of the loop, we approached a steep staircase of 36 steps. Climbing to the top, a large yard with another massive pyramid temple in the center greeted us. In ancient Mayan times, this entire hill was one massive temple. It is truly awe inspiring.

During the tour, our guide educated us on the history of Chacchoben and of the Mayan people. I knew very little of Mayan history prior to this. The unexpected and sometimes gory details painted a fuller picture. Learning of history in the actual place where events occur make them come alive.

The history is too extensive to fully share here. We learned about the Mayan creation story, human sacrifice, the Mayan calendar, ancient sports, the Tree of Life, weird shaped heads, Mayan religion, and much more. I hope that you can someday visit and learn for yourself.

The Chacchoben Mayan ruins combine the intact ruins intermingled with jungle and the decay of time. While a completely restored complex might be intriguing, I prefer the natural mix.

You are not allowed to climb to the top of the pyramids. I will admit that I was somewhat disappointed. I understand and appreciate that this will help preserve them, though. So, I am content with what I saw.

The total excursion lasted for about 4.5 hours. The time was perfect. We made friends discussing what we had seen on the bus ride back. What a wonderful day!

Visit in the winter or early spring when the weather is perfect and the mosquitos are not a problem. A tour of the Chacchoben Mayan ruins provides an experience you will never forget. Click here.