I got reacquainted with the Mayan civilization - which extended from El Salvador, Honduras and Guatemala all the way to the Yucatan peninsula in Mexico - when I saw a TV documentary about ancient cultures a few years ago. The Mayans established theirs around 2000 BC, and it flourished before the end of the first millennium. They developed math, astronomy, arts and architecture that rivaled other great civilizations. One of the places that the documentary mentioned was Chichen Itza, one of the largest Mayan city-states. It became the dominant city starting around 10th century AD, after the decline of Mayan cities such as Tikal in Guatemala, Bonampak in Chiapas, and Althun Ha in Belize, enabling it to control the Yucatan peninsula and set its hegemony. It was conquered by the Spanish conquistadores in the 17th century.

A I was armed with this historical back story when I set out on a 150-kilometer bus ride from Cancun to Tinum to visit the ancient city. Lots of other bits of history were dispensed by our guides, a Mexican professor and a post-grad student, during the journey that took us deep into the Yucatan (We made a side trip to a cenote halfway through our trip). I explored the ancient city with my two bus seatmates and another old lady from the US.

Chichen Itza is located in the town of Tinum, in the state of Yucatan. It is about 150 kilometers from Cancun, via Valladolid. The easiest way to get here would be to book a tour from Cancunm, which would cost about 450 Mexican pesos. You may also take an ADO bus from Cancun, for about 200 pesos.

The complex is open from 9am to 5pm, everyday. Entrance fee is 59 pesos. There are gift shops and stores at the entrance of the complex. There are also many ambulant vendors roaming inside, as well as hawkers peddling souvenirs.

Chichen Itza is a UNESCO World Heritage site. Climbing up the pyramids is no longer allowed.

Bus ride from Cancún to Tinum 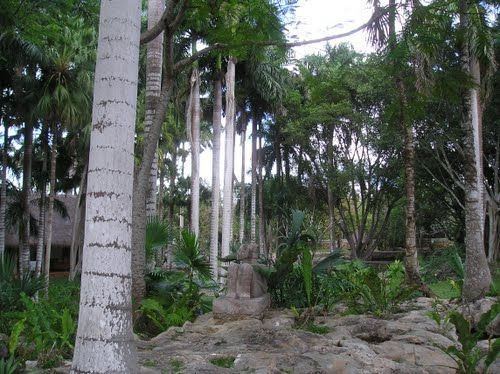 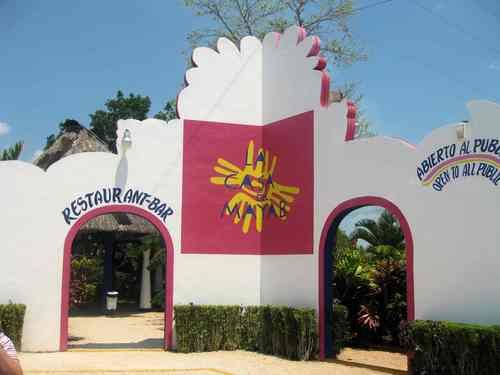 How to Get There There are literally hundreds of cenotes around the Yucatan Peninsula. The one I've been to is in Hacienda Lorenzo Oxman, in the town of Valladolid. You can arrange to go to one with the tour operators around Cancun. Useful Info They charge 50 pesos to go in the cenote in Lorenzo Oxman, but mine was included in the tour to Valladolid and Chichen Itza. I paid about 480 pesos for it (1 Mexico $ is about PhP 3.5) , and it includes lunch 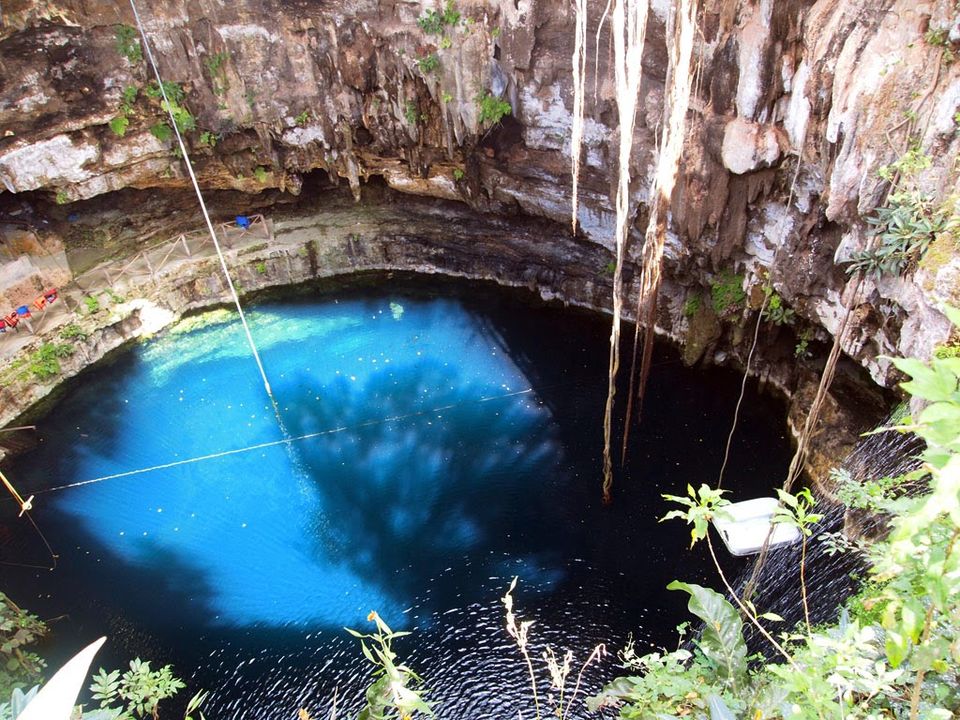 The first structure that we explored was the main reason why I wanted to visit Chichen Itza in the first place - the well-preserved pyramid that still stands in the location of the ancient city. That pyramid was called the Temple of Kukulkan. It was dedicated to the feathered serpent god of the same name (equivalent to Quetzocoatl for the Aztecs). It is also known as El Castillo, Spanish for castle, the name of which was given by the conquistadores. When I set foot on it, it seemed to me that I didn't just traveled hundreds of kilometers to get here, but that I also traveled back in time to see an ancient civilization. It was not as grand as those in Teotihuacan - the rivals of the Mayans to the north - but it was arguably in a better shape than the former. 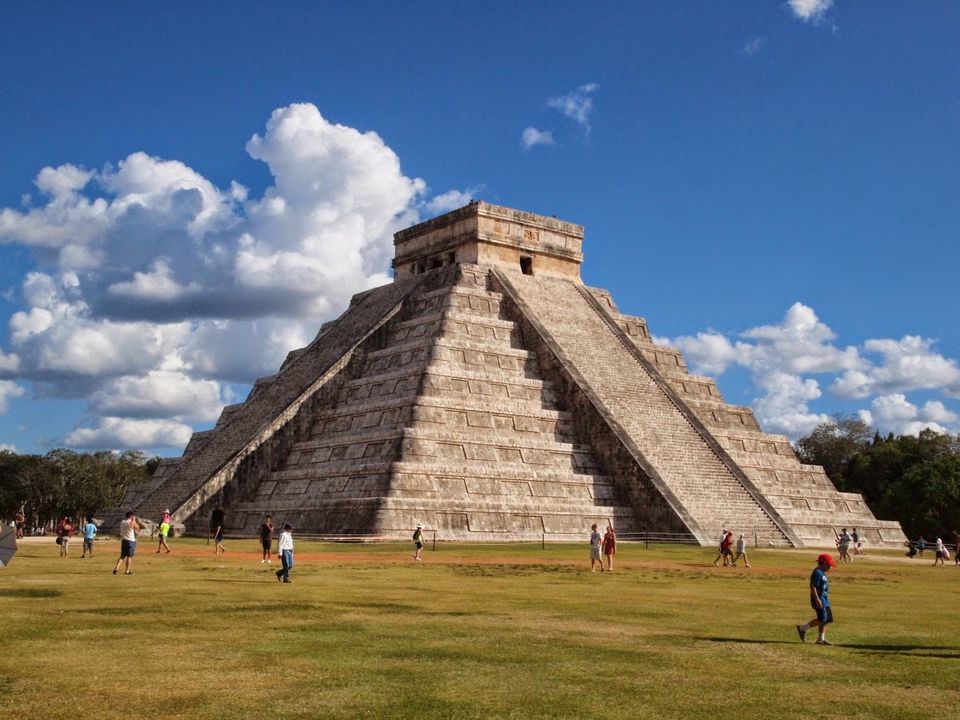 The city was not as large as Teotihuacan, but it was still immense. El Castillo, measuring 180 feet on its base and 78 feet tall, dominates the complex. Each of its four sides has 91 steps, and when added together with the temple on top, equal to 365, which is also the number of days of the Mayan calendar. During the equinox, the setting sun would cast a shadow on the steps that would give the illusion that a snake - the god Kukulkan - is descending from the temple. Another fascinating thing about the pyramid's steps is that when you stand in front and clap, the sound will bounce all the way to the top and echo back as different sound - something similar to a chirp of a quetzal bird.We stood in front of the pyramid doing this. The acoustics of the building was also designed such that the priests from ancient times can stand on top of the pyramid and can still be heard by the people below. The guide said that classical singer Placido Domingo did a concert in Chichen Itza, singing on top of the pyramid without using any sound system, and still be heard perfectly by the concert-goers. 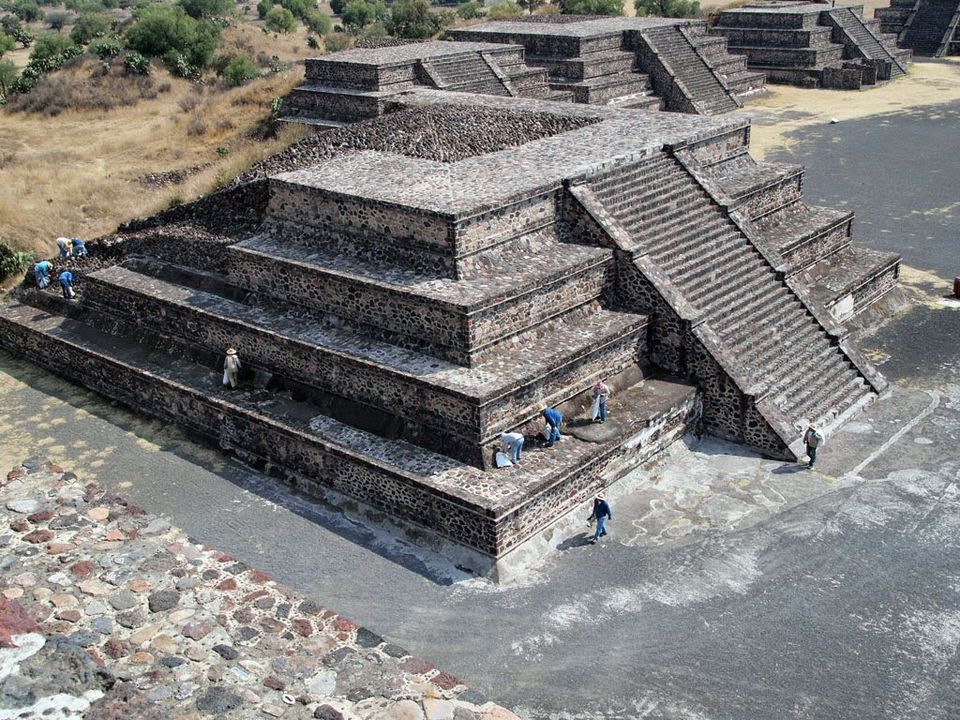 El Castillo is not the only large-scale structure in the city though. To the west of El Castillo is the Great Ballcourt, which at 550 feet long, is the largest in Mesoamerica. It is where the game called ōllamaliztli was played in ancient times. Ōllamaliztli is similar to the modern-day raquetball. Players would hit the heavy ball made of solid rubber using their hips and try to shoot them through stone rings installed along the walls running along the court. The games were only witnessed by the powers-that-be of the Mayan society, and the ordinary people are not allowed to watch them (although people play them outside in their homes). The players were handpicked from the best of the best, and the prize for winning the game is to be ritually sacrificed in the temple. Losing the game would mean humiliation as losing players were considered unfit for the gods, while winning one would mean eternal glory, although at the expense of having one's heart cut out after being decapitated. At the end of the ball court is the Temple of the Bearded Man. The building, decorated with bas-relief, probably is where the nobility and the priests watch the games. Two more temples - the Temples of the Jaguars - were built on top of the walls flanking the court. One overlooks the court, while the other faces the main plaza. These temples were decorated with bas-relief too, with the serpent the predominant motif. 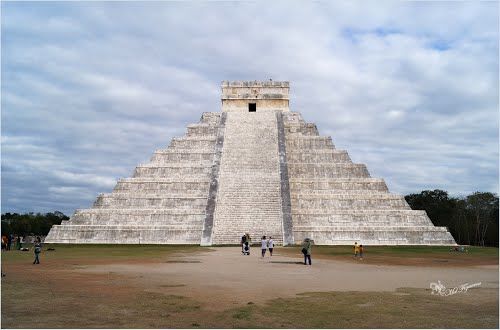 Adjacent to the great ballcourt is the tzompantli, a rack where the skulls of warriors, captives, sacrificial victims, and the winners of the games were displayed. The skulls were strung together through the sides, like that of barbequed meat. Beyond the tzompantli are two platforms, the Platforms of the Eagles and Jaguars, and the Platform of Venus, dedicated to the planet that figured so much in Mayan astronomy. Beyond it was the Sacred Cenote, the water-filled sinkhole that became a pilgrimage site for the Mayans. Archaeologists recovered human remains, gold and other offerings from the bottom of the cenote. It's not as big as the one in Hacienda Lorenzo Oxman though. On the east side of El Castillo is another stepped pyramid called Temple of the Warriors. On the top of the pyramid is a chacmool, a sculpture depicting a reclining human figure. On the figure's stomach is a bowl where human hearts are deposited during the ritual sacrifices. 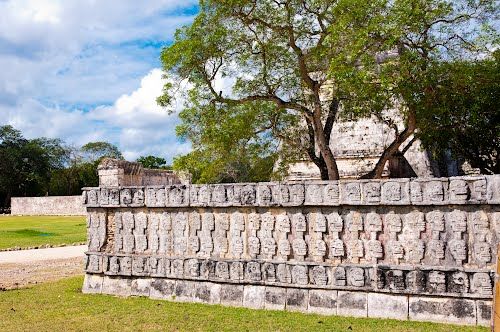