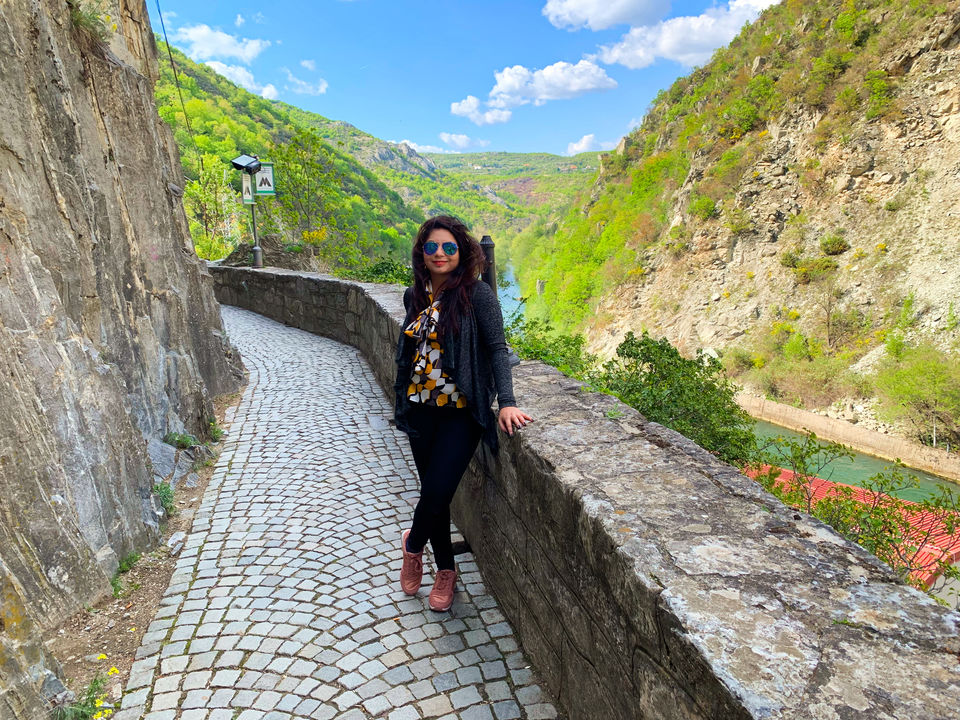 During long weekend of Easter’2019 I traveled to Eastern Europe- 3 countries (Macedonia, Serbia and Bulgaria) of Balkan peninsula, in 5 days. Each of the former Yugoslavian cities hold such a variety of historical background and vibrant folk culture it's very difficult to acquire the essence of the true delight of the country. But this itinerary is effeminately the best one to cover most of it if you have short time. This is my adventure in Skopje, Macedonia – the full travel story of 24 hours.

Why should you visit Skopje.

Skopje is the capital city of Republic of North Macedonia. Till 20th Century, the region was under Otoman Sultanat rules, post WWI it became the part of former Yugoslavia. The city architecture is highly influenced by Oriental-Byzantine era, the 15th Century’s Stone Bridge on the Vardar river and the 5th Century’s Kale Fortress hold such fascinating appeal to the photographers. The gorgeous Balkan ranges, the breathtaking canyons of Matka river, the city skyline of Skopje and her magnificent architectures were enough to fall in love with this city! The city is fun, people are friendly, the shopping streets are full of charming handmade stuffs as well antiques and the plus point is -The statues everywhere made a statement of its own. Skopje should be in backpackers’ list during early summer.

How to make the most of your one day in Skopje.

This Fantastic Itinerary starts 8'o clock in the morning, to the majestic Matka Canyon (4.5 hours), and continued city sightseeing for the rest of the day. We left Skopje 11:30 PM overnight bus to Belgrade(Serbia). When spending only one day in Skopje I suggest starting as early in the morning so you will have enough time to explore the main sights without rushing too much. It will also be cooler weather and less queue at the boat ride in Matka Canyon.

We started our day at 8 in the morning, to visit Matka Canyon. Taking the public bus(Route 60) from the main bus station of Skopje, it took us roughly 45 minutes to reach, the road was full of natural beauties, cute waterfalls and rivers along the way.

Matka Canyon- Located to the west region of the capital city, Matka Canyon (and the lake) is the most popular outdoor destination in Macedonia. Famous for its jaw dropping natural beauty, cave tours and adventurous river rafting, this region is also home for several medieval monasteries hidden in the mountain away from public eyes for centuries. The protected forest area is home to a wide variety of plants and animals, roughly 20% of the which is endemic and only found here! The canyon is also home to 77 indigenous species of butterfly and the most venomous snake in south Europe the Viper. The 1.5-hour boat ride along the canyon and caves was 15 Euro for 2 person which I would highly recommend doing.

We returned to the city post 12 in the afternoon, Indulged into the juiciest kebabs and fresh breads in a local restaurant, we then started our city tour. The first stop was

Kapan Han - This 15th Century Inn is now turned into a museum keeping the vibes of Ottoman era as intact as possible. Ticket price is €3 per person, children below 8, have free entry.

Skopje Fortress- Near the Old town, located on the highest point of the city, Kale fortress is now ruin of the massive 5th Century’s Byzantine fort which used to be the citadel. The recent excavation discovered clay ornaments and woodwind instruments dated back to 3000 B.C. Entry is free to the sight. The Fortress has the most gorgeous view of Vardar river and the Balkan ranges, Millennium Cross on top of the Vodno hill can be spotted from here.

Mustafa Pasha Mosque- Coming down from Kale fortress the next stop was Mustafa Pasha Mosque, built in 1492 A.D on honor of the one of minister from Ottoman Court. The mosque was built on the site of an old Christian church. Women are not allowed inside the Mosque. Beware of pick pocket in the premises of the mosque, few homeless people are staying here who would ask for money. We have lost our selfie stick and water bottle here.

Old town, Kuršumli An, Old Bazar- Down the road from the Mosque, led to the Old town and Old bazar. Here you can find many shops selling artifacts, old coins, Persian carpets, handmade abayas(burqa), sheesha and what not! Mouthwatering smell of the fresh lamb kebabs will take you back few centuries, to the Ottoman Sultanat period when this Bazar used to be another stop for old silk route. Few notable stops are- Čifte Hamam (Public Bath built in 14th Century) Isa Bey Mosque, Daut Pasha Hamam (another 15th century hamam operated till 1915), Aladža Mosque, Kuršumli Han (caravanserais built in 16th century, still operating).

The Holocaust Memorial Center- This memorial is dedicated to lost lives of the 7,148 Jews during WWII of northern Macedonia.

Art Bridge, Walking Street and River side- All the quirky statues, magnificent arts and boutiques of handmade crafts are on the both sides of the Vardar river. The city is one of the most beautiful masterpiece of art and architecture, which makes it unique and vibrant. 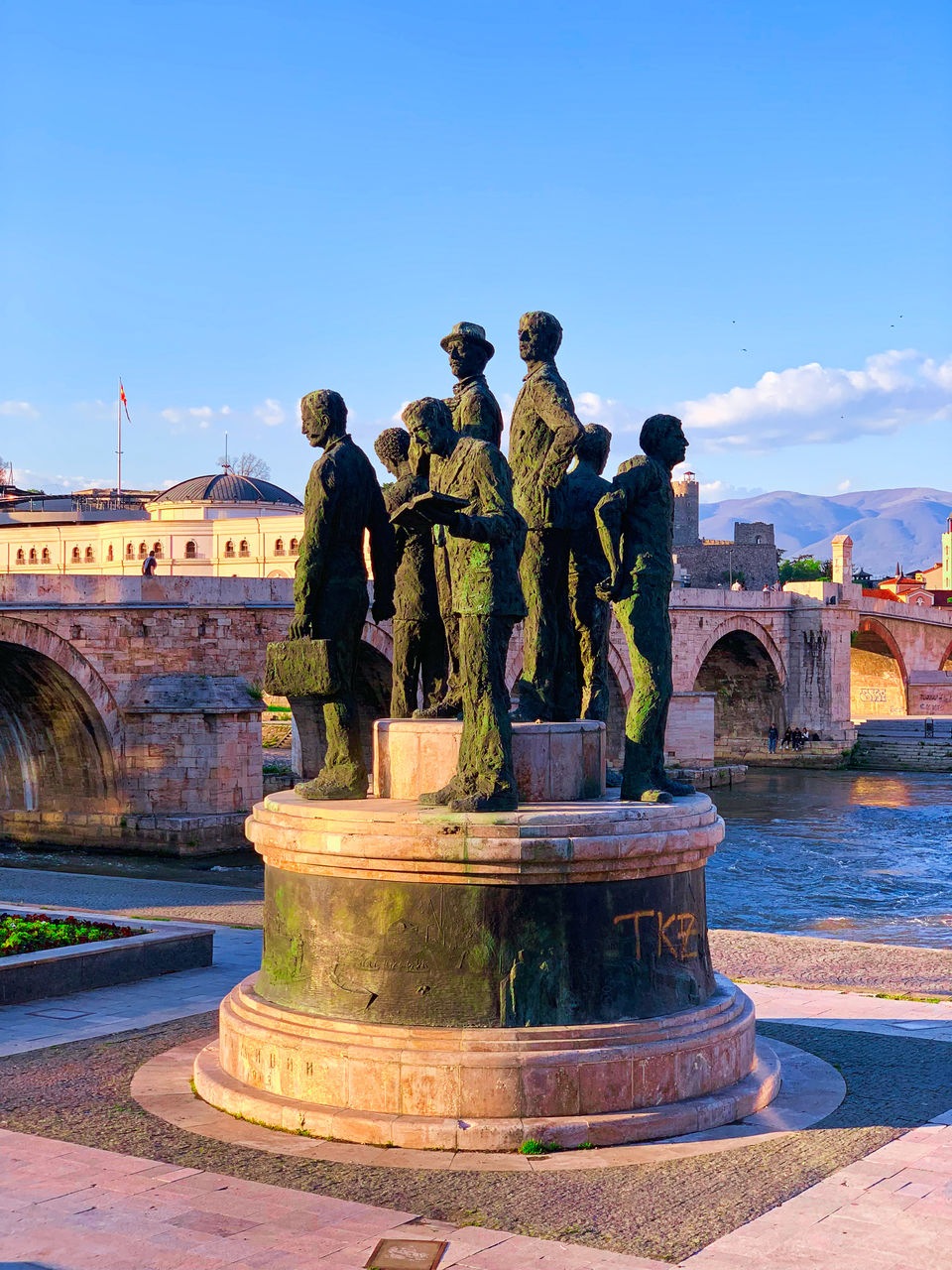 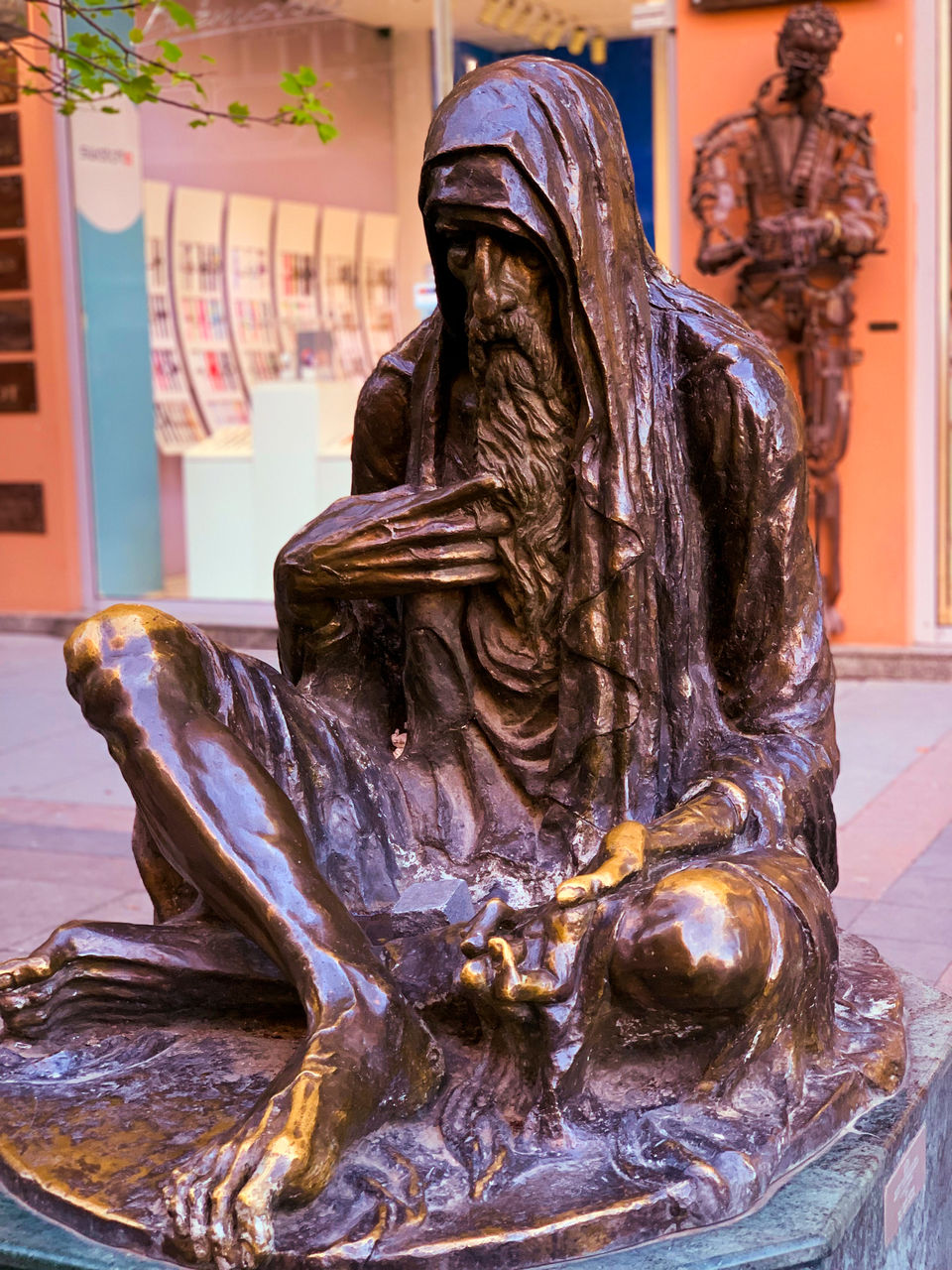 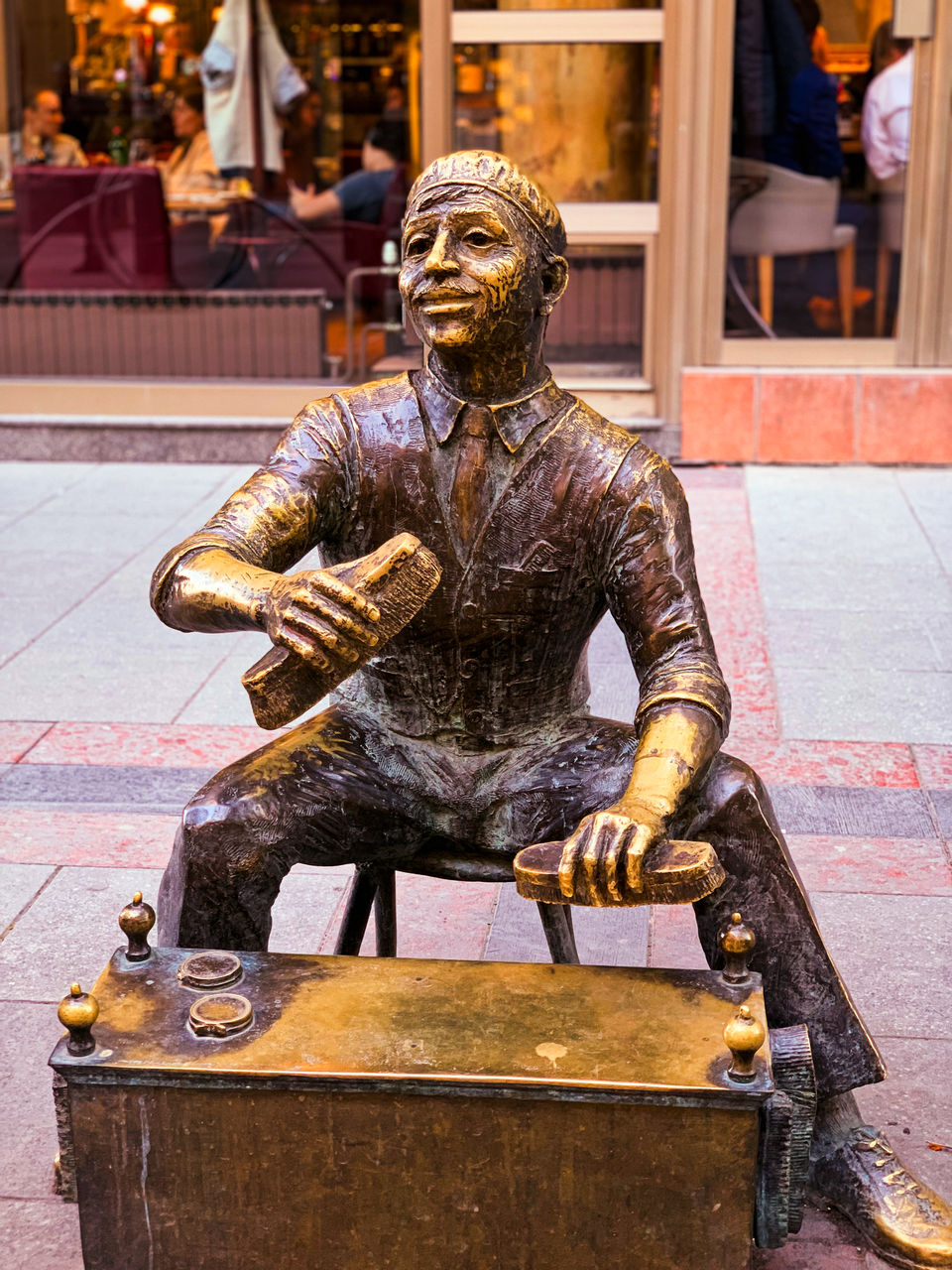 Grand fountain of Alexander the Great- Skopje is famous for its quirky statues and stunning architecture. This fountain at the center of the walking street of Skopje city center is an aspiring engineering marvel. The work is still under progress and is going to be the biggest fountain in eastern Europe. 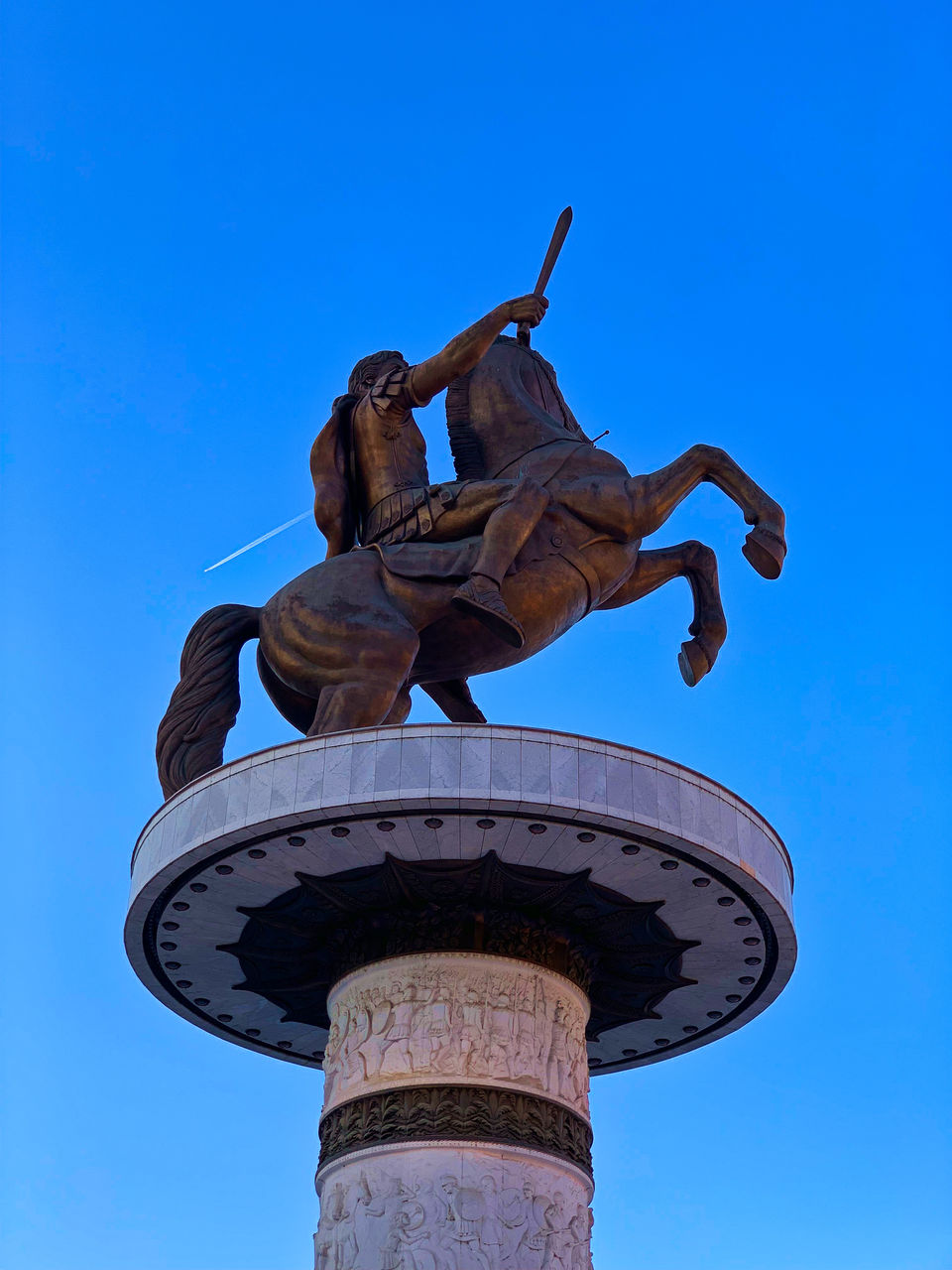 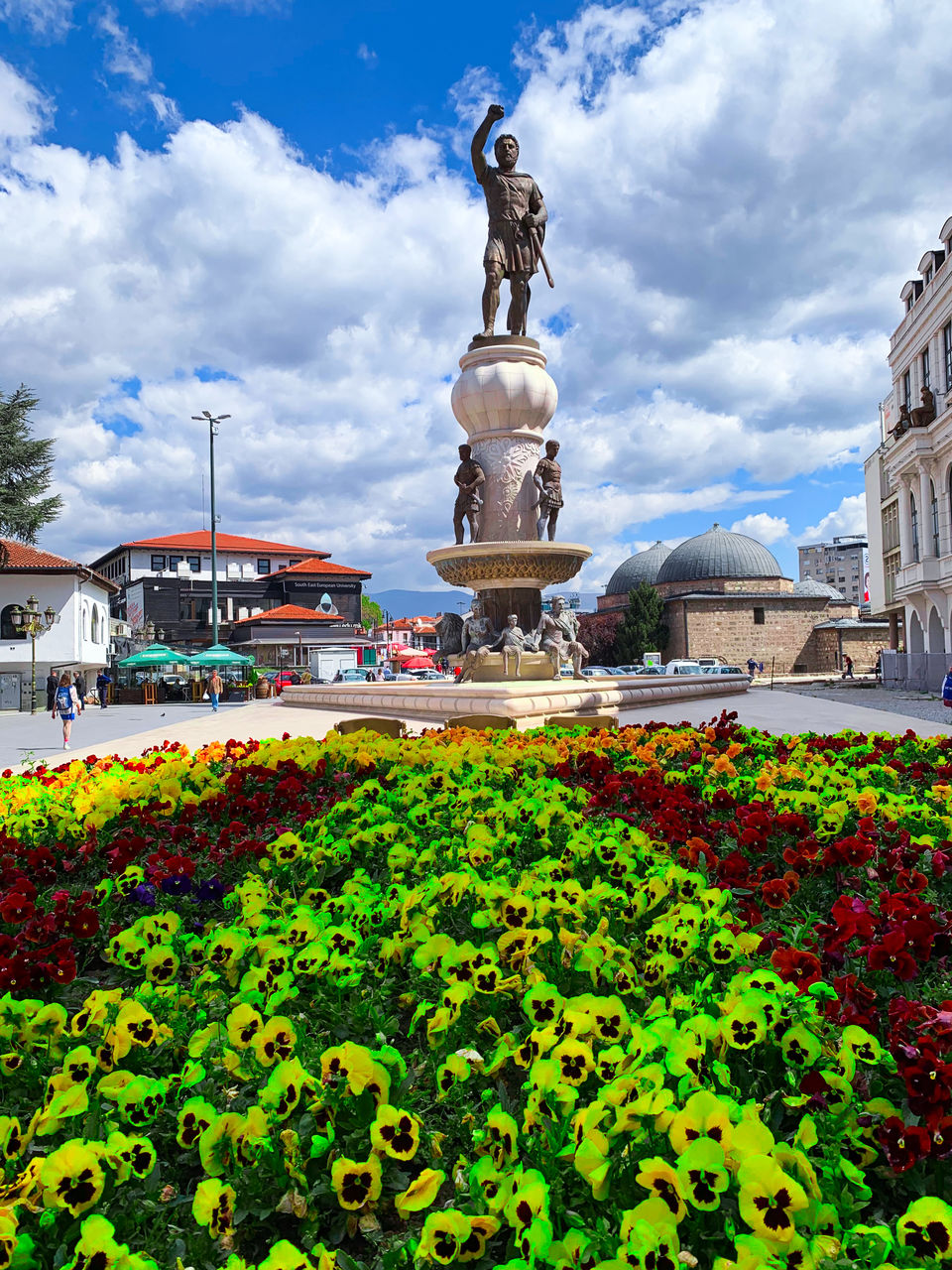 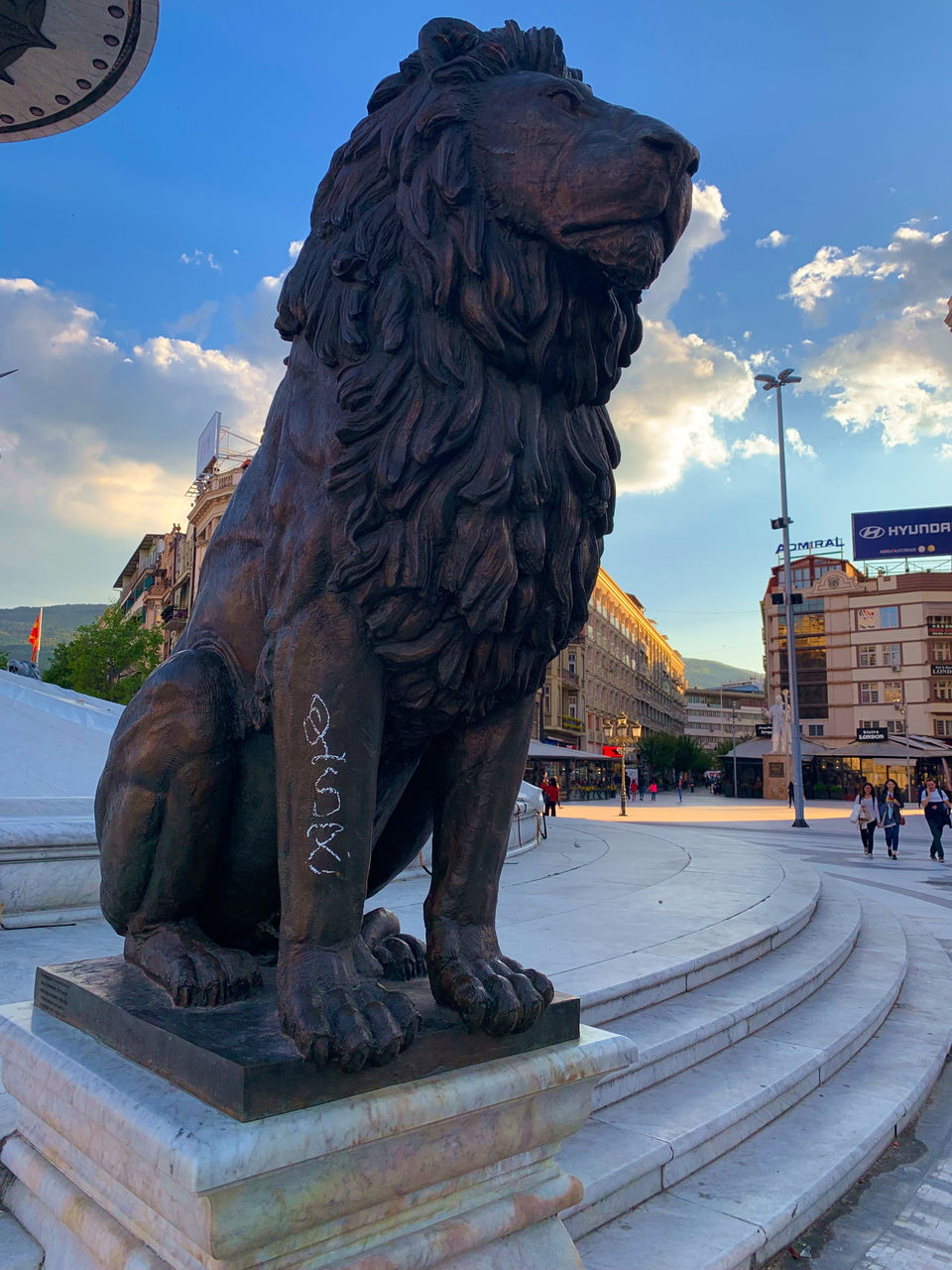 Stone Bridge- Over the River Vardar, Stone Bridge is the oldest surviving bridge, considered a symbol of Skopje and is the main element of the city's coat of arms, which is incorporated into the city's flag. 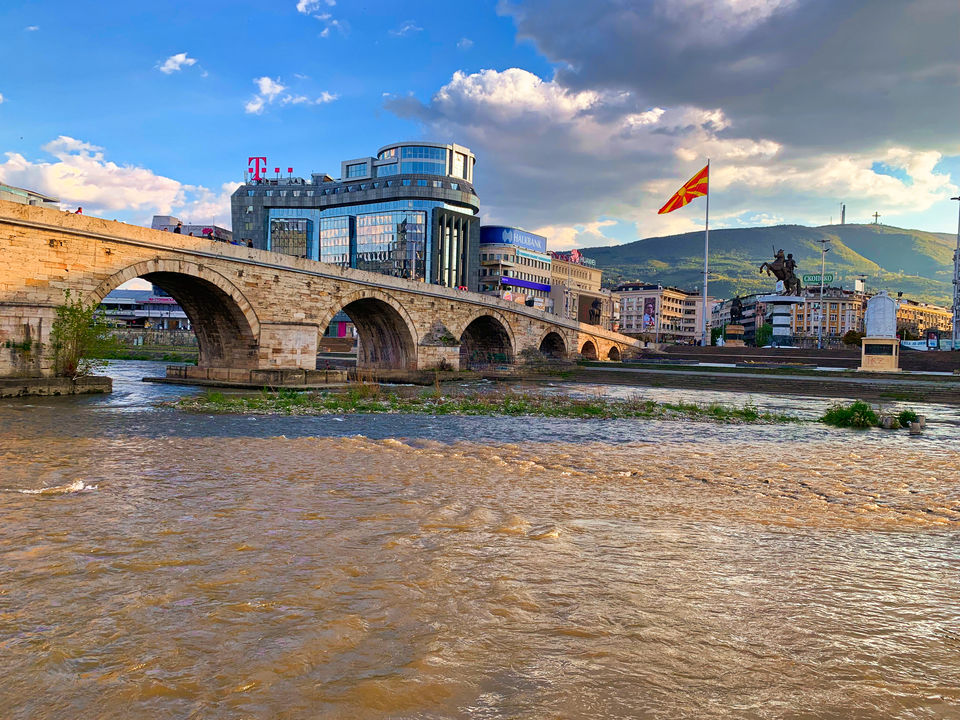 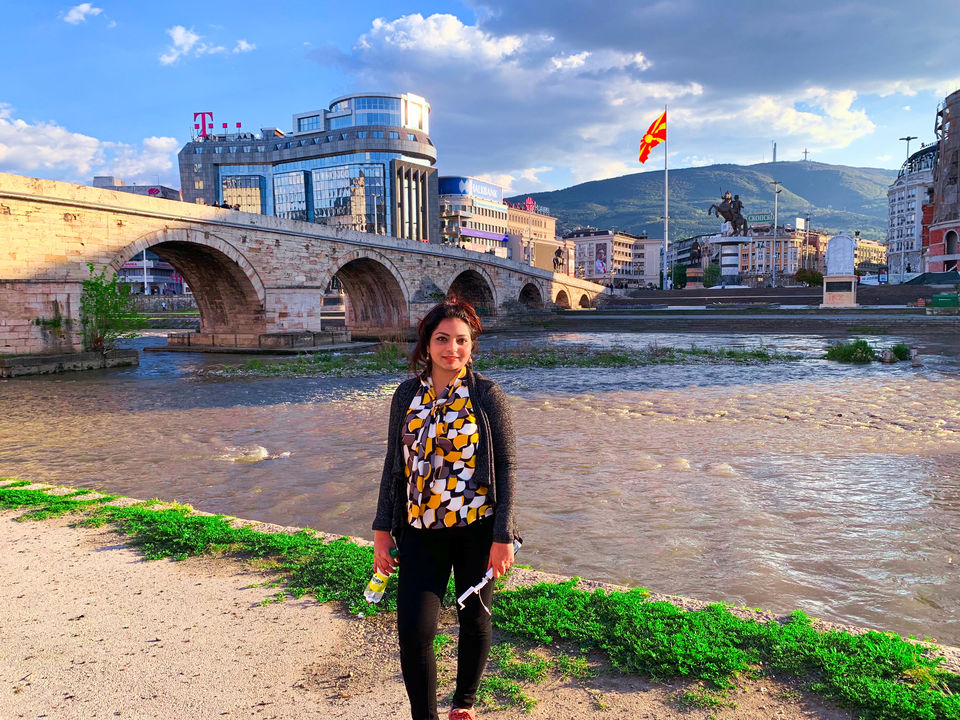 Archaeological Museum of Macedonia: One of the oldest museums in the country, this museum is located in the old bazaar in Skopje, near the Skopje fortress. Entrance is €5. 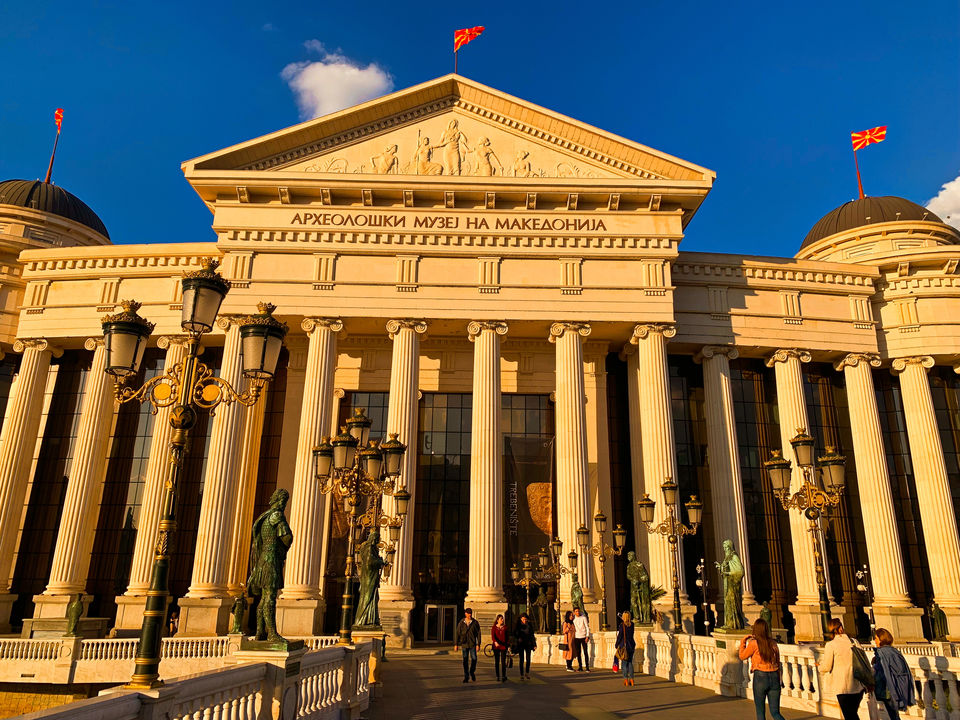 House of Parliament and the Museum of Art- On the side of the Vardar river, these two buildings are architectural genius. Must see for the quirky statues and offbeat sculpture around the place. 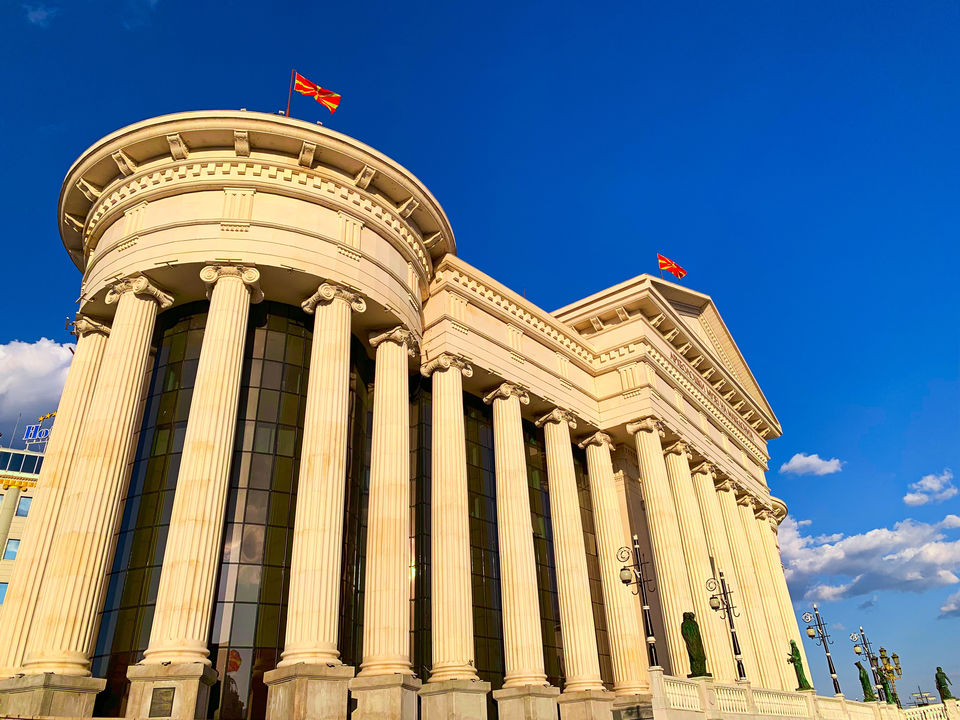 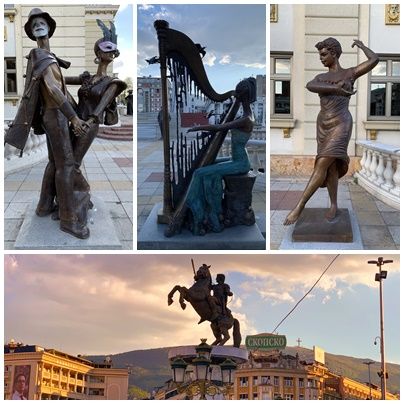 Memorial House of Mother Teresa- Skope is also the birthplace and hometown of St. Mother Teresa for 18 years, until she moved to Ireland and lived most of her lives in India, doing missionary works in slums of Patna & Kolkata, working with lepers, blinds and homeless people. She won Nobel Peace Prize in 1979. The papers are kept here in Skopje at her paternal house which is now a memorial and museum. 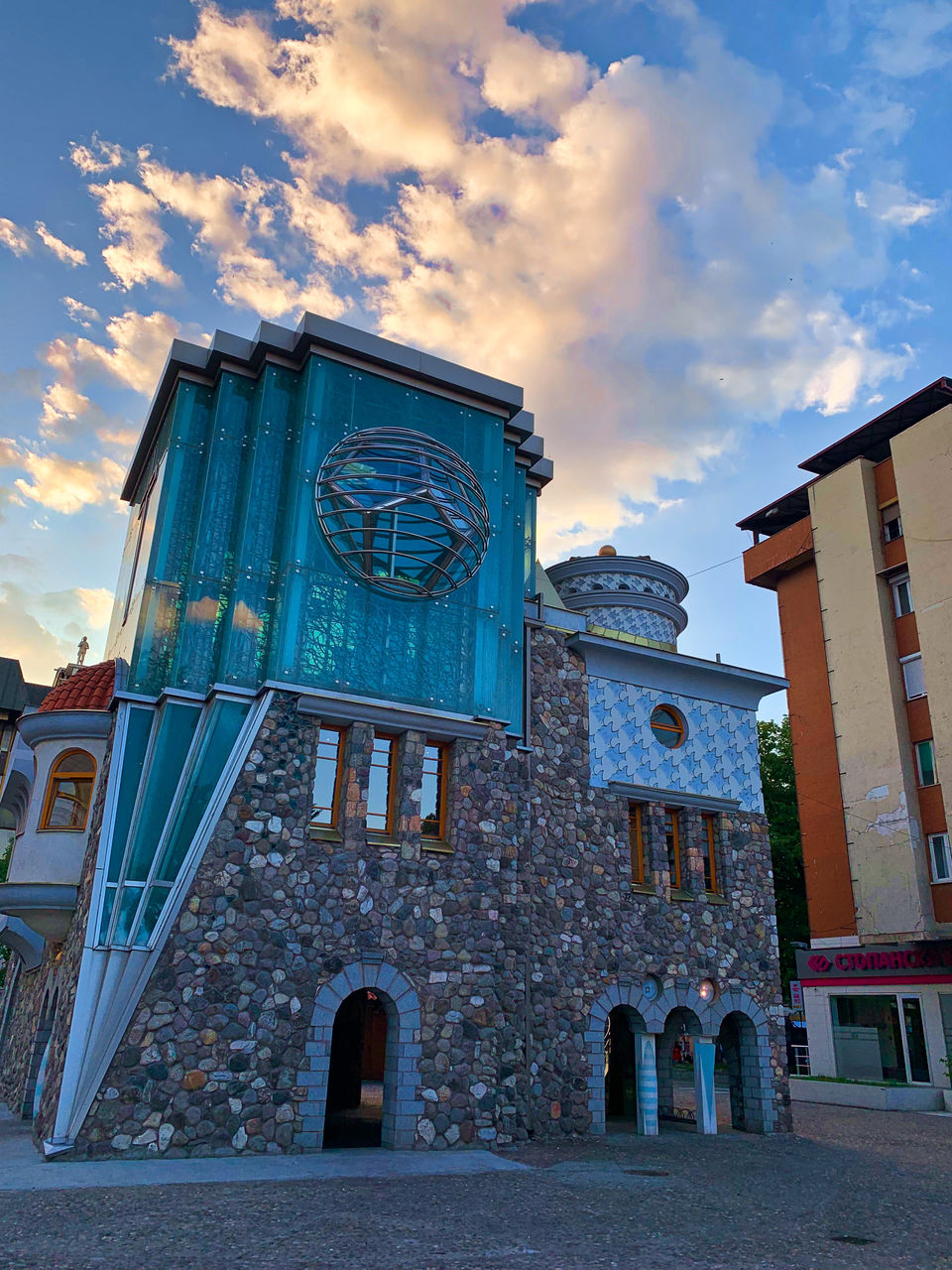 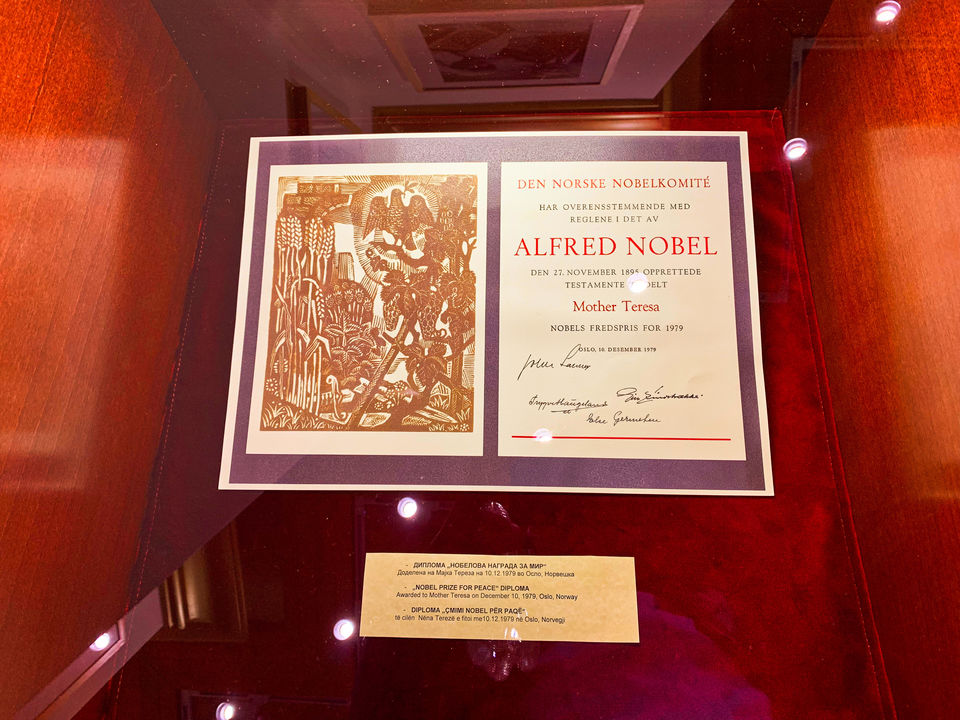 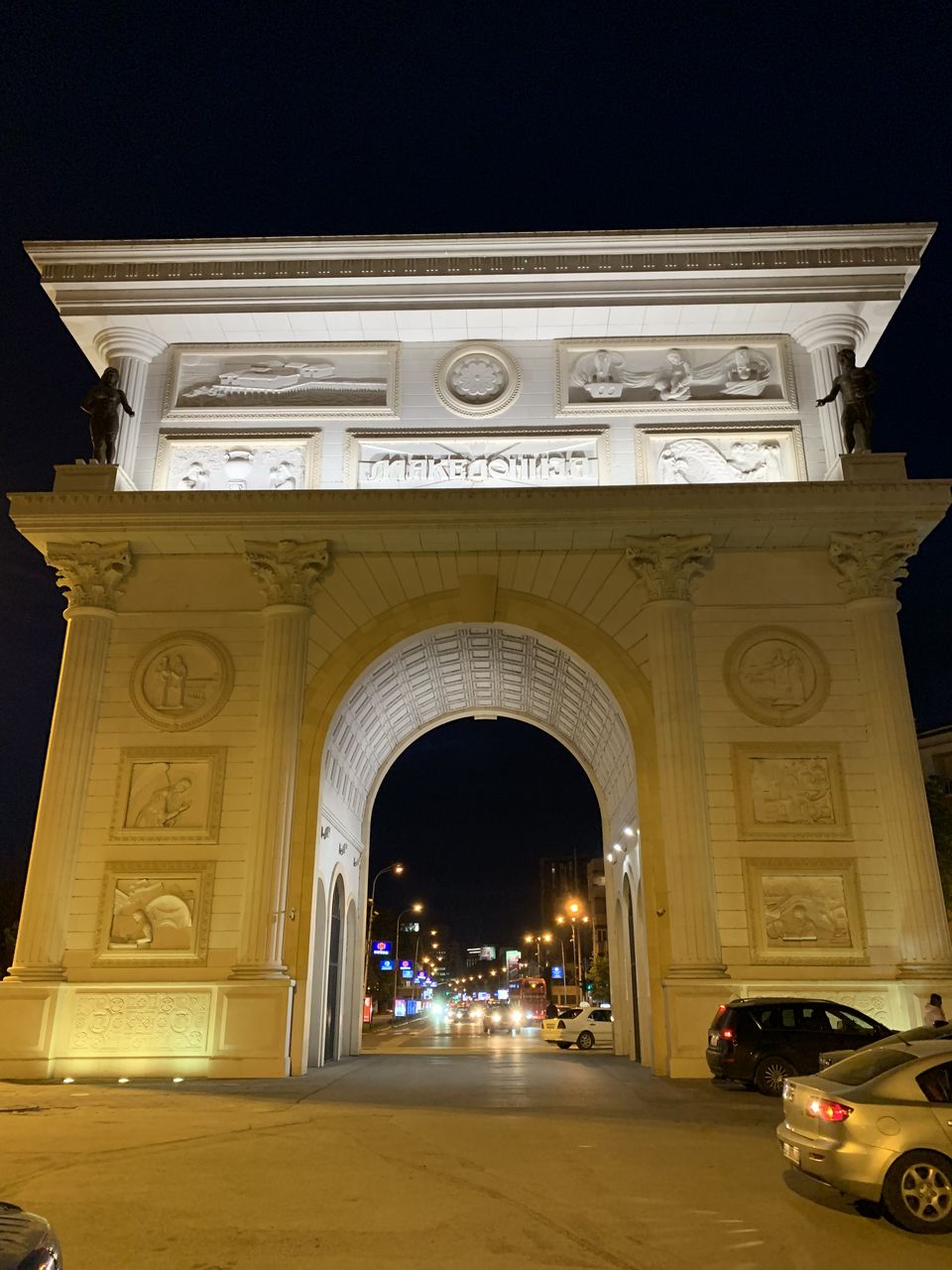 Church of St. Clement of Ohrid- The largest cathedral in the Macedonian Orthodox Church today, is open till 5 PM. Photography inside is strictly prohibited.

Millenium Cross & Vodno hill (away from city)- This 66-meter-high cross on the top of Vodno Mountain is about 15 km outside Skopje. Easy to locate from any location of the city, this cross is one of the highest crosses in the world. Public bus takes about half an hour to reach, then €3 for the cable car which takes you to the top, open till 7 PM.

Considered as dry and temperate during summer and unpredictable sudden rainfall, best time to Travel to Skopje is March to June, again from September to November. July and August considered as hottest months, sometimes high as 34 degree Celsius. Keep sunscreens, carry enough water, hats/umbrella to shield from the harsh sun while travelling to Macedonia.

Skopje is a very small city, the city sightseeing can be covered by walking. There’s no Hop ON Hop off buses available although I saw few private tour guides doing trips in 16-seater Mercedes van. To go to Matka Canyon, you have to take public bus (Route no. 60) from the main bus station, leaves every one hour and takes 45 minutes to reach. The last bus departs at 5:45 PM. Skopje International Airport is the only main airport to connect with rest of the Europe. Flixbuses are cheap and well connected to Serbia-Bulgaria. I won’t suggest renting cars because outside of the capital, highways are not in great condition.

Fresh breads and kebabs are the most consumed food in Skopje. Zelnik is a must try and available almost every bakery. The fresh Kebabs(Kebapi) are also seen everywhere, mainly in the Old Bazar area– fresh minced meat of lamb or beef rolled in a sausage shape, often grilled in charcoal. Most of the local shops accept international credit cards, but I would suggest keeping the local currency (MKD) in handy just in case.

The unique wooden dolls or woolen garments are nowhere to be seen except Macedonia. The silk scarves, handwoven oriental dresses, handkerchief are hard to resist. If you are into antiques, you can get great deal in the old bazar on brass candle stands, lamps, ornamented plates wooden horses or metal armors.

Compared to other European countries, Skopje is relatively cheap and plenty of good hotels available within range of €20-40 per night.

A solo girl traveler and history geek by heart, I have been to 25 countries, three continents. I am passionate about medieval history. Florence is my most beloved place to be. I love nature, mountain hiking, or brushing through old towns of Europe. A full adventure lover. My favorite experiences are hiking to summit of Mount Evans (14,130 ft, Colorado), driving through Rocky Mountain National park in night, met sudden wildfire in the roads of Lake Tahoe (California) and once being lost in highlands of Scotland. I am also an engineer, working in IT industry. Feminist and animal lover.