Greece Travel GuideGreece TripsNaxos – The Unsung Island Of The Cyclades

Naxos – The Unsung Island of the Cyclades 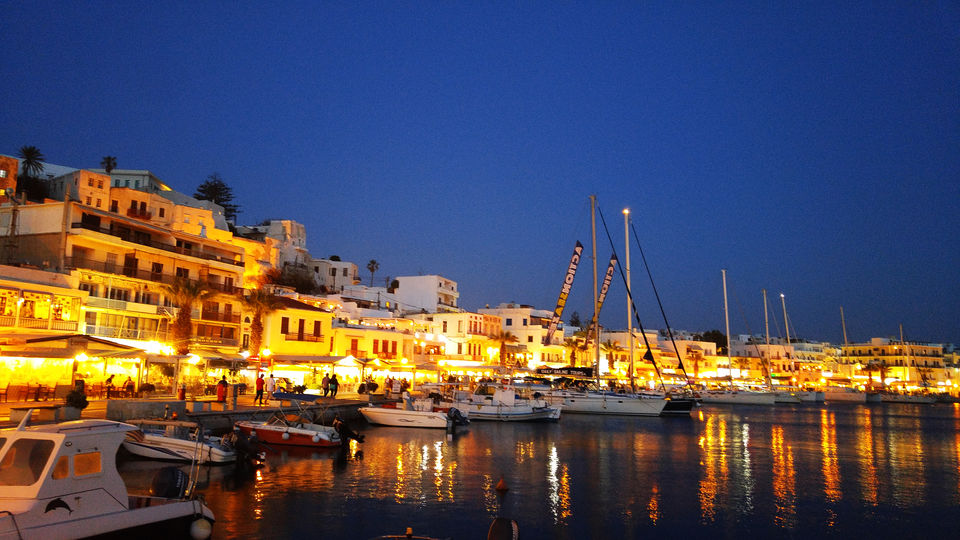 Greece is blessed with 6000 islands scattered in the Aegean and the Ionian Sea. The Cyclades consist of 220 of the 227 inhabited islands. The lesser known island of Naxos is the largest of the Cyclades with a glittering waterfront, desolate beaches, mountain villages with ancient steep cobbled alleys, historic ruins and a fascinating history of Olives.

Did you know that the popular ‘Swag se karenge sabka swagat’ song from a Salman Khan movie which also starred Katrina Kaif was shot in the Apollo Temple here? Overlooking the Aegean sea, only a single 2500 year old massive structure remains – a doorway to nowhere. Construction started around 530 BC and was abandoned by 506 BC when the ruler was overthrown. Since the temple was never finished, the subsequent rulers started using the marbles for building other structures in the island. The doorway however was so huge that it could not be transported or used.

Ruins of Portara - Temple of Apollo 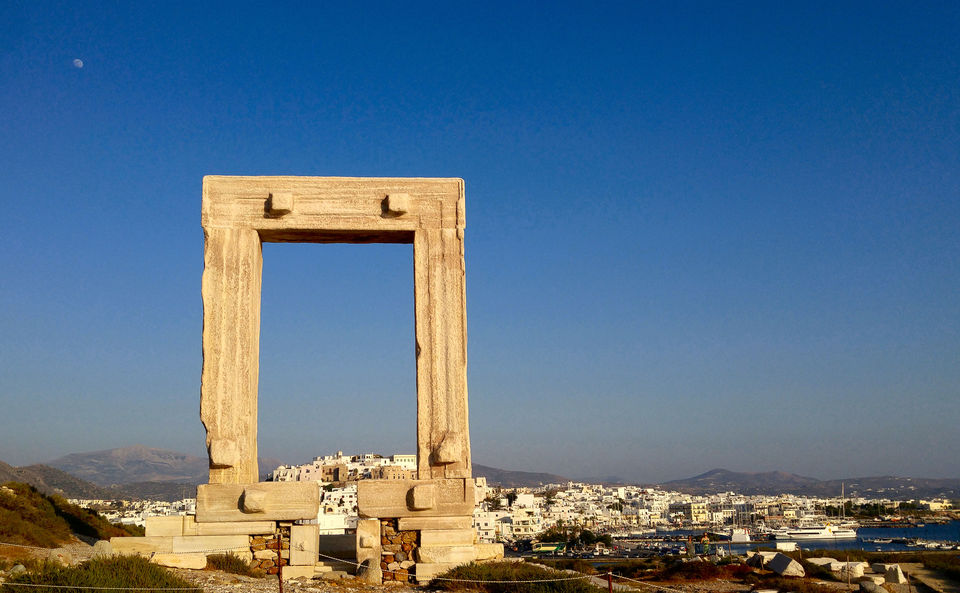 The most happening part of the island is the port. With options aplenty, one would be spoilt for choices. Almost all the open air restaurant serve Greek cuisine along with Italian, Mexican, Continental, Chinese and Indian. Ice cream and Crepe parlors dot the promenade. If you are not up for these gastronomic delights, you can just stroll in the glittering evening lights of the port or just sit on one of many benches facing the Aegean Sea and watch the bobbling boats on the marina.

Walk leisurely in the ancient old town of Naxos (just behind the current waterfront promenade). It is a mix of labyrinthine steep cobbled alleys amidst gigantic stone walls. Built in the early 13th century, the castle was considered to be impregnable due to its pentagonal design with entry and exit only through three gates. It is the only castle in Naxos with a round shape. Few atmospheric cafes and restaurant sit outs add to the charm of this place.

Alleys inside the Castle 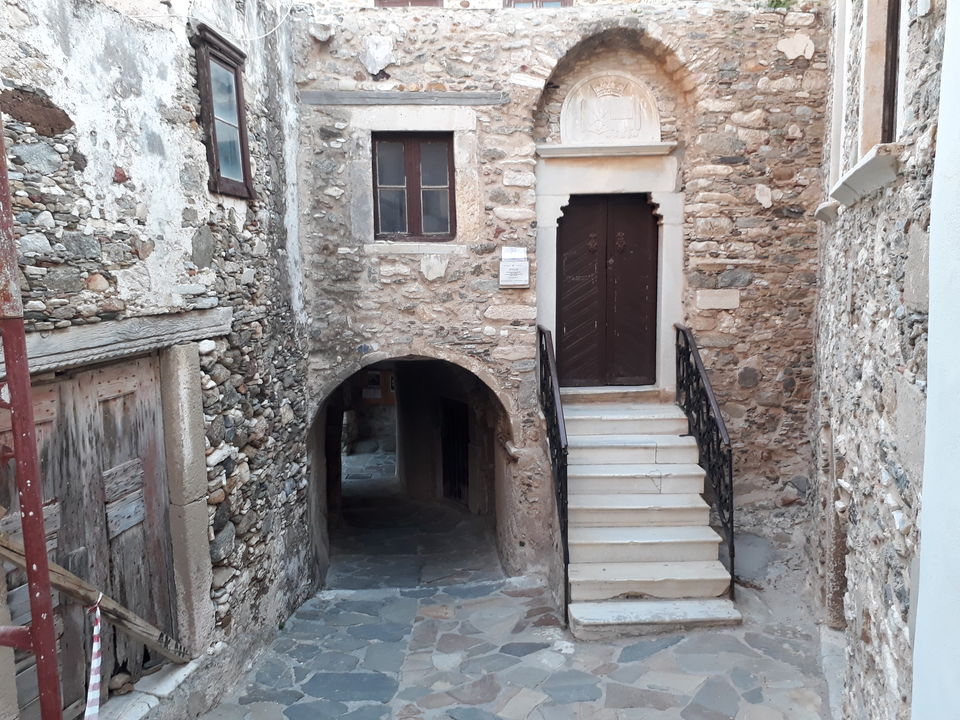 The beautiful Temple of Demeter

Located in Central Naxos, this beautiful temple was believed to be built during 6th century BC. Demeter was considered to be the Goddess of grain, the reason why it was built amidst agricultural fields making it one of the most picturesque ruins of Greece. Discovered in 1949, it took more than 30 years to renovate the structure to a basic form. It was believed to have been ruined during the Arab invasion in 3rd century AD. It is 10 km from the main town of Naxos. 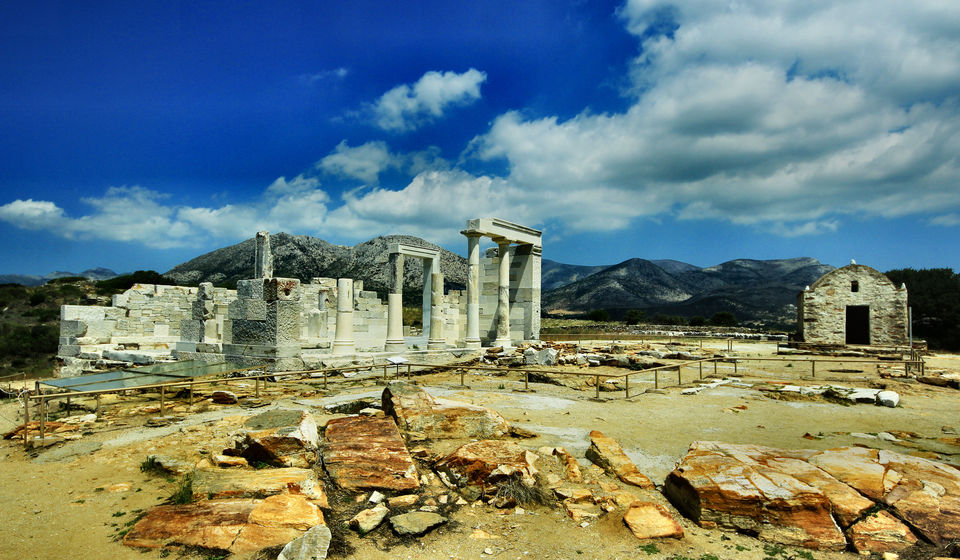 The eerie Church of Agios Nikolaos

Near the Temple of Demeter lies this eerie single aisled domed church. Access to this Church is difficult. One has to walk down to have a close look. The interiors are replete with frescoes depicting Jesus Christ’s life. 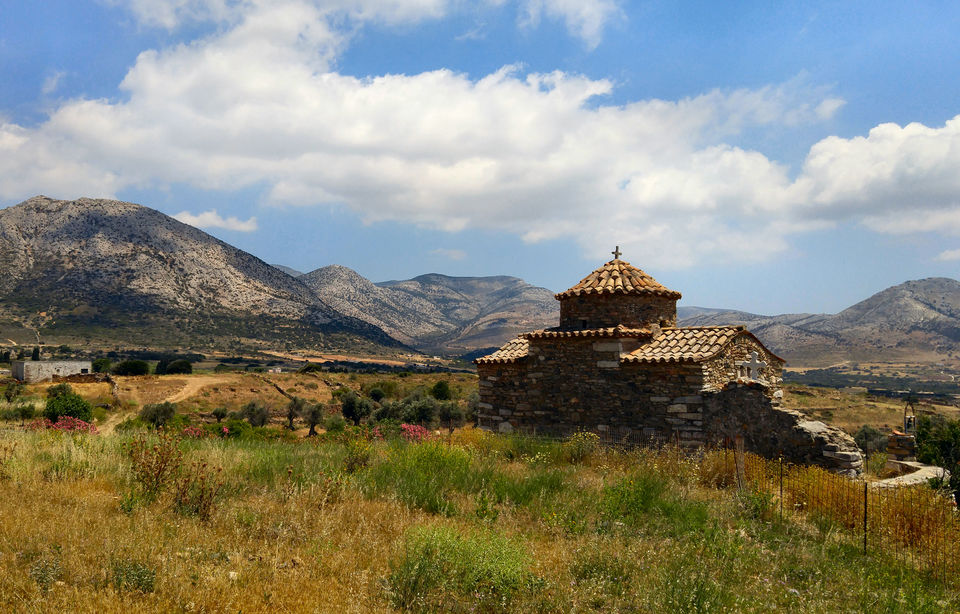 Did you know that in ancient Greece, Olive used to be the oil for anointing kings, that it burnt in the sacred temple lamps and was the eternal flame in the original Olympic Games. With origins of the first olive tree in Greece being dated 2000 years ago, oil production was a major industry for several centuries in the Mediterranean until the industrial revolution in late 18th century. Naxos still has 90 olive press buildings (non-operational) and an 18th century museum in the quaint village of Eggares. “Atleast a dozen men were required to move the millstone,” said Mary, the curator of the museum, pointing towards a huge trapezium shaped cylindrical boulder with two protruded wooden arms on either side. The museum has life size exhibits of all the tools that were used in a typical Olive press. It also sells various types of breads, cakes, jams, pastes, soaps and shampoos – all made from olive oil! 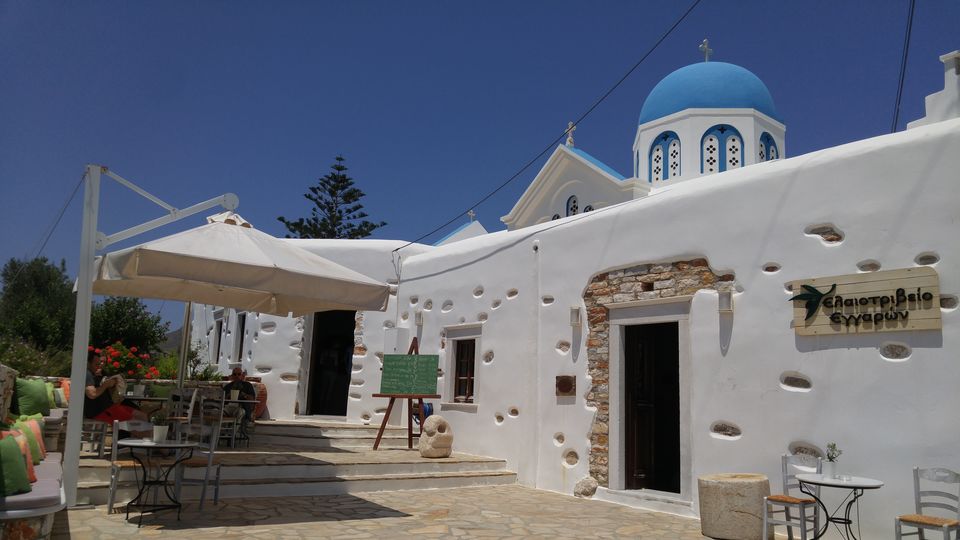 Replica of old equipment used in the Olive Press 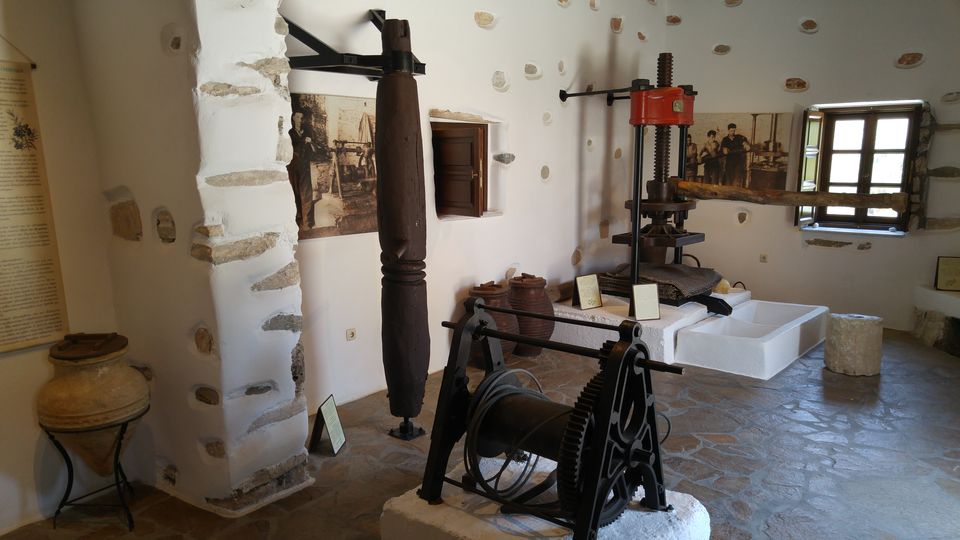 Though there are numerous beaches in Naxos Island, few deserve a special mention.

Proximity to the town center is what makes it very popular. It is just a few blocks away from the port. Plenty of umbrellas and sunbeds are available for rent. A small hillock on the eastern end of the beach provides panoramic view of the Naxos sea front. 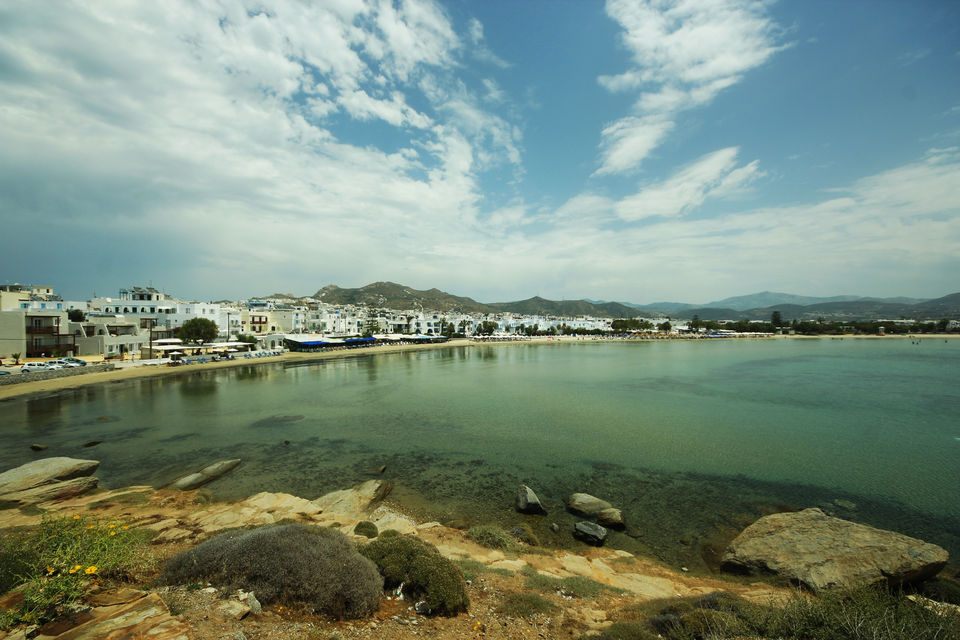 It is the most gorgeous beach of Naxos Island. A 4km stretch of fine sand makes it the most popular spot for tourists and locals. Due to its distance from the city center (12 km), its usually deserted during the off season. An erstwhile favourite of nudists, it is now attracting couples and families as well. Lined with beach front cafes and bars, Plaka is a must visit when you are in Naxos. 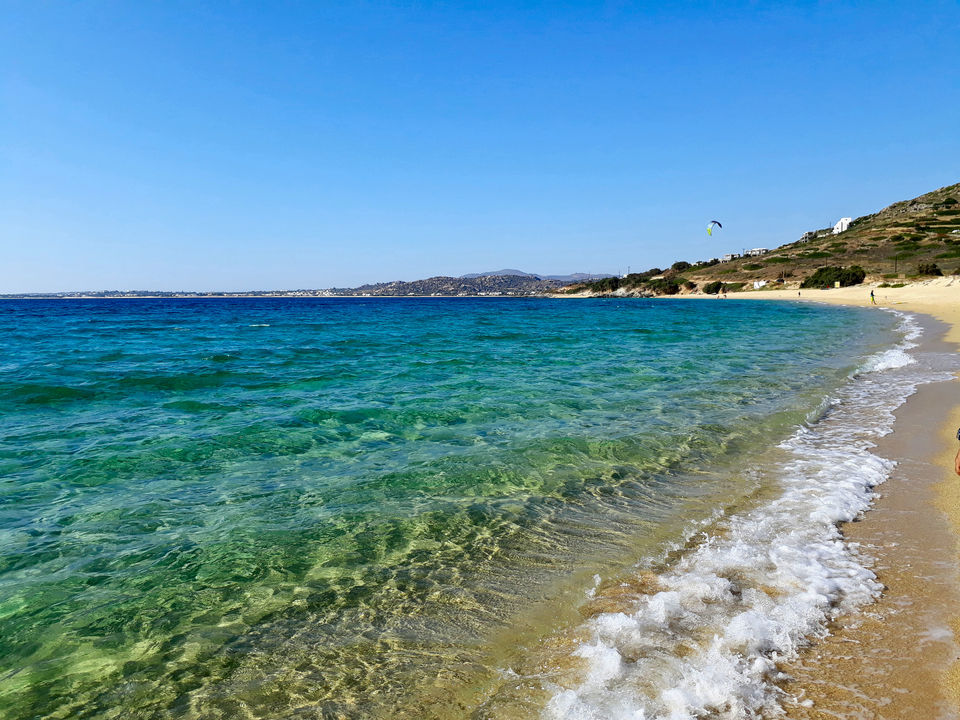 The best way to explore the huge island is to rent a two wheeler. Be sure to check in three to four shops before deciding on the vehicle. The differences in prices vary in the range of 5-10 Euros. You can also opt for a car for larger groups.

There are daily flights from Delhi to Athens via one stopover. Naxos is a 5 hours journey by ferry from the Rafina port. Ferries run multiple times a day between Athens – Naxos – Paros - Santorini. Athens, the capital of Greece has several international connections.