Live Amidst The Apple Orchards for a Day

Roughly 150 Kms and a 5 hour drive away from Simla exists a place still not much explored and divinely beautiful. This gem of a place is so hidden from the eyes of the world that even Google maps fails in finding a path to it. The place I'm talking about is called Baga Sarahan and is not to be confused with the Sarahan in Simla district which is quite popular mainly for it's picturesque Maha BimaKali temple. Baga Sarahan, on the other hand, is roughly 85 Kms away from this Sarahan and comes in Kullu District and one needs to follow Nirmand Road after crossing over Rampur Busahr.

We were following an itinerary from one of our tour operators who suggested Baga Sarahan instead of spending a night at Sarahan. Basically, our plan was to visit Kinnaur and wanted our last day stay slightly closer to Simla in order to catch the HPTDC night Volvo on time. The plan worked perfectly well for us as that day it took more than 6 hours from Baga Sarahan to reach Simla because of heavy influx of tourists because of peak season.

But despite being the peak season, Baga Sarahan literally seemed untouched. After crossing the Nirmand bridge over Sutlej, we hardly encountered many vehicles to or fro on this route to Baga Sarahan. Also, the route was extremely scenic right from the beginning traversing hills with huge pine trees on both ends and offering views of lush green Meadows and grassland and Sutlej River flowing across the gorge below. The landscape changed drastically after
Bagipul with views of green valley laden with apple and apricot orchards now taking over. Finally, with about 10 odd kms left according to Google maps we took a left on a road which was still getting constructed and which even Google maps failed to recognize. The last 4 kms of this stretch was absolutely unpaved and luckily we had a vehicle with high ground clearance that we were finally able to reach Baga Sarahan.

What met our eyes upon reaching Baga Sarahan was sheer beautiful . A land carved out of paradise and placed in the middle of nowhere. It would have been difficult to find our camp as there was no demarcated path leading to it and all mobile network were gone as soon as we had reached the place. Luckily for us , someone from the camp was waiting for us and guided us till the camp.

There are only a couple or properties at the moment at Baga Sarahan. One being Parasol camps where we were supposed to stay and the one next to it which was more cottages kind of structure and currently being marketed by Parasol as well. There was some confusion initially and instead of the Swiss tents , they accommodated us in the cottage but soon the matter got solved and we were given our rightful tent.

The Swiss tents at Parasol Camps were very basic but extremely comfortable and cosy. There was an attached washroom which was very clean and had all the facilities in it except for hot running water for which one needed to request. Apart from that there was electricity throughout our stay and they had even provided for a solar lamp in case of emergency . There were in total 6 tents spread across a line and all facing the Apple Orchard from their entrance . We were served some evening tea and snacks upon arrival as evening approached , they arranged a small bonfire outside. We were served some vegetable soup there after and the dinner which followed even though not lavish and simple and delicious .

In a place like this , there was not much to do in the evening but to just soak in the beauty of the place with the lush green Meadows outside our camp surrounded by the high mountains and thick forests on all aide, the Apple orchards within the camp and the night sky above twinkling with a 1000 stars above . We felt the urge of going for a stroll to the Meadows under the moonlit sky but were dissuaded in order to avoid encountering any wild animal. After a good dinner, we went to sleep by around midnight only to be woken up because of the drastically falling temperature.

Surrounded by the mountains , the sun does not rise as early here as in other places nearby. Even around 7 30 am, the sun was not visible to us, even though it was quite bright. We were to hike to a nearby waterfall at 8 am. We were out of our beds by 7 am and after having some morning tea, we strolled around the nearby Meadows. The entire group was ready by 8 am and we all went to the waterfall. It was a small hike from our camp and should not take more than half an hour . The trail was well marked and led us through the forest crossing a couple of fresh streams. Finally we were delighted to reach the water fall site and played for a while with the freezing water before starting our descend. There after our owner and guide, Mr Negi took us back through a new route slightly trickier than the one we had earlier taken . It seemed that we reached a hidden part of the forest and there was this Huge gigantic tree with a hollow trunk and he made us go through the trunk and climb the tree. I wondered how nature itself creates such activities in places like these and man ensures to utilize them to the most. We walked back to our camp after spending some time climbing around the tree. We reached our camp from the other end this time and had managed to take half a loop. This path had a different beauty as it was laden with purple coloured flowers throughout along with patches of white wild daisies in the middle of so much greenery .

We finally reached our camp and it was time for us to pack up. Breakfast was waiting for us in the camp and just like dinner it was simple and minimal yet very tasty and filling . We followed our breakfast with a cup of tea admidst the Apple trees and it was time to bid farewell to the beautiful place which helped in creating such wonderful memories in our mind which shall remain etched for a life time.

District : Kullu ( Not to confuse with Simla Sarahan)

Where to Stay : Parasol Camps

Distance from Simla : Around 200 Kms 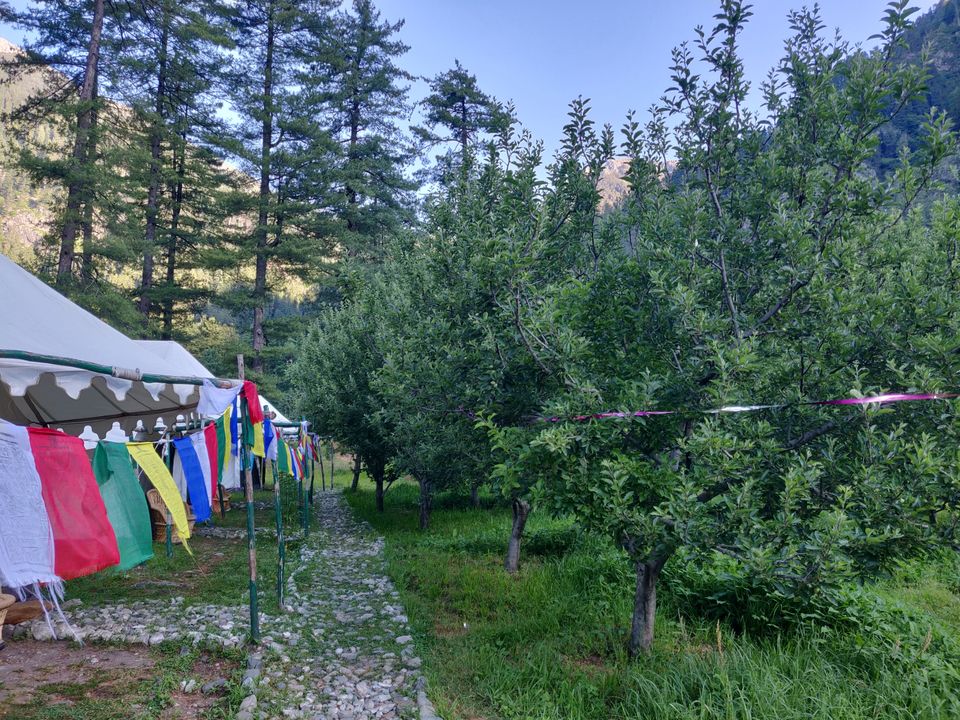 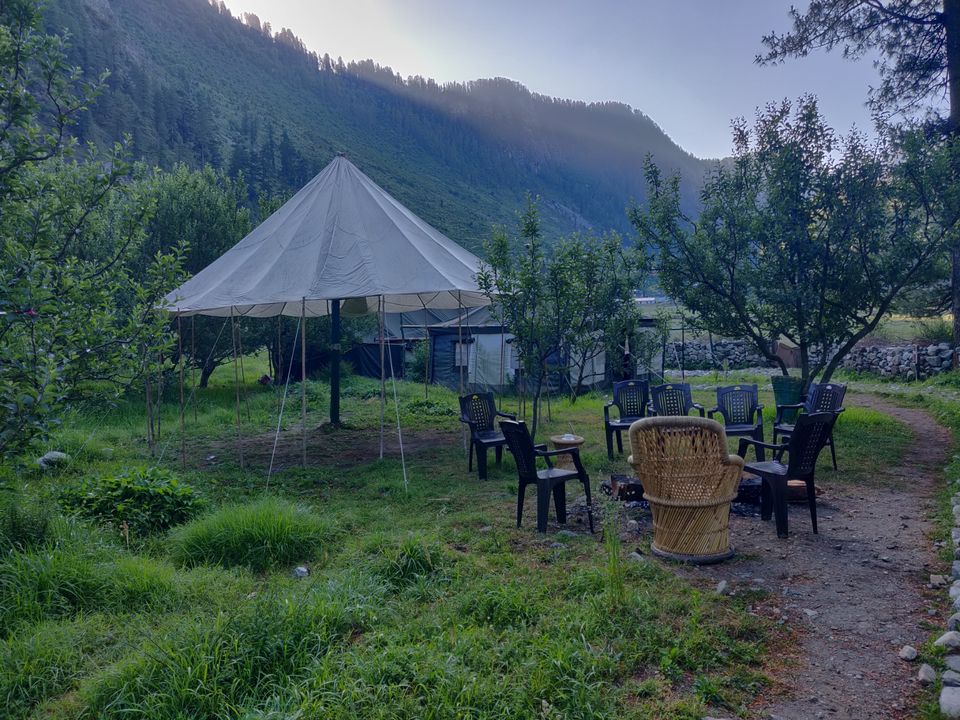 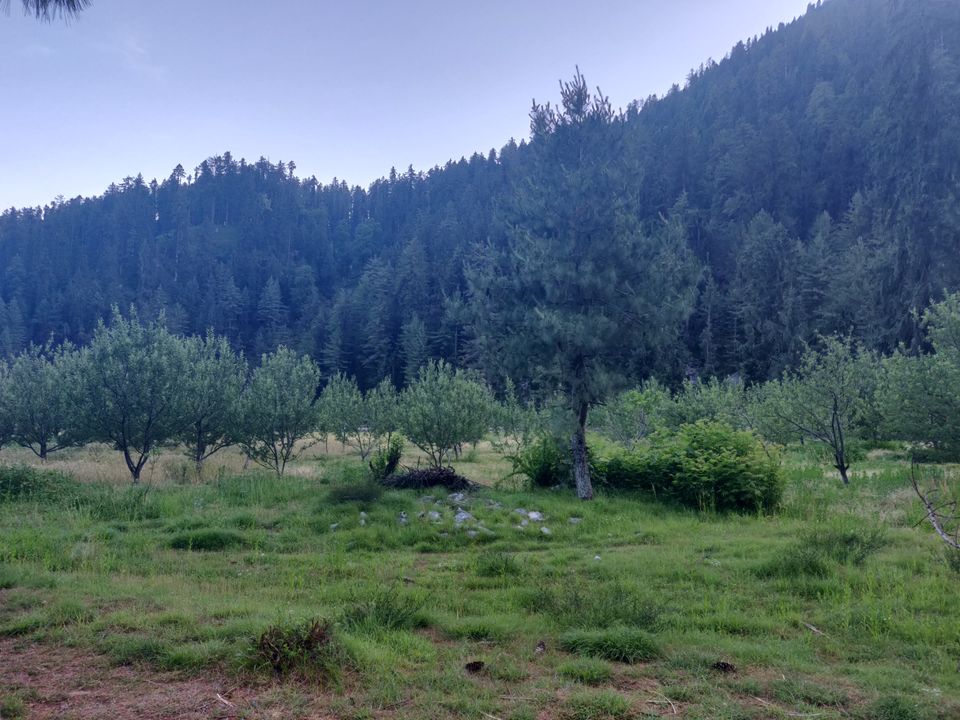 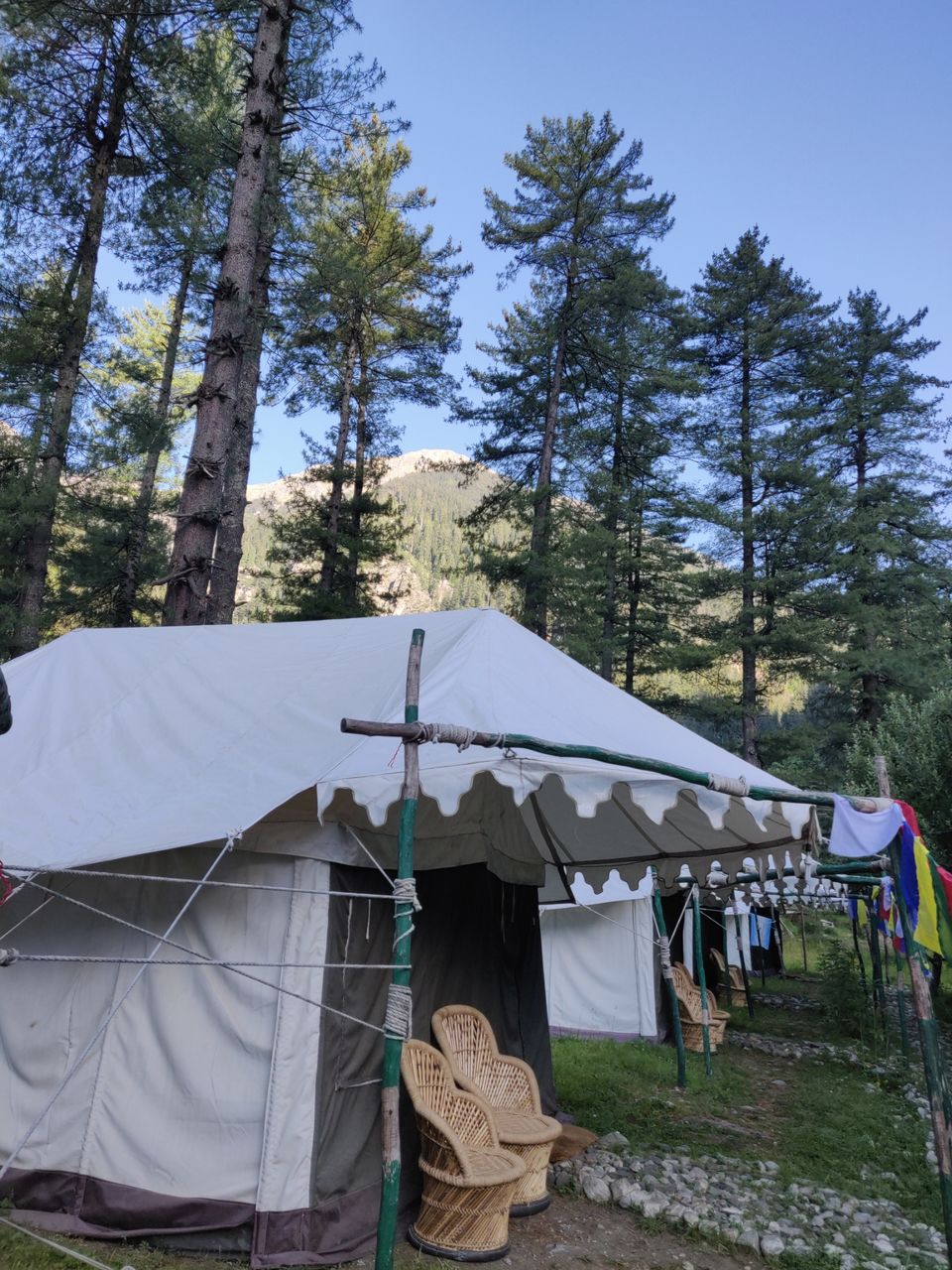 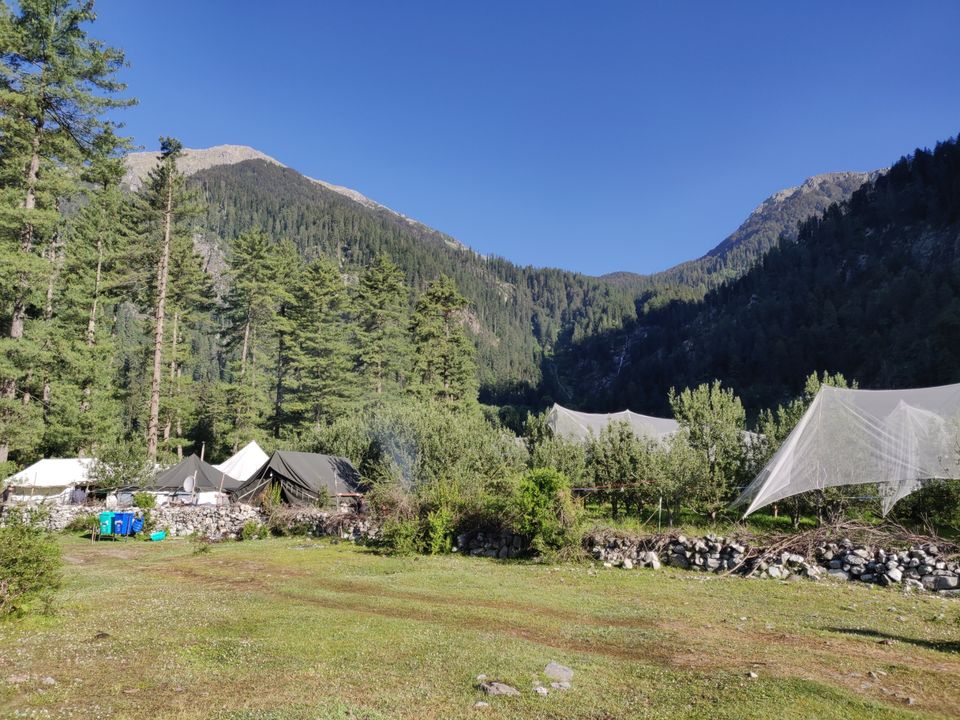 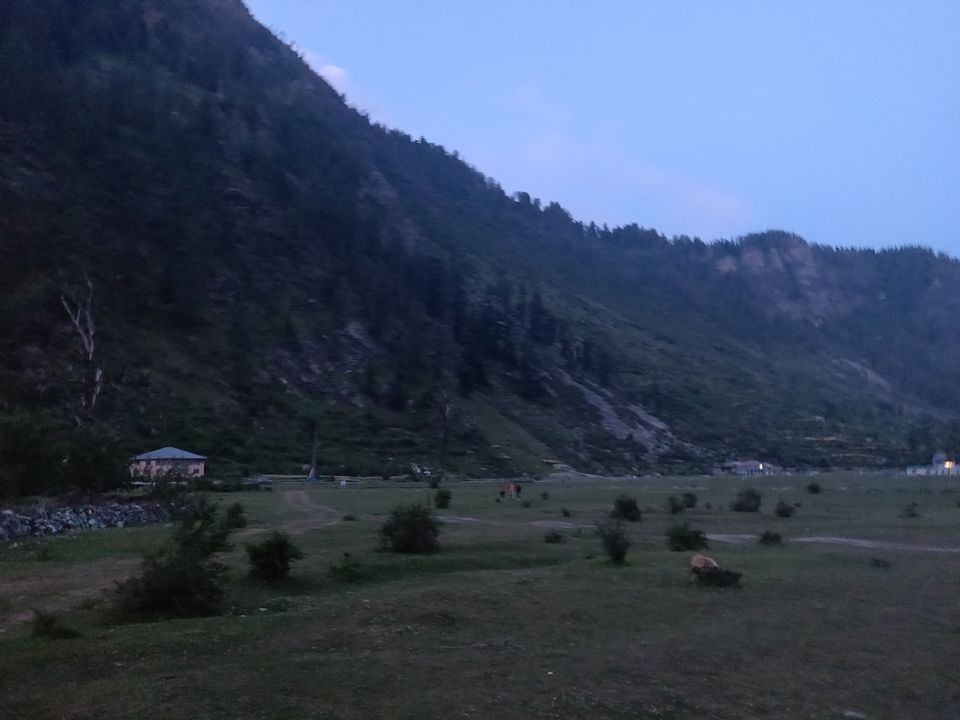 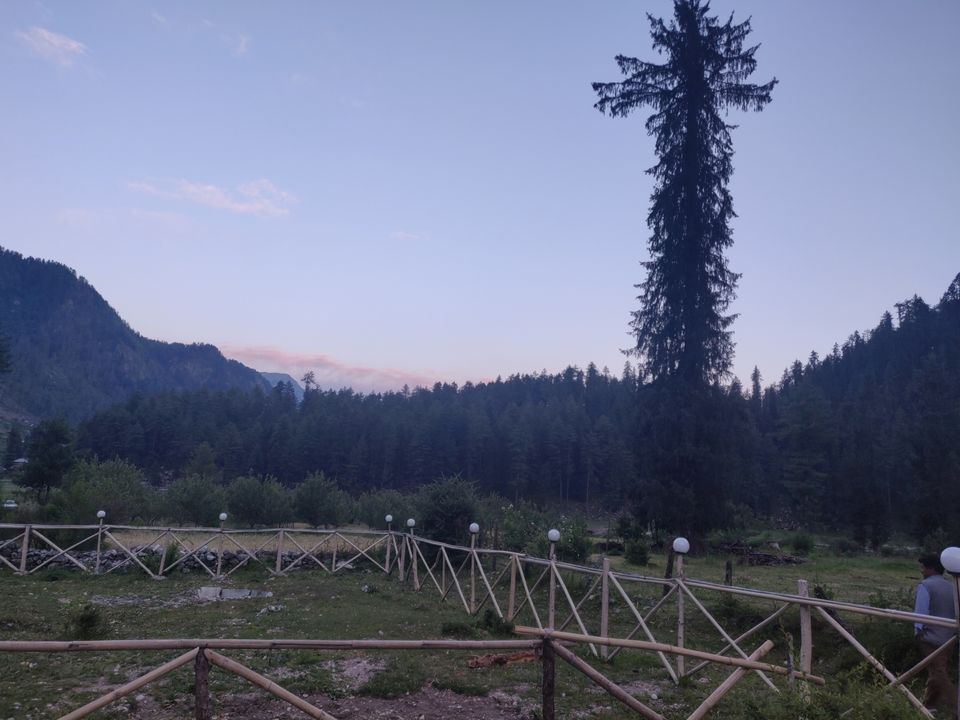