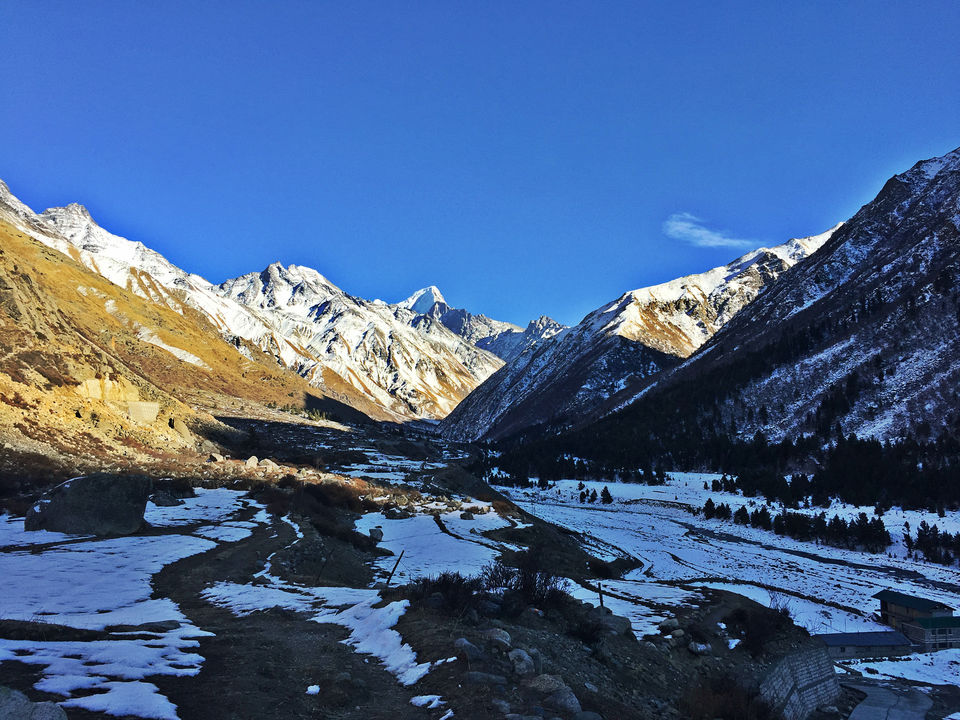 The year end break was coming up and all my friends and colleagues were making plans to either go to some chaotic and crowded party or host one of these. Having celebrated Christmas and New Year's eve in exactly the same manner for over a decade; I felt I could use a break and choose a rather unconventional manner to celebrate the holidays. I decided to explore North Eastern part of Himachal Pradesh solo. Given that it was December end and peak winters; the status of weather, road conditions and stay options were all very uncertain. Hence I made a very broad itinerary and just decided the locations I wished to cover, with an obvious Plan B for the case of bad weather (in hindsight, I am so glad I didn't need to use the Plan B).

I started my journey from Delhi to Shimla and headed right away to Chindi, a small town just above Karsog valley. It snowed in Chindi the very morning I reached; I could not have asked for a better way of commencing the trip. Chindi offers breathtaking views of the mountains covered with thick forests. Chindi is still an off-beat peaceful town and is not flocked with the large crowds that the commercial towns in Himachal witness. Inspite of not being a popular tourist hub, Chindi is well connected with good roads, basic infrastructure, an HPTDC guest house and a few small hotels. There a few trails around Chindi where one can go for small treks. I trekked for a day in Chindi and headed to Karsog the next day. About 13 km downhill is the Karsog town which offers a basic market place with banks, ATMs, local shopping options, a liquor store, pharmacy and supermarkets. Karsog valley also offers some great excursion spots. After exploring the Karsog valley and given the delayed onset of winters the roads were clear and I decided to head further east towards Sarahan. The route to Sarahan from Chindi is via Rampur which is the administrative and transport hub of the region and a major transit point. Further east on the NH-22 or the erstwhile Hindustan-Tibet highway is Jeori from which an uphill route leads to Sarahan. But before you head forth, do stop in Jeori for some authentic Tibetan food.

Sarahan is commercially popular for the Bhimkali temple, however the crowd in the hamlet is limited to the Durga Puja season. The Bhimkali temple displays an unusual architecture and is a blend of the Hindu and Buddhist style and form. It is fairly quieter during the winters and most of the hotels including HPTDC would give you discount owing to non-peak season. This is the best time to visit the place since you can actually spend some time, enjoy the serenity and the eternal panoramic view of the snow capped north-western Himalayas. It is one of those places where you could spend the entire day exploring the region or merely sitting in your hotel balcony and enjoying a good book in the majestic backdrop of the Himalayas. Hotel Shrikhand of the HPTDC offers the best views to the landscapes in the region. Sarahan is the gateway to Kinnaur region. Since it had not snowed yet and fortunately the routes were open, I decided to spend a day in Sarahan and move on further east towards Kinnaur. Being brought up in the temperate climate of Western India, I always dreamt of plucking an apple from an orchard and eating it. What better place to visit apple orchards than the apple export hub of India, yes, Kinnaur!

As they say, "It is about the journey, not the destination!" Traveling to Kinnaur from Sarahan means riding across the deadly NH-22 which has been classified as one of the deadliest roads in the world. At many places, there is no distinct road, but merely a pathway carved out from the mountains with no paved surface or any form of top surface or sub-base. Nonetheless this makes the journey adventurous and thrilling; particularly when you can see gravel, stones, sand, clay and every other possible thing sliding across on the road from the mountains in one direction; while on the other side you can see how deep the valley is. It is to be noted that such kind of journeys are not advisable to those who are prone to altitude sickness or motion sickness. Being a solo woman traveler, I always feel that is safer to live at a decent hotel and commute through public transport. Especially in a dangerous terrain, public transport is the most trustworthy choice of transportation since the public transport drivers are ardently aware about the road conditions, terrain, weather and above all, they have an extensive experience of driving in the region. Not to mention, it is safer to travel with a large group of people than just a cabbie. Nonetheless, entire Himachal is extremely safe and the locals are extremely hospitable, co-operative, trustworthy and extremely helpful.

After about a 100 km long ride across the adventurous NH-22, I reached Reckong Peo which is another transit hub connecting Kinnaur, Kaza and northern Himachal to Rampur, Shimla, Delhi and the rest of the state. The stay options in Reckong Peo are minimal with poor amenities, especially during winters when even getting water in washrooms can be a mission. I chose to hike about 10 km further to reach the tiny village of Kalpa. The views in Kalpa appear right out of a postcard or a wallpaper. Kalpa offers clear views to the imposing Kinner Kailash peak, believed to be the winter abode of Lord Shiva. Kalpa is a way better place to stay than Reckong Peo. Kalpa offers a wide range of accommodation options varying from hotels to guesthouses to home-stays. It is worth relinquishing your cozy bed and waking up before sunrise because the views at that hour are to die for. When the crimson light of the rising sun falls on the snow laden peaks, the entire mountain range enlightens with a golden glow. I explored the tiny village which constituted a monastery, apple orchards, extremely friendly villagers who offered the renowned Kinnaur apples; which made the entire journey across NH-22 worthwhile. I spent the afternoon on the roof of my hotel admiring the spectacular vistas of the Kinnaur Kailash range. The Himalayas are so wild and starkly dominating, you cannot stop praising and saluting them.

To move forth, one needs to come back to Reckong Peo and then choose an onward destination and transit mode. The winters were delayed at an unbelievable rate and I was tempted to move to Kaza and explore the Spiti Valley. But in light of the weather forecasts and realising that most of the stay options in Kaza and beyond had closed down for winter I decided to move south-east and explore Sangla.

Sangla valley is a valley along the river Baspa, hence often it is also known as the Baspa Valley. The valley offers 360 degree views of the snow covered Himalayan ranges. It is one of those places to come down to contemplate, enjoy the nature and landscapes, have some peaceful time, take long walks along the Baspa river and do some treks. Glacier trekking also happens here, although that is after winters, so it was not feasible at the time I visited. The trek options are incredibly pristine and unexplored here; so as long as you have the necessary camping gear and sleeping bags overnight trek is a must from Sangla. I met a bunch of fellow travelers on the Reckong Peo - Sangla route and we trekked towards Sangla Meadows and camped overnight. The next morning we came back to Sangla and explored scrumptious Tibetan food. Sangla valley is incredibly stunning with the eternal Baspa river flowing by, meadows and pine trees on one side and snow covered peaks on the other. In summers, one can camp riverside and just live in the splendid scenery, forever.

I decided to move on towards Rakcham and arrive at the last inhabited village in India - Chitkul. I took a cab from Sangla; there are public transport options but the frequency is very poor and in winters the buses run just once every morning and evening. The views along the the Sangla-Chitkul route are astounding and phenomenal. By the time I reached Chitkul, Baspa river was completely frozen. The town was practically shut given the weather conditions. The temperature went down to minus 20 degrees in the December nights and most of the hotels had closed down. I took a stroll around the village to learn there were hardly 100 houses in the village. This is the last point on the Indo-Tibet route which one can visit without any permits. The entire town including the river, the mountains, the streets were laden with snow. It was evening and the setting sun rendered first a crimson then a royal golden hue to the snow capped peaks and the entire range lit up as if someone had spread across a string of golden Christmas lights across the peaks. I managed to find an accommodation and spent the night in the frozen yet marvelous and impressive village of Chitkul.

I got back to Delhi after a couple of days but the majestic Himalayas still are completely fresh in my memories...One of the longest solo trips I had taken up given the harsh weather conditions and the terrain; but it was so rewarding; I came home with some priceless memories and spectacular views which are going to be with me forever!!!