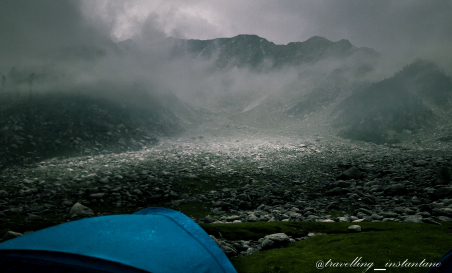 Trekking is something that we can think of when we get a thought of being away from daily routine works. We make many plans for outing but the success rate of those plans is so low. During this while, a plan of trek was initiated and luckily it was not like others that got cancelled.

We planned a trek to Kareri Lake, which is a high altitude, shallow, fresh water lake at an altitude of 2950 m located in Dharamshala in Kangra district, Himachal Pradesh. I went to that trek with three friends of mine and we left for Pathankot from Delhi railway station and from there took a bus to Dharamshala. The bus station is just 300m away from the railway station. We were very excited for the trip. We reached Dharamshala by 2 in the noon checked in at our hotel and after some time planned to go to Tea Garden. We started walking to the Tea Garden, getting the way from the localites. We walked a lot not never felt that we were close to our destination. In the mean time, I got a call from one of my cousin, he said, " You are wasting your stay in Dharamshala if not planning to go to Mcleodganj ", since we had no plans to go there. After that call we made an instant plan to go and took a cab and went to several places which includes:

Naddi Point, Mcleodganj Dal Lake and some other places from outside only because we were late.

After all that fun, went back to our hotel as we had to left early in the morning for the trek. We had to meet our Guide at Dharamshala Bus Station. So, that morning was there and the level of excitement was at peak.

We left the hotel and walked to Bus station. I saw two old man standing there and waiting for the guide just like us. I got to know that they were our other group members and other members of the group were much elder than us. Thus, we had people of different age groups, starting from 20 year old to 65-year-old fellow trekkers. As everybody will think of, our reaction by seeing such mature people with you, we were also in a thought that our fun is almost vanished.

Being in such thoughts of abandoned fun, took taxis and reached our base camp in Kareri Village and left for the trek after breakfast. So the time to start the trek was there, we all started together carrying rucksack. It felt quite tough as the time passed by. We had to cover about 9 km of distance that day. The pathway was risky and uncomfortable but nothing as compared to the excitement level.

At about 14:30 hours, reached a place near a waterfall where we halted for Lunch. The place was so tempting, the melodious sound of the flowing chilled water. Finally, all the group members were interacting so well and had fun that those thoughts were forced to go out of our minds that we won't be able to enjoy with such group. After lunch and capturing the beauty of that place, everyone was ready to reach the destined place of that day.

By the time, we were near our destination of the day, Rioti, we were all exhausted, but by seeing the view we got to see the place where our tents were. Everybody was so refreshed by the view. Tents were just few meters away from the flowing water. After some rest, bonfire was on and too our dance, that moment was like the best of the day along with melodious sound of water.

Getting up early in the morning is my cup of tea but that day I woke up at about 5:30 to enjoy the pleasing weather of the place. Sat for a while resting my foots in the flowing chilled water which was so relaxing and felt wonderful. Gossips with fellow trekkers were on and got a challenge to bath with that chilled water as many of us were not planning for it. But then the time came, we gathered all our power and took bath in such cold weather with water which just felt as cold as ice. It was time for the breakfast now, and had to left that place to move further towards Kareri Lake.

I remember, weather that day was Rainy and it rained several times during our journey. At a point of time, when it was raining, the Old man took a place and sat under a huge rock with his rain coat on, I reviewed a scene of THE REVENANT, as uncle was looking same as Leonardo. After 3.5 hours, covering journey of 5 km, we reached the destination, KARERI LAKE. I felt so amazed by the view, everyone was enjoying the view there. I think I must share that moment with you.

We made it, to reach at an altitude of 2950m and a glacier was visible from that place which was so appealing that we planned to go there too. We sat there, enjoyed the view and played some games with the determination of reaching that height of glacier. After some snacks, we six people out of ten packed ourselves up and started a new journey. Weather was changing so rapidly, that we were in clouds at an instant and everything is clear in the other. The path was difficult to cover, as it got slippery due to rain was so steep as well. But finally we reached there and the feel of satisfaction and joy at that point of time can not be described in words.

The glacier was Mankiani Glacier, at an altitude of 3207 m. After those cherish moments we left for our camping area at Kareri Lake, had dinner and played games in our tents with the sweet voice of rain. Nobody was in a mood to sleep as those moments were so valuable. But we had to return back too, Haha!. So went to sleep and the wonderful day came to end.

So, the last morning of the trek was here, cloudy weather with blowing wind. We all started capturing our memories and the most important thing, the Group photo from which you will get to see how fun can be the best if the group has people of diverse age groups.

Past two days were so awesome that nobody wanted to leave. But that is how life goes, everybody has to get back to work. We left Kareri Lake and targeted our next halt at Rioti, our first day destination. Once we were again charged up, it rained and the view was so ravishing. I was amazed and got many shots.

Then after it was a bit clear, we left and reached to Kareri Village where cabs were waiting for us to drop us at Dharamshala. This trek was something worth living. I was glad that we got to go with such group members as we got motherly care and lots of knowledge in the path from them. It was just an awesome experience.

At last I would like to thanks Trek Trails for their part in the trek. I am sure that I will miss and remember those three days and the feeling of being in the lap of nature was the BEST.