Kargil To Leh: Wonders Of The Shaam Valley

The excitement was real, we were off to Leh, the most famous place in Ladakh. Having done my homework, I was well aware off the excellent roads we would travel on (apart from the small patch near Mulbekh), unlike most others in the Himalayas. This made me feel that, that tad bit of adventure was cut down, but that was to be a welcome respite from the terrible roads that we had, and would encounter. We were to take the more common route through Lamayuru, since we did not have the permits for the Batalik route, which can be procured in Leh, and maybe Kargil!

Our list included a whole lot of things to see, two passes, a few monasteries, a gurudwara and much more. Early breakfast meant that we were on the roads by 7 AM. Initially the roads were a little rough, up until Mulbekh after which no one could have any complaints. 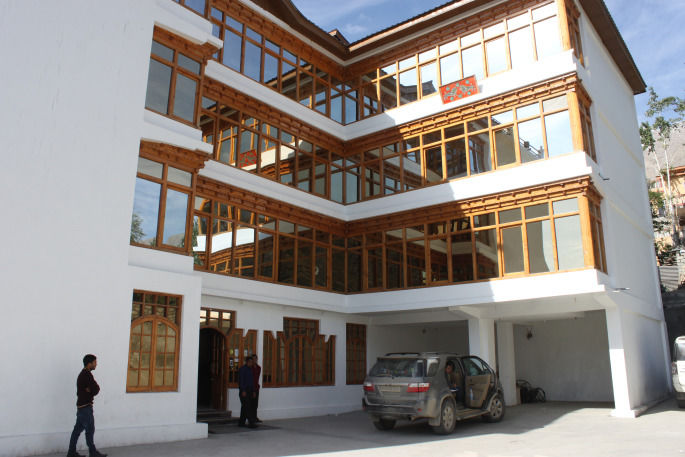 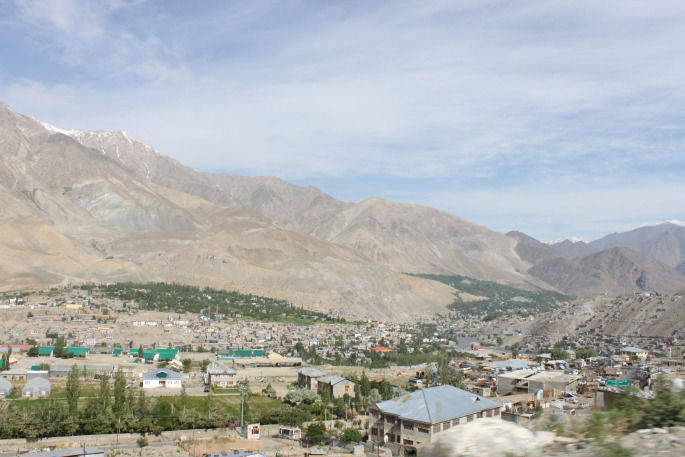 Kargil is also the gateway to Zanskar, which I plan on doing in the near future, but this journey leads us to the town of Leh.

The Mulbekh monastery was not one we could visit, after a local women told us that the monk was away. Even though I knew that the monastery had a spectacular stone carved Buddha, I consoled myself reasoning that it was a tough climb and we still had a lot to do on the day. 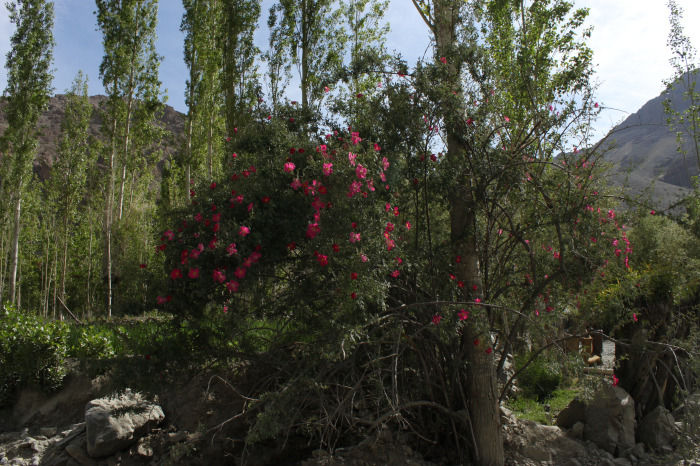 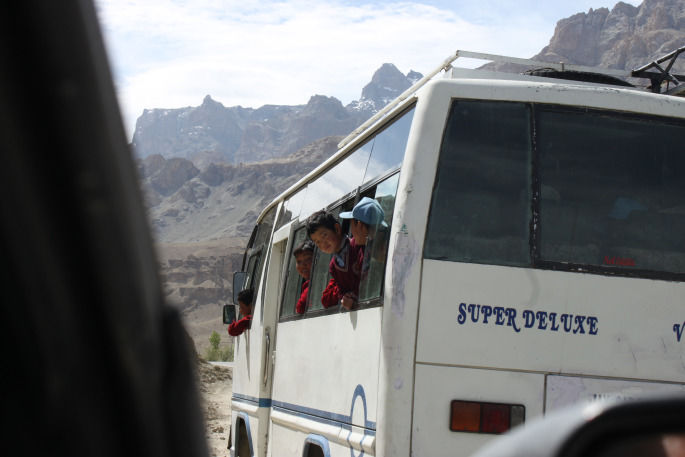 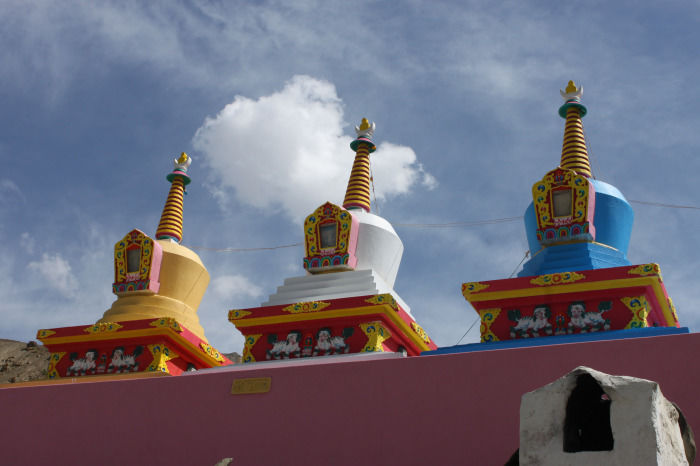 As we left Mulbekh towards Namika La, we met a few sun-burnt rosy cheek school children off to the Wakha Public School! They were just so happy in spite of all the difficulties that this terrain brings along with the tranquil and heavenly landscapes- the reason people visit Ladakh ( Not to forget adventure); that it made me smile!

The first mountain pass that we were to encounter today was the Namika La. It is the lower one of the two passes that one has to cross on the Srinagar-Leh route. Unlike the tough and challenging (in more than one sense-maybe more of this on another day) Zoji La, Namik La and Fotu La are much more 'easy does it'. Good roads, fewer vehicles, great views make them less of the adventurous type, but the feeling of accomplishment on traversing these is not compromised. 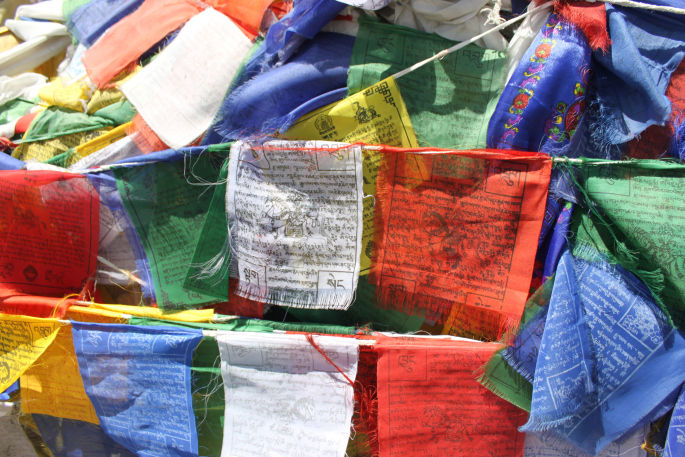 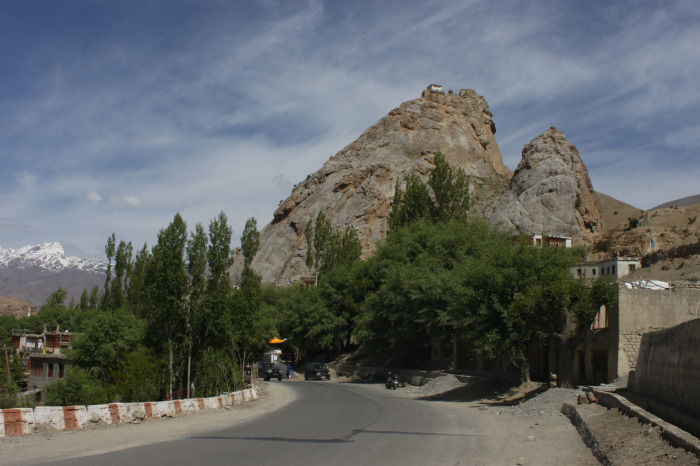 The Fotu La top has a built view point which offered a welcome break for some biscuits. The panoramic views of the barren lands did not disappoint, while the winding downward roads ensured that the Beatles played! 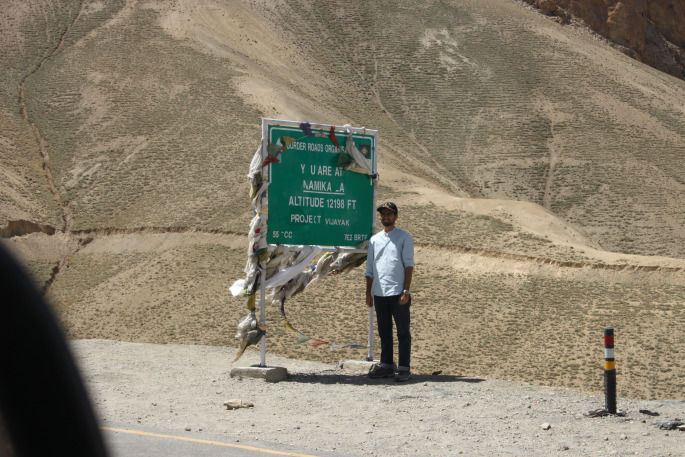 What I like about monasteries are their settings, most sit atop hills with great 360 degree views while the villages are built below. This allowed in the ancient times, for them to function as strongholds. Now, much of this is not needed; but means that visiting monasteries is that the views will be jaw-dropping. The Lamayuru monastery is nestled in arms of a mountain and makes a sight to behold! The monastery has a place called Hotel Niranjana which served us hot noodles and fresh apple juice in green glass bottles. The monastery which like the many other that I have visited, gave me a sense of peace and calm. The scented air just seems to make one slow down and live life at one's own pace! 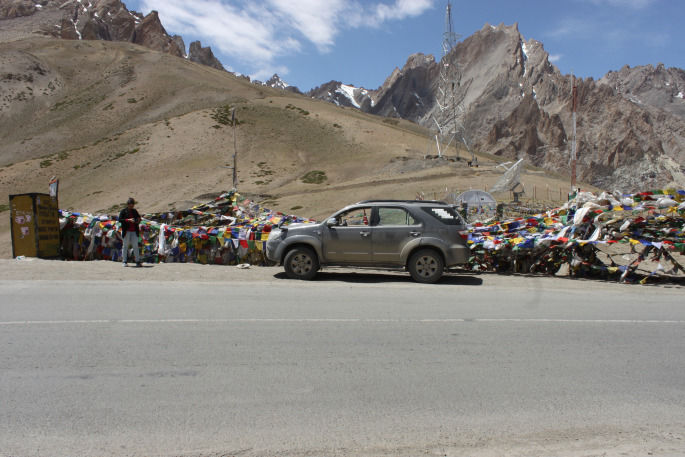 Just after one leaves Lamayuru towards Leh, the road traverses the mountains through the gorges with the Indus flowing along one side. A little way from here is where one encounters the Lunar landscapes, which for me were difficult to point out; since all the terrain here was new and unknown for me- this being my first visit to Ladakh! 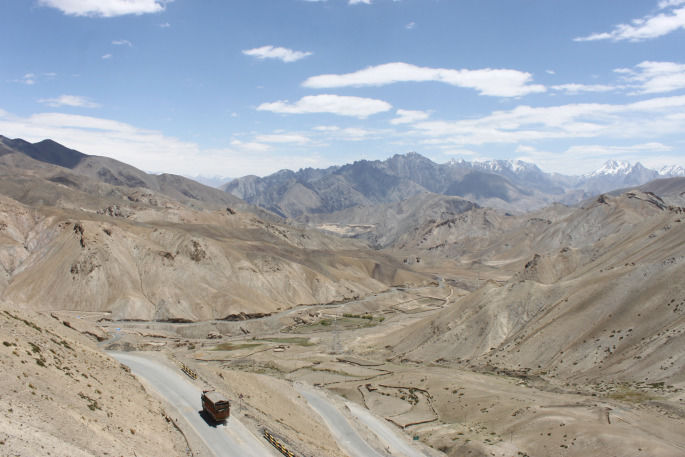 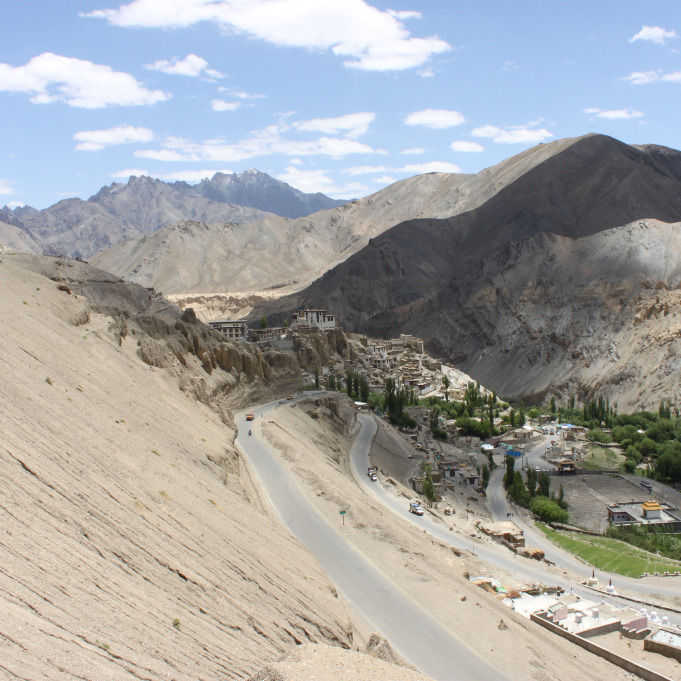 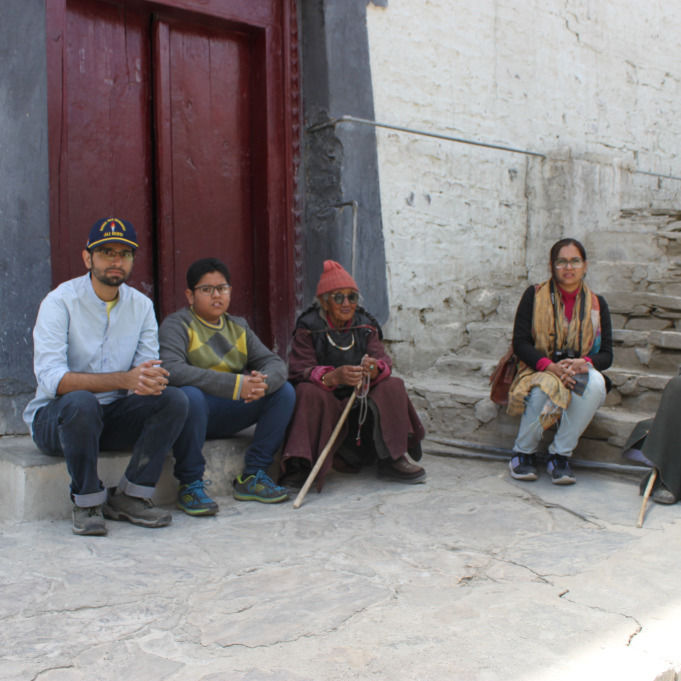 The Alchi Monastery is unique, in that it is built on level land near the Indus river. It was founded by the great translator, Rinchen Zangpo and is more of a monastic complex, called as chos-'khor. There are a few temples under the shade of trees. The place is an ideal one for a night halt at one of the many homestays. Hot chocolate at one of the places just outside prepared me for the final leg of our journey to Leh. The sellers of souvenirs are plenty on the thin lane to the complex and you could do better than not buy a few. 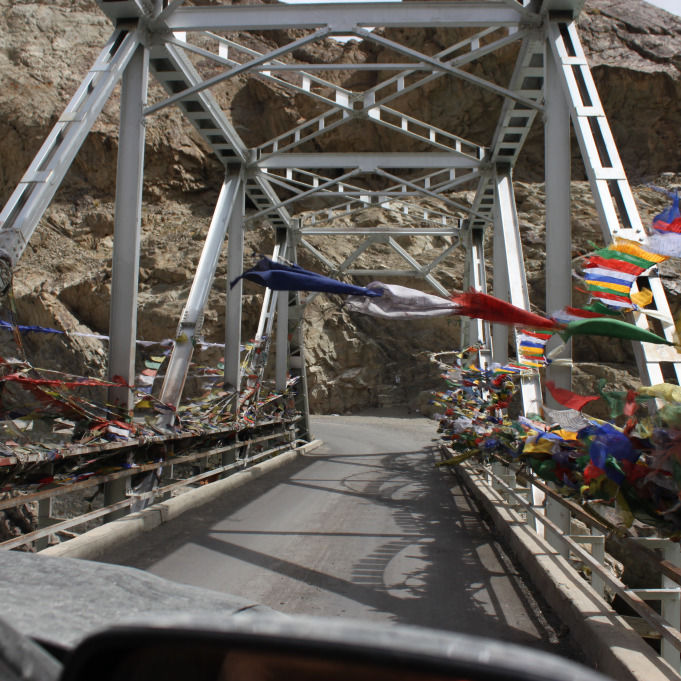 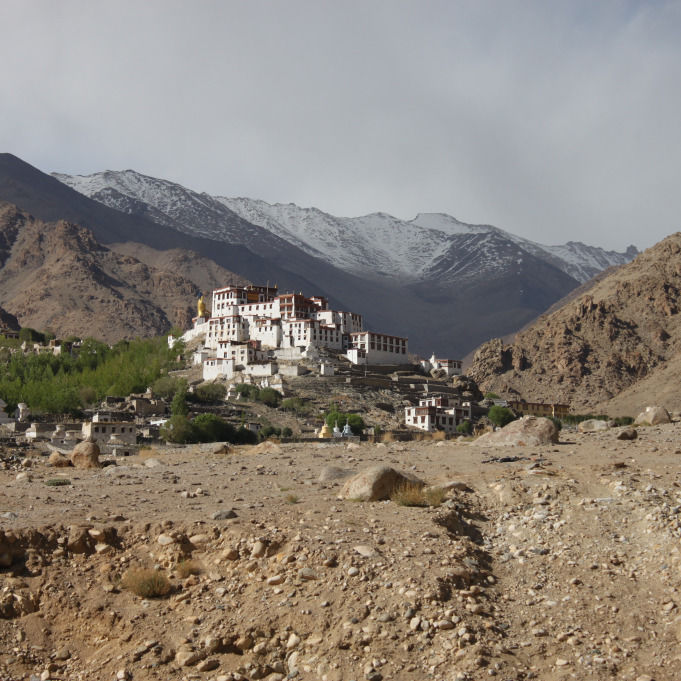 Just after dropping of a nurse on her way to Leh from Alchi at Likir, we went to pay a visit to the Likir monastery. Taking lifts as a mode of transport is very common in and around Leh, very safe too. The place just does not seem capable of anything bad! As we headed towards the monastery, we were the only ones there at the monastery while all the monks played cricket at the school nearby! The Likir monastery is big and houses a great statue of the Buddha. The views are totally worth the small detour that one needs to take to reach here.

After having a day full of visiting monasteries, we were off to a Gurudwara. We did though come across the Basgo Castle just before Nimmu. Nimmu is known for the confluence of the Indus and Zanskar, two major rivers that drain the dry arid lands of Ladakh and Zanskar. 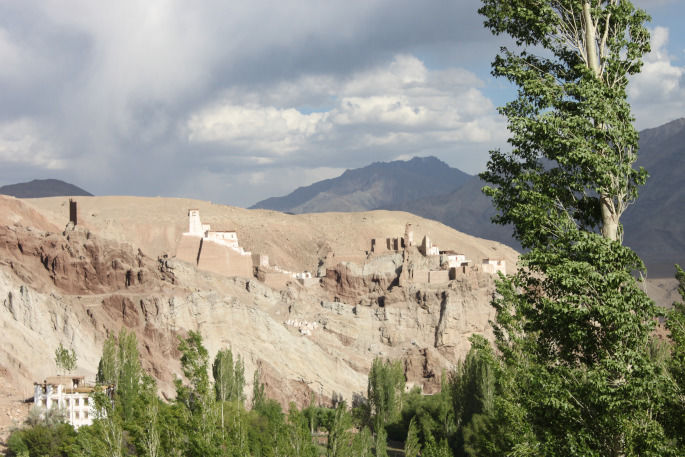 Both these rivers have distinct colours, and the steep climb to the viewing point, though exhausting; is a rewarding one. The road below goes to Leh, the other road visible goes downhill to the village of Chilling which lies in the Hemis National Park and is a popular start point for trekking.

The well known magnetic hill is an optical illusion for those still not aware of the fact, but one still cannot resist to try out checking whether your vehicle moves uphill (which is actually downhill). This is mostly due to the absence of a horizon! The roads here are straight as an arrow and well maintained. We though tried a bit of off-roading here, which is always fun.

We visited the Gurudwara Pathar Sahib just before entering Leh, which has a legend associated to it. A monster attempted to harm Guru Nanak by hurling a huge rock at him. The rock turned to wax on striking Guru Nanak and the rock had molded to accomodate the shape of his body. Seeing this, the monster turned into his disciple. The sewa at the gurudwara is handled by the Indian army and we had good 'chai' and biscuits before heading off for our stay in Leh! It had been a fun filled, long day and greater adventures lay in front of us. This, after all, was just the beginning!

This post was originally published on Arnav Deshpande's Blog.