Manali-Kinnaur-Spiti Circuit for the Wanderlust on a Bike

So, here it goes, a trip that I did with my partner in July,2016. This one was to celebrate the step we had both taken to quit our corporate jobs and work on something we personally love. After landing in Delhi, we boarded the bus to Manali where we were to pick-up our rented bike. Our initial plan was to transport our bike to Delhi and start the journey, but then we had change of plans. Since, it was just two of us on one bike, we went ahead with a bike rental shop called " Bike Rentals Manali ", which had good reviews for its service. The charges were a bit on the higher side of Rs 1800/day but we didn't want to take a risk. We collected our bike in the evening and started our journey the next day early morning. Our initial plan was to do Spiti via Rohtang Pass but a casual talk with the rental guys made us change it to Manali-Kinnaur-Spiti circuit.

We took the Manali-Kullu road to head for our first pit-stop at Jibhi- a scenic place much unexplored and as we got to know later on, The Great National Himalayan Park was not too far away form the quiet little hamlet.

2nd day was spent on a long drive through Jallori pass, a slightly tough ride but very scenic. We stopped for the night at Sarahan, you get cheaper rooms when you stay at places slightly away from the temple. And for people who would like to stay next to the temple, they have rooms available at the temple guest house and as we heard from fellow travellers, its quite an experience. Just found out they have a trip advisor page too.

3rd day was a superb ride through the winding roads of Kinnaur as we headed for Chitkul. I had faint memories of Chitkul being the tiny,green village quietly tucked away within the mountains from my earlier trip in 2012. And excitedly we rode through the route which has been cited as on the most dangerous roads in the world. As we rode, the charm of Sangla valley left a deep sense of belonging with the nature and we stopped for a few hours clicking few snaps and just kept on getting mesmerized. Finally, late in the evening we reached Chitkul but what stood before us was totally heart-breaking. Concrete resorts have filled up the village and the place didn't feel as warm and welcoming as in my earlier trip. Though we had plans for a longer stay, we wrapped it up in a night which was spent in the PWD guest house.

4th day, we were divided on whether to stay at kalpa or make our way to Nako (which seemed too tough to try). Finally, after making through the constructions all over the road to Kinnaur, we headed for Kalpa and stumped upon this homestay run by Shankar and his wife. Oh! such a pleasant couple they are, we had fresh organic produce from their farm for all throughout our stay there. The lady of the house is so humorous, I learnt the full Kinnauri song" Rekha o Rekha" from her as we were working on their farm. During evenings, we could view the Kinner Kailash blazing in the sun-rays from our room. I think we ended up spending 2 to 3 days over there.

7th day, we rode towards Nako but mid-way we planned to ride till Tabo. Well! it wasn't too great a decision as we got stucked sometime before Tabo as there was a bridge being re-constructed on one of the "Nallahs". As we waited, there was a huge storm forming up and we got slightly drenched in the rains. As we reached Tabo, it was dark and we stopped for the night at one of the inns next to the road.

8th day, we packed our luggage onto the bike to head out for Kaza, but then we met a group of tourists on bikes returing back to Tabo, who told us that there have been multiple landslides ahead caused by the rainfall of the earlier day. What can we do? We had already been to Tabo monastery, so we went in search for a breakfast place. We headed for Maitrey Guest House as we found the place brooming with guests and on further enquiry we found a room that was free, so we unpacked our luggage yet again as the rumour around was that the JCB has not yet reached the landslide areas.

9th day. As luck would have had it, the landslide areas had been cleared and after a sumptuous breakfast we headed for Kaza. The route had now and then signs of the fresh landslides , the mud was still fresh and there were many de-tours that needed to be taken. Finally we reached Kaza by afternoon. "The Himalayan Cafe" needs a special mention here as it has delicious food and warm coffee for the starved travellers. Hats off to the lady who started it.

We faced quite a bit of a cash-crunch as the ATMs were not working but somehow it got sorted out by the evening.

10th day- The Ride of Our Life. We spent the early mornings doing some photography in and around Key Monastery and the Spiti valley.

Then we started to our last lap of the journey towards Manali. After crossing the Kunzum Pass we stopped for lunch at Batal in one of the make-shift dhabas. Hats off to the guys who runs the dhabas. They are operational most of the year round, only to close down during the harshest of the winter months.

The ride after the lunch was something we both can never forget. There were literally no roads and we were driving through dried up river banks and combine that with the innumerable icy cold Nallahs that one needed to cross. But that is how memories are created and that's one of the stories we make sure not to miss when we are in a good mood to boast infront of friends :) And how can we forget Gramphu Nallah just after Chatthru. :P

But finally, we made it to Rohtang Pass and the clouds didn't make it easy on us, we were completely drenched and the hot cup of tea and maggi on the roadside eatery was a saviour. We then reached Manali, returned our bike and the smiles on our faces even after the toughest ride of the whole trip made up for the body aches we were then starting to realise. Also, the next day was my B'day and the sound sleep i got that night almost made up as the perfect gift one could have wished for after 10 days of pillion riding. 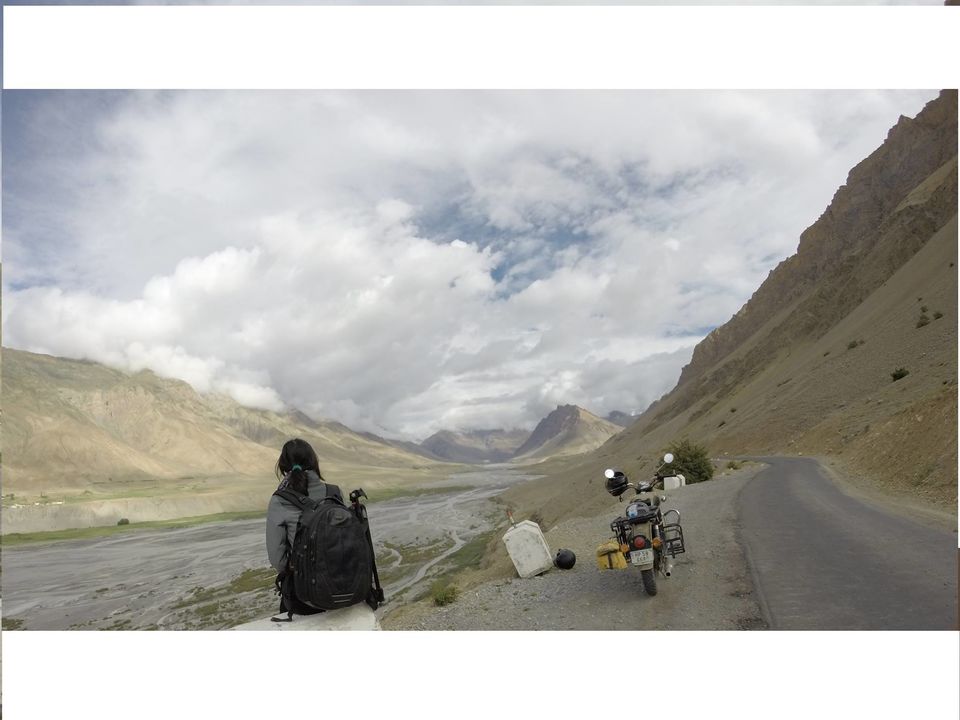