Venturing into the middle land #Spiti 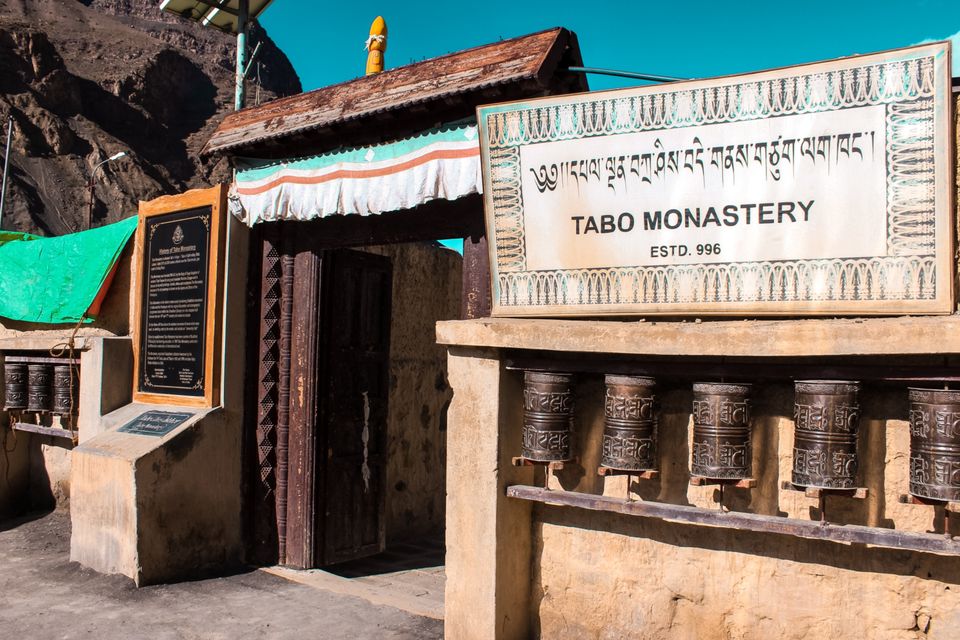 The day started with a visit to the bus stand. Why? Because we had to get the ticket for the Reckong Peo-Kaza bus. They start selling those at 6AM while the bus departs at 7. Even at 6AM; the bus stand was fairly crowded. Once we came back again, the bus was full. No place even to move. Thank god, our seats were reserved! The journey started and I couldn't be happier. Pine-nut trees alongside hairpin turns. Pure air to breath. The overwhelming mountains on all sides. Sun was trying to rise amidst all this while our bus descended down from Reckong Peo and in no time we were on our way towards Kaza on the Hindustan-Tibet highway. Everywhere along this route you will find witty signboards by the Border Roads Organisation (BRO). One of them reads, 'You are travelling on the most treacherous road in the world.' That feels like an achievement for sure. The roads were a total mess due to rains and the driver was driving with such audacity and judgement. He was taking on the hairpin turns with the finesse of an F1 driver.

There came a point when he took the bus with such speed around a corner that all I could see below was a slope. Pretty scary! But I was enjoying every bit of it. The sunshine, the roaring engine of bus, those marvellous villages set on the slopes of rugged mountains. And the feeling that I get to travel for 10 hours like this! As we neared the boundary of Kinnaur district, Nako village was in sight and the bus stopped for almost 1 hour over there. We moved further ahead from Nako and crossed Chango village which was the last village in Kinnaur full of apple orchards. 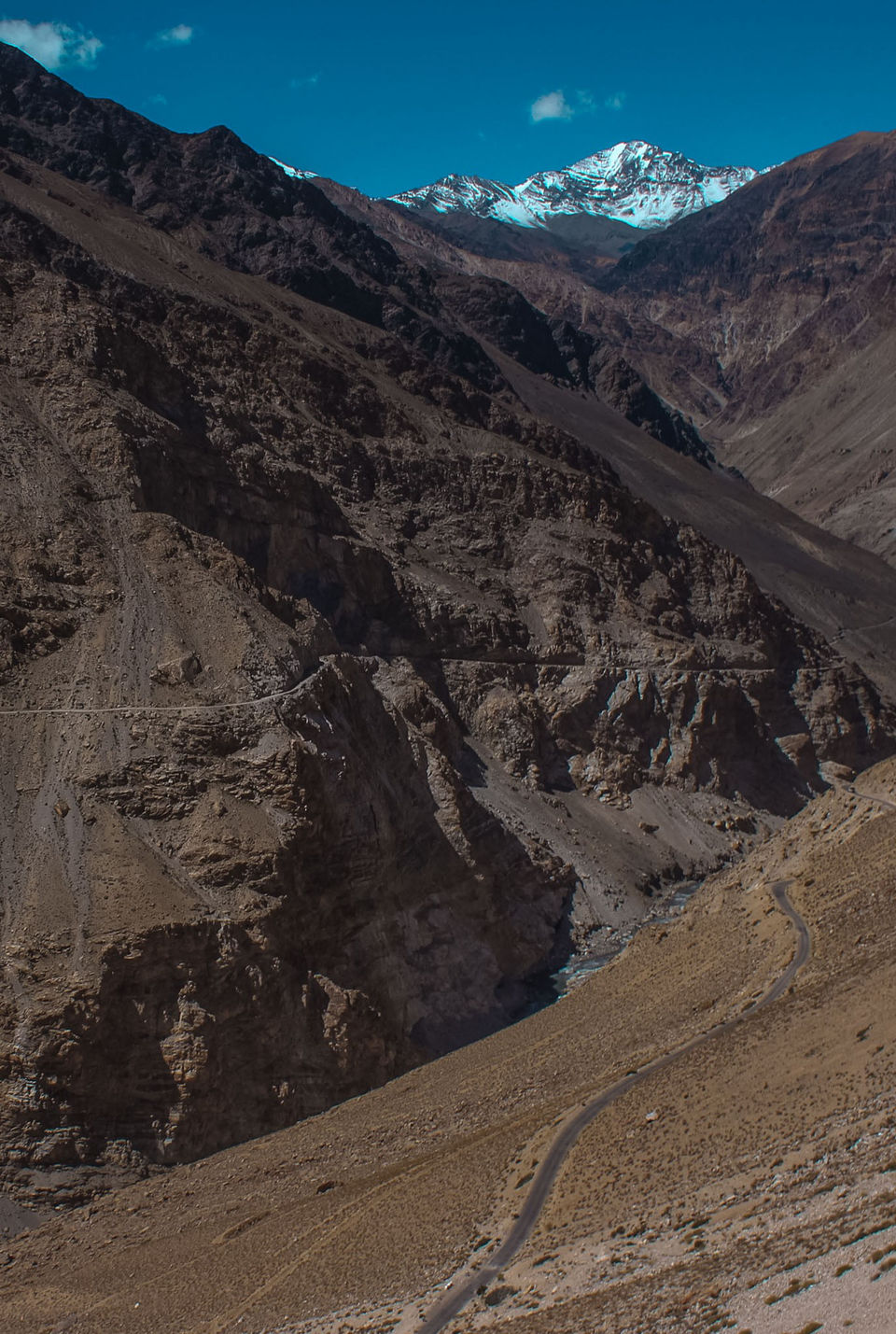 Once we crossed the checkpost of Spiti, I felt the excitement of moving a closer to a dream. I had waited long enough for this to happen and the landscape got me within seconds. Barren and humongous mountains wearing shades of brown, harsh sunlight coupled with bone chilling wind and the Spiti river flowing right by the road outside my window. Perfect recipe for drama. Only that this drama is orchestrated by nature and there are no living characters. But still the impression it leaves on you is compelling. Now the journey was getting longer but I was still feeling lucky that I didn't get the bout of altitude sickness. We had reached Tabo at around 4 PM after a gruelling 9 hours journey. The distance? 200km. The distances you see on Google maps can be really deceptive in these regions. Many of the travellers from our bus got down at Tabo, so it was basically a race to find some good place for the night before anybody else got it. But one lady who was in the same bus as ours made sure we followed her to the homestay she worked at and ohh, I also met a couple from my own city who were travellers running their own travel agency. Kind of life goals for me! Small world...

Now I must admit, that homestay was a steal deal. In fact all the 3 hotels in Spiti and Pin valley proved to be a cheap bargain for us. As we were settling down in the room listening to songs, the sun was preparing to call it a day. The sunlight on surrounding mountains was illusive enough to make them look like golden mountains. As it got darker, the only thing on my mind was to have my dinner and get a good night's sleep. But, not everything has to be merry in life. I got severe headache just hours after getting down at Tabo. It was expected. Thank god, Amol and Nupoor helped me deal with it. The expertise of regular travellers did the trick for me. Next morning I was feeling less of that headache. Meanwhile, the one shooting star we all saw during the Milky way spotting will always be special to me. ‌The late evening was spent sipping cups of tea and chatting with the owner of homestay who told us a great deal about history of Spiti. Next day, we had to get up early to see the Tabo Monastery as it was closed when we arrived. 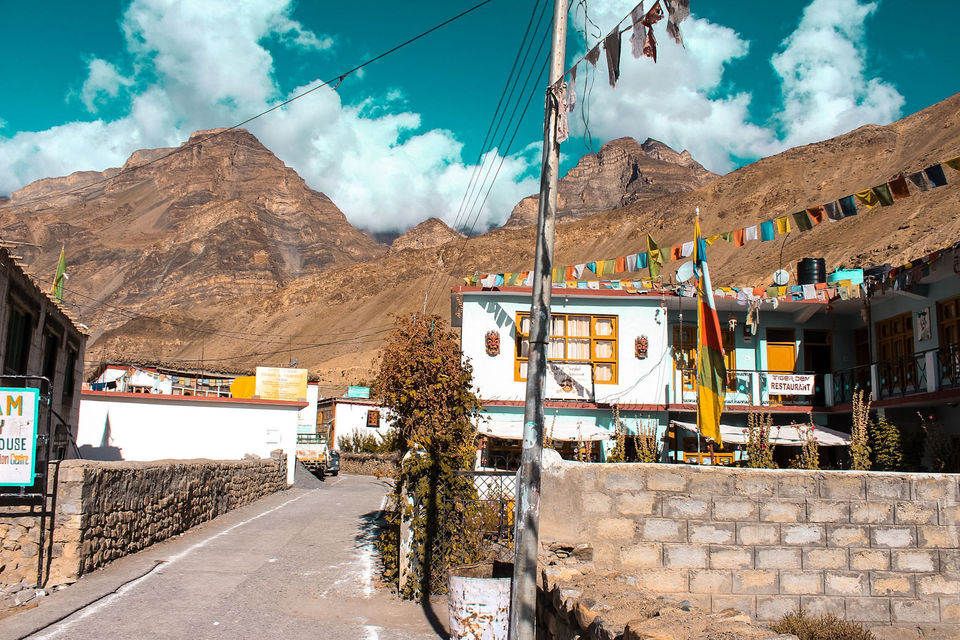 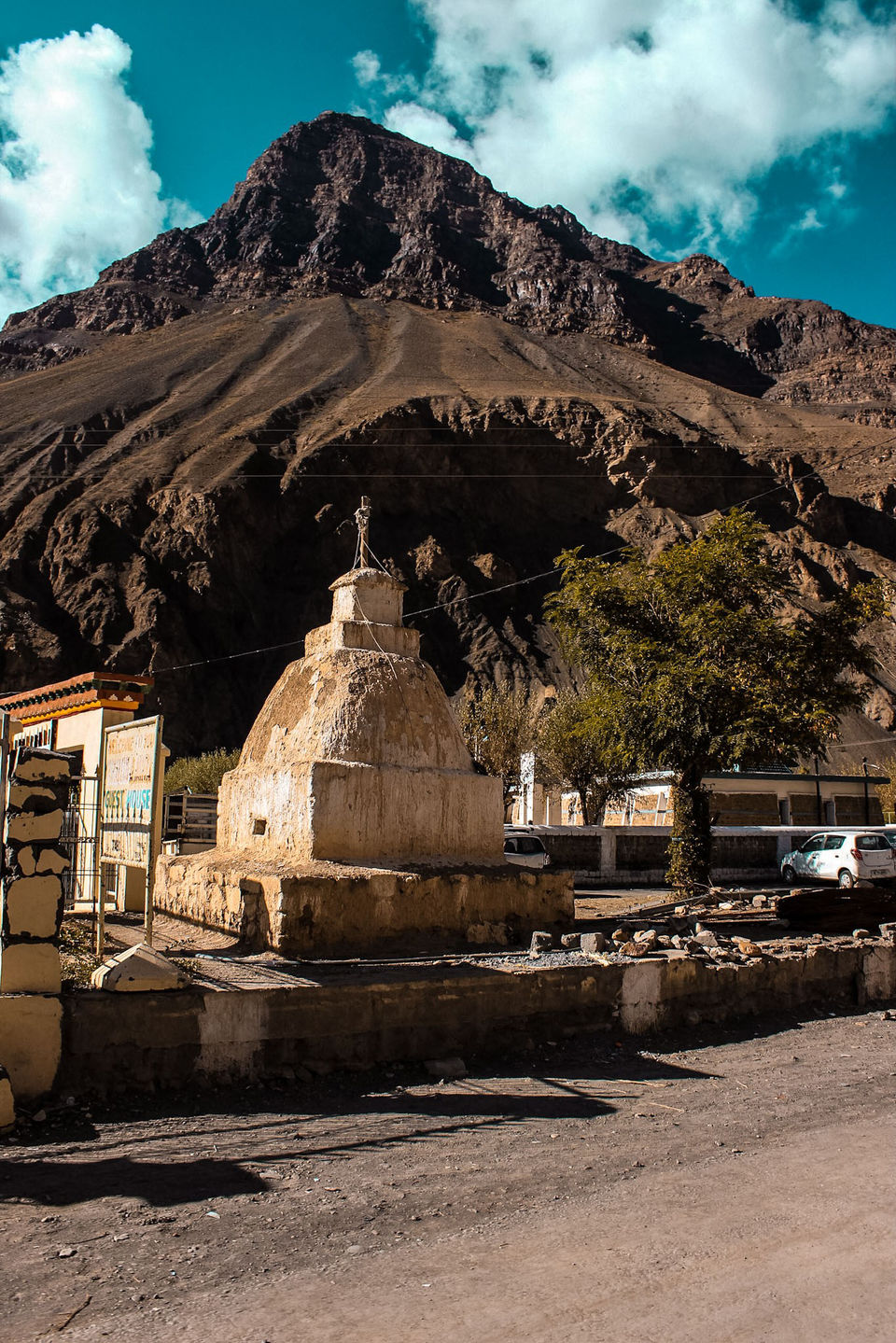 When I woke up the next day, everything was already lit. My headache had subdued and excitement was difficult to contain. In no time, I got ready and went to the monastery. The town was quiet but there were some school children doing their daily ritual and very few locals apart from that. It was sunny all over. The warmth of sunlight filled me with some comfort despite of cold. I had heard a lot about Tabo monastery before coming here. It's more than 1000 year old. Entering the main gate, the old monastery looks quite retro and the mud structure lit by sun gives a different feel altogether but after going inside, darkness takes over. The prayer room is spacious with sunrays entering from one or two windows above. This is one dramatic setting. As soon as you enter the room, you can literally feel the positive energy that flows through in that space. There is pin drop silence here. The kind which soothes your soul and calms it completely if you sit there even for 5 minutes. 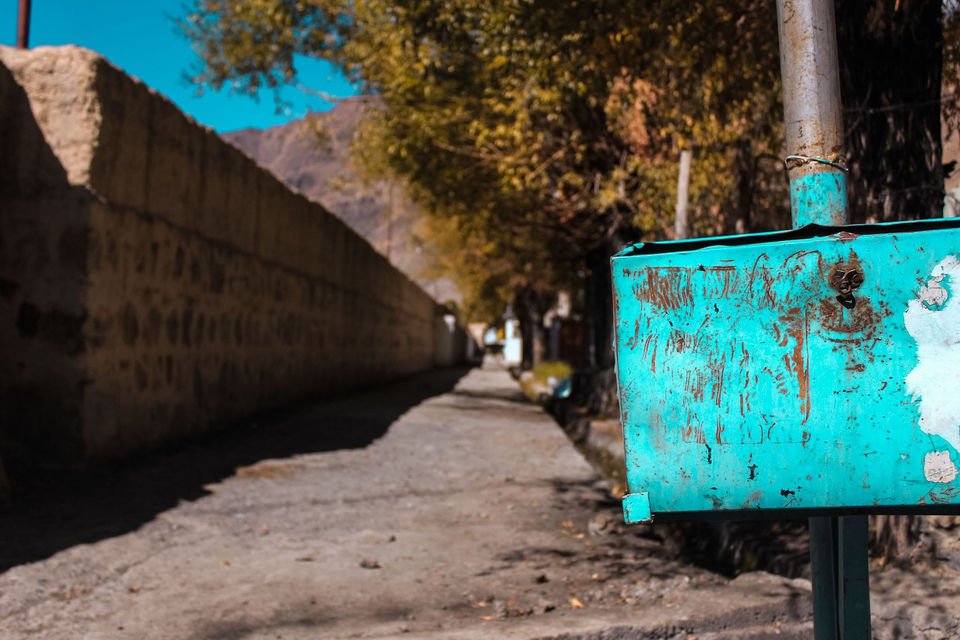 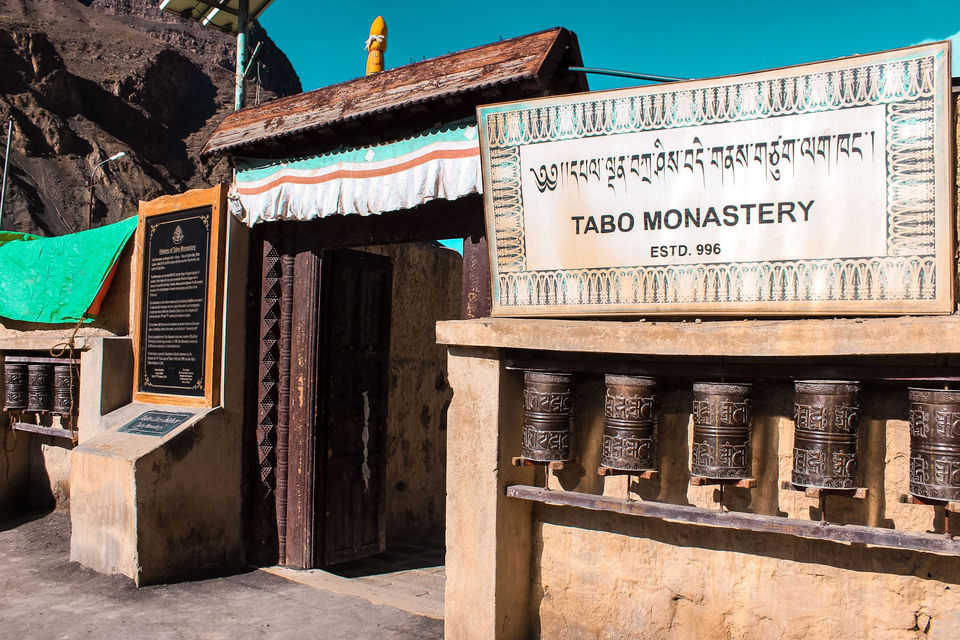 The sun rays were dimly lighting the centuries old artwork. This monastery houses some of the finest Tibetian artwork on the planet. After coming out of that prayer room, I could really feel the positive vibes resonating within me. It was a mind altering experience to say the least. This might seem like an exaggeration but that's how it was. Being not so spiritually inclined, I never expected to come out of that room full of peace when I entered it. As if, you've been to a world within a world.

As we were packing our bags and our ride for the day was on its way, we soaked in the sun and absorbed the colours of spring in the premises of our home-stay . I regret not visiting the ancient caves outside the village, though. After this monastery, it was time for another famous monastery of this region that was reckoning us. Off we went to Dhankhar.