When it comes to exploring the North Eastern part of India, people generally associate it with either Meghalaya, Arunachal Pradesh, Sikkim or Nagaland. But the truth of the matter is the fact that all the "Seven Sisters" have their own blend of uniqueness & basically the whole of NE is a cornucopia of varied culture, intermingling & intertwining of various ethnicity & a landscape so unique & diverse, it clearly is "An Explorer's Paradise".

Me being from Guwahati, Assam and being born in this part of the country, I had the priviledge of being brought up in such a culture. The spirit of wanderlust was inculcated in me way back in my childhood as I consider myself blessed enough to have been born in a family where traveling & exploring is part & parcel of life and almost all of my vacations have either been spent traveling or exploring.

The festival of Diwali this year was a big ocassion for us as it had been long since we as an entire "Vansh" didn't take up a trip for long & we were cringing at the thought of it. Due to time crunch and the job schedule we all have, we were not having the luxury of multiple days of leave and decided to make a small road trip, a day trip to the mystifying place called Sri Sri Surya Pahar in Goalpara District of Assam.

Legend has it, that The Great Sage Vyaasa himself laid the foundations for the city modelling on Kashi itself with 99,999 Shiv Lingams dotted across the Mountain Face & it was a thriving civilization centuries ago and a major trading city with naval trade routes through the mighty Brahmaputra. It was a civilization that was an amalgamation of both Jain & Hindu culture & some Historians claim that it was Sri Surya Pahar and not Guwahati the ancient seat of The Pragjyotish Kingdom. Now a forgotten archaeological site under the ASI jurisdiction, the ruins of Sri Surya Pahar now stands silent testimony to a civilization that was once revered and considered "The Kashi of North East".

We started early in the morning at around 07:00 hrs from Guwahati & with breakfast break in between, we reached the Archaeological Site around 11:00 hrs. The whole of the Site now lies as a ruin and void of any human population, though local vendors & the locals throng the site in the day time. As prevalent as any other site in India, the whole place was swarming with monkeys and we were a bit apprehensive. But thanks to our lucky stars, the monkeys were pretty docile & hardly cared for any "Puny Humans" while they were busy nibbling on the nuts & fruits offered to them by the local tourists.

The whole site being scattered over a big mountain range, we were at a loss for where to begin & where to go. As we were eager to know of the history that lies behind such an ancient civilization, we were looking for a Guide to take us through the place and give us an insight to the history behind the place. Fortunately for us, we found a local elder who was well versed in the history of the place & seemed genuine who agreed to tag along with us to give us a proper tour of the place and shed some light on its history.

What got my attention was the legend of the Shiv Lingams was actually true as we saw innumerable Shiv Lingams both sculpted & natural dotted across the various rock cut caves of the mountain. We first went to a Temple dedicated to Lord Shaligram where we paid our obeisance to the Deity & took our turns to explore the caves & the Lingams all around the place. Following the temple, we went to an excavation site which was the Town Hall attached with A Great Bath and a temple dedicated to Lord Rudra,though in ruins now.

From the excavation site, we made our way through the ancient rock cut alleys immersing ourselves in awe over the ingenuity & marveling at the dexterity and sleight of hands of the ancient masons & sculptors who chiseled out some magnificent carvings out of nothing but a simple boulder. Being from Assam itself, I never knew Jainism was prevalent in such proportions in ancient Pragjyotish Kingdom and the various carvnings, inscriptions & monuments hold testimony to the fact that Jainism & Hindusim was indeed practiced in this part of the country. I would like to mention that the entire site is spread over a vast Range & it shall take well over a day to completely explore the site with its monuments. Combining steep ascend of the mountain through ancient and narrow rock cut lanes now completely under the mercy of the engulfing forests, it was by no means an easy job to do. As sun set was upon us, we finally bade goodbye to the location around 15:00 hrs for our onward drive back to Guwahati fully refreshed & in admiration of a place that has lost itself in the pages of History; thus, truly giving the name of Sri Surya Pahar, "The Civilization Lost in Oblivion", few venture out to, very few know of. 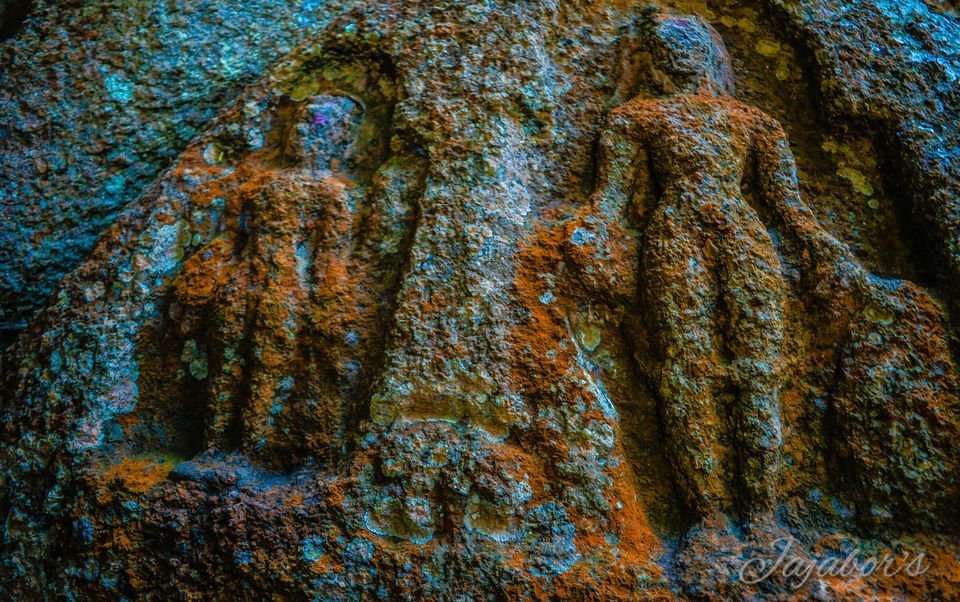 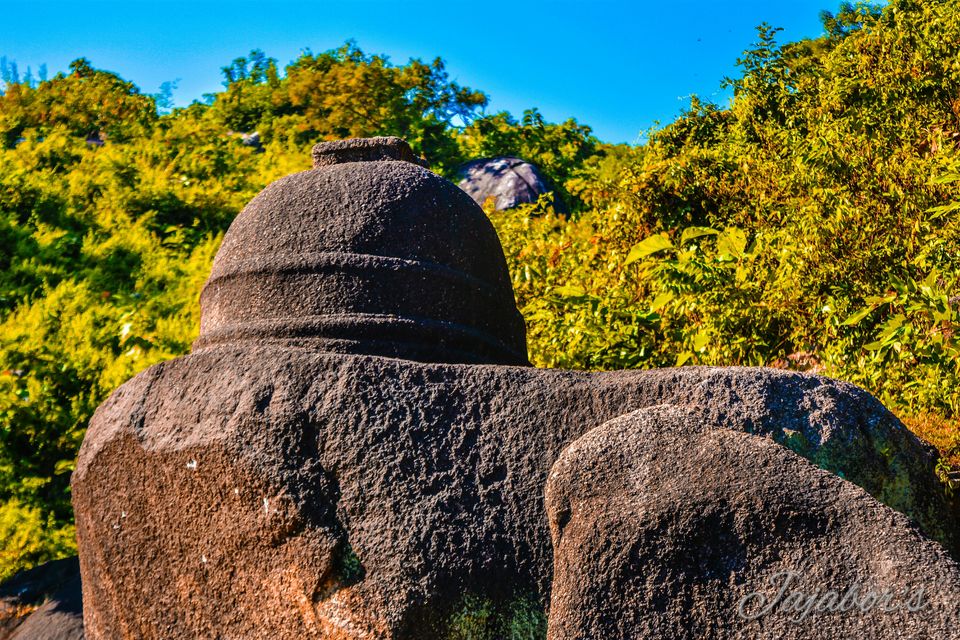 Caves as such dotted the entire mountain face. 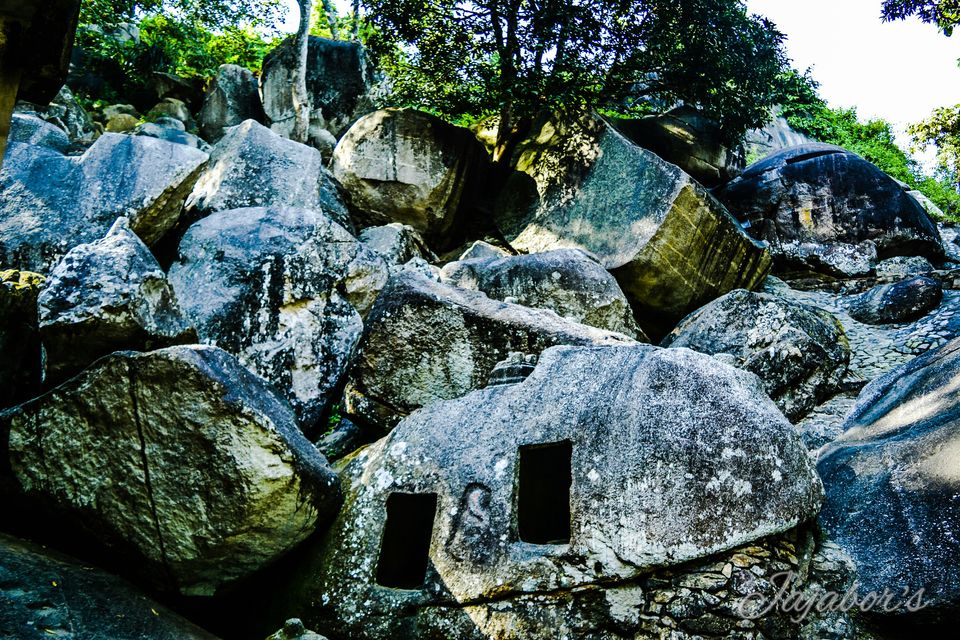 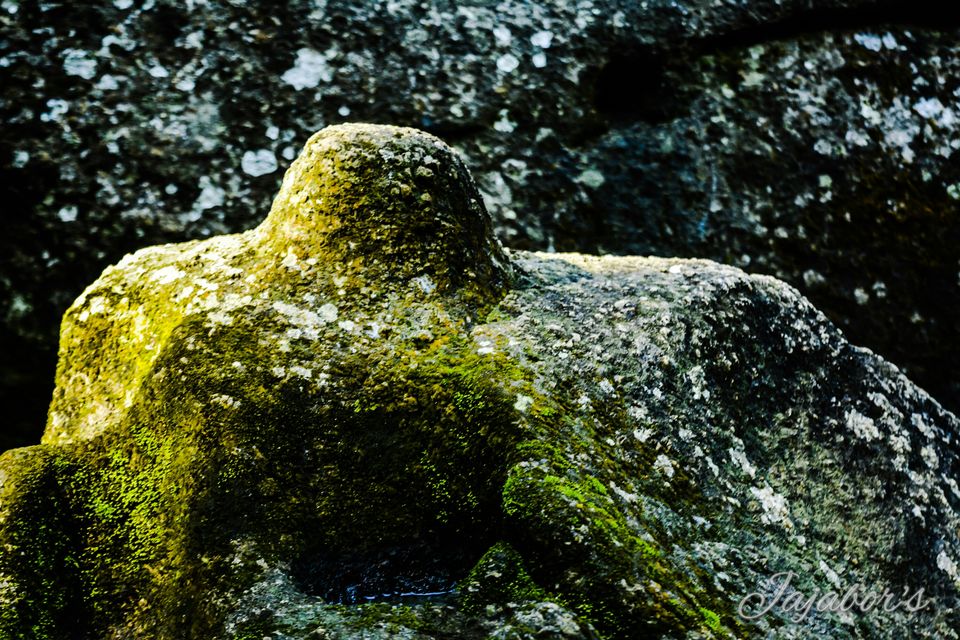 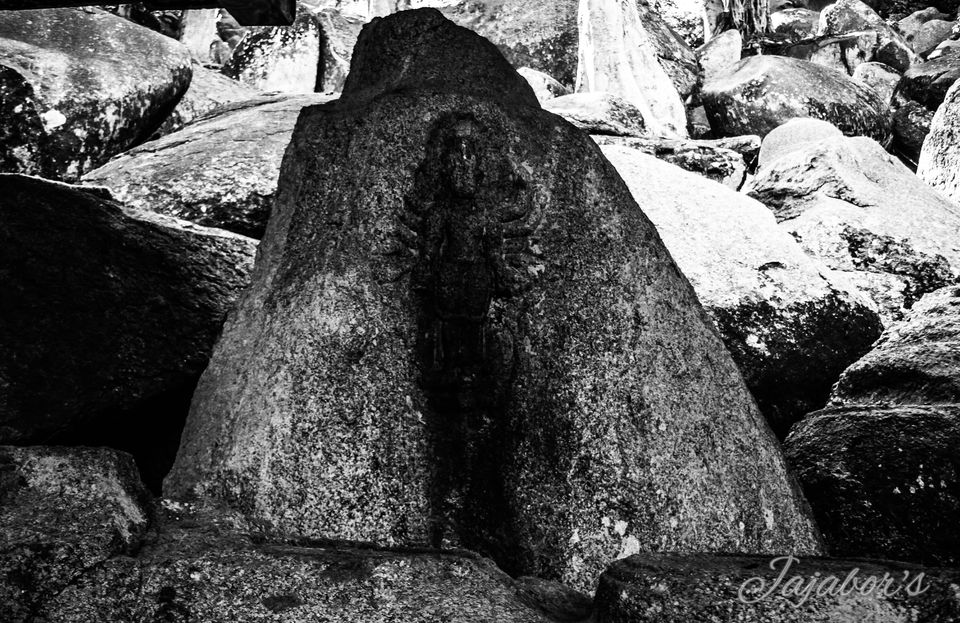 The Town Hall Centre..now in ruins 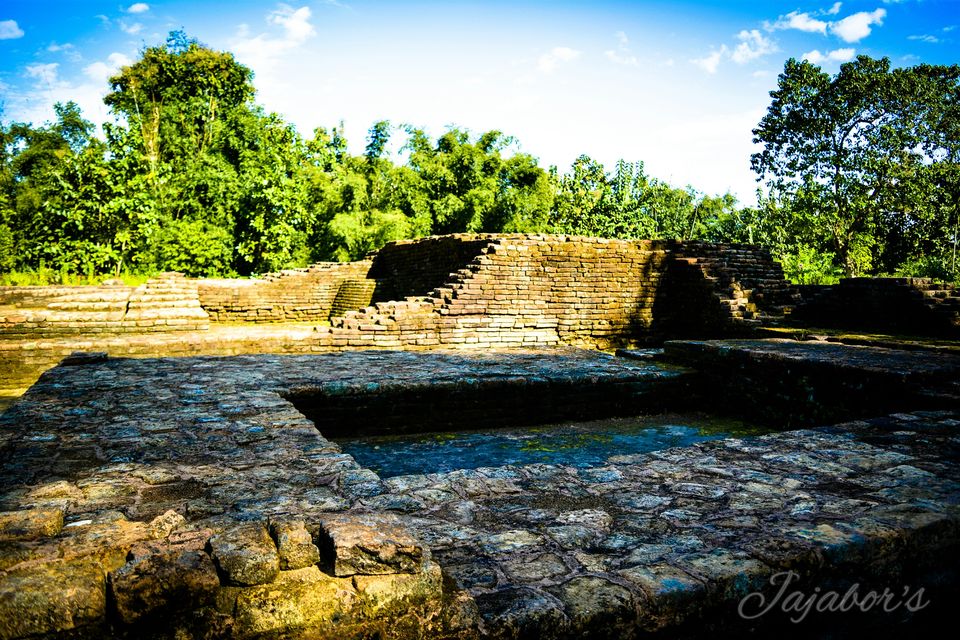 Aqueduct of the bygone years 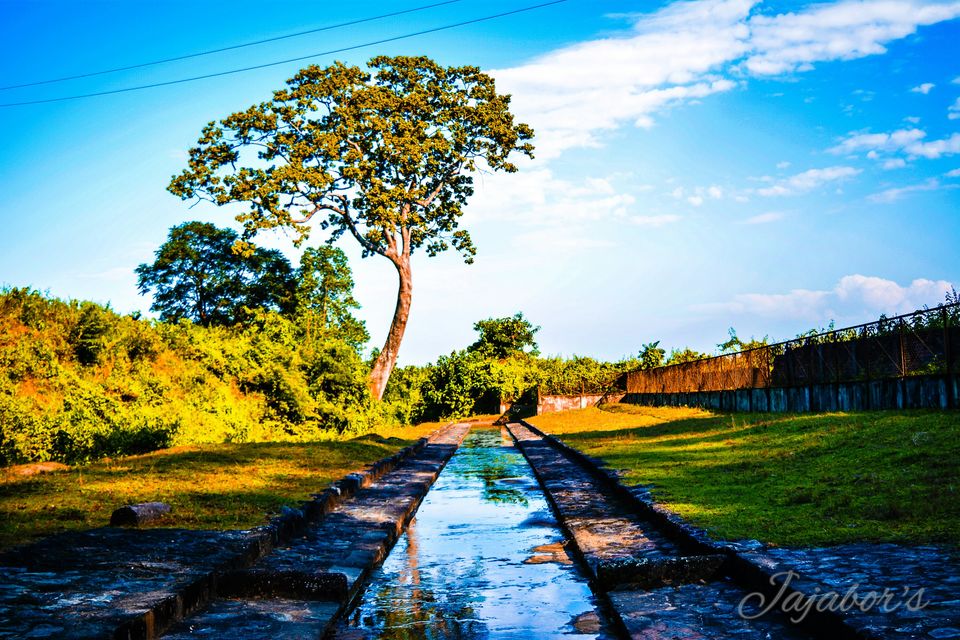 The route through the Site 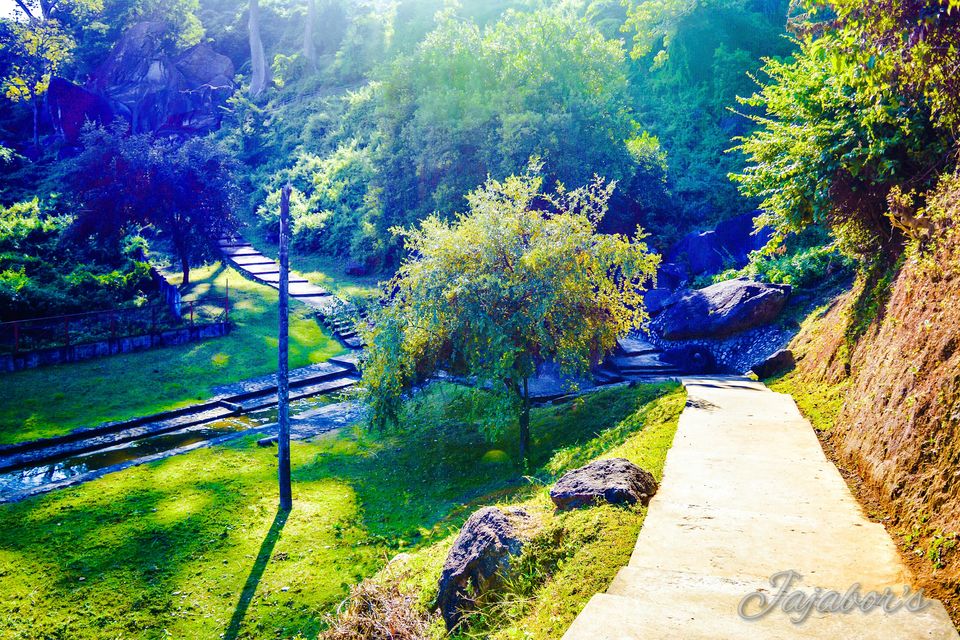 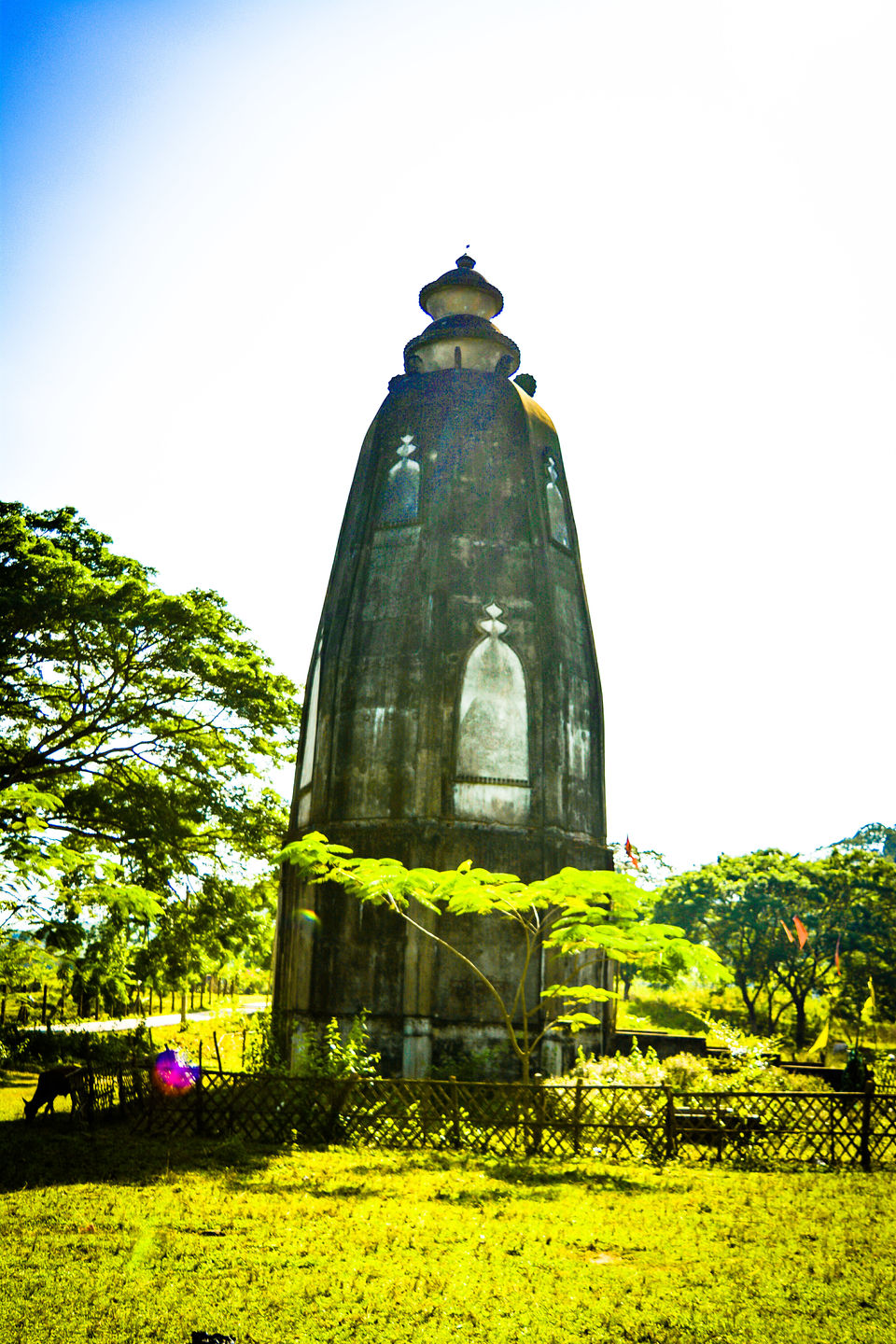