A beam of wisdom from city of eternal light 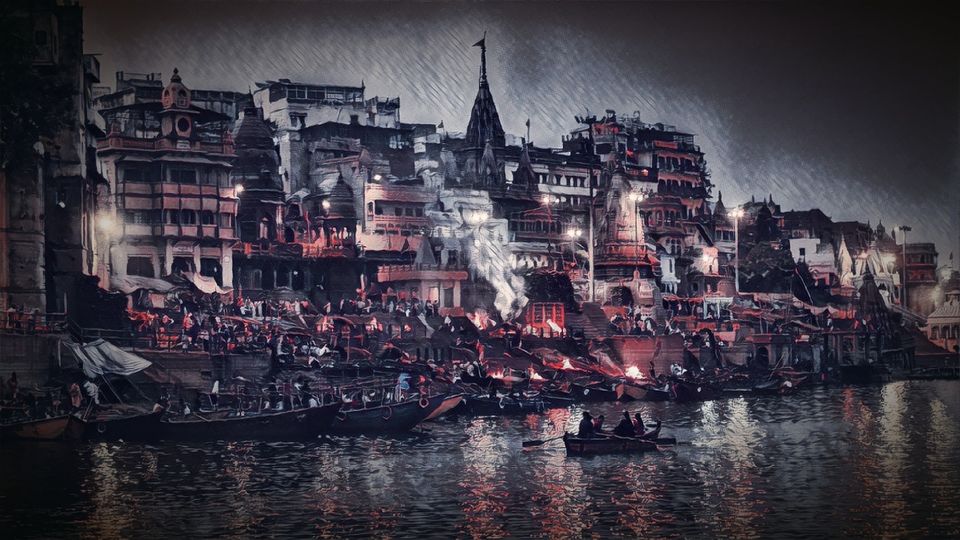 A walk on the ghats of Varanasi during sunset is a very pleasant experience, what’s more liberating is, to watch a burning pyre on Manikarnika ghat during nightfall. Having tasted it on my very first day in that city, I made sure I didn’t miss it for the rest of my stay there. On my second visit to that stormy yet placid place I found something more intriguing..... a man. He seemed to be in his early forties, he was tall, well built, was sporting a long grey beard and braided hair. He wore a brown kurta and saffron mundu with a big scar on his face and a prosthetic hand, he looked like a war veteran. The most peculiar thing about him was his eyes…deep brown eyes, those always were staring either into the eternal flames engulfing the dead or into the never-ending emptiness of the skies. If they were doing neither of those, they would be gazing into his old scribbling note in which he wrote something every now and then.

Next evening, I went there hoping to see him again, he was sitting at the far corner of the steps indulged in his little book. I went and sat next to him and greeted him with a ‘hello’, he acknowledged me with a brief nod and a smile and got back to his work. I am not a person who invades other’s privacy but curiosity took over me.

“Fascinating place, isn’t it?” I said.

“Perhaps, it all depends on our location in the theatre while the act is in play”, he said without taking his eyes off the book.

“Yes, indeed. so, may I ask where do you stand in this theatre?”

"I dont know, may be it is within the nature of oddity to attract curiosity."

“I am feeling hungry, would you like to eat some bhel puri? We get the best on the Assi ghat”, he said closing his book.

“Assi ghat!!! That is two kilometers from here”, I grimaced.

“I thought you are young enough to walk that far.”, he grinned.

“You haven’t answered my question.” I said as we started to walk.

“It is never a fixed one, it changes with times but believe me I have been all over the place.” He replied.

“Sounds like quite a story, do you mind sharing it with me?” I asked.

“Nothing new and interesting, routine flick of an old man’s afflicted journey through life.” he said.

“I'm a firm believer of the fact that every story is unique and carries its own essence”.

“With all due respect sir, but isn’t that the best thing to do when you are caught up with a man who is twice older on a seemingly long road?” I winked. We laughed together.

“Fine then, I’ll keep it short” he said, letting out a deep sigh he started with his narration.

“I belong to an Australia settled Malayali family. My parents moved to Australia long before my birth. Both my parents were doctors, our family was quite well off which enabled me to pursue my passion. My interest for archaeology and Indian culture brought me to India and got me an admission in Deccan College, Pune right after my schooling. That was where I met this girl, Madhavi, my classmate’s friend. She was a charmer who had a way with words. Such an expert in finding a way to anyone’s heart. On the other hand, I am an introvert who shies away from people. We had many such differences yet we had our similarities, maybe it is because of that assortment our friendship took off with ease. Our love for travel took us to many places and gave us more insight about each other, which eventually strengthened our bond. People usually say, ‘A cup of Tea makes everything better’ if it is any true, she was my cup of Tea. She was stubborn and annoying yet lovely and amusing. I fell for her, fell so badly that I couldn’t imagine a life without her. Three years passed just like a breeze, I completed my graduation and was employed with Archaeological Survey of India. I thought it was the right time to tell her how I felt for her, I presented her a special gift which embodied my intentions for her and asked her if she is willing to marry me. After taking her time and giving my proposal quite a thought, she rejected my proposal. When I asked her for the reason, she said there was none but her fears were quite discernible.” He seemed to be drifted back to those days.
“You know something boy, Hate is not the worst enemy of love. Fear is. It destroys the ability to trust.” He said removing his soiled glasses to wipe them clean.

“I tried, tried hard but my rationale failed at convincing her stubbornness. At one point she successfully convinced me that she hates me, the very thought of her hating me and not having her in my life scourged me. As it was not already too much for my heart to endure my mom passed away. I isolated myself and moved away from that city, traversed the whole continent until I landed in Varanasi. This city offered me a job, solace and finally a life to live. I bought a house and brought my father here. Finally when everything started to fall in place a catastrophe occurred and it shattered my life like never before.”  He said putting his glasses back.

“A year after becoming a professor at BHU, I had to go to Chennai on an official duty. After finishing my work for the day at Madras University I took a cab to my lodge. There was a railroad crossing en route, it was almost twelve in the night by the time I reached there, the signal was red and the sound of train approaching was audible from a distance. That is when I saw a woman sitting on the track little far from us with a child in her lap in the flickering light of a lamp post. My cab driver noticed it too. We jumped out of the car and ran towards her shouting and asking her to move away as the train was speeding towards her. She heard us, turned towards us and ignored us. She seemed so determined to die. That night was so dark except for the dull light from the lamp post and the lights of the train speeding towards us were frighteningly evident in that darkness. We increased our pace and were running as fast as we could. Train got closer and closer by every passing second, the locomotive pilot may also have noticed the havoc he started sounding the siren. I never heard such a petrifying sound ever before in my life. We reached that lady seconds before the train and started pulling her off the tracks forcibly, after a little struggle I managed to pull the child off her hands and handed over to the driver. By then train was only a few feet away, in the light of the train I looked at the face of that lady. It was Madhavi. I winced, aghast at the sight. Even before I can sink in any of the happenings of that fateful night into my mind we were hardly struck by the train and thrown away onto the gravel heap next to the track. There we were, lying a few meters away from each other fighting for our lives. I always had wished to meet her again in my life but this definitely wasn’t the way in which I was expecting our meeting to happen. I was badly hit, my right arm felt completely numb and i was bleeding profusely from all over my body, yet I was in no mood to worry about my plight. As I regained my senses I crawled close to her. She was squirming with pain when I took her head in my arm, she smiled at me and fell unconscious and I collapsed next to her.”

“My cab driver was a kind man, he called an ambulance, informed the university and he also took care of the child until my father arrived. I gained my consciousness after three days, only to know that she is in a coma battling death. Cops visited us regularly for a month or so, they suspected domestic violence to be the provoking cause of her suicidal tendencies. I also learned that her husband fled away from this country. It took three months for me to recover completely. Doctors replaced my lost arm with a prosthetic one. A month later I re joined my job and court has granted me custody of the child. Slowly everything started to come back to normal but she was still lying there on the bed unaware of the things going around her.” He said with a heavy tone.

Mean while we reached Assi ghat, he pointed at a small roadside chaat stall indicating that it was the place he mentioned before. We walked to the stall and ordered two Bhel Puri.

“Bhaiyya ek mein meetha mat daalna.” I explained the chaatwala how I want it to be.

I just couldn’t help but wonder how this man is managing to stay so happy, even after going through such excruciating pain in life.
I asked him the same.

“My life has taught me one thing, ‘life is what you perceive’. If you see it as a misery it becomes more miserable but if you see it as an opportunity to grow life becomes bliss. Time is slipping away for all of us at the same pace, no matter however you live you are getting closer to your grave with every passing day. So why not live it in the happiest possible way.” he said.

I couldn’t help but look at this man with admiration.

“What happened to her after that?” I asked him.

“She came out of coma six months after the accident but with a completely erased memory, Amnesia took over her. In see it as a blessing as she will never have to live in that tragic past again. As she has no one who can be called her own she chose to stay with me, making me the guardian of two children.” He said smiling to himself.

He continued, “We are humans we tend to do mistakes and some of our mistakes may affect the people around us. Speculating an act after it is done or playing blame game will never aid a suffering soul rather a little empathy can make a lot of difference. This very thought lead me and my father towards starting an orphanage. My father completely devoted himself to it, now we have thirty more children in our family.”

“Oh!!! It’s time, I need to leave” he said checking his watch.
While I was searching for the right words to express how I felt about him and that evening, he tore a page from his scribbling note gave it to me and disappeared into the crowds of evening Ganga Aarti.

It was pencil sketch of a pompous cremation ceremony.
“Even death is a celebration, if you have an eye for life.” is written with his signature under it.

I was totally taken aback by this stranger. I sat there silently, contemplating my life about which I always tend to complain despite of it being amazing.

As a child I heard and read many fables, almost everyone of it ended with a ‘happily ever after’ note. Growing up, I wondered how every story can have a happy ending. Today I understood that stories just end. A happy ending or a sad ending is what we perceive. May be all those stories were intended to cultivate that perception in the little minds.