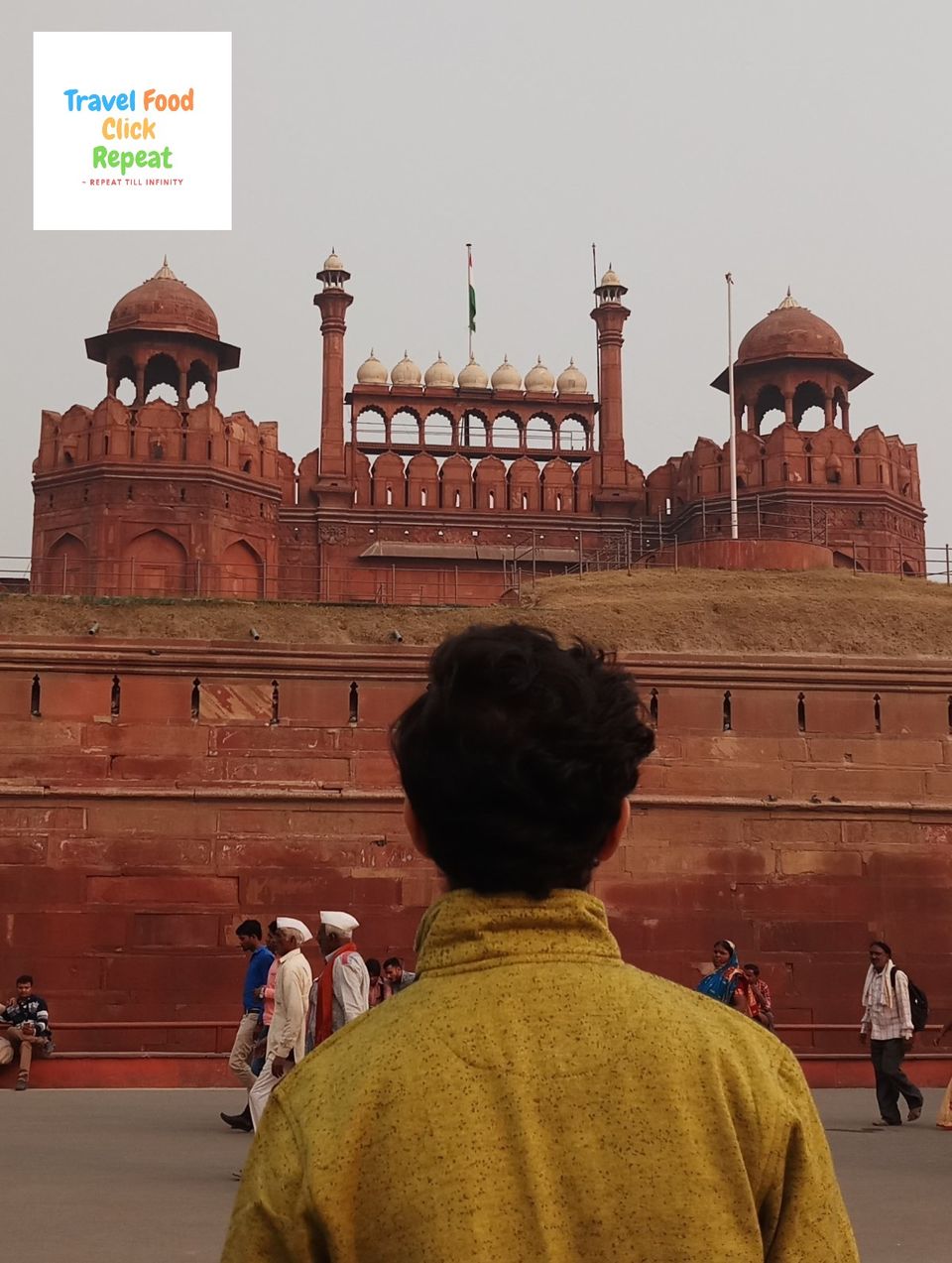 Red Fort is a historic fort situated in Chandni Chowk, Delhi. Being built by the Mughal Emporer Shah Jahan, Red Fort remained as the main residence of the Mughal dynasty for almost 200 years. The decision to construct Red Fort was taken by Shah Jahan in 1638 when he shifted his capital from Agra to Delhi. It took 10 years to finally complete the construction of this fort.

Also Read: A Guide to Chandni Chowk in Delhi | Where to go for Whom?

Earlier being known as Quila-E-Mubarak (Blessed Fort) by the local people, Red Fort is today a UNESCO World Heritage site. It attracts thousands of visitors every year.

We went to visit this fort at 1:00 PM. For visiting the fort, we bought the entrance token, which one has to keep for the exit too.

A View of Meena Bazaar 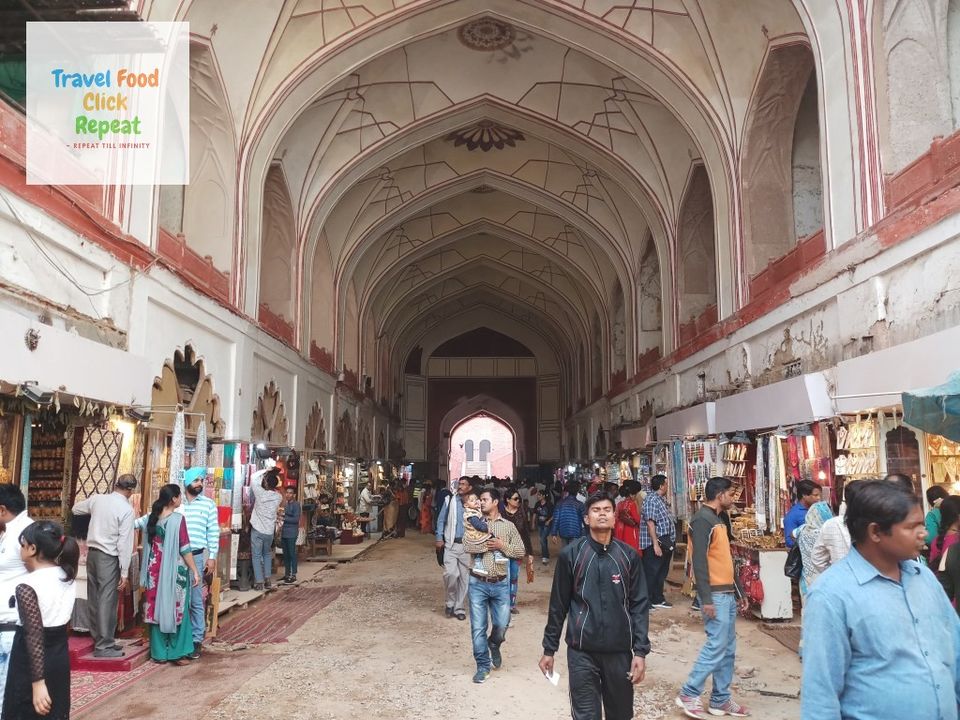 After the security check, we entered the Meena Bazaar in the fort. Meena Bazaar has near about 40 shops selling embroidered bags, carpets, artificial jewelry, Indian lehngas and much more. In the Mughal Era, Meena Bazaar was only for the women in the harem, Rajput ladies and the ladies of the noblemen.

This was only for the purpose of joy, entertainment, and charity. At that time, it was also known by the name Bazaar-I-Musaqqaf or Chatta Chowk (Covered Bazaar). The notion of this bazaar was stimulated by the one, Shah Jahan saw in Peshawar (now in Pakistan). During Shah Jahan's time, there were shops on both the upper and lower levels, but today it is open at the lower level only.

A Snap with British Bungalows 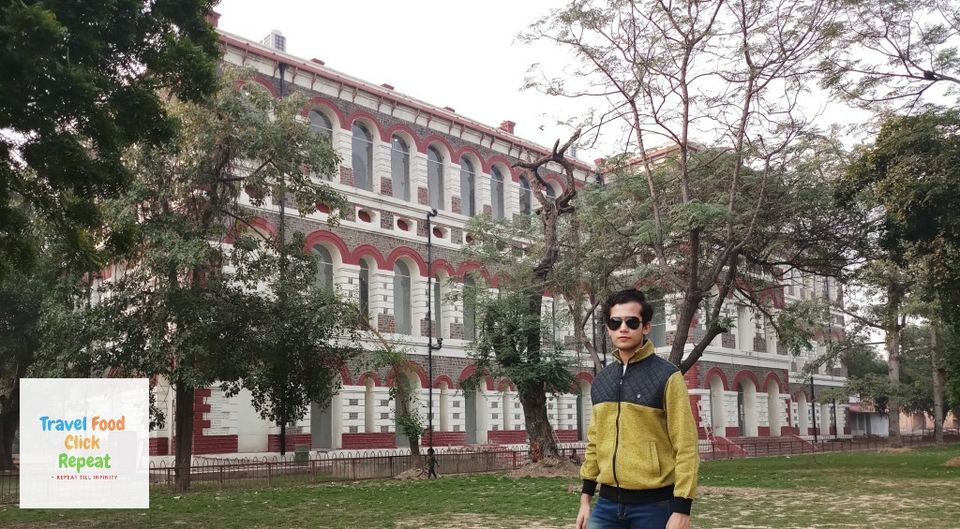 As we move forward after exploring Meena Bazaar, there comes bungalows and cottages which were earlier made and used by Britishers during the 18th century and later used by Indian Army. The inner and the outer court are separated by the huge entrance gate called Naubat Khana.

Naubat Khana is basically a drum house, which was used to play the music during the Mughal Era. From here, the musicians used to play Nagadas, Shahnais and various other instruments to inform the arrival of the emperor and other dignitaries.

There was a tradition that everyone except the royal blood had to leave their elephants or horses at this place, in order to further enter into the inner complex of the fort. Naubat Khana was made with red sandstone and covered with white plaster. It has blooming floral designs on the walls, which was originally highlighted with gold.

One should note that opposite to the Taj Mahal in Agra, here all the designs on the back side of the house have the cherished flowers. It is probably due to the fact that King used to stay in this place. I am only guessing!! 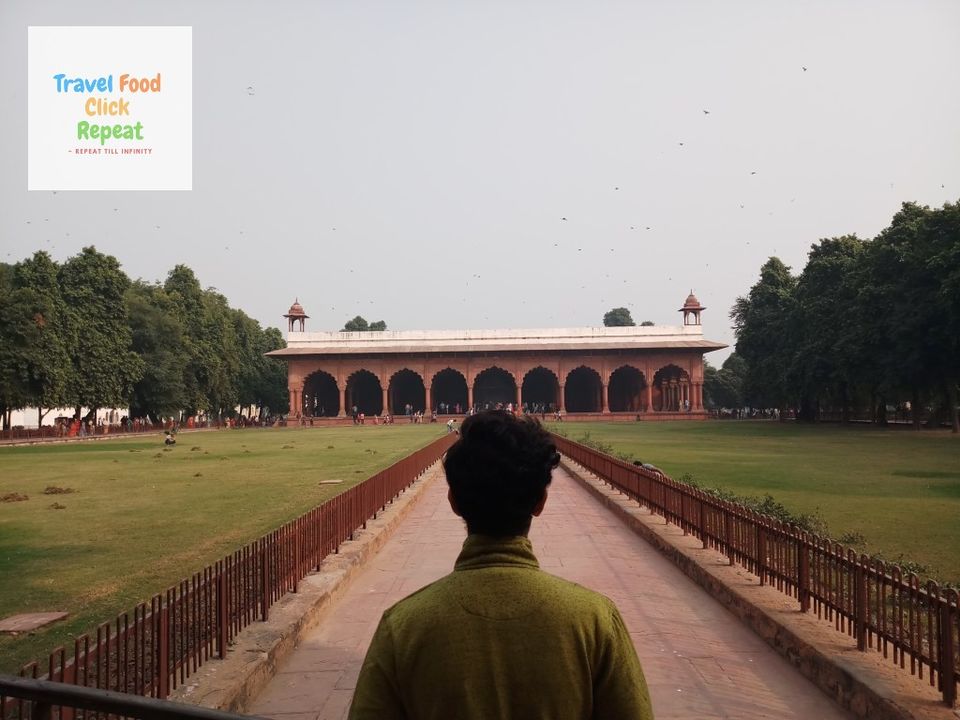 Diwan-I-Aam ( Hall for Public Audience) is an open hall which has nine front-facing engrailed arches. This is the hall where Shah Jahan used to meet the general public and resolve their grievances. Apart from this, he also used to pass the judgments and grants related to the matters of the daily administration of his empire.

In the middle, this hall has a white throne where Shah Jahan used to sit. The throne was also referred to as Nashiman-i-Zil-i-Ilahi or 'the seat of the shadow of God'. Nowadays, the same is covered with a boundary of transparent glass probably to save it from dust and from the visitors that may touch the same otherwise. 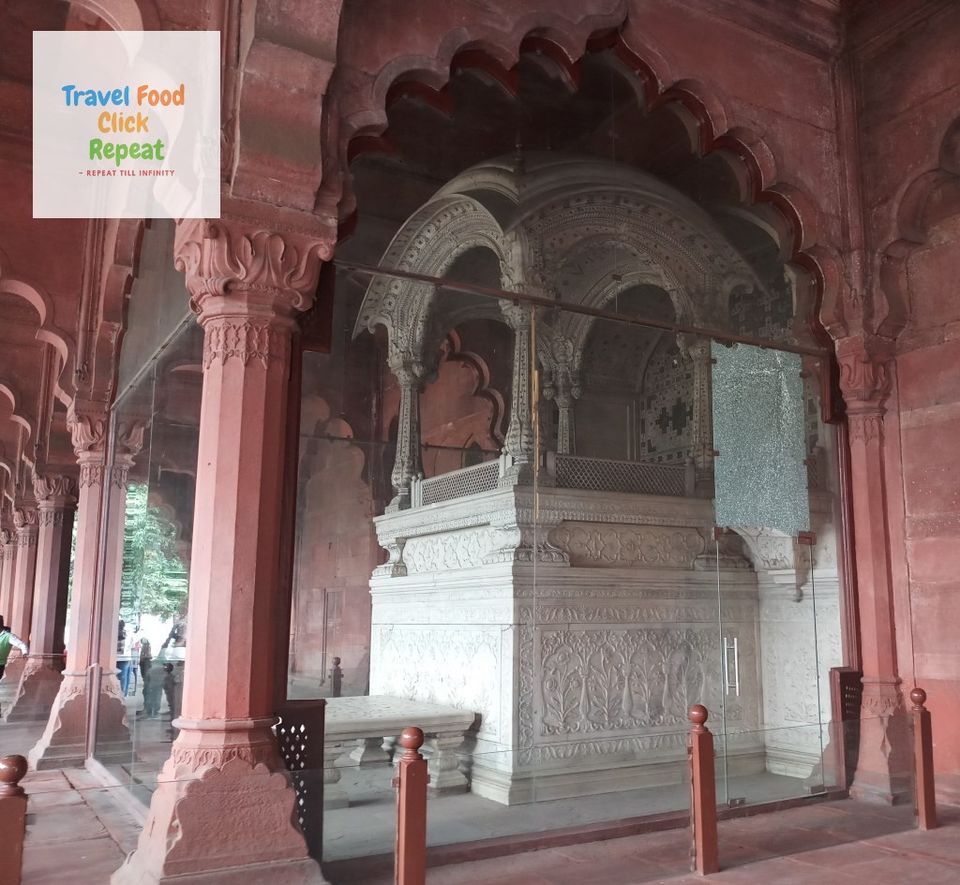 I thought that its time to break the glass, sit on the throne and rule the people of India. I was like its that easy to rule India, you just have to break the glass. Then I got a strike in my head, idiot!! India is an Independent Country. India is already free from the rulers about years ago. But honestly, just imagine you have a private fort with an army. it feels good, right!!

After this, we went ahead. Earlier, beyond this, it was a private area where the general public is not allowed to enter. 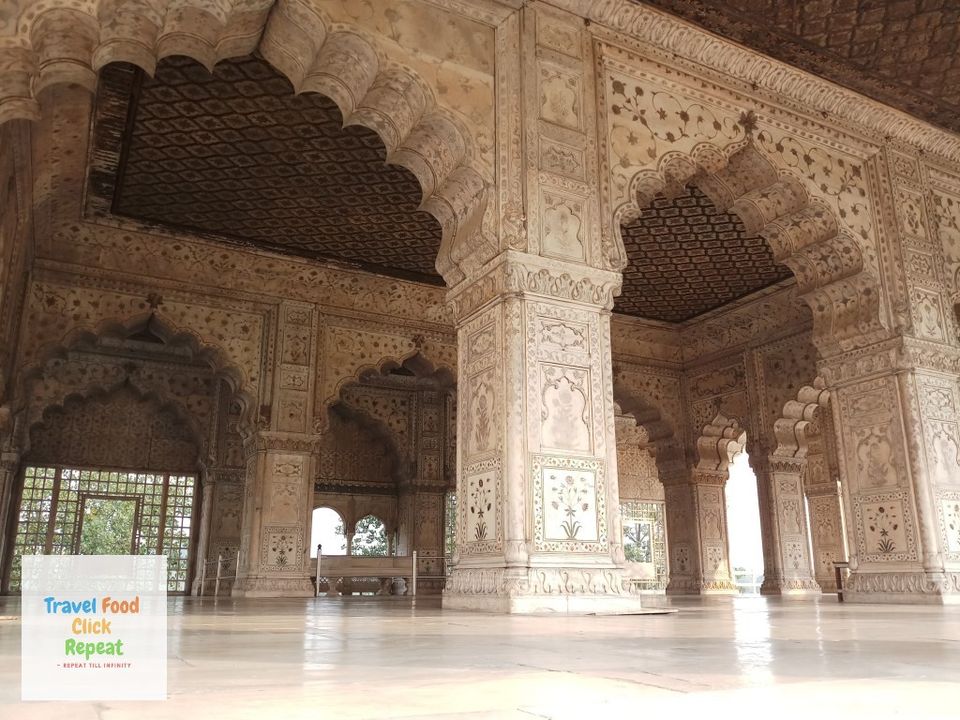 Diwan-I-Khas (Hall of Private Audience), like Diwan-I-Aam, is also an open hall but with front-facing five arches. In this hall, Shah Jahan used to meet his ministers having high ranks, honorable guests and other important people.

In the Mughal Era, the main attraction of this place was the famous "Peacock Throne" which was entirely made up gold and also have rubies, gems, and emeralds of different shapes and sizes. Shah Jahan used to sit on this throne with a ring having attention grabbing Kohin diamond in it.

After the invasion by Persian Emporer Nadir Shah 1739, the original Peacock Throne was taken by him as the war trophy. Afterwards, a replacement of the throne was commissioned, which remained until the 1857 Indian Rebellion. Nowadays, you can say that it just has the leftover. 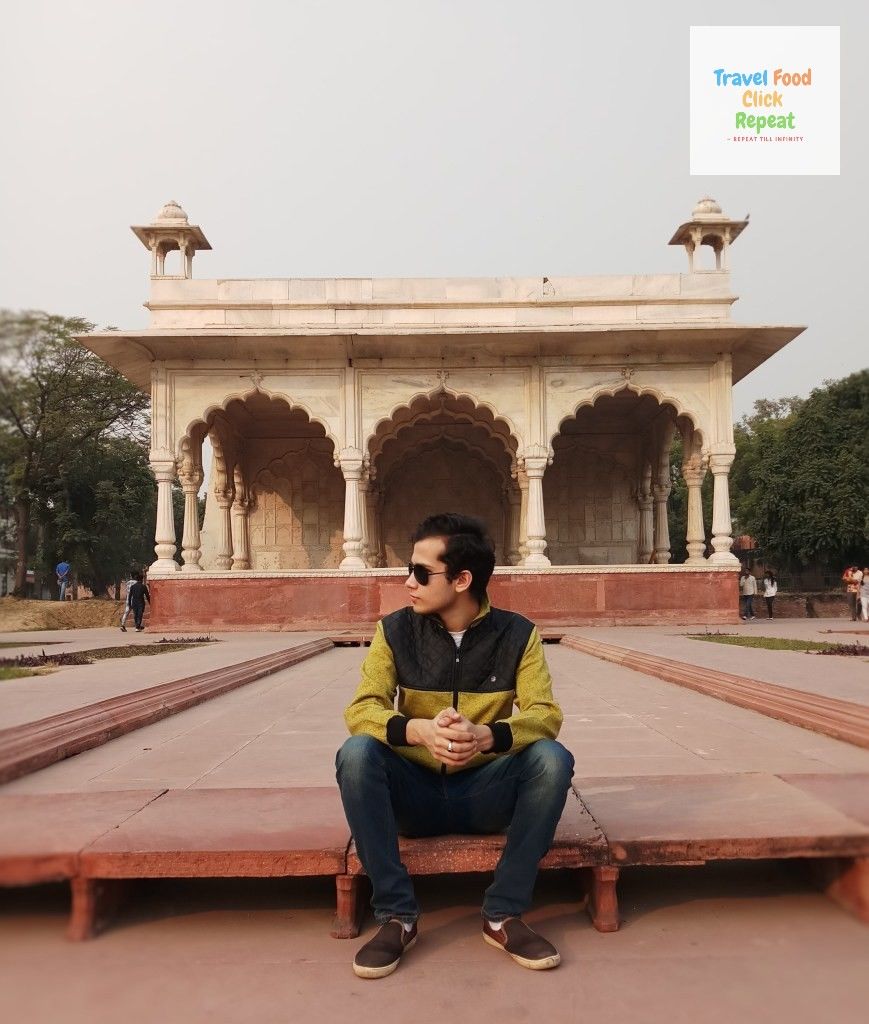 Rang Mahal - Rang Mahal in English means 'Palace of Colours'. During the Mughal Era, it was used as residence of the Emperor's wives and mistresses. In the center, it has a shallow canal which is known as Nahr-I-Bihisht. Under the palace, there is a basement which where used by the royal women to cool down during the hot summer days.

Khas Mahal - During Mughal Era, Khas Mahal was used as the Emperor's private residence. It has three parts, namely, the chamber of telling beads, sitting room and the sleeping chamber. Khas Mahal is connected to an octagonal tower namely, Muthamman Burj, from where the Emperor used to address the people.

Mumtaz Mahal - In Mughal Era, Mumtaz Mahal was the part of women's quarter or Zenana. Many queens used to live there and in several other buildings which were later destroyed by the Britishers. During British rule, the same was used as a prison camp. Now, the Red Fort Archaelogical Museum is situated here.

Moti Masjid - Moti Masjid in English means 'Pearl Mosque'. It is a white marble mosque built by Aurangzeb for his second wife Nawab Bai. The main prayer hall has the three arches which are divided into two aisles.

Apart from all this, you can also see the Light and Sound Show which is of around 1-hour and showcases the history of Delhi and Red Fort. Every year on the Independence Day of India, the Prime Minister hoists the National Flag at the main gate and delivers a speech from its ramparts. It is one of the most popular tourist destinations and attracts thousands of visitors every year.