My introduction to Tamil Literature and South Indian History was various book of Kalki. Sivagami Sabadham was one of his top 3 novels and covered the pallava dynasty during the period of Mahendravarman I , Narasimhavarman and a brief intro of his son Mahendravarman II at the very end. The book is a classical fiction based on the events during the period, Sivagami, the leading lady herself is a fictitious character.

The book sings praise of King Mahendravarma Pallavan as someone who is kind and virtuous. He was a scholar, architect, musician and painter and had written several plays. The sittanavasal Jain caves may be dated to his period. He also constructed the light house in mahabalipuram and was pioneer in rock cut architecture found in trichy pallava caves and rock cut temples of Mahabalipuram.

It is during his period that work on 'Mahabalipuram' was initiated and was later completed in the period of his son 'Narasimhavaraman'. Despite the advancing sea that has consumed much of the work of art created in there, the remnants stand testimony to the work of art. Narasimhavaraman, who was an expert in wrestling was known as 'Mamallan' or the great wrestler extended his name to the place.

But my post today is not about the Pallava heros. But the heavily misrepresented villians of 'Sivagami Sabadham', the Chalukyas. First, a back story, Chalukyas ruled over all of Karnataka, Maharasthra and most of United Andhra during their period which extended for nearly 600 years. The Chalukya dynasty was established by Pulikesi I with its capital as Vatapi or the current day Badami. They were known as the early chalukyas.

Pulikesi I was followed by his son, Kirtivarman who died a premature death. The throne was taken over by his brother Mangalesha as Kirtivarman's children were too young. Managalesha was an able ruler and built on the empire. However, Prince Pulikesi II felt his uncle was attempting to usurp throne for himself. Pulikesi II was sent to exile by Managlesha. Pulikesi II returned from exile with the help of neighbouring kings, defeated and killed his uncle to take over the Kingdom.

The new king was challenged by several small warrior tribes. Neighboring small kings who were hitherto under Mangalesha, declared themselves Independent. Rebellion was waiting everywhere. Pulikesi II defeated the enemies, quelled the rebellion and established himself as a capable commander. Not only the warring small kings were brought back under the fold, several others meekly submitted without a fight.

During the time, the northern part of the country was ruled by Harsha Vardhana of Vardhana dynasty and in the south, the Pallavas had established themselves well. PulikesiII 's biggest victory was against King Harsha, Harsha's life history has been captured by his court poet Banabhatta in the name of 'Harshacharita'. King Harsha attacked chalukyas and met with a humiliating defeat. Although 'Harsha Charitha' has conveniently not mentioned the defeat of Harsha in the hands of Pulikesi II it may be confirmd by various other sources.

The Seige of Kanchi

Pulikesi II ambitious to expand his kingdom, attacked the Pallavas. Many inconclusive battles were fought. In Sivagami Sabadham, Kalki mentions that 'Pulikesi' seiged the Kanchipuram fort for several months. However Pallavas,though not sufficiently prepared for the war were well prepared for the seige. After several months of wait, Pulikesi II retreads with his army. Chalukyas capture and annex several parts of the Pallavan empire. According to the book, the retreading army creates a huge ruckus and captures several women as prisoners including Sivagami, who is the muse of the crown prince Narasimhavarman. In the story, Sivagami who is an accomplished dancer feels insulted by the way the Chalukya King and his subjects treat her. She takes a vow that she will not leave Vatapi until Narasimhavarman comes and destroys the city.

Saivite Saint, Thirunavukkarasar was made to go through un speakable tortures with intention to kill him, such as being locked up in the chambers in which limestone is made for seven days, was given poison, thrown under a mad elephant and was also thrown into the sea with rocks tied to him. Everytime Thirunavukkarasar magically escaped. It is these miracles, that finally convinced Narasimhavarman of the divinity of Navakurrasar. These incidents were captured by thirunavakkarasar in his epic 'Devaram'. Mahendravarman apologised to Navakurrasar, gave up Jainism and embraced shaivism. It is said that he later executed the Jain monks in an extremely cruel way of splitting their body into two parts. Alternate accounts suggest that Jain monks put themselves through the cruel punishment.

Kalki portrayed Pulikeshi has ruthless and barbaric with no appreciation for fine arts. However, this portrayal of Chalukyas cannot be farther from the truth. The cave temples of Badami are the earliest dated Hindu caves predating even the Ellora caves. Cave 3 of 4 in Badami has been established to be built during the period of King Mangalesha. While Pulikesi was an ardent Vishnu devotee, the Badami caves covered the sects of Shaivite, Vaishnavite, Buddhism and Jainism. Another great heritage site of the buddhists, the Ajanta caves were also commissioned by the chalukyas.

'Sivagami Sabhadham' has several mentions of Ajanta, and the quest of Pallava's master sculptor to learn the art of making the permanent pigmentation used in the Ajanta Paintings from the chalukyas.

Chinese Buddhist Monk Xuanzang, also known as Huen-Tsang travelled in India for about 17 years. His aim was to collect the original transcripts of Buddhisim and understand Buddhism as it was followed in India, the country in which Buddha was born. He had visited both the Pallavas and Chalukyas. Xuanzang reported that Kanchipuram, the pallava capital had over 100 buddhist monasteries and 80 temples. He describes Kanchipuram as a glorious city and extolled the benign rule of the pallavas in the region.

Xuanzang visited Pulikesi II's court after Kanchipuram. Pulikesi had divided his provinces into three Maharashtrakas comprising of 99000 villages each. The 3 Maharashtrakas comprised of current day Maharasthra, Karnataka and coastal Konkan. It is possible that the modern name of Maharashtra is a derivative of the same. Xuanzang was impressed with the set up and extolled the administrative abilities of the King and extolled that the benefits of able administration were felt far and wide by the citizens.

According to Sivagami Sabadham, Mahendraverma Pallavan is fatally injured by Pulikeshi. The Pallava King felt deeply insulted by the raid of the enemy and kidnapping of his subjects. He takes a vow from Narasimhavarman to venge for this insult and to bring back Sivagami. Narasimhavarman tries to smuggle back Sivagami through his confidant, Paranjothi. However Sivagami refuses to escape and vows that she will only return once Narasimhavarman defeats and destroys the city of her captor - Vatapi.

Narasimhavarman consumed by the promise and vengeance builds a massive army for over a decade. He attacks vatapi and gets a massive victory in 13th year of his reign. Pulikesi dies in the battle. The victorious pallava army sets vatapi on fire and loots from the homes of the subjects. The army general of Pallavas and Narasimhavarman's confidante Paranjothi relinquishes his position and dedicates himself to the service of Lord Siva and his devotees. He is later known as 'siruthondar', one of the 63 nayanmars i.e the greatest devotees of Lord Siva. Pallavas insribe their victory in the rocks of badami in tamil. This rock is currently in display in the Badami Museum.

Palavas also stole the Ganesha statue from the Vatapi temple and brought it back with them. This statue is currently instilled in 'Tiruchenkattankudi' near Karaikal. This is probably the incident that led to the urban legend of 'the stolen ganesha being lucky', as Narasimhavarman then had a long and prosperous rule. The idol is made famous by the hymn of Muthusami Deekshetar, 'Vatapi Ganapati bhaje '.

All love is lost between the lovers. Narasimhavarman holds Sivagami responsible for the death and destruction of the city and for having wasted a decade of his life in the preparation of war. Sivagami returns to the palace as caretaker of the crown prince Mahendravarman II, son of Narasimhavarman and his queen and Pandian princess, Vanamadevi.

The thirteen years quest of Narasimhavarman for capturing Vatapi lasted only another 13 years. The Chalukya warriors did not take this to insult lightly. During their period, Chalukya generals who faced defeat in a war, were not executed but were publicly humiliated by asking them to wear women's clothes. So one can imagine how Chalukyas would have taken to this massive defeat in the hands of Pallavas. Vikramaditya, son of Pulikesi won Vatapi (Badami) from the hands of Pallavas. He also tirelessly went on campaigns against the pallavas and fought three pallava kings - Narasimhavarma, Mahendraverman II and Paramesvaravarman I. He manged to recapture number of territories from Pallavas and unite chalukyas to their former glory. But chalukyas felt nothing less than annihilation of Kanchipuram and destruction of entire Narasimhavraman clan would be a fitting revenge.

This grudge against the pallavas lasted for over a century and was finally fullfilled by Vikramaditya II. Vikramaditya II fought several battles and won three important victories. He occupied Kanchipuram during this period and left a victory inscription in Kannada in the mandapa of Kailasanatha temple in Kanchipuram. Unlike Narasimhavarman who destroyed Vatapi, Vikramaditya II was a very benevolent captor. He returned huge amounts of the booty and generously granted funds to the temples. He ensured the people were treated fairly and no local temples were demolished. His benevolence won over the local population. Vikramditya returned to his capital Vatapi having avenged and settled the century old grudge. Chalukya dynastry returned to its glorious years as it was in the time of his great grand father Pulikesi II.

Chalukyas: Love for the Architecture 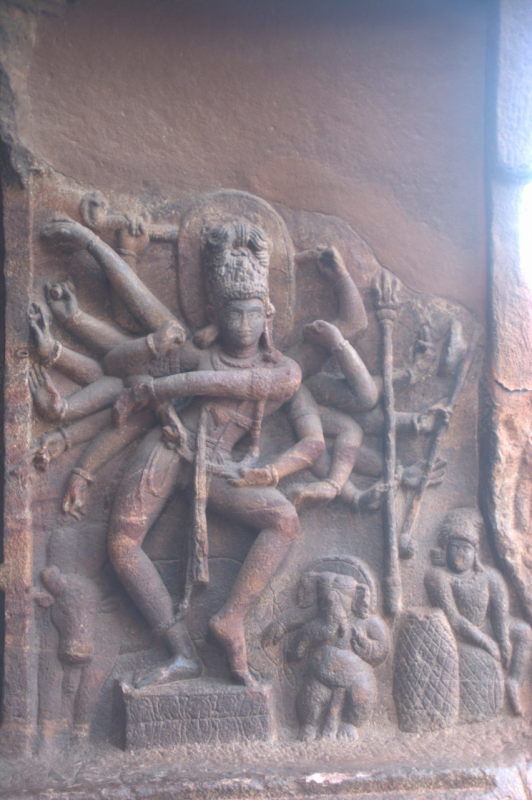 Chalukyas employed the pallava scultors in the creation of many beautiful temples in the chalukya towns of Aihole and Pattadakal. The three towns of Badami, Aihole and Pattadakal is the epitome of chalukya architecture. Temples in Pattadakal follow the dravidian archittecture (Mallikarjuna Temple) , northern nagara style (Kasi Viswanatha Temple) and also early attempts in the fusion of the two styles (Papanatha temple). 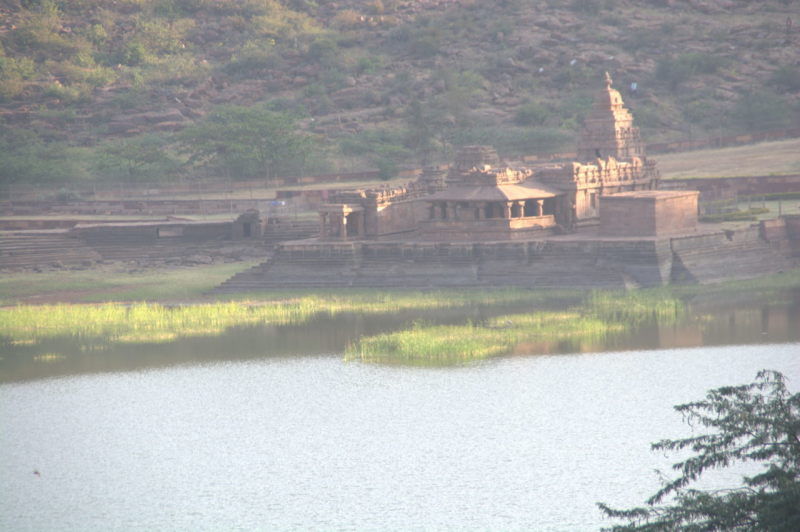 Western and Eastern Chalukyas had contributed majorly to Kannada and Telugu literature. The "three gems" of Kannada literature, Adikavi Pampa, Sri Ponna and Ranna belonged to this period. In the 11th century, Telugu literature was born under the patronage of the Eastern Chalukyas with Nannaya Bhatta as its first writer. Similar to Grantham script, where sanskrit was written using tamil letters, chalukyas also wrote sanskrit in old kannada script, known as hale kannada. Eastern chalukyas while initially tried to promote kannada literature, but later accepted and patronised the local language of telugu.

Govt. of Karnataka celebrates the Chalukya utsava, a three day festival of music and dance in commemoration to the great rule in the tricities of Badami, Aihole and Pattadakal.

Chalukyas won over my Prejudice

Six hundred years of Chalukya rule has played a tremendous role in shaping deccan the way it is today, As a Kalki fan, when I stood in Badami, I initially felt like I was standing in the lines of enemy. When walking around the Agastya lake and its huge banks around the Bhutanatha Temple, I could not help wonder if this was where Sivagami was made to dance against her will. But the more I explored the architectural marvel and the story of chalukyas, I could not help think, he too was a capable and loving king for his subjects. His glory is no less than the Pallavas. The story need not be seen from the eyes of one side only. Pulikesi rose as a Hero in my eyes too.