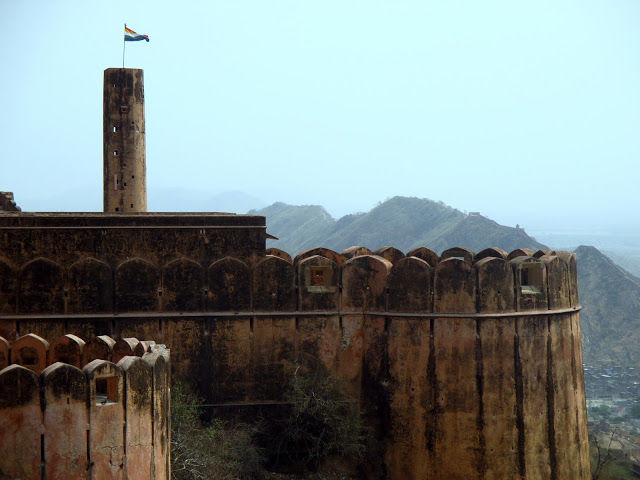 After visiting the Jal Mahal, we were proceeding to go to Jaigad fort, many on the way, elephants were coming back after being punished, who were returning after riding the tourists in Amber Fort. It was also sad to think and wondered how when it is difficult for humans to walk themselves in such a heat, how can these poor animals carry their load with so many people? The distance of this fort from the Jal Mahal is eleven kilometers. From here we proceeded to Jaigad Fort Road, where we reached a place from which the wonderful palaces of Pan Mahal and Kanak Valley were situated in the middle of Man Singh Lake.

After some time spent here we proceeded further towards the fort. From here the wall of the fort was built to protect the fort and the flag of India was seen. But the driver said that this is not a Tricolor flag but a five-color flag in your country. Under any circumstances, it was difficult to believe in this matter, then he said that after going near it only see it. He also told that this flag is used to show the presence in the palace of King of Jaipur. If the King is in Jaipur then two flags are planted and if not, then the flag is applied. Today, only one flag was visible, it meant that the King Sahib was not in the city.

Seeing the road here, it was not as if we were in Rajasthan, the path seemed like a mountain, because we were not on the direct road, but on the high low street. Dried trees were visible in the vicinity, and it looked as if there was a little green foliage after rainy days, there would be very attractive scenes. Although Haritima was not visible right now, it was also wrong to expect such a hope in the month of May, but whatever Brown's beauty was looking for was no less. Rajasthan, however, became famous for its brown sand. So far, we reached the gate of the fort and the driver here told us that if we take a ticket for the carriage of the car with our ticket and the ticket of the camera, then the carriage will go up to the top. Taking all the tickets, we once again reached the peak of the fort sitting in a car, where a famous cannon was placed. That is why this fort is also called Canon Fort. From this place the Panchangari flag was clearly visible. Now, we started doing the tableau with the windows on the top of the fort. Earlier, I had seen the Fort of Benakal Fort in Mangalore and the Golconda fort of Hyderabad, both of them have a clear impression of the Muslim rulers. Because the fort of Jaigad was made by the Rajputs, it seems very different from these two forts. Its walls are mainly painted in gray or pink color and on these walls there are many window windows that are now used to see outside scenes, in the olden times, news of the arrival of any outsider can be kept by them.