Around Puri and Konark

Kalinga style of architectural form of Odisha found its supreme expression in the form of temples, some of which are among, finest in the country. Of these, three most famous temples are the Lingaraja temple at Bhubaneswar (11th century), the Jagannath Temple at Puri (12th century) and the great Sun Temple at Konark (13th century). 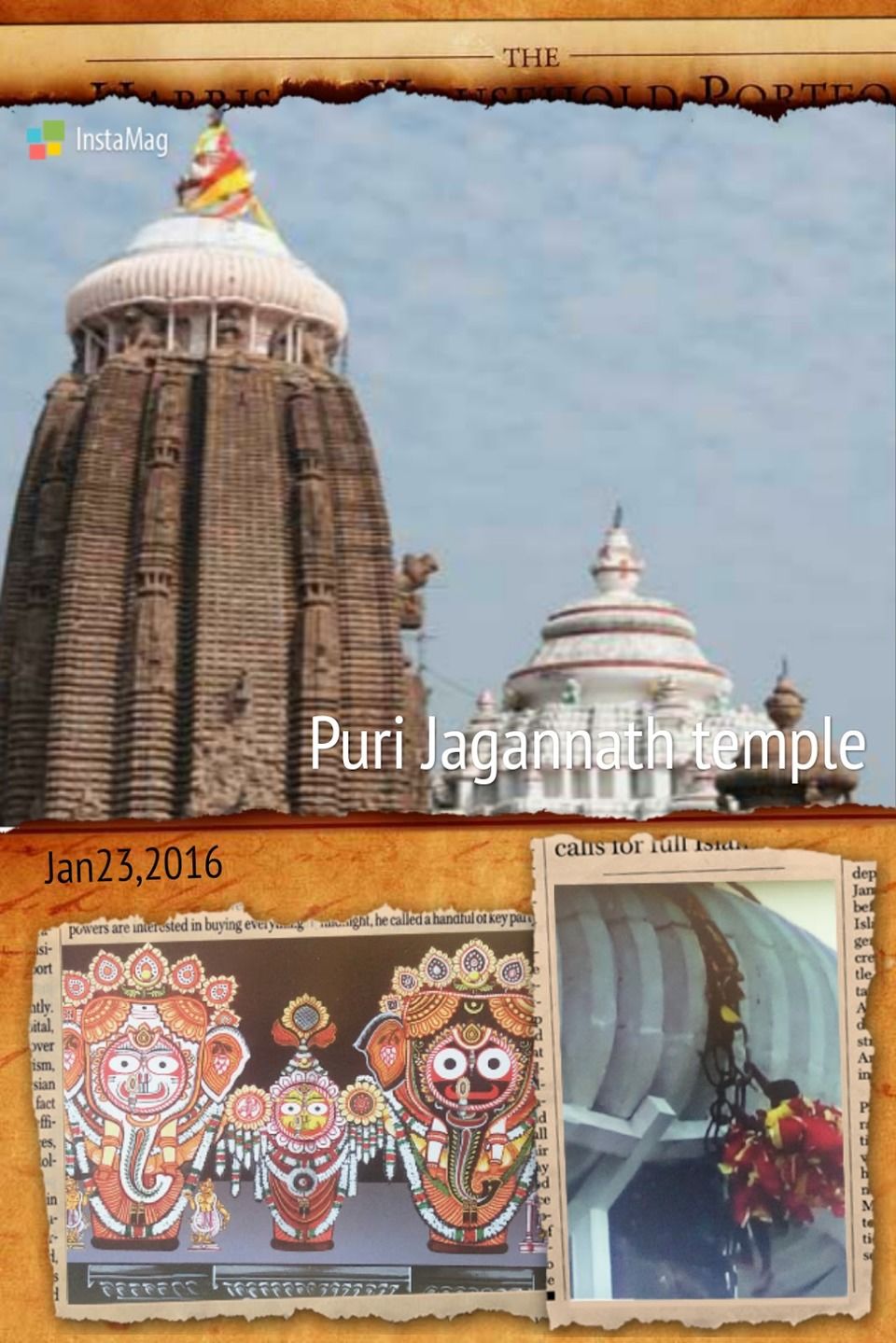 Jagannath Temple in Puri, Odisha is one of four dhams for Hindu pilgrimage. Known as the White Pagoda,this temple enshrines deities of Krishna, Subhadra and Balarama. One need to take a special ticket from counter for entering inside .The temple has 4 gates, facing the 4 directions. On the east-facing gate, there are stone images of 2 lions and it is called the Lion Gate. The north, south and west facing gates are called the Elephant Gate, Horse Gate and the Tiger Gate respectively. As we arrive at the vast open area in front of the Lion Gate, we see a ten meter tall monolithic pillar known as Aruna Stambha, this pillar was removed from Konark when the temple was forsaken and fixed in front of Jagannath temple. Immediately after we get into the main gate and go forward, we find a flight of steps. They are locally called Baisi Pahaca, literally meaning, 22 steps. At the end of the stairs, we have to cross another gate that enters a second compound wall and then we have to turn left to go towards the Ganesh temple. There are attractive carvings on the sides of this entrance of the inner compound wall. 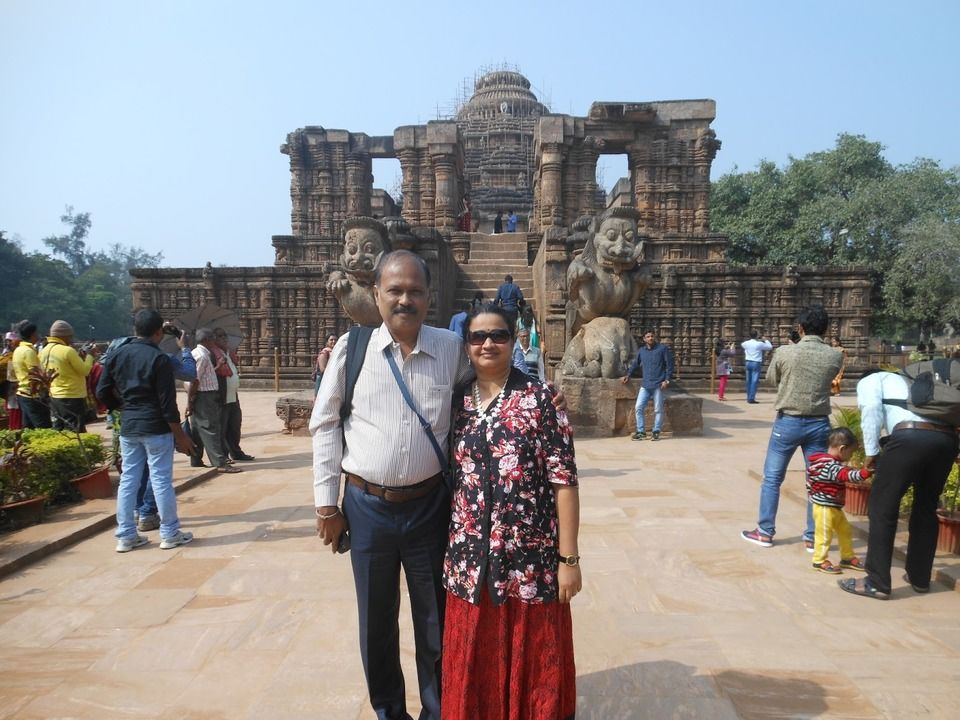 We had a quick darshan of the deities inside the temple in the evening at about 4.30pm without any disturbance from any Pandas, in fact one of the Panda bought dry Prasadm for Rs 200. Here devotees can go behind the idols(go round the idols)during the Sahana Mela .

There are 3 main shrines inside the premises (i) Vimala temple (ii) Ganesh temple at the foot of the Kalpavata (a very old banyan tree) and (iii) Lakshmi temple. The Vimala Temple (Bimala Temple) is considered one of the most important of the Shaktipeeths where the Goddess Sati's feet fell. It is located near Rohini Kund in the temple complex. Outside the Girbhagriha, pilgrims were waiting to see the Flag changing ritual by the priest , we too waited for half hour. Our driver (also our Guide) told us a panda climbs up the sheer face of the temple and bring down the old flags and put up the new ones is a sight to be witnessed.Later we came to know that the Dwaja Parivartna ceremony was over when we were inside the temple. We were out within a hour feeling enchanted to see Lord Jagannath. That night we stayed in a Hotel located near to Puri Beach.

The drive between Bhubaneswar and Konark is lovely with good roads and country side. It takes about an hour to reach Konark from Bhubaneswar. Standing in front of this magnificent was a dream come true,we immediately engaged a guide to know everything about the temple

The Sun temple of Konark widely known for its fine harmony of design and architecture, its name is a clubbing of Kona (corner) and Arka (Sun), meaning the corner of the Sun.Ancient Sailors had named it as " Black Pagoda" because of its dark color ,but was dubbed as the cause of ship wrecks that occurred along the coast.There are many speculations regarding the fall of the temple. It is said that a massive magnet placed at the temple top had created an architectural marvel of Lord Surya's idol to float in air .The sailors took away the magnet which was integral part of the temple thus disturbing the stability of the structure. Other reason held for destruction is earthquake

Guide narrated this legend as to " Why the Sun God does not get worshipped in the epic temple built for him" .The story goes back to 13th century A.D. , when 1200 WORKERS worked for 12 years to build the KONARK TEMPLE spread across 12 acre on the command of the King Narasimhadeva-1 of the Eastern Ganga Dynasty. The chief architect Bisu Maharana had a deadline to finish the temple in 12 years, finally failed to host the crown stone His son Dharmpada a 12 years boy whom he never saw since birth because he was busy with temple work visited the spot to see Dad's achievement,overhears the conversation of craftsmen , that they will be beheaded in case they fail to meet the deadline. Right from his childhood Dharmapada was interested in architecture and mastered all the manuscripts regarding temple construction. The small boy suggests a solution ,by midnight the kalash stone is rolled to the top of the Gopura. Dharmapada hears whispers that king will still not be kind with his father and other hardworking craftsmen,next day at sunrise ,he jumps off the the Temple top into the blue sea waters.

Main attractions of the temple :

1. Natya Mandir is the first part of the temple.Every inch of the mandapa is filled with sculptures of women - dancing, singing, playing instruments, dressing up. 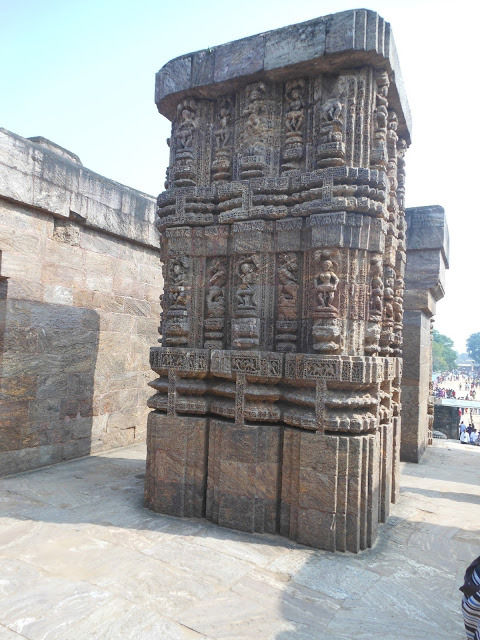 2. The Konark Sun Temple takes the form of a huge chariot for the sun god Surya, with 12 pairs of stone-carved wheels and a team of seven galloping horses (only one of which survives intact). 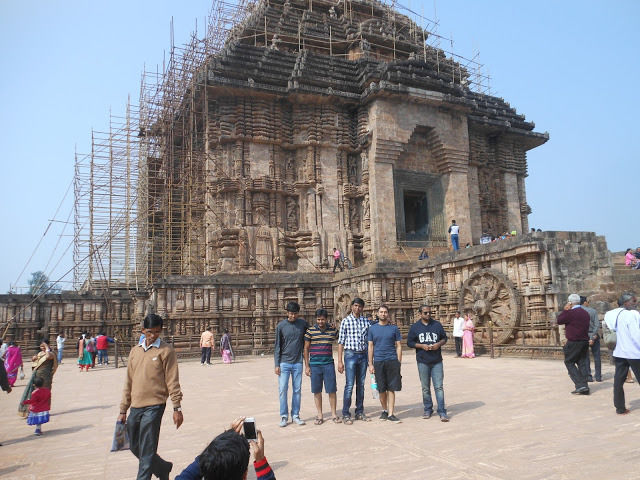 3. The wheels have 8 spokes that symbolize the eight ideal stages of a woman's day. One can analyze the exact time of the day by just looking at the shade cast by these spokes. 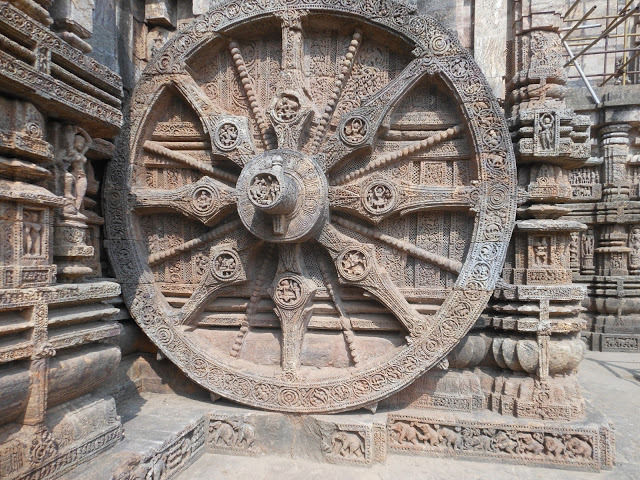 4. The entrance is guarded by 2 huge lions ,Each lion is crushing an elephant. Beneath every elephant lies the human body. Lion represents pride and elephant represents money. Problems faced by human beings shown in one shot. 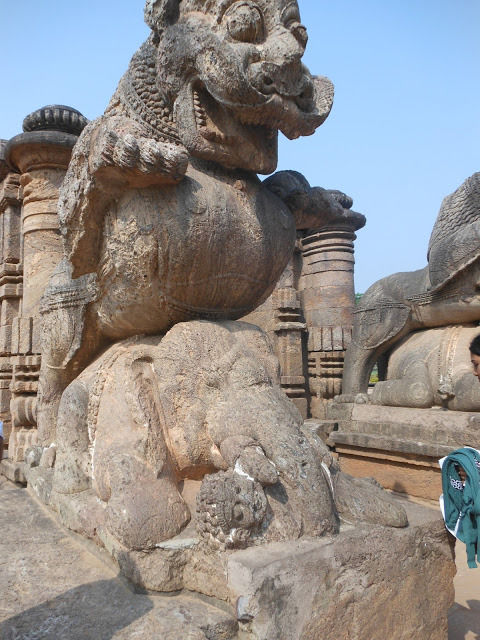 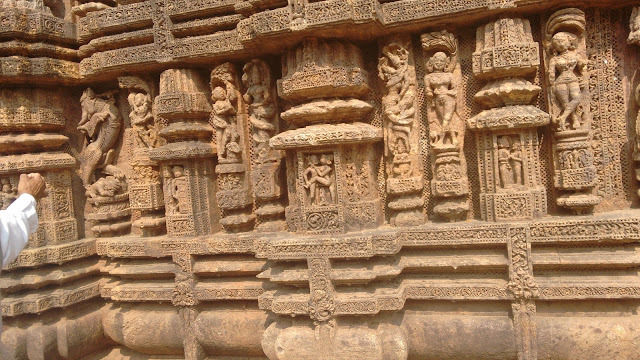 7. There are three images of the Sun God, positioned to catch the rays of the sun at dawn, noon and sunset. 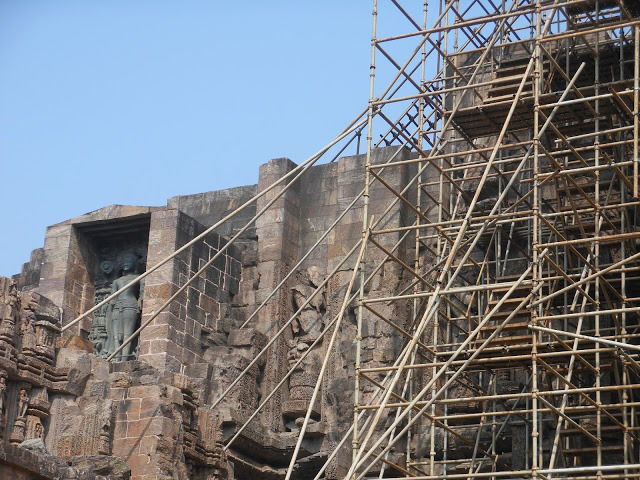 The temple is a UNESCO World heritage site ,restoration work is going on. 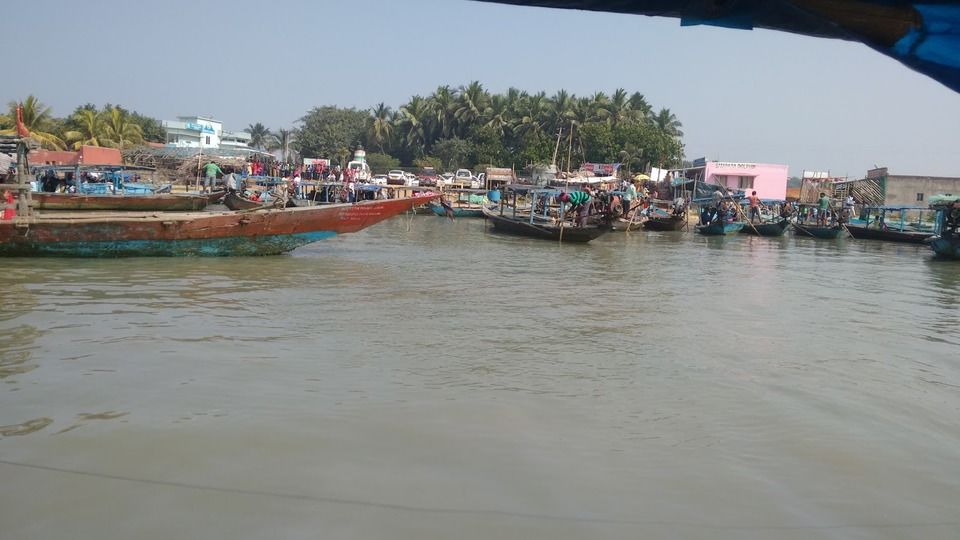 Chilika is a very beautiful lagoon about 2 hours drive from Bhubhaneshwar. At the boat boarding point, there is parking facility and one has to hire a boat. We took the 3 hour speed boat ride for Rs 2000, ordered food in the restaurant(quite expensive). Now I feel the fares are steep and manipulated by the boat owners. One can enjoy the calm nature and cool breeze and I advise one should carry drinking water and biscuits and cover the kids . 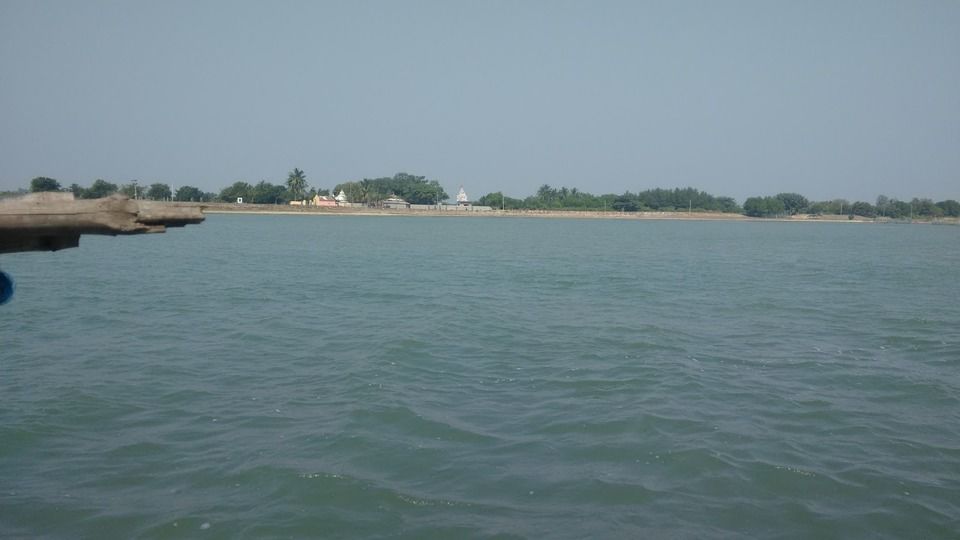 Dolphins and few birds can be spotted on the way to the island. After an hour or so we reached an island,we called our son, BSNL Telecom signals were very clear. Fishermen approach with sea shells claiming that they carry pearls, gems etc, should not buy them. Return journey seemed to be long because of the headache I got, could not eat anything from the restaurant, our driver sensed it as a gastric problem purchased tablets for me. Within a hour I was fit for Puri Jaganath Darshan