ODISHA-V: Bhitarkanika: The Swamp lands of our Unconscious mind 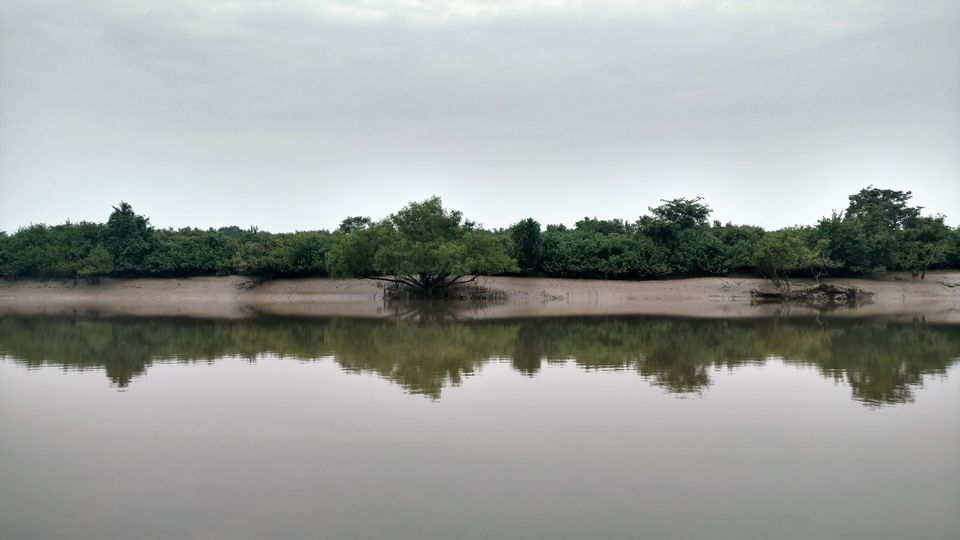 The swamp lands, are ancient, as ancient as the rivers which birthed them; as ancient as the universal unconscious of the human race. The ever flowing rivers bringing silt of thousands of years, like the thoughts carried by the ever restless human minds. Where do these thoughts go ? Do they pile up in our unconscious, layers upon layers: warm and moist, fermenting and putrefying, yet at the same time, churning out nutrients to create new life. In these swamp lands of our unconscious the seeds of new thoughts sprout . The cycle goes on and on and soon an entire forest of mangroves is formed like the universal archetypes rooted in the silt of our racial memory.

Silt deposited over hundreds of years by the rivers of Brahmani, Baitarni, Dhamra, Pathsala along the Odisha coast has given rise to extensive mudflats - a rich cocktail of silt, moisture, salt and nutrients creating mangrove forests, the second largest in the world. These are the swamp forests of Bhitarkanika, where narrow channels of backwaters penetrate deep inland carrying muddy salt waters which at places gurgle like a mountain stream, an illusion of the imaginative mind.

At low tide, when the waking mind sleeps, the water recedes to reveal the muck and the dirt of suppressed desires - a muddy womb where nutrients are released by dead and decaying plants and animals.

A fertile ground for new life and new desires to breed. From the first sprouts of salt loving plants to numerous crabs and cat fish, to the mighty eighteen footer crocodile.

Walk through these forests of the unconscious alone and you will feel the primeval pulse of the land: hidden among groves of old gnarled trees are pagan shrines: the first archetypes of ancient humans, who could commune with the Earth spirits.

There might be an old Kali temple whose roots lie in the old fertility cults of Mother Earth and the creative feminine energy. Ancient devalayas dedicated to the Dark Lord, Pashupati- the Lord of all life, ethereal and supernatural. An attempt to resuscitate divine vibrations in the ruins of a shrine with vermilion laden rituals.

You might even come across a fairy- serpent pond, shining with a green venomous glow. This is where our dark fantasies breed and are nurtured.

There are ponds dark and opaque and others as clear as light reflecting the canopies above.

Paths that lead you to the ruins of your long forgotten desires and paths that keep on going for ever.

Along the swamps edge you might come across a troop of monkeys - our thought forms, nibbling on the mire of our lust and greed.

And on and on it goes, spiraling forever like a spider's web - a shinning glossy illusion of Maya, waiting to ensnare you.

But all is not dark and deary in the human unconscious. There are beings of flight along the edges of the swamp, or on tree tops. Waiting for a glimmer of sunlight so that they can dry their wings and take to flight.

It is home to a diversity of plant, animal and bird life.

Ideally you should check in by night fall and go for the field trips (in boats) the following morning.

Depending on season and weather, you will definitely see crocodiles and heronries, and if you are silent and lucky you might spot chital, wild boar, aquatic lizard and many more inhabitants, and of course, lots and lots of birds.

Pick a sunny day to venture in the boats, that is when the crocodiles and the aquatic birds come out to sun-bathe.

Ask the boatman to take you two three main points: the watch tower, the hunting tower and crocodile museum. Be prepared to walk long distances if you wish to see the rich diversity of life here. Wear gum boots and carry drinking water. Please do not litter.

The forest guest houses are reasonably good, pick the one inside the National Park. Do not stay in the ones labelled 'Researcher Hostels'

If you are seriously into nature and wildlife, then I would suggest that you spend at least 2-3 days in this enchanted place.