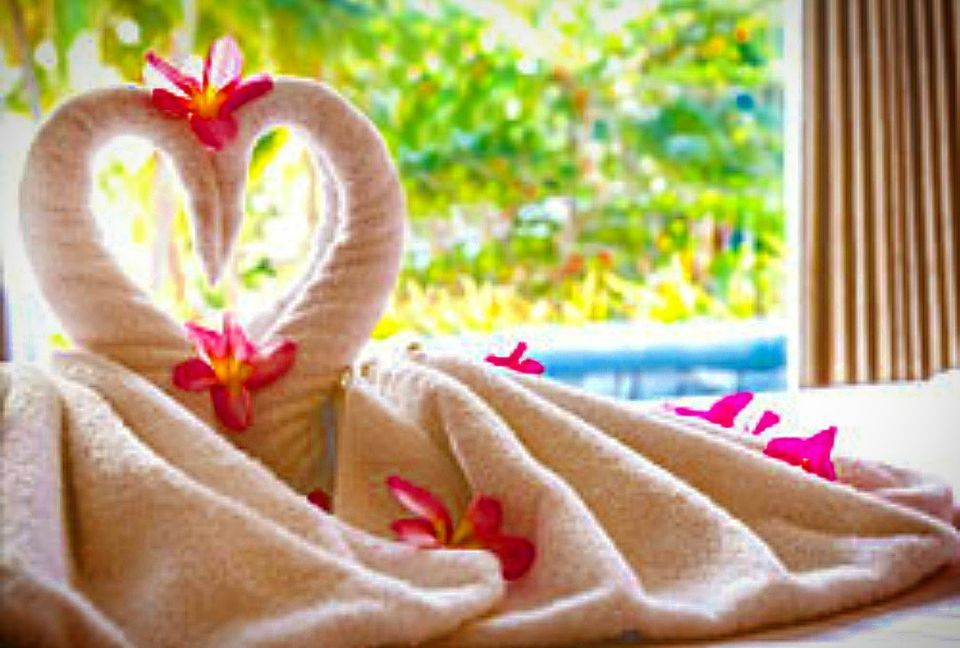 Alleppey backwaters. The romantic weather and beautiful landscape of this place will perfectly compliment your celebratory mood.

The Alleppey Railway Station lies within the city limits and is well connected by rail to Cochin and Trivandrum. From the railway station, one can board a bus, hire a taxi or get in an auto-rickshaw to reach the main city.

* Explore the local village and markets

* Splurge on the sea food 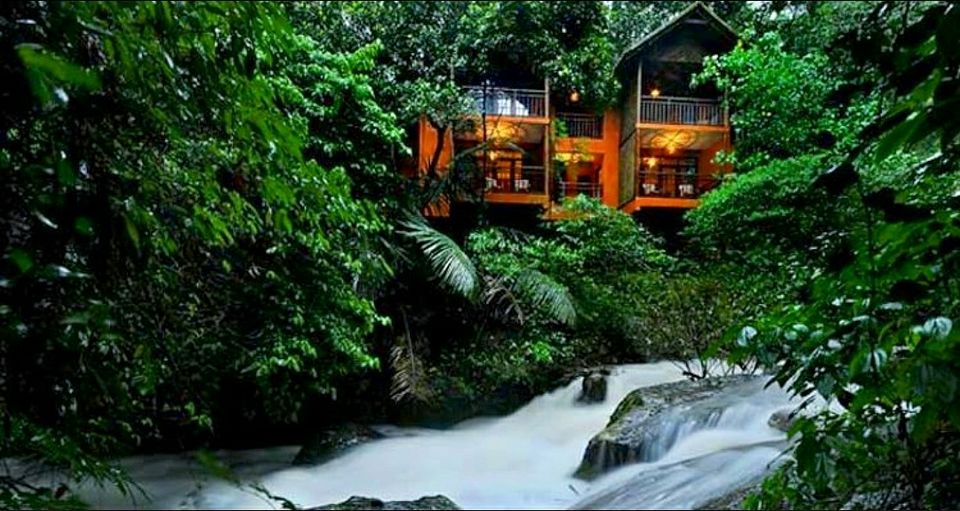 Located in Karnataka, Coorg is also known as the Scotland of India. With alluring mountains and the aromatic smell of coffee, the region is beautiful and captivating. Couple looking for making Sweet memories, and want to enjoy the monsoon dancing in the rain, Coorg is your destination. Tourist here mostly come for some nature time and relaxation. With its misty landscape and the an addictive greenery it has everything you need for a perfect honeymoon.

The nearest railway station is in Mysore, which is about 95 kilometres away.

If you want to take the bus, there are K.S.R.T.C deluxe buses, which run daily from Bengaluru, Mysore and Mangalore. 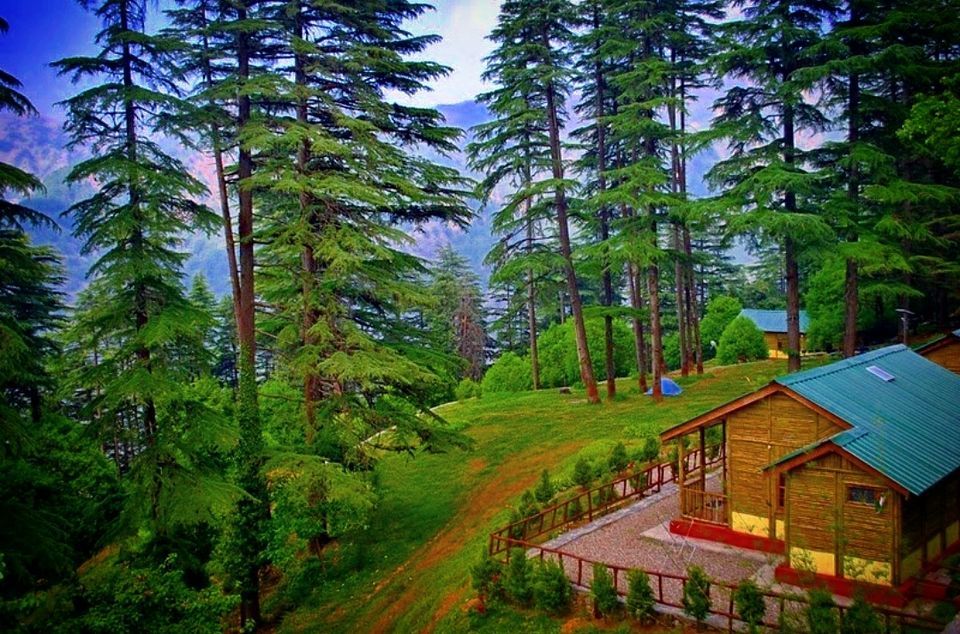 Dhanaulti, beautifully nestled amid the lofty Himalayan peaks, is a hill station 24 km (15 mi) from the popular hill station of Mussoorie, and 31 km (19 mi) from Chamba, as it is situated between the two. Couple looking for leisure, privacy, solitude and peace should pack their bags anytime soon now. Being close to nature and away from the city hustle-bustle, Dhanaulti offers a range of serene places for sightseeing and absolute relaxation.

* Walk among the deodar trees 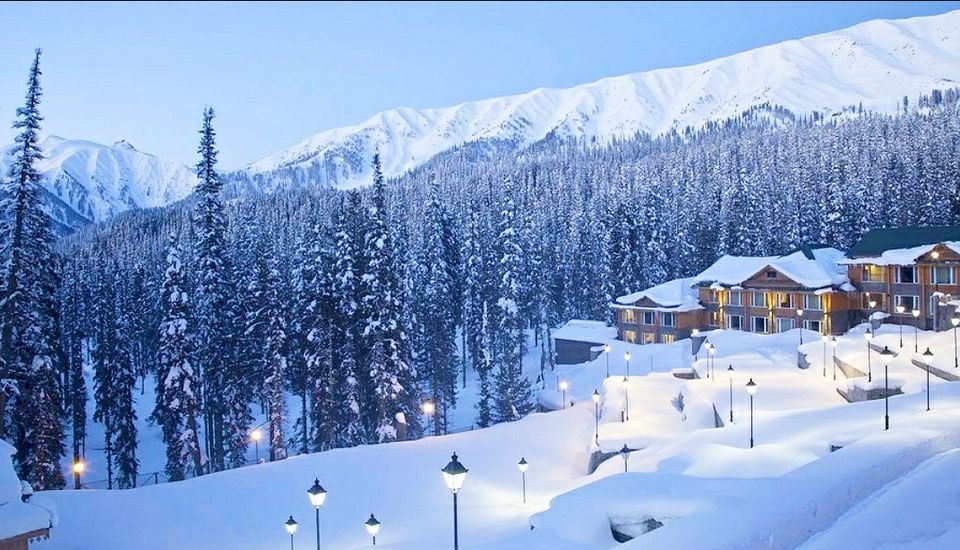 Gulmarg is a town, a hill station, a popular skiing destination and a notified area committee in the Baramula district of the Indian state of Jammu and Kashmir. The town is situated in the Pirpanjal range in the western Himalayas. With surroundings graced by pine trees, lush meadows and towering snow-capped mountains, Sprawling landscapes, panoramic views and more - Gulmarg is pure magic!

The nearest airport to Gulmarg is in Srinagar which is 56 kilometres away. It is a domestic airport and is well connected to major cities in India by regular flights from Delhi, Mumbai and Amritsar. Outside the airport, you can hire a prepaid cab which will cost you around Rs. 1500 one-way. You can also hire a shared taxi which will cost less.

Jammu is the nearest railway station, at a distance of 290 kilometres. Jammu railway station is well connected to the most of the railheads in major Indian cities. Some of the popular trains are Jammu Rajdhani, Himgiri Express, Swarak Express, Andaman Express and Himsagar Express which connects the farthest railhead in Trivandrum city.

Gulmarg is well-connected with regular bus services from Srinagar, Sonmarg and other neighbouring towns in Kashmir. You can choose from regular, deluxe and luxury buses operated by both government and private companies. 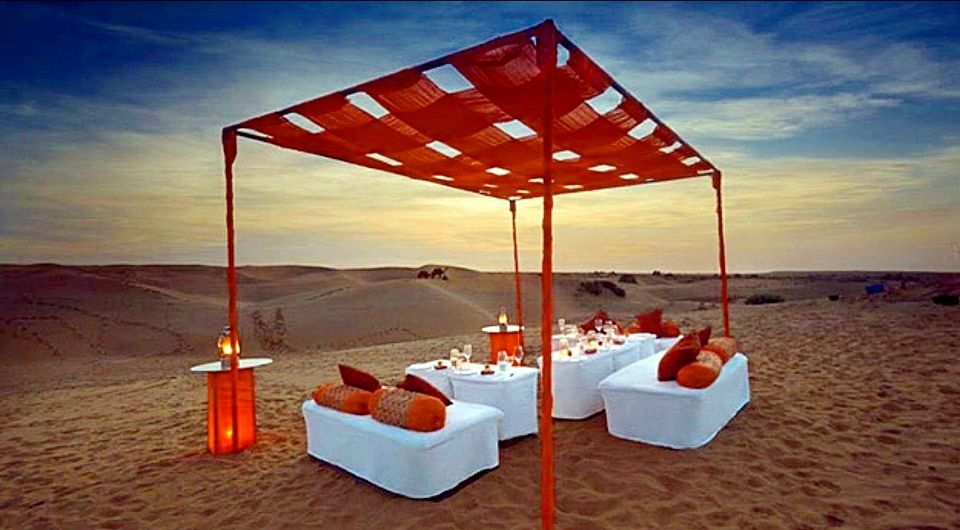 Jaisalmer is a former medieval trading center and a princely state in the western Indian state of Rajasthan, in the heart of the Thar Desert. Known as the "Golden City," it's distinguished by its yellow sandstone architecture. Raising from the heart of the Thar Desert, like a golden mirage, is the magical city of Jaisalmer. A commanding fort etched in yellow sandstone, stands with its entire awesome splendor, dominating the amber - hued city. With the crenellated golden sandstone town walls and narrow, streets, lined with exquisitely carved buildings, through which camel carts trundle leisurely, it has an extraordinarily medieval feel and an incredible atmosphere.

Jaisalmer Airport is a military airport and supports only chartered flights, hence is sparingly used by travellers. Although air travel is generally not considered an ideal mode of transport for travelling to Jaisalmer, some people do travel by air to save on time.

Jodhpur Airport is the closest domestic airport that is functional throughout the year. Major cities like Delhi, Mumbai, Chennai, Kolkata and Udaipur have regular flights to Jodhpur. The airport is approximately 5 to 6 hours’ drive from the city. You can either hire a prepaid or a private taxi from the Airport to reach Jaisalmer.

Once you reach the station, there are many auto-rickshaws and private taxis standing outside the station that will take you to the city on a nominal fare.

There are no direct buses from Delhi to Jaisalmer as the 17-18 hour drive is too time-consuming and quite exhausting. You can however switch buses in Jaipur from where a state-run sleeper coach operates regularly. Be sure to book tickets in advance as there are limited seats. Some sleeper buses are also available from Jodhpur and Udaipur.

* Explore the rich history of the place 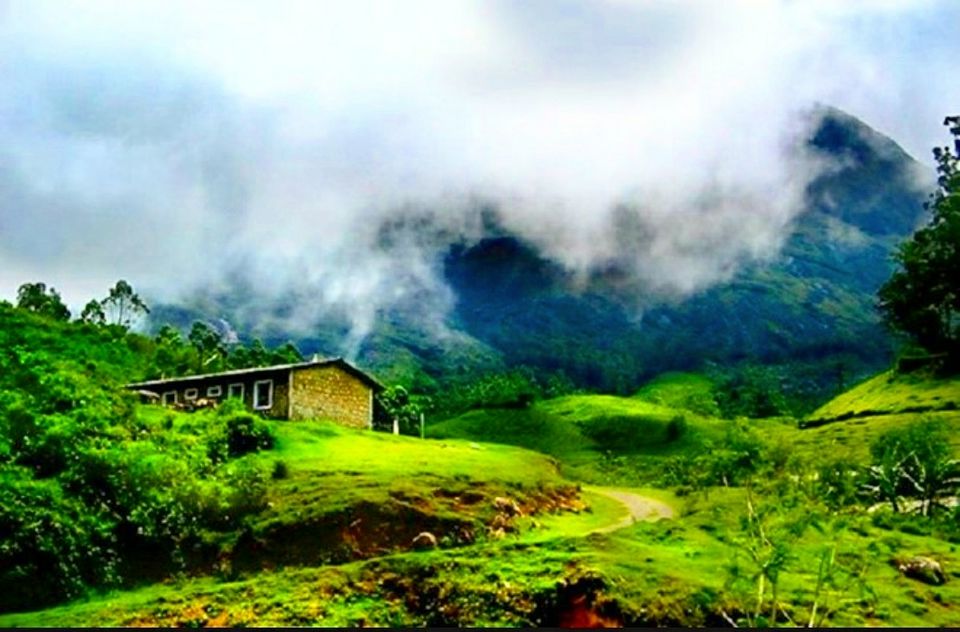 Matheran is a hill station and a municipal council in the Raigad district in the Indian state of Maharashtra. It is a hill station in Karjat Tahsil and is also the smallest hill station in India. Matheran is all about the views. Easily accessible via scenic rail from Mumbai, this refuge in the Sahyadri Hills is blissfully free of motor vehicles and affords nearly three dozen lookouts over the Western Ghats and the region's village-dotted plains.

Matheran can be reached via Mumbai-Pune Highway and Karjat. State transport buses from Mumbai, Pune and Panvel run regularly to Matheran. Buses can be availed till Neral. From there toy train is available to Matheran. One can also travel by cab from Mumbai and Pune. Remember that no vehicles are allowed inside the town. So, Matheran has to explored by walking or by horses.

ADVISED STAY - The Verandah in the Forest 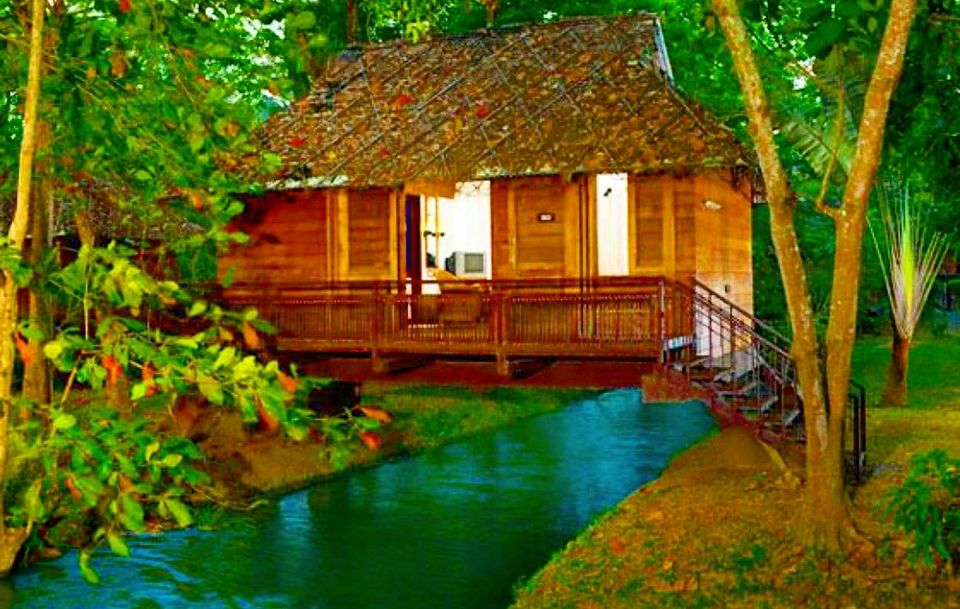 Munnar is a town in the Western Ghats mountain range in India’s Kerala state. A hill station and former resort for the British Raj elite, it's surrounded by rolling hills dotted with tea plantations established in the late 19th century.

It has to its credit the pristine valleys and mountains- exotic species of flora and fauna in its wild sanctuaries and forests - aroma of spice scented cool air - yes! Munnar has all these and more. It's the place you would love to visit - it's the place you would wish never to leave, breathtakingly beautiful, a heaven of peace and tranquility in God's own country.

State-run or private buses, plying from various towns in Kerala and Tamil Nadu, are the best way to get to Munnar by road. Kerala State Road Transport Corporation provides bus services to Munnar from all major cities in Kerala.

* Spend one night in the tree house

* Learn the art of tea making 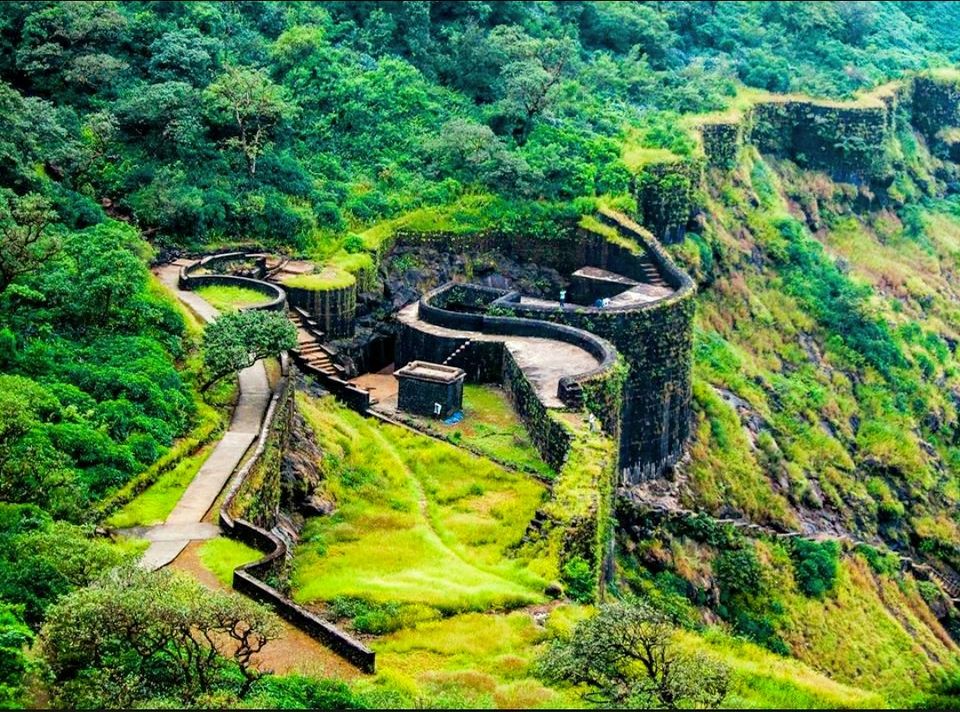 Khandala is a hill station in the Western Ghats in the state of Maharashtra, India, about 3 kilometres from Lonavala and 7 kilometres from Karjat. Famous for its beautiful hills, deep green valleys, huge lakes, historic forts and waterfalls, Khandala have magnificent heart catching view during monsoon. This hill station is also known as the 'Jewel of Sahydri', because of its nature's gifted of beautiful valleys, hills, milky waterfalls, lush greenery, and pleasant cool winds.

Since Lonavala is midway between Mumbai and Pune, all trains plying between the two cities would also cross Lonavala leaving you with multiple options. Some of the trains going on this route include the Intercity Express, Koyna Express, Deccan Express and Indrayani Express amongst others. Most of the express trains that cross the Mumbai-Pune railway line also stop at the Lonavala Railway Station. It takes roughly three hours to reach Lonavala from Mumbai and about one hour from Pune by train. 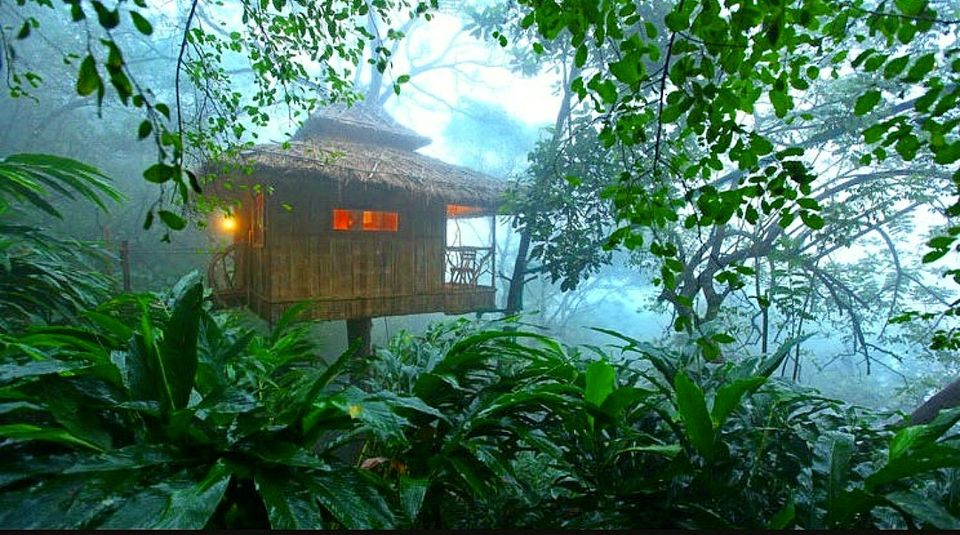 Ooty, also known as Udhagamandalam, is a hill station in the state of Tamil Nadu, in southern India. Surrounded by trees, central Ooty Lake is a huge artificial expanse of water with pleasure boats. ‘The blue mountains’ are the major responsible factor for this town’s popularity. The blue misty haze off the eucalyptus trees that cover the area are considered the reason behind its name, many different possible sources may exist however.

Approximately 88 kilometres away, Coimbatore is the nearest domestic airport from Ooty which is well-connected with most of the Indian cities. You can also take a flight from Bangalore (which is 295 kilometres from Ooty) as Bangalore airport is connected with most of the cities across the globe. There are regular flights from Delhi, Mumbai and Chennai connecting Bangalore and Coimbatore. Once you reach the airport, you can take a taxi or bus from there to reach Ooty.

The nearest railhead is Mettupalyam, 40 kilometres from Ooty. There are trains from Chennai, Coimbatore, Mysore and Bangalore connecting Mettupalyam. Some of the popular trains are Ooty Udagamandalam Passenger train, Mettupalyam Udagamandalam Passenger train, Mangalore Mail and Mangalore Express. From here on, you can also board the heritage train known as the Nilgiri Mountain train which takes you uphill on an exciting journey. However, if you wish to reach faster, take a taxi from the railway junction.

Ooty is a major tourist attraction of South India. You will get both government and luxury buses from Bangalore, Mysore and Chennai to Ooty. These are overnight buses and the journey is quite comfortable. Note that a special government bus leaves daily at 5pm and 7pm from Kolkata and it takes just 6 hours to reach Ooty.

* Splurge on the bamboo chicken 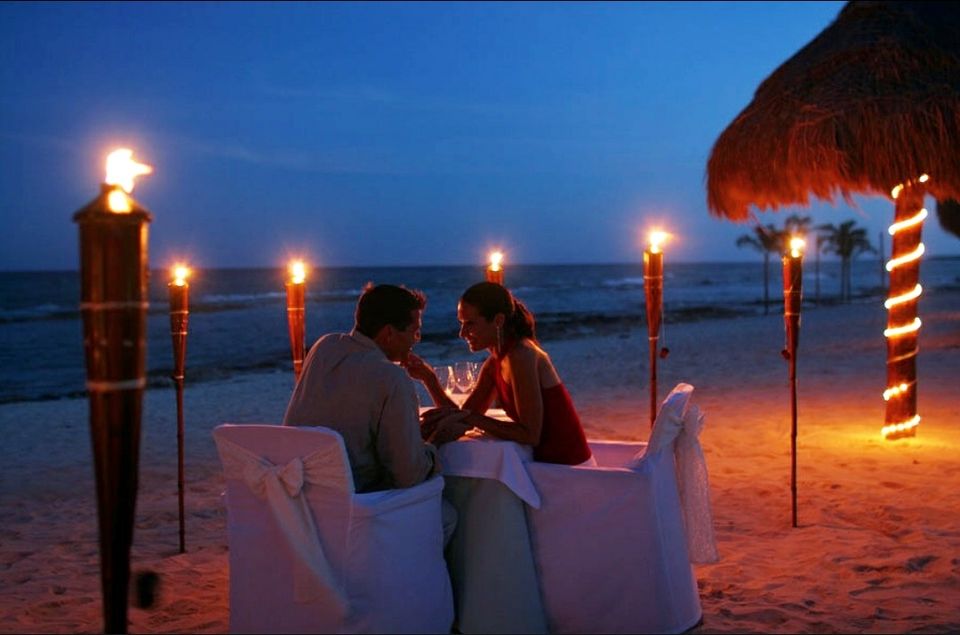 Udaipur, formerly the capital of the Mewar Kingdom, is a city in the western Indian state of Rajasthan. Founded by Maharana Udai Singh II in 1559, it’s set around a series of artificial lakes and is known for its lavish royal residences. Often referred to as the 'Venice of the East', the lake city of Udaipur is known as the centre for performing arts and crafts. Beside shimmering Lake Pichola, with the ochre and purple ridges of the wooded Aravalli Hills stretching away in every direction, Udaipur has for you a perfect royal way of celebrating love.

The nearest airport in Udaipur is called the Maharana Pratap Airport which is situated about 20 kilometres away from the city center. It is well-connected by air to all major cities in India including Delhi, Mumbai, Kolkata and Jaipur. Some of the popular airlines that have daily flights to and from Udaipur are Jet Airways, Indian Airlines, Air Deccan, and Kingfisher Airlines.

Once you reach at the airport, you can hire cabs or book pre-paid taxis that are easily available for travelling between the airport and the city.

Udaipur lies on a vast network of rail that connects it to major cities in India such as Jaipur, Delhi, Kolkata, Indore, Mumbai and Kota. Some of the popular trains that run daily are Mewar Express, Gwalior-Udaipur Express, Bandra-Udaipur SF Express, Chetak Express and Annanya Expres. In fact, the famous and luxurious Palace of Wheels also makes a scheduled stop in Udaipur.

Once you reach the station, you can hire a taxi or an auto-rickshaw depending on where do you want to get down in the city. The fare will depend on the number of kilometers covered.

There is a very well-established bus service network to Udaipur, linking it to several cities like Delhi, Jaipur, Indore, Kota and Ahmedabad, among others. There are a number of options when it comes to travelling by bus. These include deluxe buses, air-conditioned coaches and State-run transport.

COME FALL IN LOVE WITH INDIA !