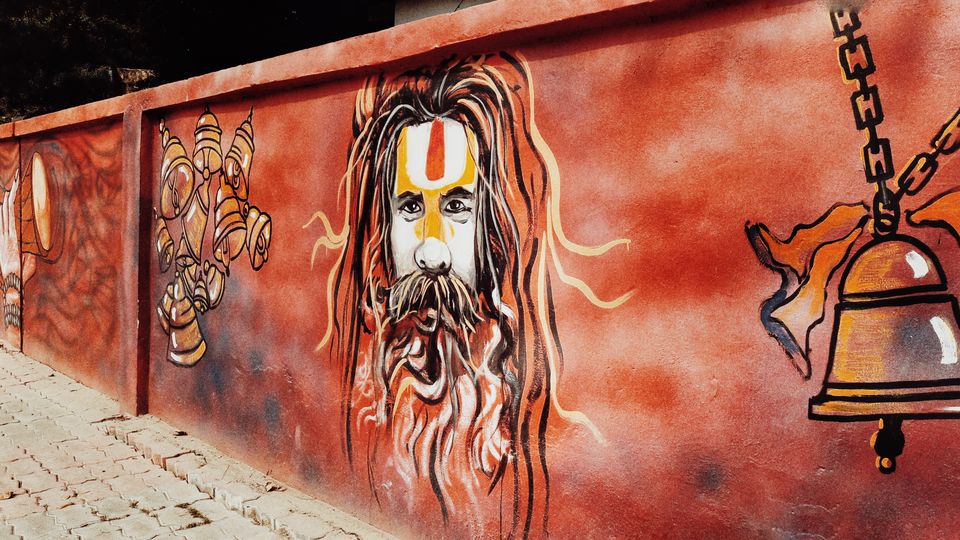 I am so grateful to witness the massive pilgrimage of faith - Kumbh, gathering of millions of pilgrims from different parts of the world with one common spiritual belief.

India has a diverse culture, comprising of different origins, thousands of languages and so much more, influenced by a history that is several millennia old. Hindu Dharma (religion) revolves around one major aspect - Sanatan meaning eternal or endless.

Distance between Delhi and Allahabad is around 700 kms. You can travel by Air, Rail or roadways whichever suits you best. There are a variety of trains available from Delhi. From Chandigarh you have two trains for Allahabad - Kalka Mail and Unchahar Express.

I live by Chandigarh, and i booked my train (Kalka Mail) tickets through E- IRCTC ticketing system. Our departure was at 1 am from Chandigarh, this is my longest journey by train so far. I was so excited as i have not experienced anything similar before. The duration of journey was around 16 hours. I spent leisure time capturing landscapes and people at stations along with a cup of Chai in my other hand. 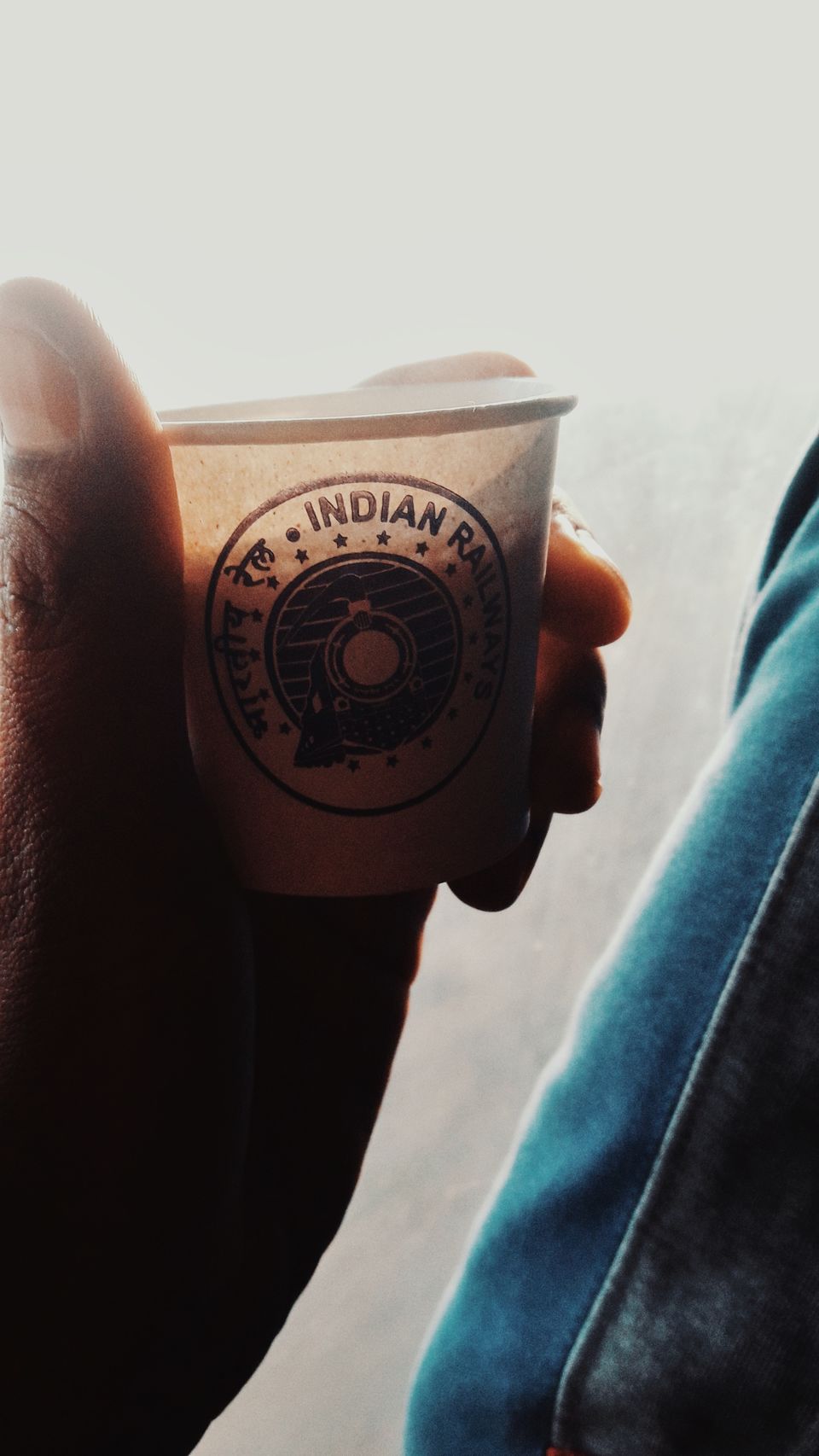 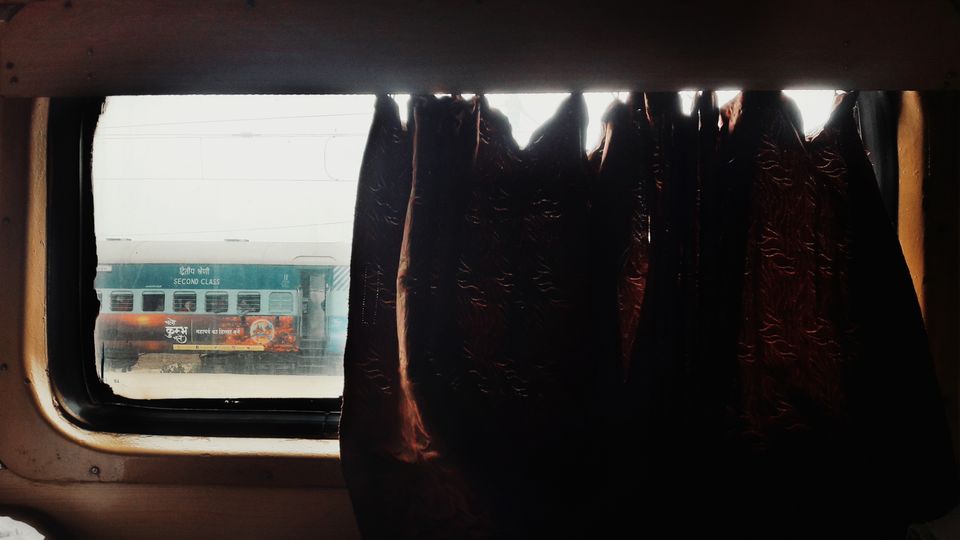 Such Landscape view from window 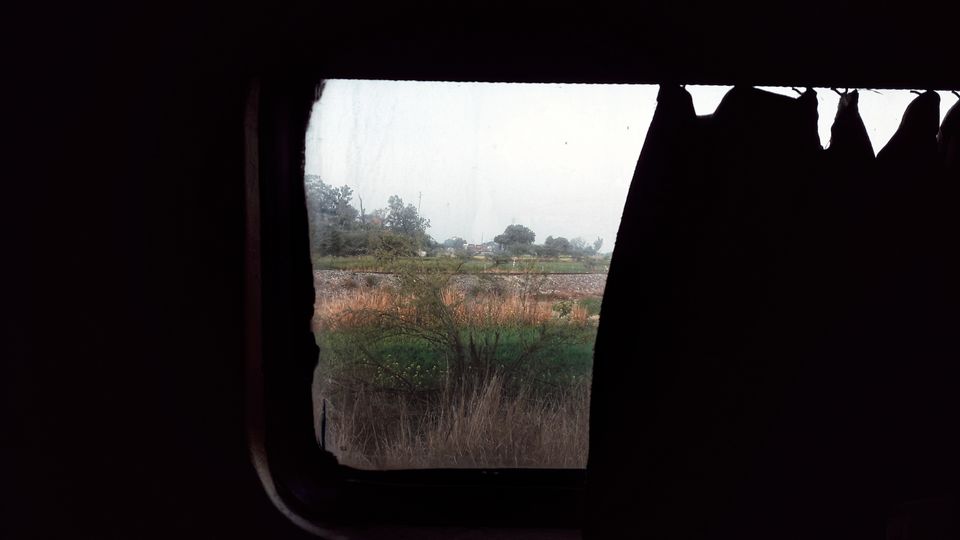 After journey of 16 hours, we reached Allahabad Junction by evening. Then we were headed to main area of Prayagraj. While walking through streets of Prayagraj, we witnessed beautiful wall arts all around. The whole city was so clean and well maintained, with least waste. I hope that day is not so far when we will witness whole India like that, clean and beautiful. And to make that happen, we don not need any miracle yet just your own contribution towards our country. While walking on streets of prayagraj, we had chai with some snacks at a tea stall on our way. My Kumbh partners were my dad and one his friend's along with Shiva obviously. 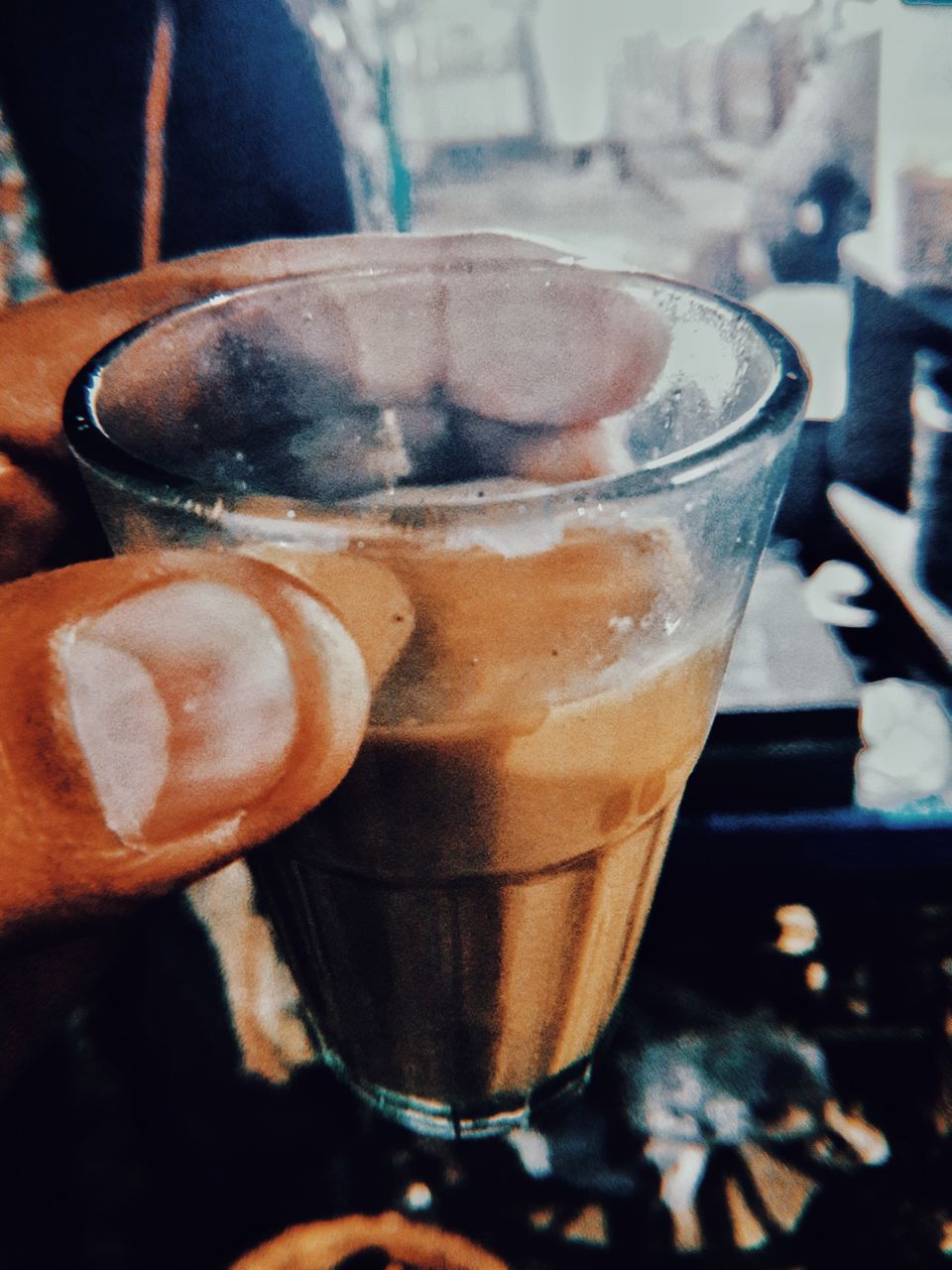 Artist painting over walls of prayagraj 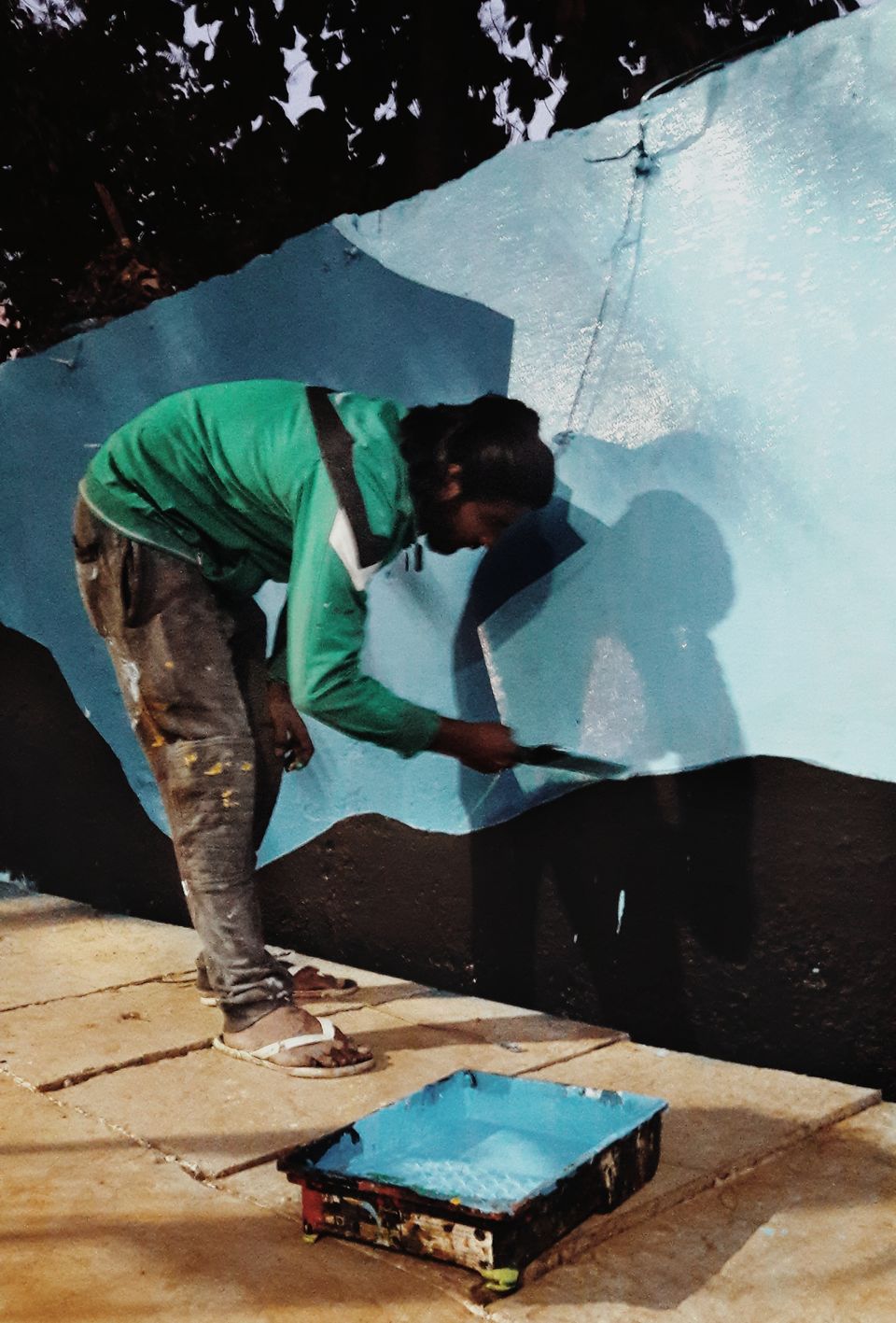 That's my dad posing like a pro onto streets allahabad 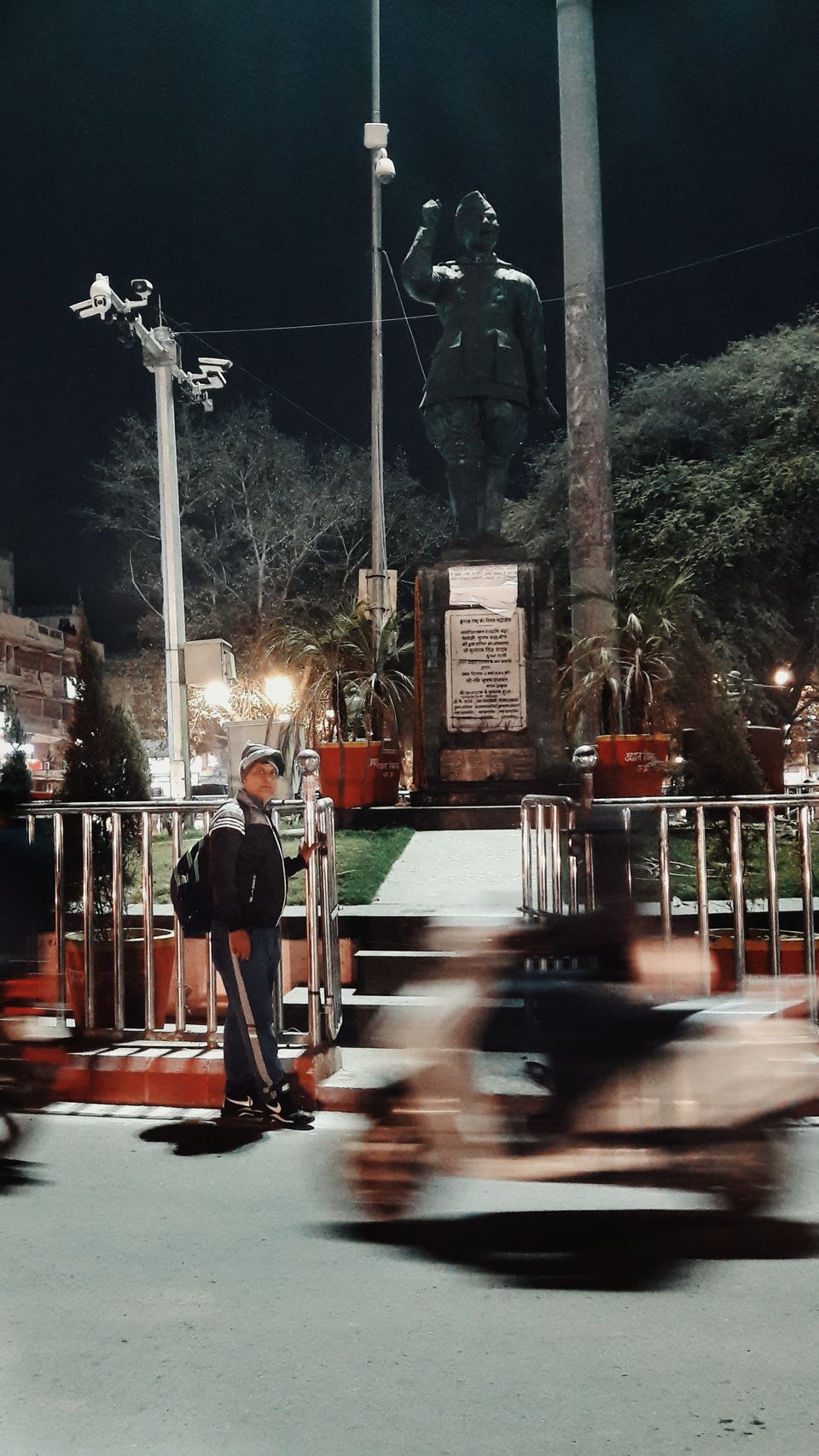 Now we were headed to Sangam and have to walk for 4-5 kms to reach same. I was tired and so was my dad, but he is more of a hustler from the beginning so he decided to visit Bade Hanuman Mandir first. At the Mandir, i was amazed to see that Lord Hanumana was in a rest position, as earlier i have seen Hanumana in standing or sitting positon in front of Lord Rama. We also payed our visit at Kanchi Kamakoti Peetham founded by Adi Shankara. It was designed so beautifully! The view from the top was worth seeing, it was so magical that i fell in the moment for some while. After that we went to Aashram. We were staying at Shri Parmanand Aashram.

You can find a variety of stays in form of Tents, Hotels, Homestays and also Public accommodations at cheap prices. You can check official Kumbh Website for same - https://kumbh.gov.in/en/tent-city

Me standing there starring at magical Kumbh 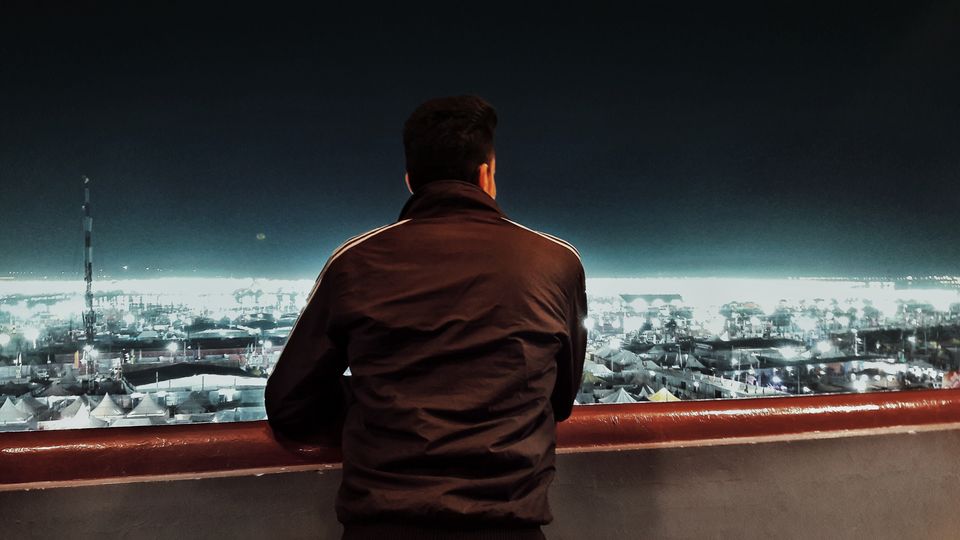 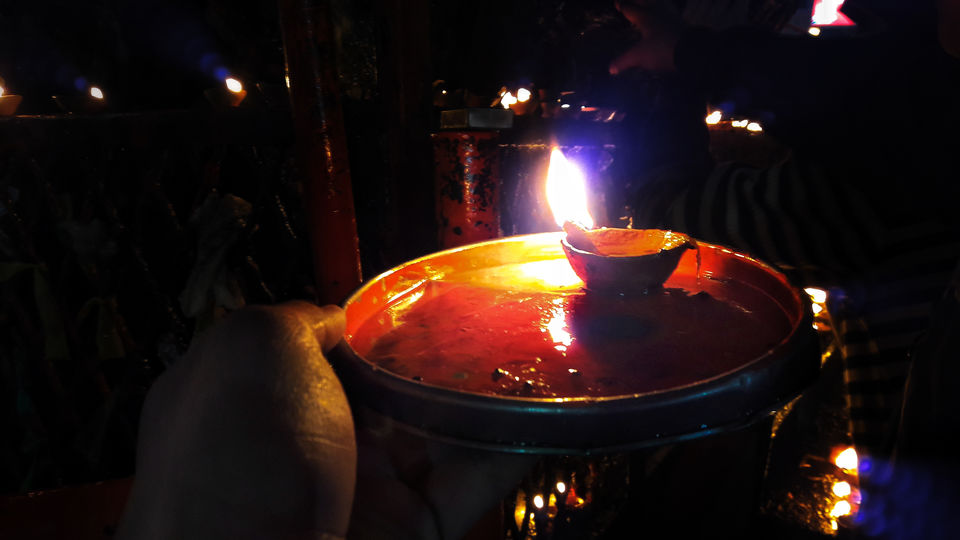 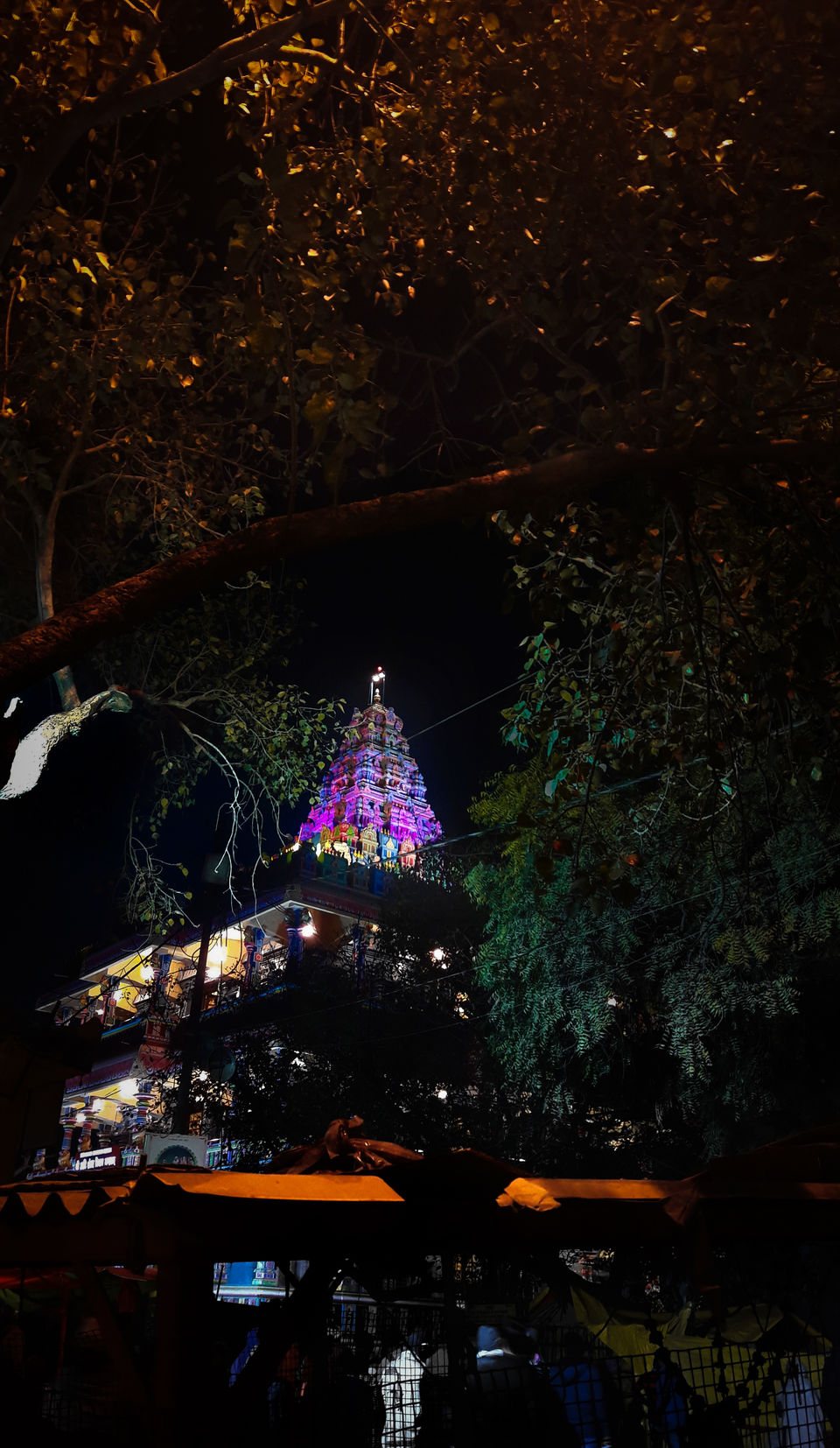 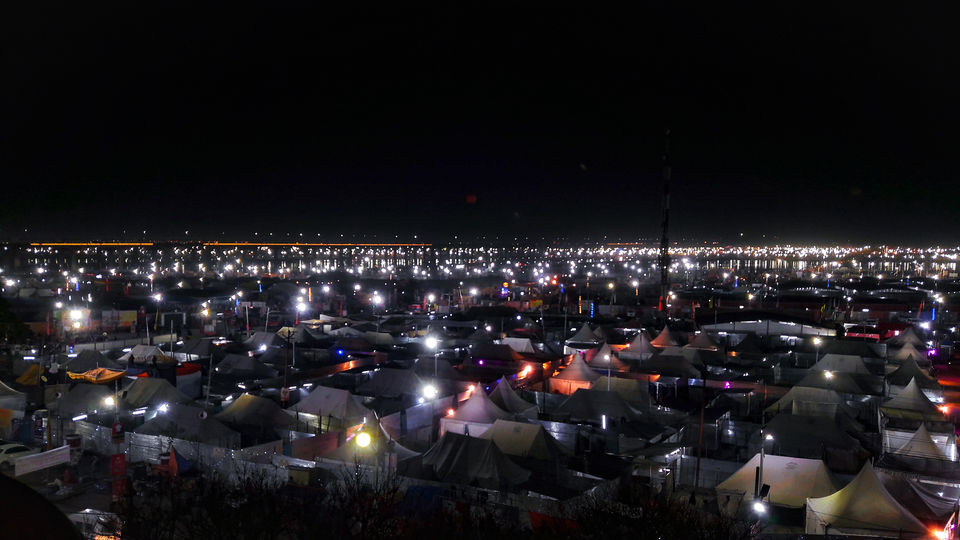 Woke up around 3 am, got ready and headed to Triveni Sangam: Point where holy rivers Ganga, Yamuna and mystical Saraswati meets. It was eve of Basant Panchami which is marked as indication of changing seasons and arrival of Saraswati, goddess of knowledge. It was 3 am in the morning and i witnessed mass of pilgrims taking part in the Kumbh Shahi Snan at the Triveni Sangam. Performing this sacred ritual is in accordance with the belief that by submerging oneself in the holy waters, one is purged of all their sins, release themselves and their ancestors from the cycle of rebirth and ultimate attainment of moksha.

Me standing out there in middle of thousands 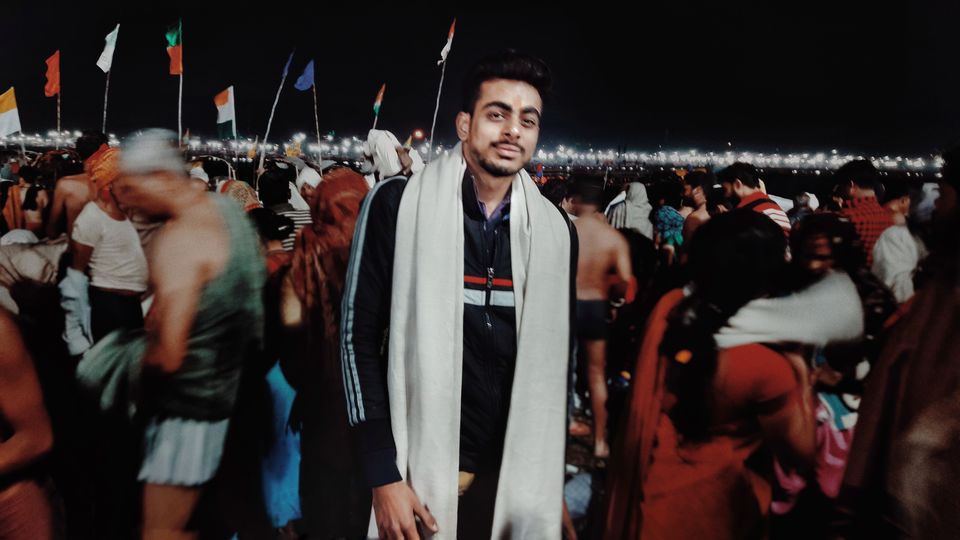 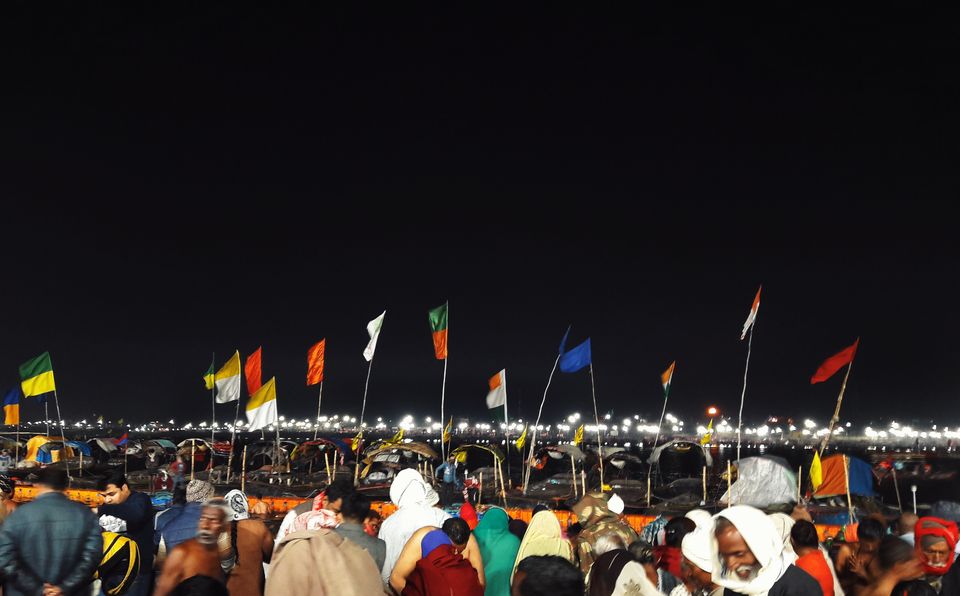 We got free by 5 am after having Shahi Snan at Sangam and planned to leave for Varanasi ( Banaras ). So from the Sangam point we took E- Rickshaw to reach the bus stop. It was so cold, and moreover i had snan minutes before sitting into an E-rickshaw causing shiver and cold. Distance between Allahabad and Varanasi is around 130 kms and it took 3 hours to reach Varanasi. After reaching Varanasi, first we payed our first visit at Kashi Vishwanath Mandir ( Ancient Temple ), one of the twelve jyotirlingas ( signs of Shiva ) on the western bank of holy river Ganga. After that we had lunch and went to Ganga Ghats. It was noon, and Surya was at its peak! I was feeling a little bit of down due to headache but then i sat on ghats for a while talking to ganges about soul and its language. I really wanted to take a boat ride but it was not the right time to do it. I surely missed major things of Varanasi to explore including streets, boat ride at ghats and the Aarti itself. But i will surely plan another one for Varanasi and will explore better part of it. Went back to Prayagraj, reached by evening. Spent some time roaming around the Sangam and enjoying the fair. Went back to Aashram, had Bhojan ( Dinner ) and ended up having a good amount of sleep. 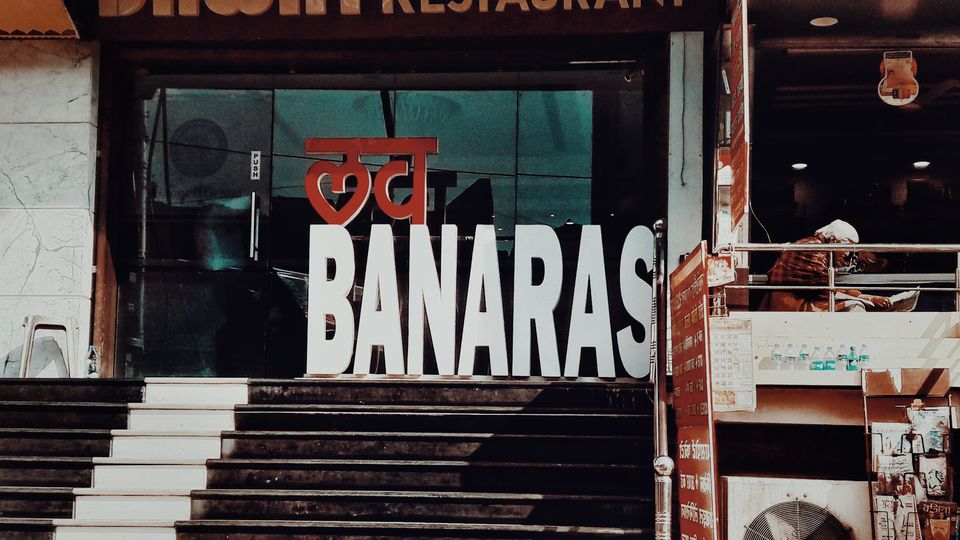 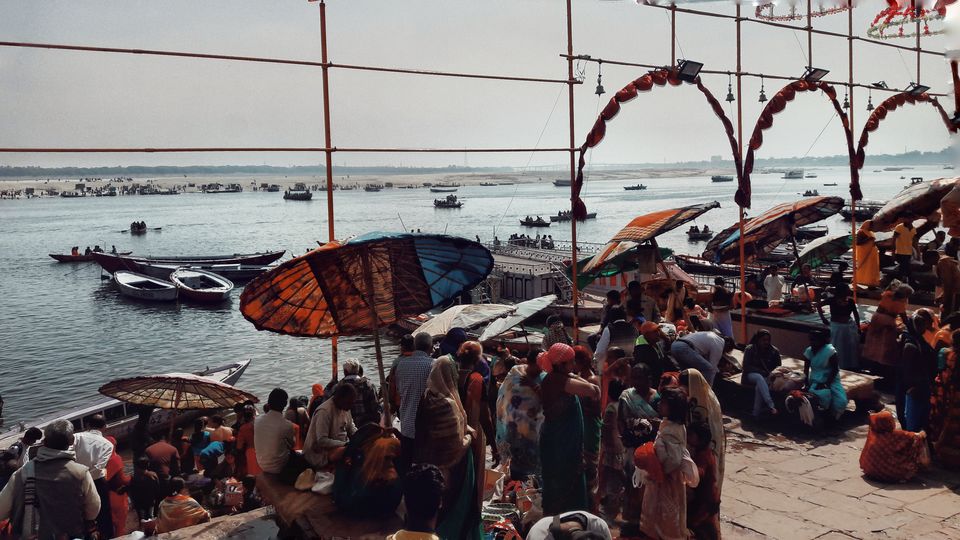 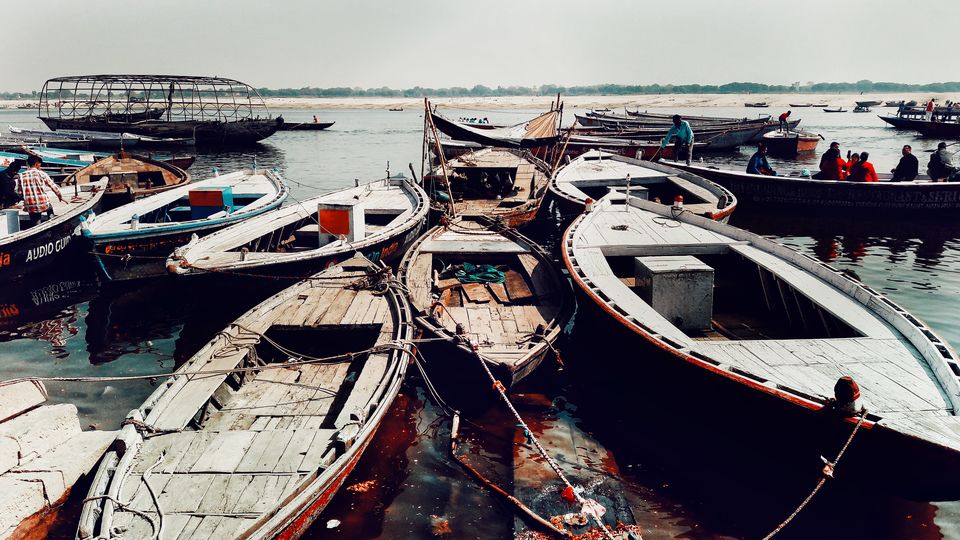 Next morning we went to Sangam again for the last time, my train was at 1 pm so we had enough time. Started with Snan, took a boat to float over sangam watching two holy rivers connecting together. Cost per person according to government rate is 60 bucks for a group of maximum 12 persons per boat, you can your personal too. Then afterwards we payed our visit to Sadhus ( Saints ) who spend most of their time chanting mantras and name of Shiva. They have a very simple lifestyle, most of them wear Saffron coloured clothes which signifies Sanatan Dharma. I was not able to take boat ride at Banaras, but had chance to do so at Sangam. 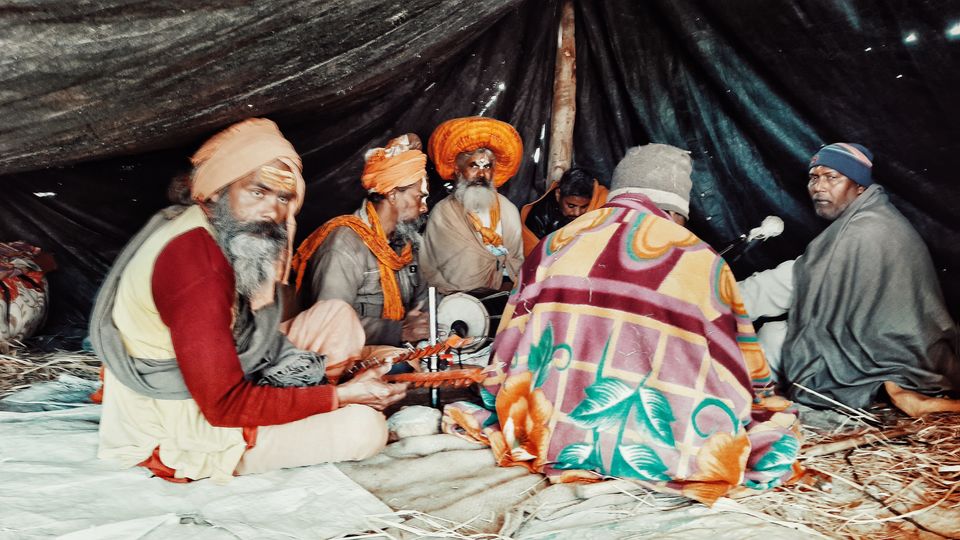 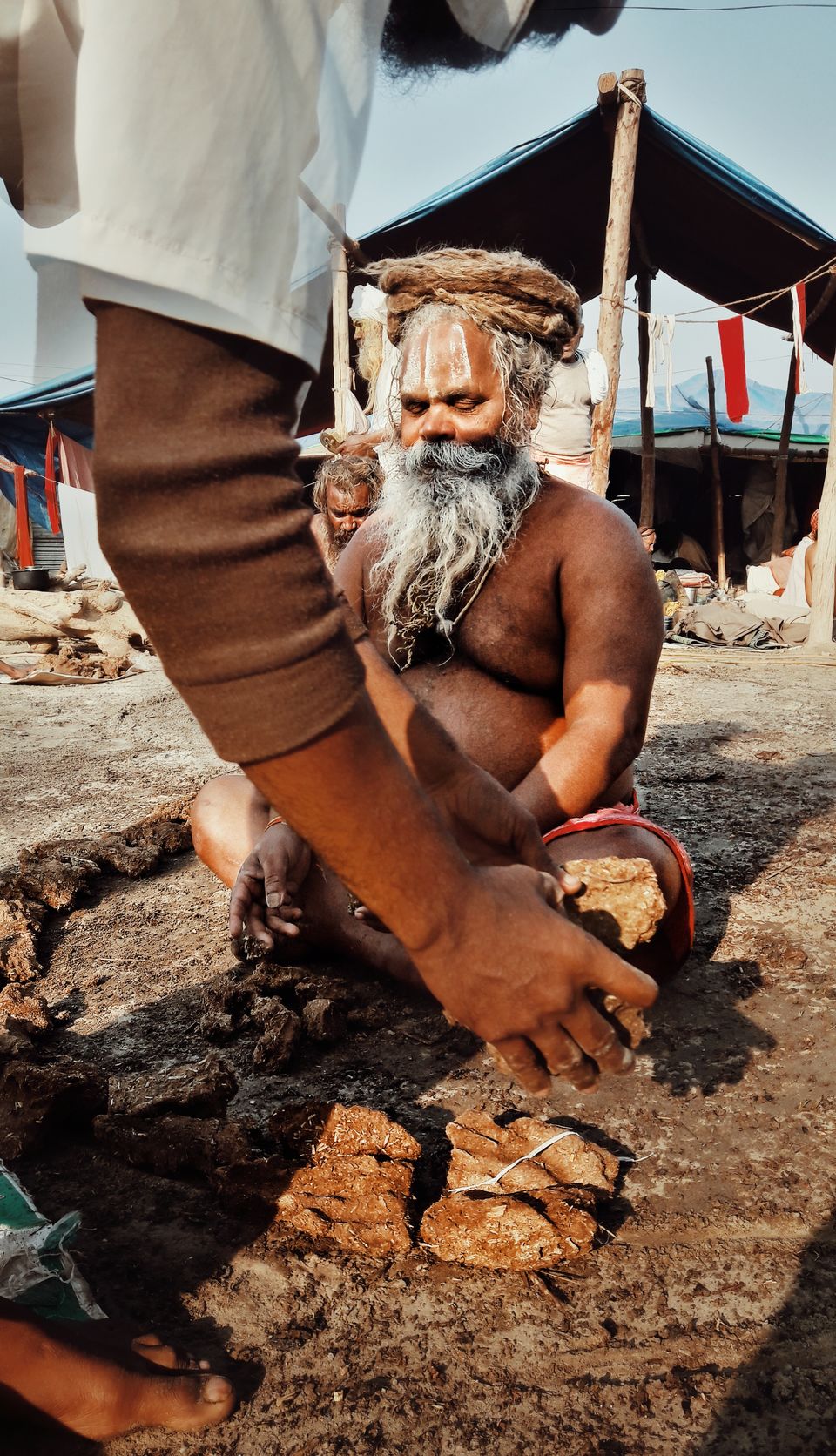 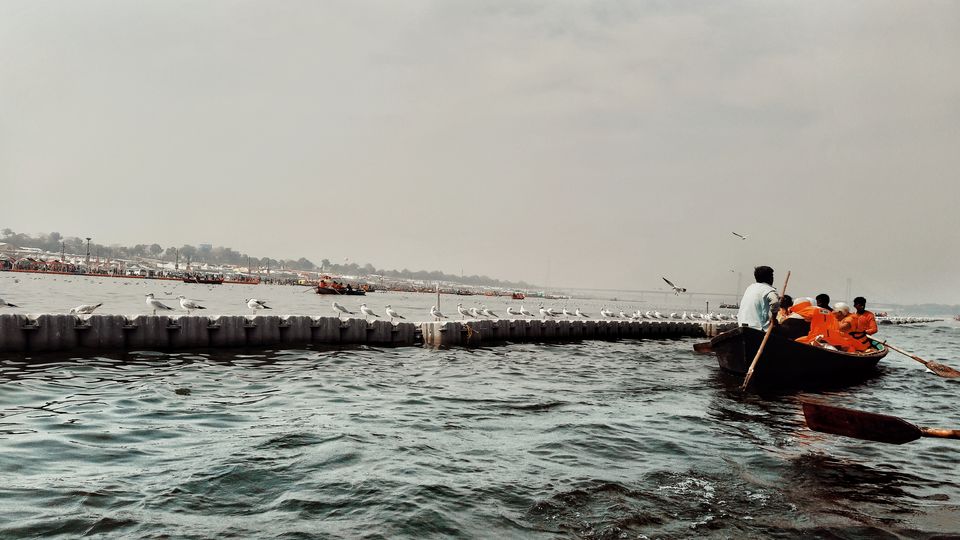 Pilgrims going through boats to Sangam 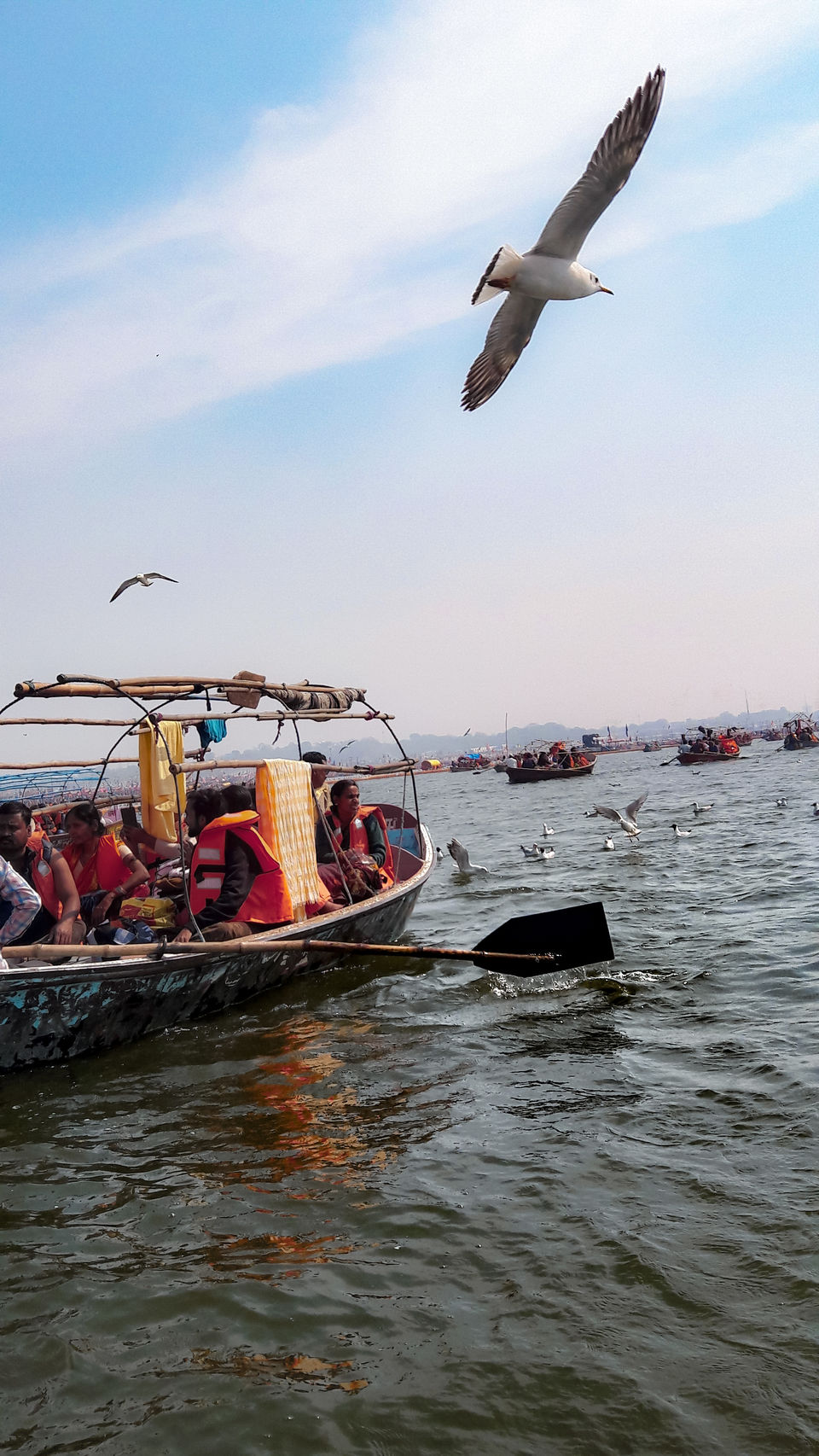 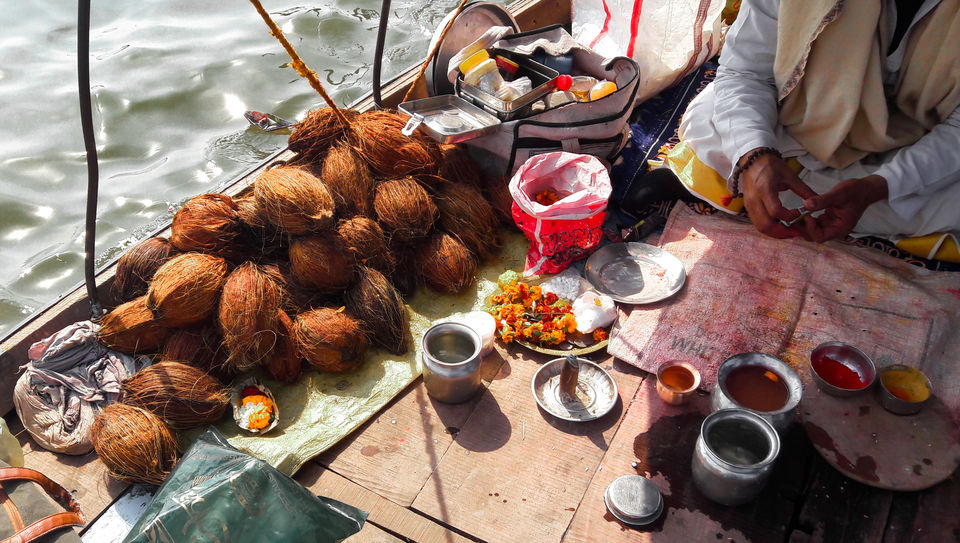 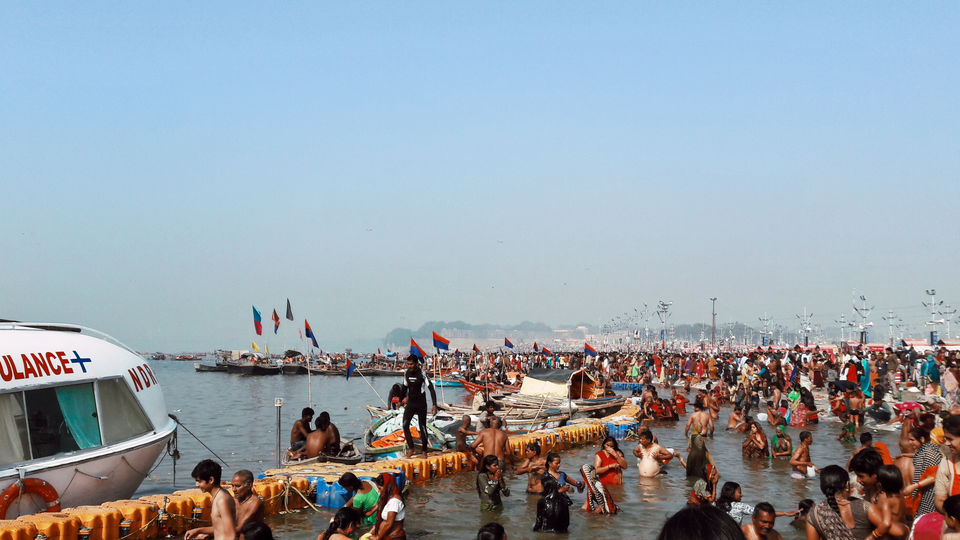 Goodbye's are hard! Prayagraj you will be missed and remembered for sure. It was hell of an experience, learned alot out of KUMBH and will be keep learning through upcoming Kumbhs. We still had enough time till departure, so i ended up capturing streets and people at sangam. 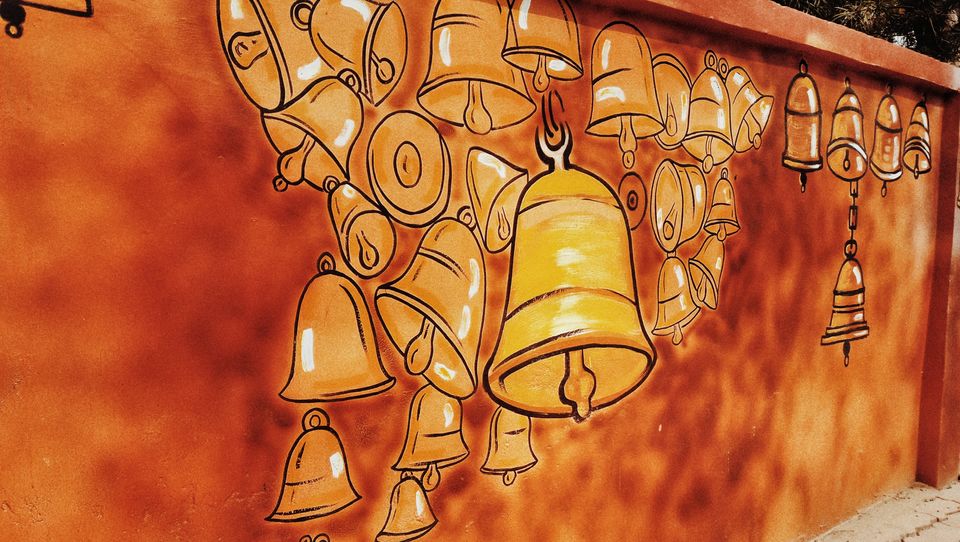 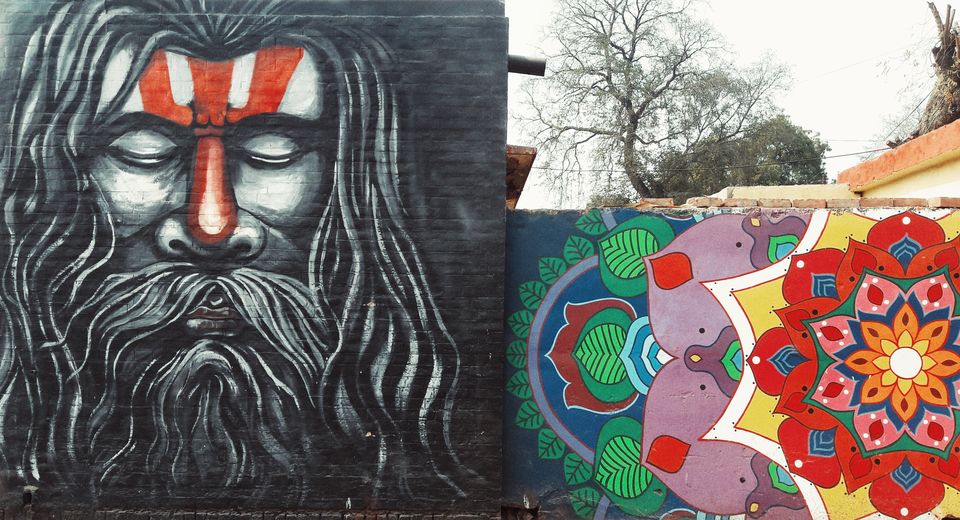 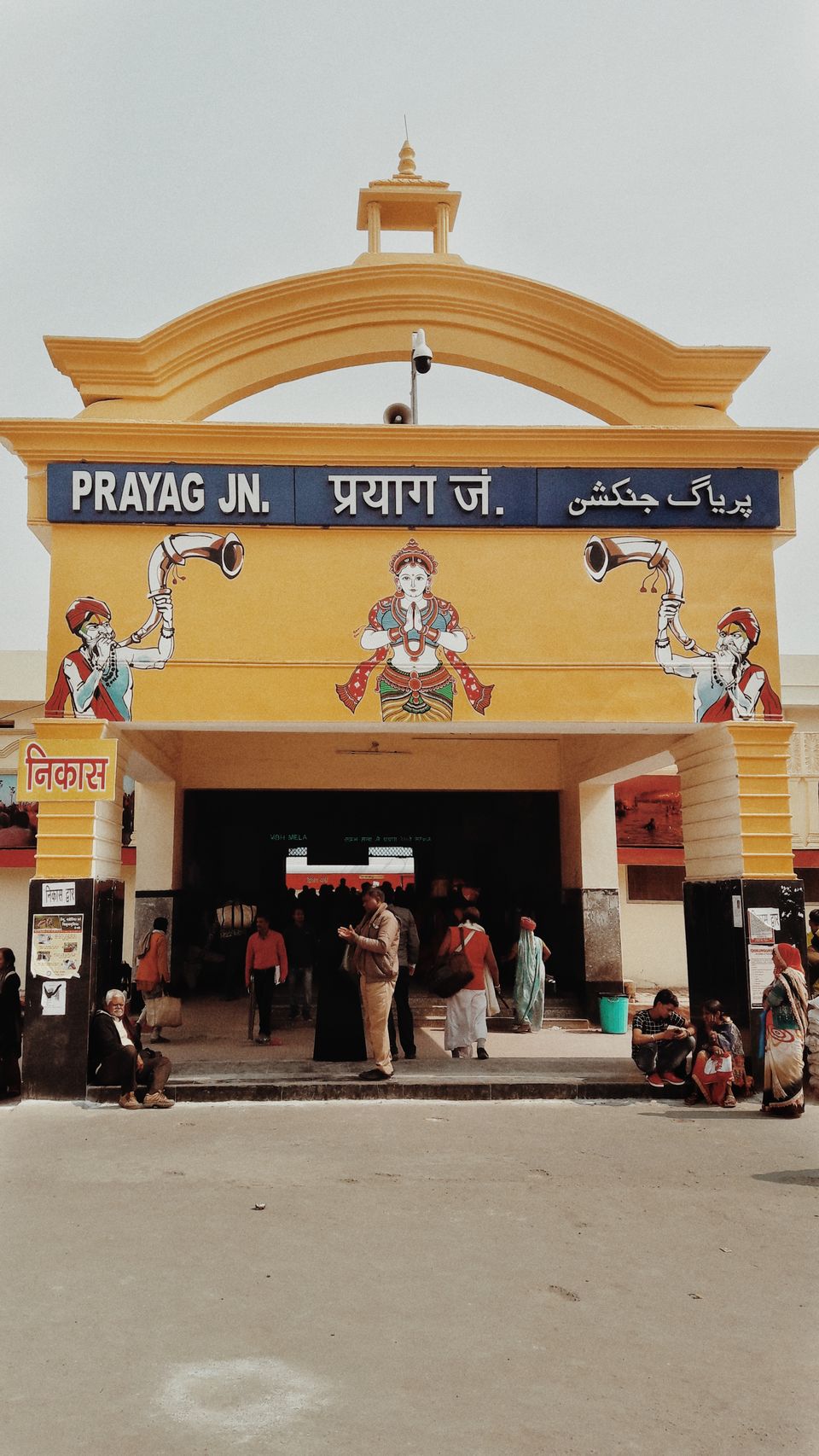 It's time to leave, but we leave to come back. Don't we? At first i decided to witness this journey just for a photography contest, but then i was able to figure out bigger things going around the world. I was able to find and change the real purpose of this journey. 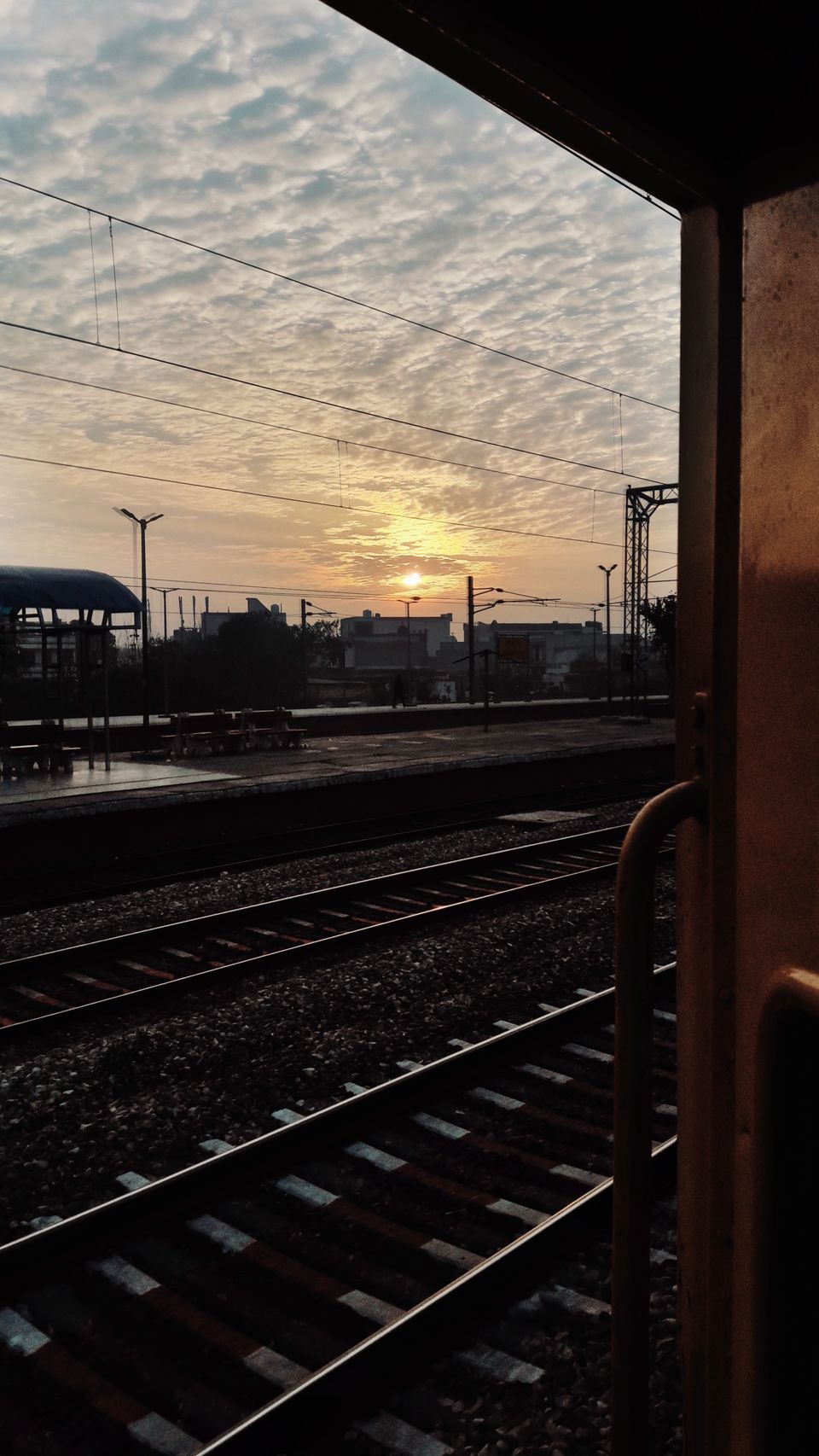 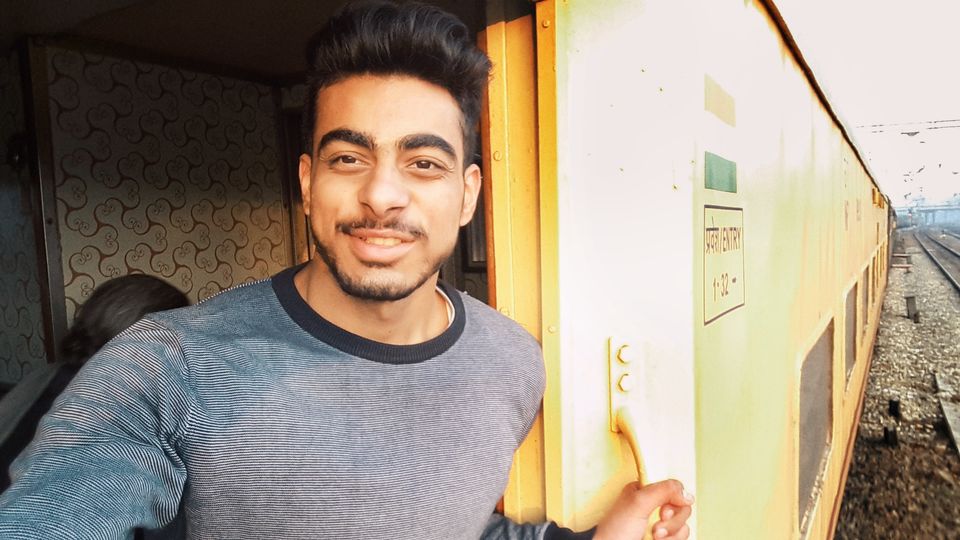