The Game of Luck

Clouds were gathering fast and I could hear the faint thunder sound from the neighboring woods. The large dining hall of Wildgrass Lodge was empty and and was appearing even darker than usual. While waiting for my last lunch of the trip, I took out my camera and started scanning the images from previous safaris. Few shots of Rhinos, Elephants and otters and nothing else; and now looking at the weather there was not much hope left from the last safari. 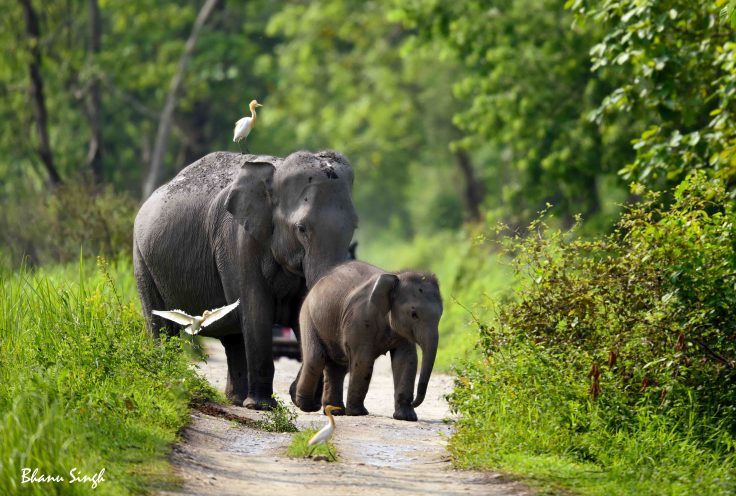 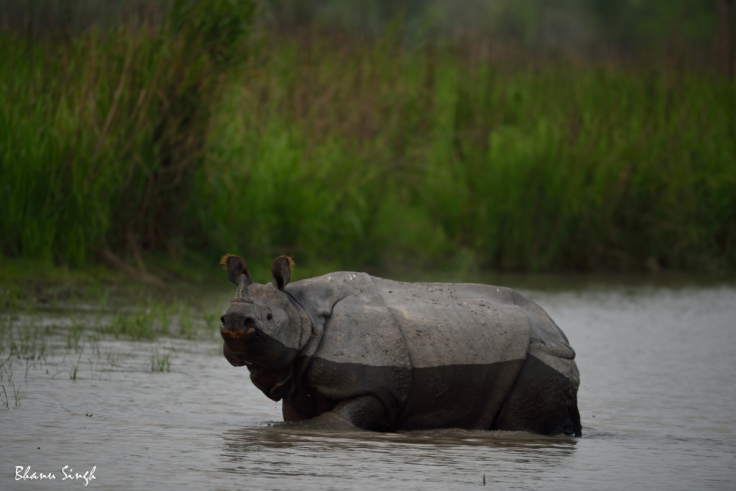 Suddenly my guide, Gokul entered the room and announced, "Sir, lunch is ready.Should I ask them to serve?" I nodded my head without looking at him.

As lunch was being served, Gokul pulled a chair and sat beside me. He said empathetically "Sir, don't worry, I have hired a spotter for this safari. His name is Binod and his success rate is 100% in this season". I bursted into laughter and exclaimed.. "What! since when you needed a spotter?" Gokul replied, "Sir, this is a game of luck... since our stars are not shining, there is no harm in trying new ones". I never believed in stars as they never affected me but at that moment I decided to follow what Gokul had planned, there was nothing to lose anyways.

I finished my special lunch served with many varieties of Assamese delicacies including my favorite dish, 'Maasor Tenga' (Sour Fish Curry). To make is even more special, the manager of lodge declared that lunch complimentary for me. Never experienced such warm gesture of saying good bye! Humbled and with full of gratitude I stepped out of Wildgrass and walked towards my gypsy. By now the weather was slightly improved, it was cloudy but not as gloomy as it was before. My driver,Bipin who was cleaning the front glass of gypsy saw me coming and said, "Sir, I have cleaned it so well that now you can take pictures from inside as well". I smiled at him and hopped in the back seat.

asked Gokul in a jovial tone, "So, where is your spotter?" "Sir, Binod will join us at Kohora gate" Gokul replied in his ever smiling voice. Binod was awaiting us near Kohora in his camouflage attire and binoculars around his neck. Elated with his first impression, I said "now we are all set for this safari". Binod smiled and like a seasoned leader made his first decision quickly, "We will go to Western range, there is not much hope in Central." We agreed without any question and reached Bagori gate before time. Gokul completed entry formalities quickly and we were the first one to enter the jungle. We covered some ground and few meters ahead of Dighali Beel (lake) Binod asked Bipin to stop, for routine scanning of the potential area. There was nothing alarming, all guides follow similar practice; so I was sitting calmly in the back seat until all of sudden Binod shouted, "Tiger!!!". I jumped from my seat and took his binoculars to confirm. Before I could spot Gokul confirmed, "Sir, it's there; sitting in the grass". His confirmation had given shiver down my spine. I focused in the direction and saw an orange head popping out of green grass. 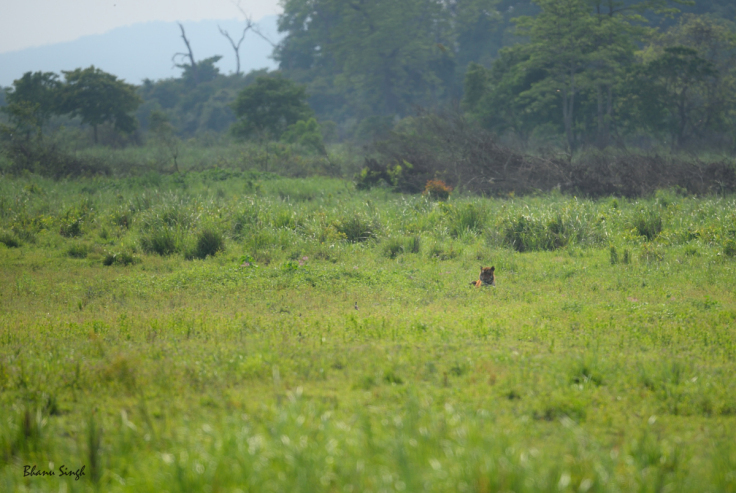 I overwhelmed with the spotting skill of Binod and bowed in front of him. He was jumping with the joy of victory. I took few pictures and later noticed this was a female tiger. There is a known mantra in wildlife photography - If you spot a tiger, spend as much time as you can with that; don't leave the place. And we were following the same mantra. Binod asked me to point camera in opposite direction as there were other gypsies approaching us, later I came to know this was his trick to distract and minimize the crowd. Soon other vehicles moved away as they could not find anything there to keep their clients interested.

Gokul who was keeping an eye on our jackpot said, "Sir, a female Rhino with its calf is approaching in the same direction, get ready!! There could be some game." Controlling my excitement, I placed my camera on the gypsy hood and focused. Mother rhino was moving slowly and by now both tigress and rhino were aware of each other's presence. 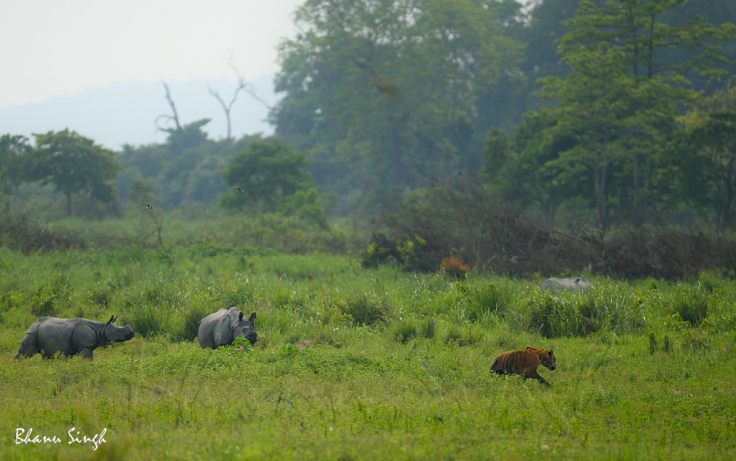 Tigress snarled at Rhino but mother rhino who was accompanied with her calf was not ready to loose her ground instead she charged at tigress. Tigress got scared and lowered her guards. Mother and calf both were behind a cat, who was running with her tail between her legs until she got into the Dighali Beel (lake). 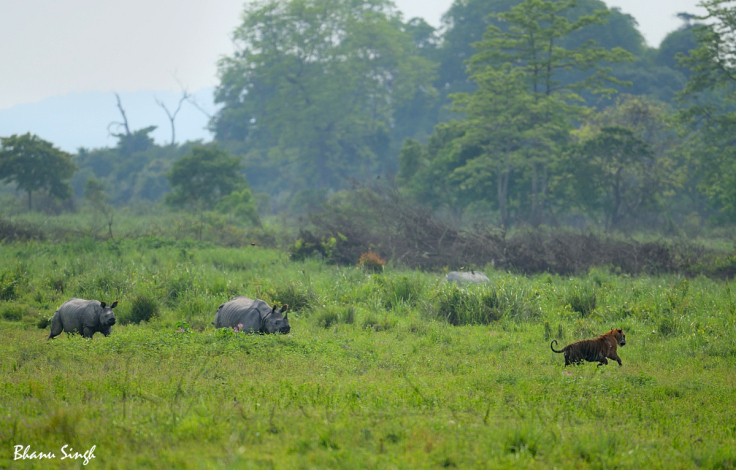 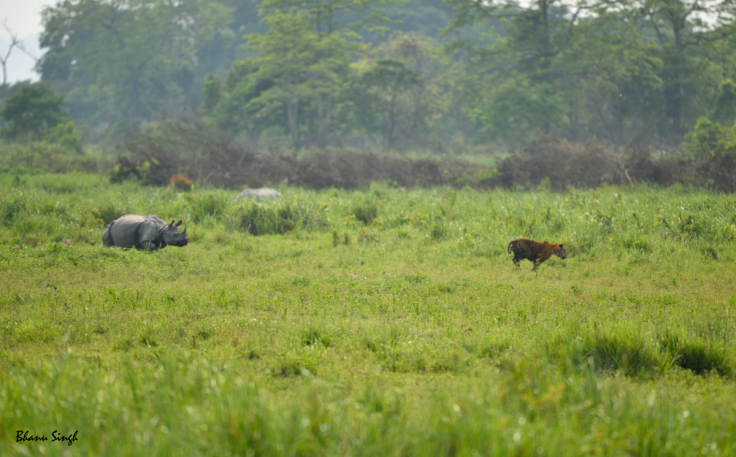 I knew I had captured some of the lifetime frames... yet there was some hope left as the tigress was going to cross the Beel. So we moved quickly and positioned ourselves strategically. 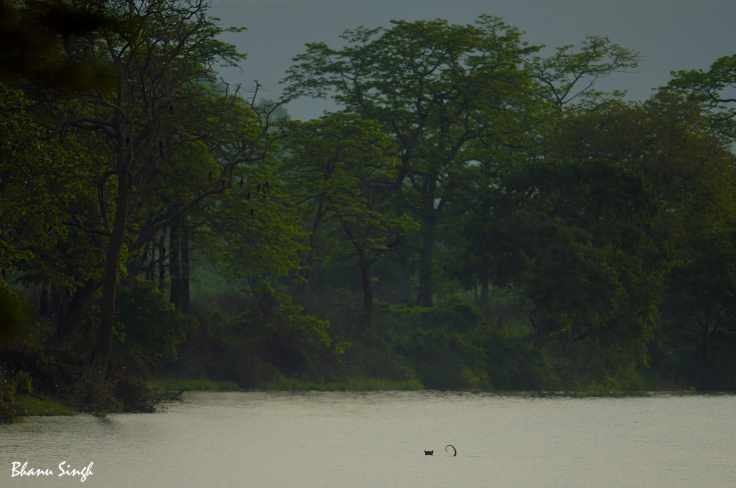 We saw her crossing slowly and as she was approaching the shore a Wild Water Buffalo saw her too and instantly released charge. Now poor tigress had no choice, she took 'U' turn in the water and started swimming back. 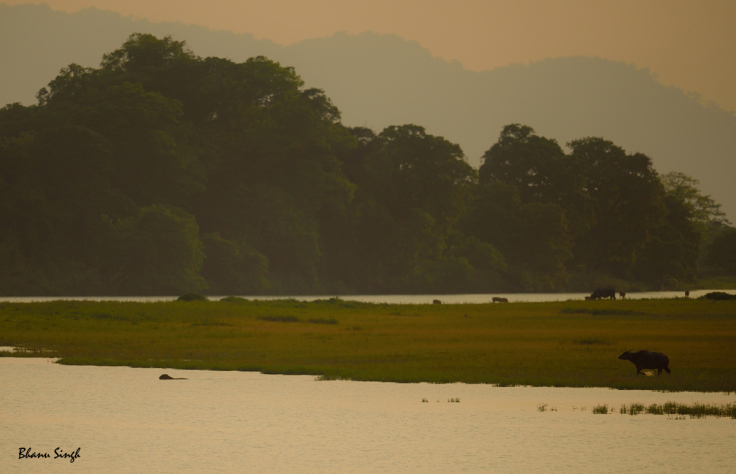 Past few minutes were beyond my imagination but as Gokul mentioned "This is a game of luck..." and without any doubt this was my blessed day. We followed her for some more time and later she hid herself into the bushes near the shore. 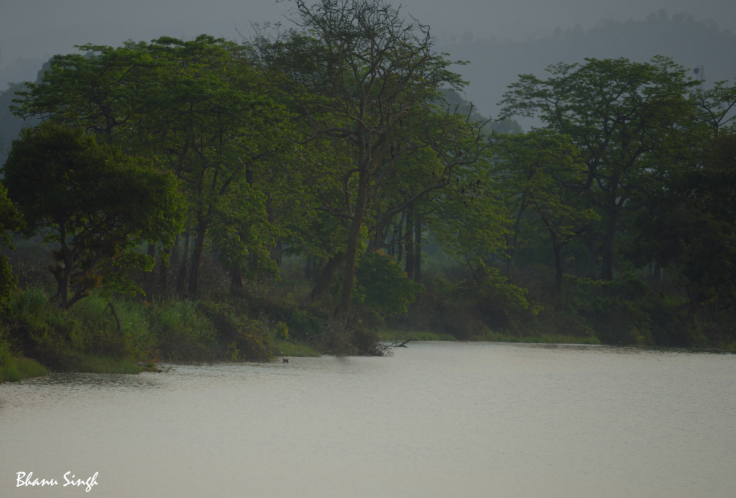 Clocks were striking 6 and we had to leave her for some much needed rest... "The Game of Luck" was over with some lifetime memories. I thanked Gokul for introducing me with one of the best wildlife spotter, "Binod".