Pench, Collarwali and the Bengali

It had been nearly a year since I had visited the jungle and I had begun to start missing it.

On that fine morning there was a discussion going on, on the radio about a tigress called Baghin Nala from Pench who had been found dead and it was suspected that poisoning had been the reason for it. It broke my heart to hear it, especially since she had just given birth to 4 cubs. For all things tiger, I call up Adeet Ghosh A.K.A Lala our family’s jungle man and my eldest brother(first cousin on a technicality)

He said he was going to Pench in the coming week. That was all I needed to hear. Pench had always been on my list of places to visit since the Jungle book was set in this place! I got to the office, applied for leave and booked my tickets. Best first 30 minutes of the work day ever!!

The jungle has it’s own infectious charm and the week went by very slowly. I flew to Nagpur and met my brother there and we drove to Pench which is about 2.5 hours away. We discussed Baghin Nala and the various tigers of Pench on the way. Collarwali was the tigress that got my attention since this was a very unique name. She gets her name from a tracking collar that the forest department placed around her neck as a tracking device. I am pretty certain the device stopped working a while back and now it’s just there.

We checked into our hotel, a very fancy property called Tuli Tiger Corridor(I would highly recommend it), dropped off our luggage and got ready to make our first trip into the jungle.

Tuli Tiger Corridor. A very fine property to stay at. 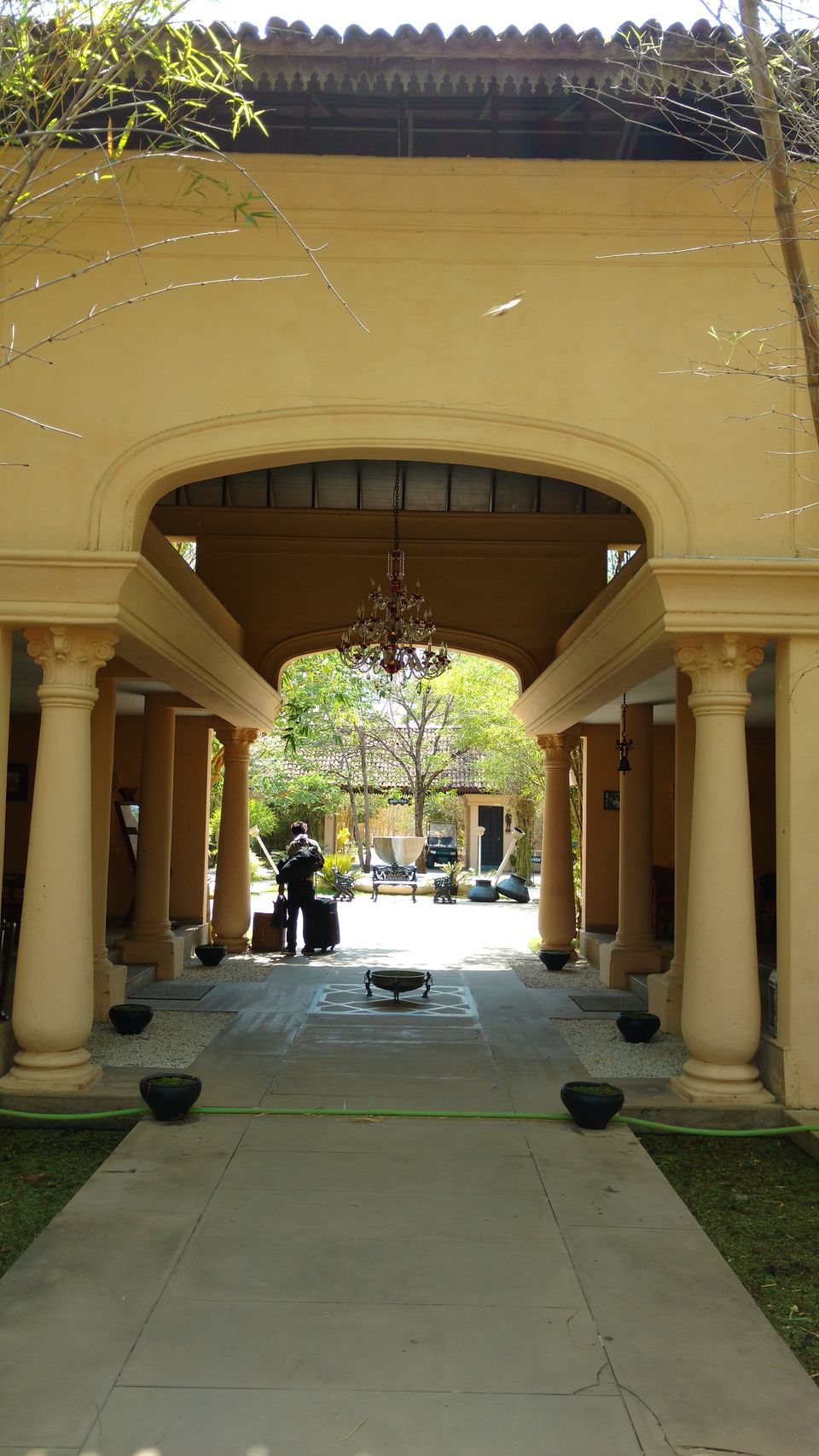 Perfect place to chill out at night. 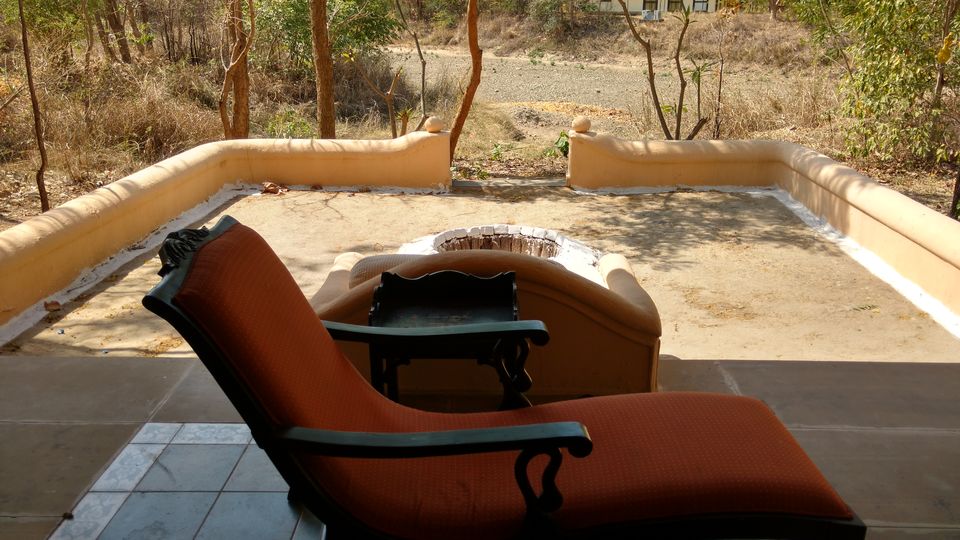 It was a scorching 45 degrees outside. Till date I haven’t quite been able to answer the question, “Who goes to the jungle in this heat?” convincingly. 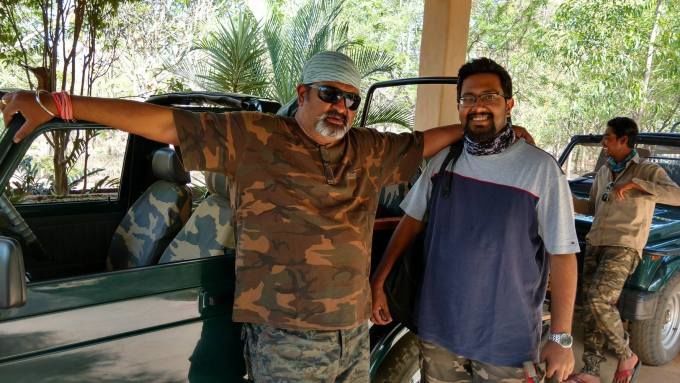 My best friends in the jungle-The Canon and the Cube! 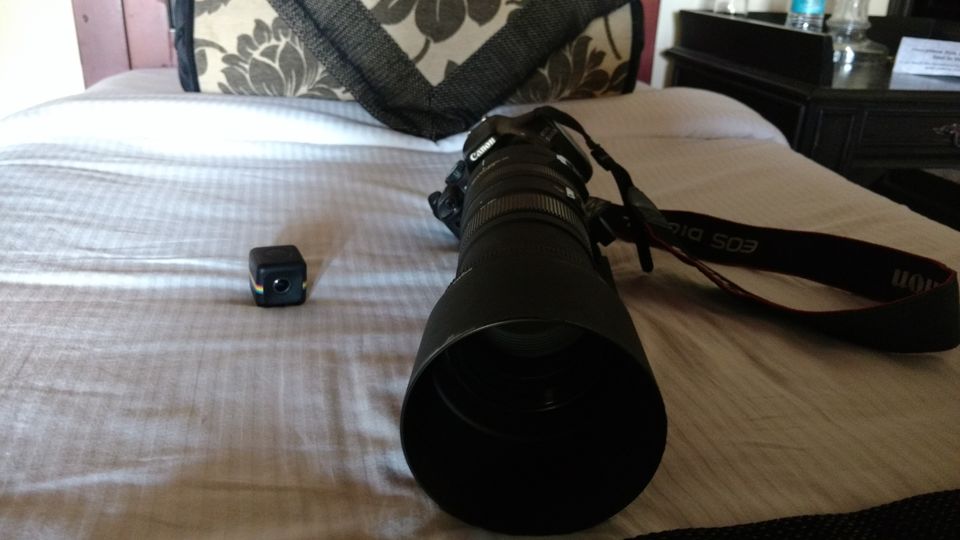 The first excursion proved fruitless as we didn’t spot any tigers.The guide kept trying to show us other animals but he gave up after 15 minutes when he realised we weren’t interested. We returned back to the hotel, tired, disappointed and burnt to a crisp.

Sunset in the jungle. 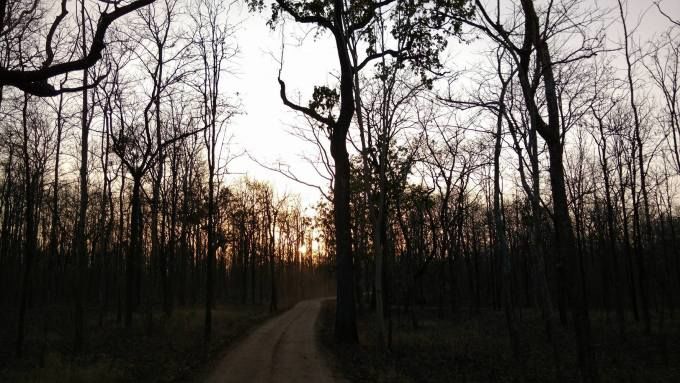 Next morning we were back in the jungle looking for Collarwali. We drove around with no luck. A jeep crossed us with a very excited Maharashtrian family telling everyone they saw, “Kiti sundar wagh!”(Such a beautiful tiger)

Now as much as I want everyone who visits the jungle to see tigers, it shouldn’t come at the expense of me not seeing one(Yes I can be petty). I returned their excitement to them with a frown. After a while we decided to stop for breakfast.

Breakfast in the jungle. 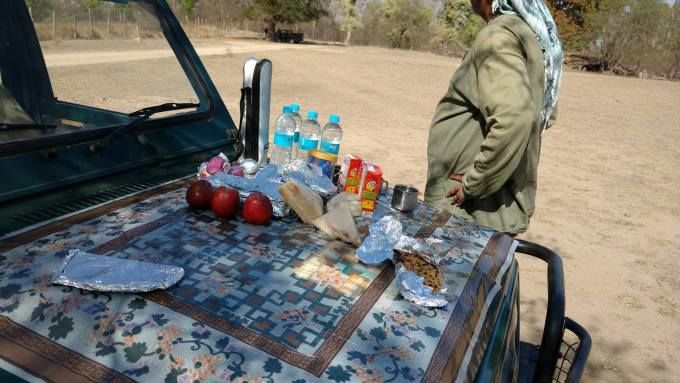 Pench has a spot in the middle of the jungle where the gypsy pulls over and tourists can get down and eat breakfast. It’s quite an experience to use the bonnet of a gypsy as a table. Our driver pulled over to the spot and as we got out and stretched our legs our driver dutifully pulled a big hamper out, spread a laminated table cloth on the bonnet and went about setting up breakfast. Boiled eggs, sandwiches etc. etc. A veritable feast.

Lala and I were discussing the fruitless attempts made so far at spotting any tigers on this trip so far while munching on some incredibly yummy sandwiches.(Cucumber sandwich+boiled egg+pickle) Just then a jeep pulled over next to us with a very excited family. “Tiger!Tiger!” was all the superbly incoherent group could say.

Lala and I looked at each other and then at the driver. “Gaadi chalu kar!” I half shouted at the driver as Lala ran towards the jeep. In one quick move the driver pulled the table cloth and everything on it into the hamper. It was pretty cool actually(Just like the waiters in the movies). In less than 30 seconds we had pulled out of the picnic spot and were driving back towards the jungle. By the time people could understand what had happened we were gone leaving behind a plume of dust over their breakfast.

We had our cameras out, ready for the first sighting of this trip. We came across a couple of jeeps parked at a spot. The tigress had just gone by into the thicket we were told. We had had enough of close shaves and were in no mood for another one. The engine idled and we sat quietly contemplating the next move. “Seedha lo. Dikhegi humein.”(Go straight. We will spot her.) Lala said in his quiet, dismissive way as he went about adjusting his lens. The gypsy went along and we stayed on the lookout. The summer months ensure higher visibility as the trees don’t have any leaves and tigers come out to drink water at the ponds.

“Stop here.” he said. The driver braked. I looked at my brother and he pointed towards the right. I couldn’t see anything. In the meantime he got into position and pointed the camera towards the right. Confused, I got into position as well though I didn’t lift my camera. I was still trying to sight the tigress. 20 seconds later, a silhouette appeared in the distance. 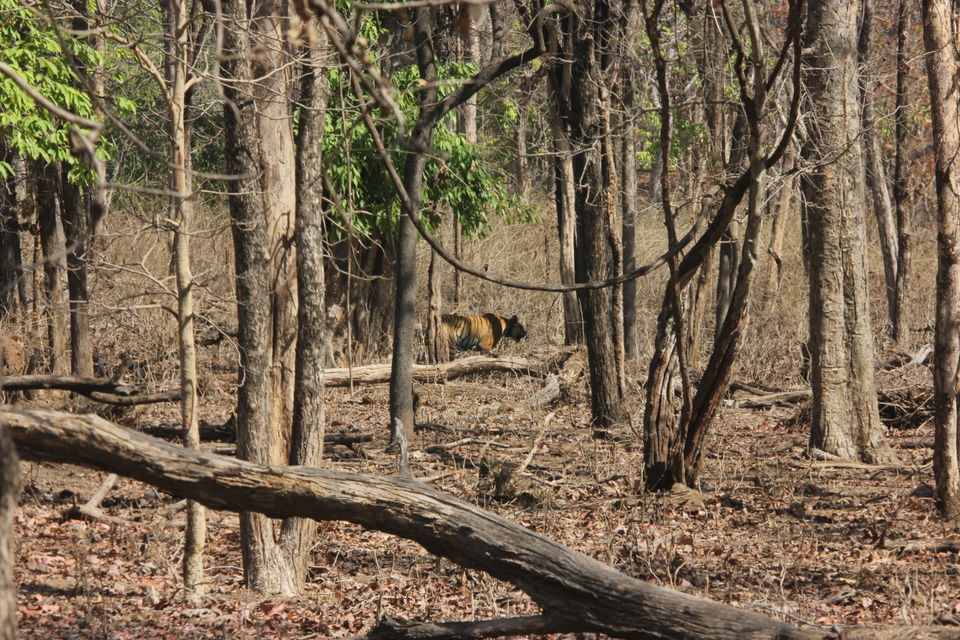 I couldn’t believe it! Lifting the camera I started clicking. Collarwali came walking towards us in all her grace. She is lighter skinned than other tigresses and that makes her unique. She’s strikingly beautiful. She walked past us without so much as giving a glance. After all, this was her territory and we were the visitors. 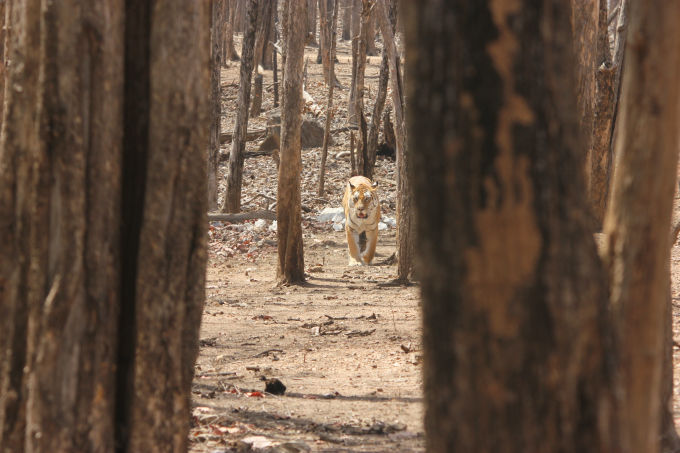 She walked on and we followed at a respectful distance. She went on to a different path within the trees and we raced ahead on the trail to catch up with her. Maybe she was in a benevolent mood, she just stopped and stood there letting us photograph her. For about 45 seconds she just stood there.She was within touching distance of us and as luck would have it, technology failed us. With lenses designed to cover distances we couldn’t photograph her properly at such proximity. There is something surreal and very special of coming within close distance of a tiger. It is an incredible leveler, setting man in his rightful place in the greater scheme of things. 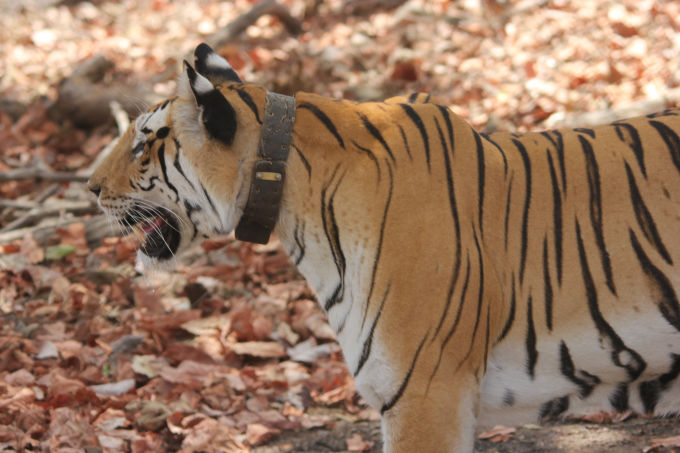 Having decided that we had seen enough of her, she decided to go ahead. Not ones to overstay our welcome, we turned around and headed back out of the jungle. 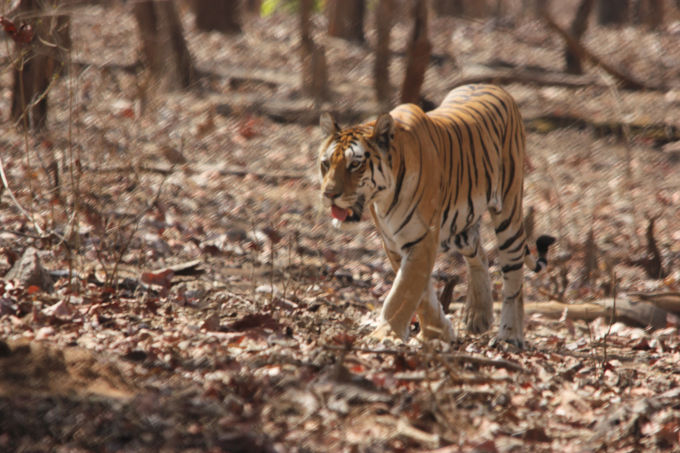 The jungle doesn’t encourage conversations but if you listen, she will tell you a lot. As we headed back on the dusty route to the hotel we sat in silence examining the photographs that we had taken.

Collarwali’s sighting was the highlight of this trip for me. I still can’t get over the quiet confidence with which my brother predicted where Collarwali was going to come from. This comes from years and years of experience and love for the tigers. Hopefully one day I will be able to read the jungle the way he can.

This post is dedicated to you Adeet Ghosh for without you I would never have seen the jungle the way I did. Fortunately or unfortunately, I am hooked to the jungle for good and the next adventure shall be even more epic. I can feel it in my bones.

To countless tiger sightings, countless glasses of whiskey and tons of kebabs...the adventure has just begun!