The land of warriors: Manipur as a tourist... #BestOfTravel 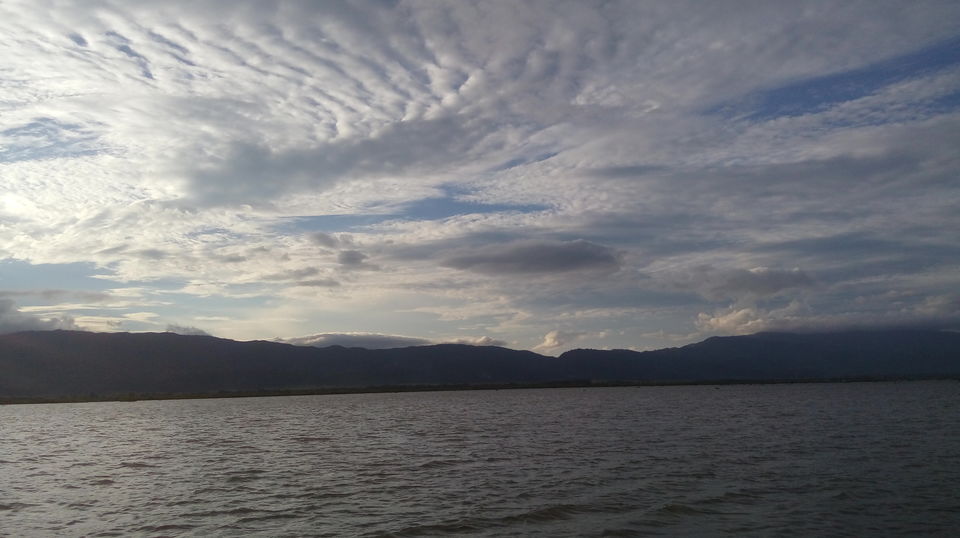 For years I have heard people say India has places of natural beauty which can put any western country to shame. I had yearned to visit one such place for ages and this time my wish was finally granted with a 4 day trip to Manipur.

It has been almost a month since I visited Manipur yet I vividly remember my first view of the state from my flight window. The thick blanket of cloud above which we were flying suddenly blew away to reveal a dark blue stretch of water dotted with green of varying sizes. I learnt later that it was the Loktak lake, the only fresh water lake in the world with floating islands. But we will get there later. The airfield is really tiny so the flights land suddenly and brake hard but do keep your eyes fixed on the window for the beautiful hills that surround the airport is mesmerising.

I reached late in the afternoon so the touristy things were pushed for the next day. Now Manipur, being in the Eastern most part of our country has a very different day-night schedule. It gets pitch dark by 5pm and the sun shows its face at 4am. We stayed with a friend in Keinou which is a 40 minute drive from Imphal. On the way we made a quick stop at the Paona Bazaar. The market is the best place to buy branded clothes and electronic items for a dime. 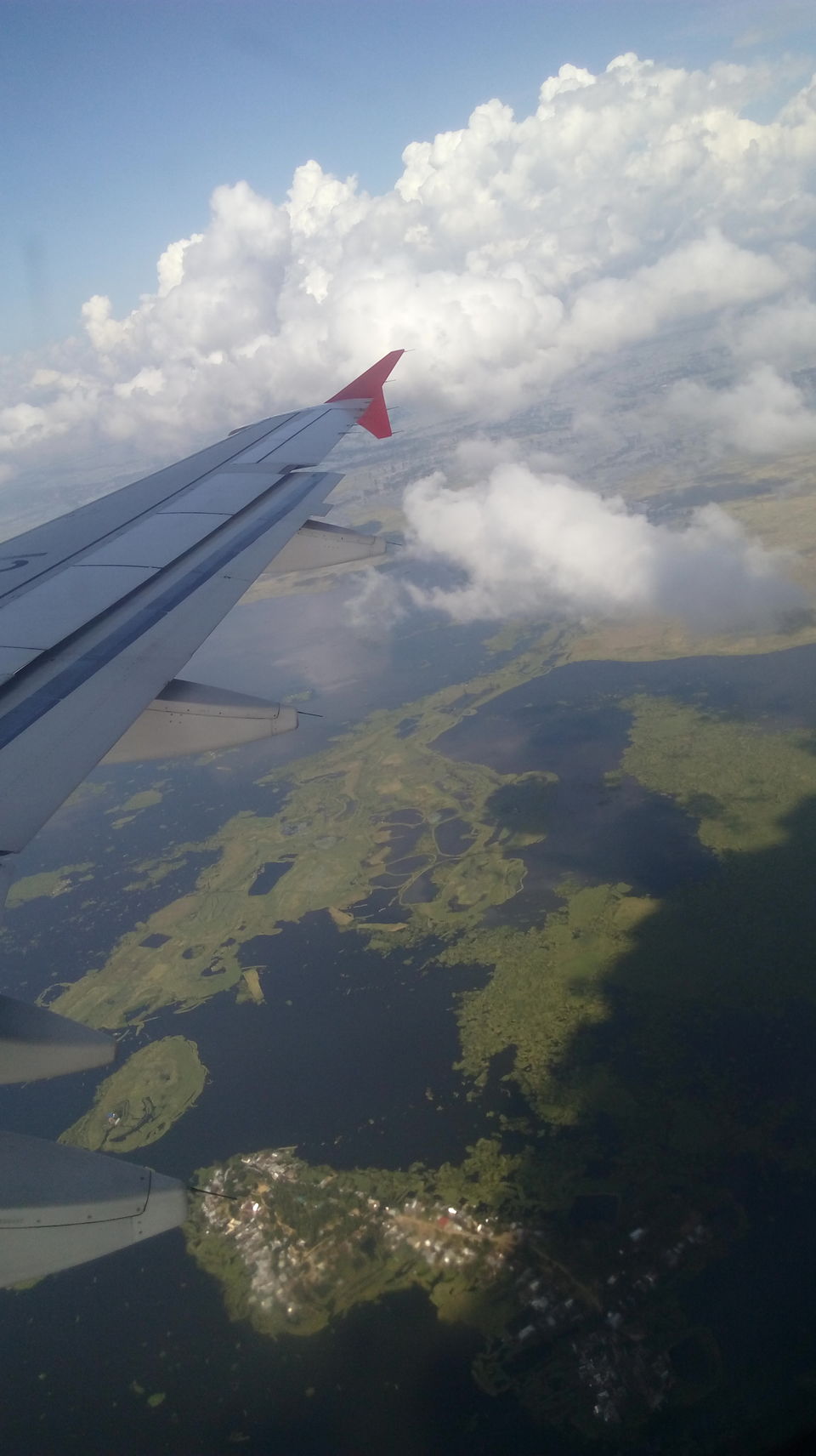 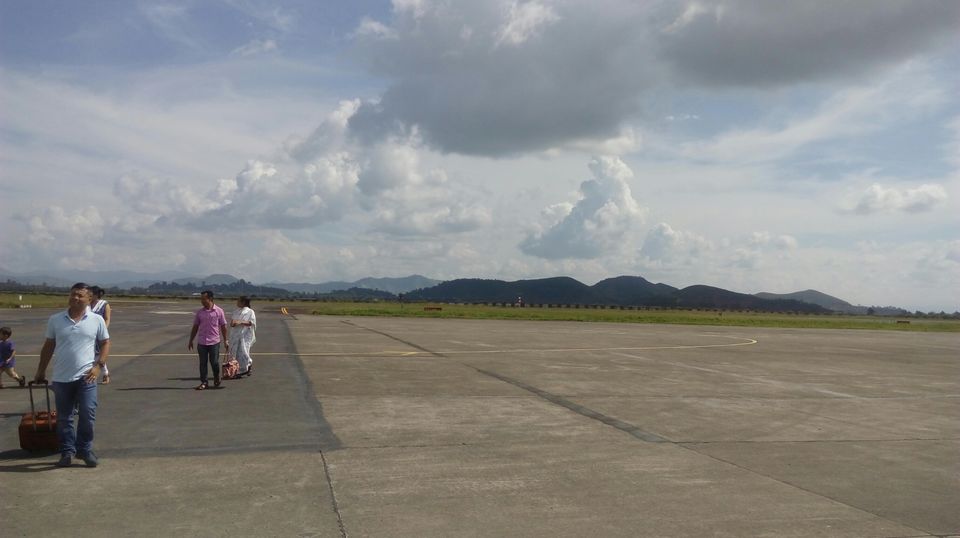 The day started quite early around 4:30am with the cackling of ducks and hens in the courtyard. Yes, most of the Manipuri households have their own poultry and they grow most of their vegetables. After a quick breakfast we started off for the Sri Sri Radha Gobindagi temple in Imphal. Unfortunately it was closed when we reached but the premises and golden dome shining in the bright morning sun was worth a visit. In the premises they have a huge rusty old bell and a huge courtyard for functions.

Next stop was Kangla which also was closed as it was a Wednesday. Kangla used to be the capital of Manipur before it became a part of India. A place of historical importance, it is worth a visit. A little ahead just beyond the polo ground is the Ima Keithel. Ima literally translates to mother. All the shops in the market are run by women and it's not surprising as most of the northeastern states still prefer a matriarchal society. My visit was around Diwali when Manipur is busy preparing for the biggest festival, Ningol Chakhouba. This is similar to bhaidooj except it honors the daughters and sisters of he family. The market was packed to the brim which was quite surprising as Imphal and it's surrounding areas are wonderfully less populated.

The ladies are very welcoming and they tried their best to converse with us in Hindi. The concept of machine weaving is still alien to these people so all the clothes, shawls bed sheets were woven in a handloom and everything is quite expensive.

After loads of bargaining I managed to buy one silk dupatta for 300 bucks. We would have continued shopping but everything is ahead of time in Manipur and by 1pm we were famished.

For lunch we visited Luxmi's Kitchen which is located near the Ima Keithel. It specialises in traditional Manipuri thali. Food can be a bother if you are vegetarian because they add fermented fish in all their dishes. Luxmi Kitchen has vegetarian thali but the taste of every item is quite different. They serve huge amounts of rice with some 10 side dishes and you finish it with the famous black rice kheer.

After lunch we went on a long drive through various districts of Manipur. The first stop was Khongjom War Memorial. This is a place of both pride and sorrow for the Manipuris. Manipur was an independent state before the British Raj. This was the place where the British had fought their final war in 1891 and completed the invasion of India and it's surrounding states. The war memorial has a huge structure atop a hillock to honor the brave warriors who laid down their lives fighting. A statue of the General Paona Brijbasi stands in full battle regalia at the foot of the hillock. The hillock provides a wonderful view of the beautiful city of Imphal and the hills surrounding it.

Our next stop was Langol village. It has a wonderful sunset point and the view of the setting sun against the rolling hills stays imprinted in the mind.

The road trip along the various districts of Manipur was incomparable. The winding roads connect the chain of hills which separate one district from other.

Once it gets dark, there isn't much to see for there are hardly any streetlights and the roads are bumpy and poorly maintained.

The rest of the night was spent in bursting crackers. Since it's a quiet and not very densely populated place the pollution from bursting crackers is negligible. Under the lovely starry night as the fireworks lit up the sky, the sorrow of spending Diwali away from family. 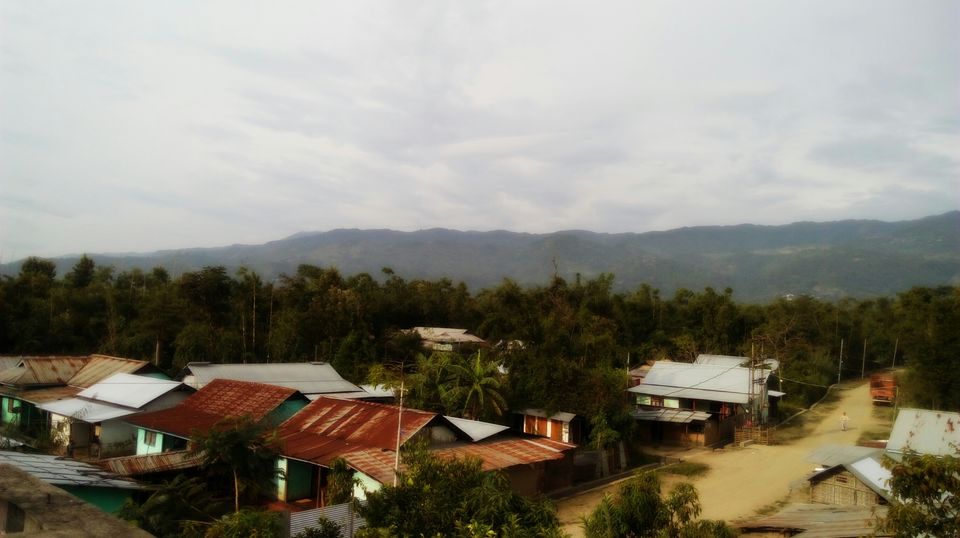 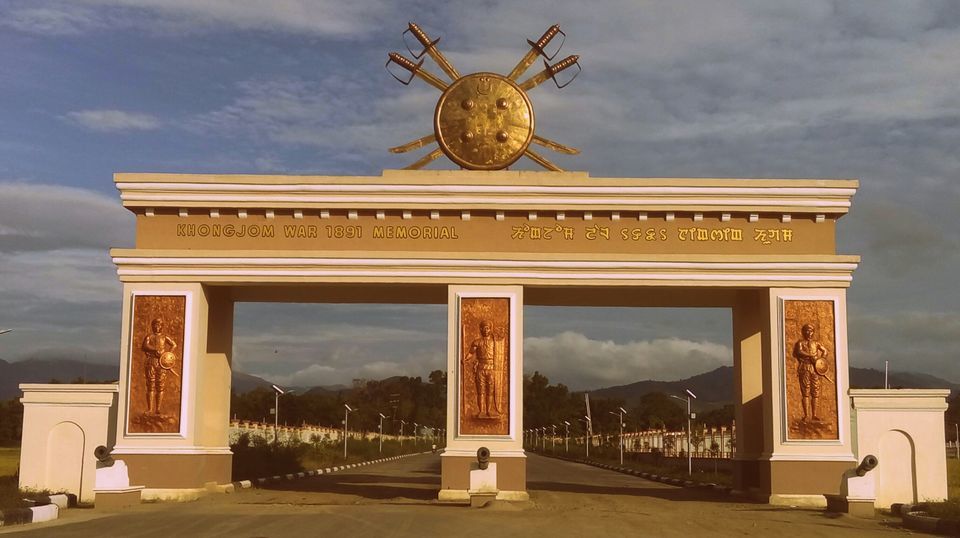 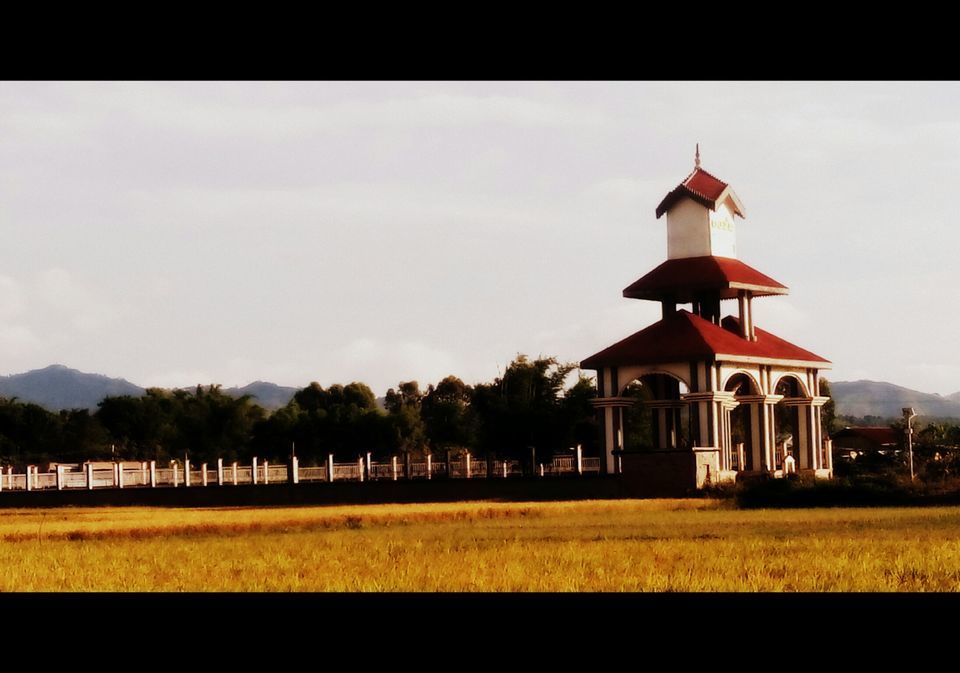 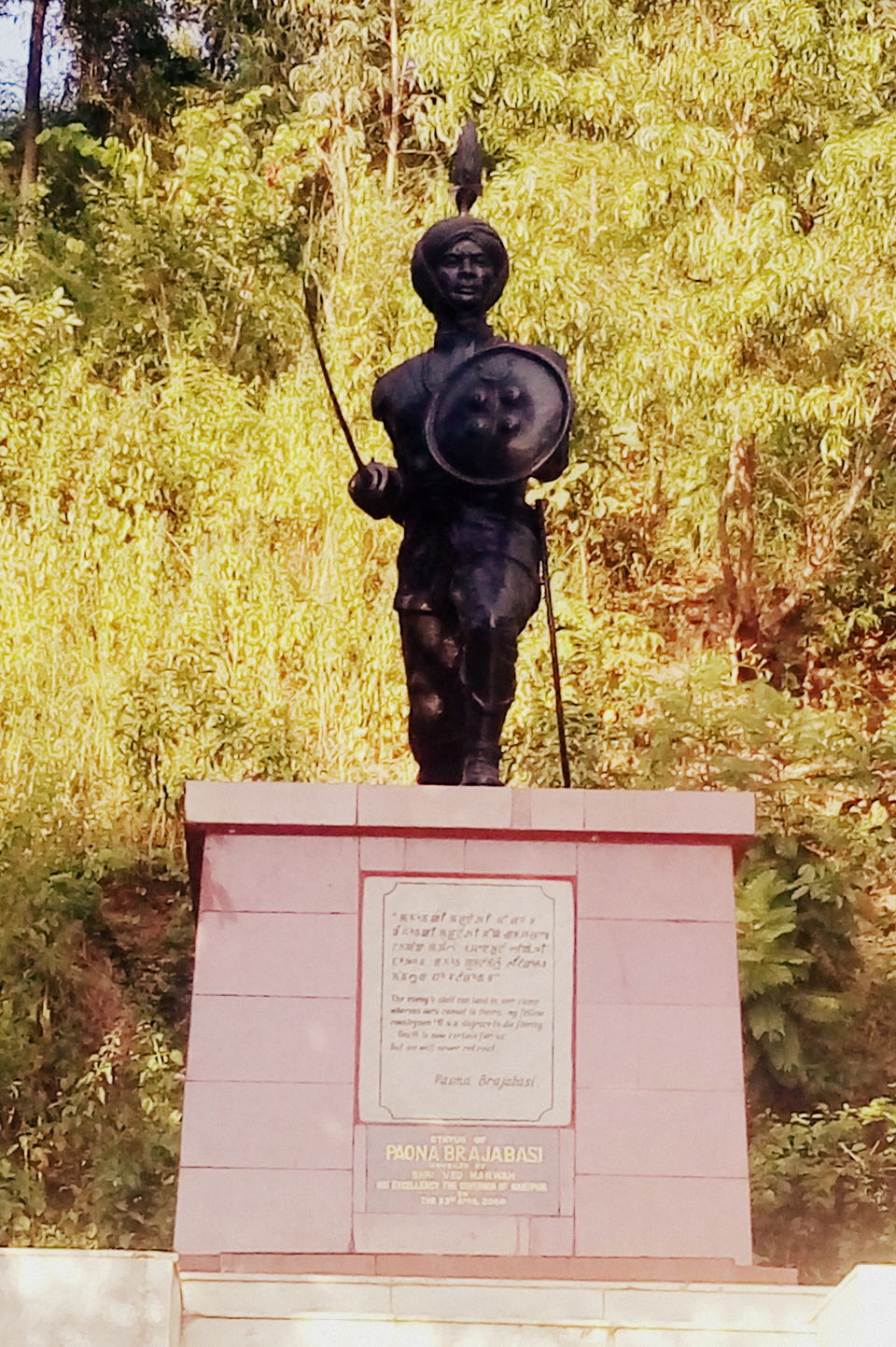 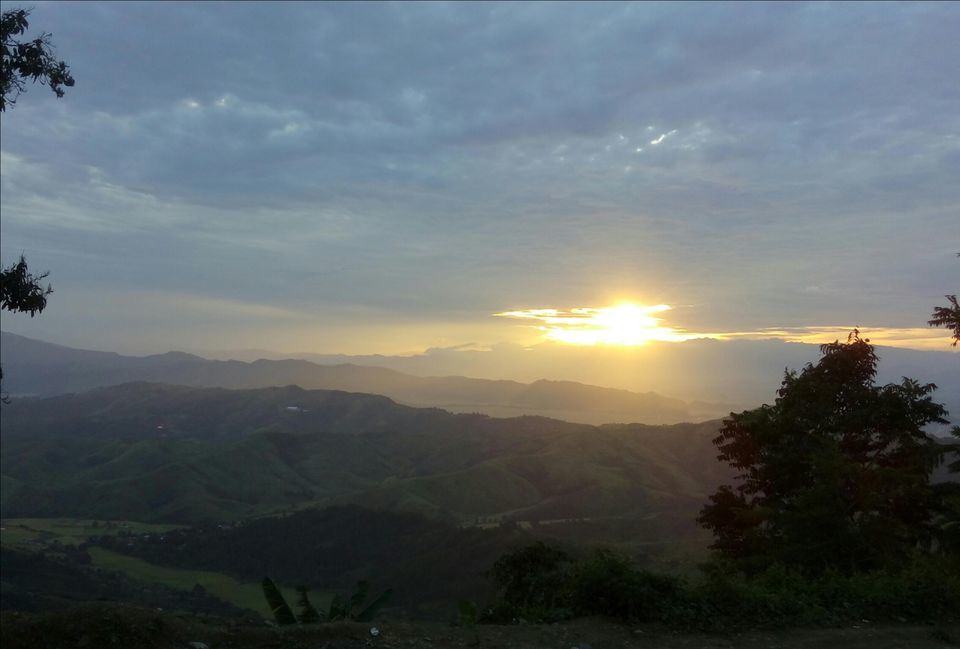 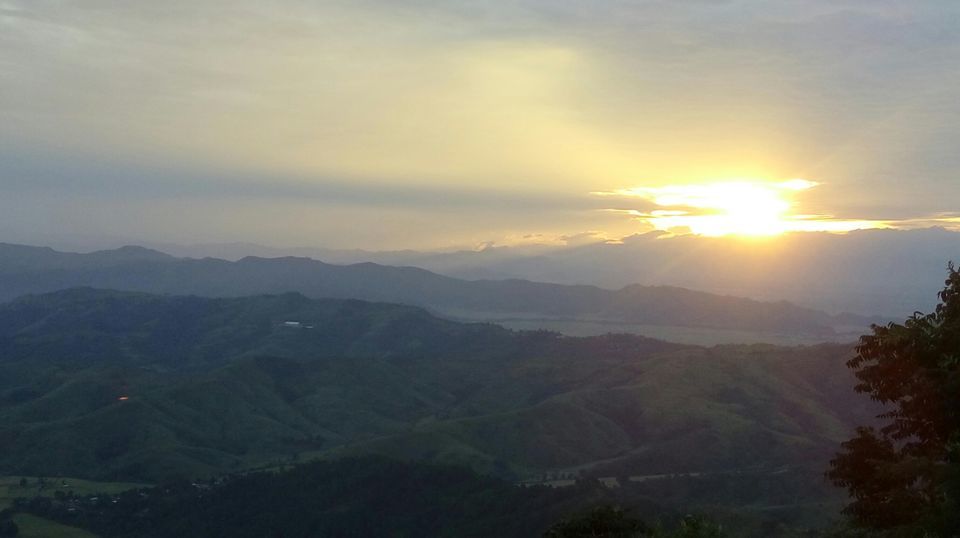 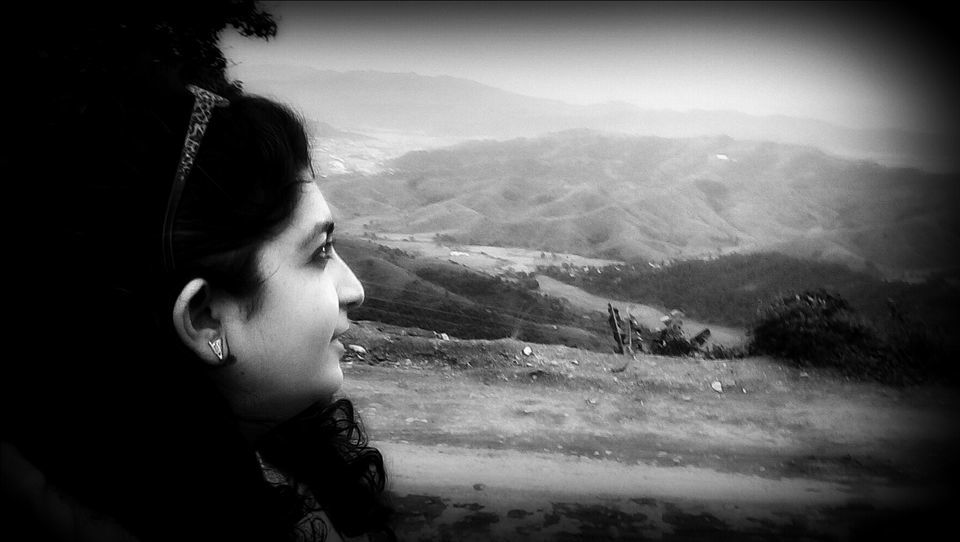 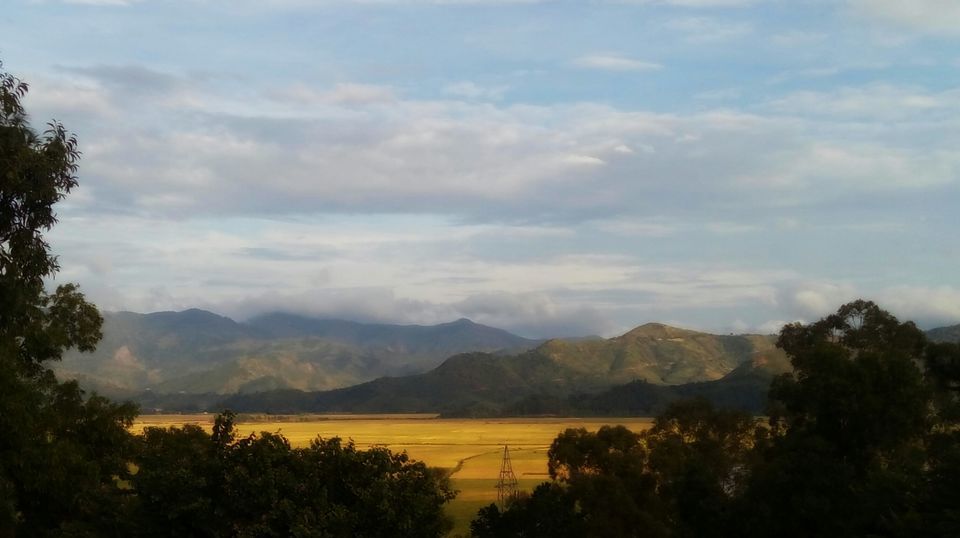 It started early as usual and I decided to spend some time on the roof as it had a wonderful view of the Koubru Hills. It's literal translation is elephant shaped and it is considered to be a sacred hill. The first place on our itinerary was the Keibul Lamjao National Park. This place is the home the Sangai, a unique species of deer.

It was a monstrous task trying to spot a Sangai but our patience was finally rewarded when a baby Sangai decided to emerge from its hiding.

It was almost afternoon when we reached our next stop at Moirang. This is the place where Subhash Chandra Bose started INA. There is a museum which traces the journey of INA from its inception to the disappearance of Netaji. The Manipuri people are extremely well versed about the work of Netaji and the INA. From Moirang we went to Loktak lake. No one visiting Manipur should miss the boat ride on Loktak. The boating closes early and the weather becomes quite chilly. So make sure you reach by 3pm.

The boat ride takes around an hour and be prepared to be ripped off your hard earned money. It cost us 1500 bucks. Luckily we were a group of 14 people so the per person cost was quite affordable.

The experience is indescribable. When the boat pushes it's way through the tiny shrubs and islands, it's quite enthralling. We even got off at a tiny island.

The day concluded with some shopping at a local village market. One can buy huge iron choppers and knives and wooden mortar & pestle (do pack them in your checked in luggage ????).

The final day of the trip deserves a special mention, so I have decided to dedicate a separate post on it... https://www.tripoto.com/trip/imphal-to-morey-a-journey-of-friendship-5a9fbcc14ab39

Have a great trip... 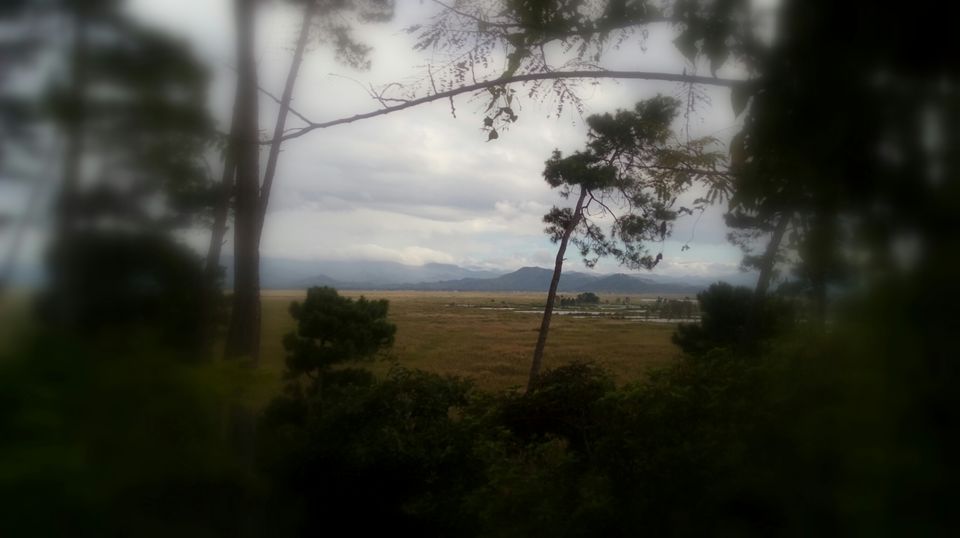 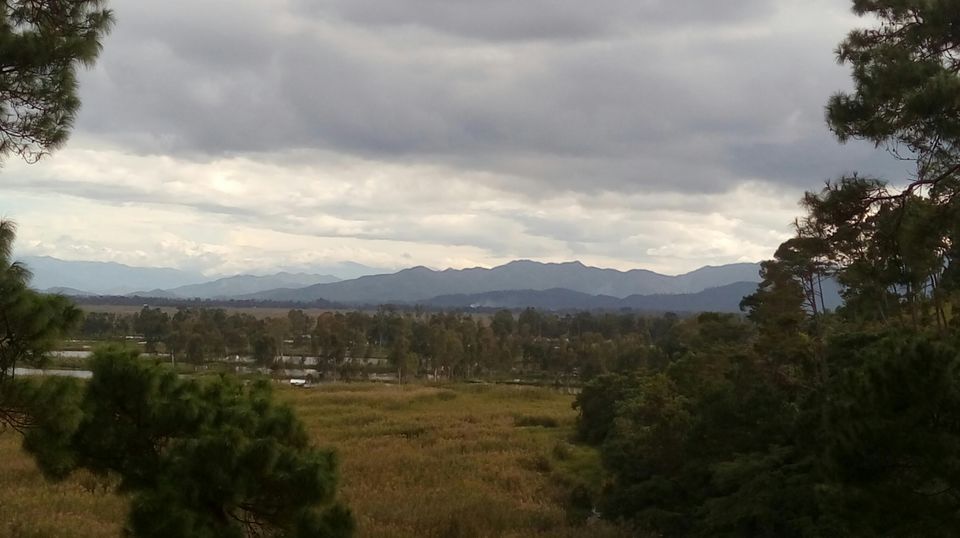 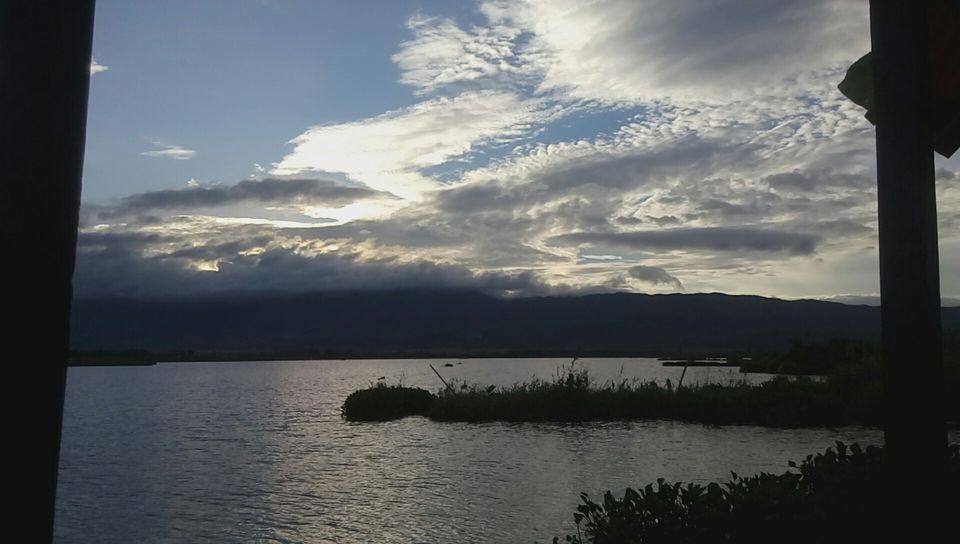 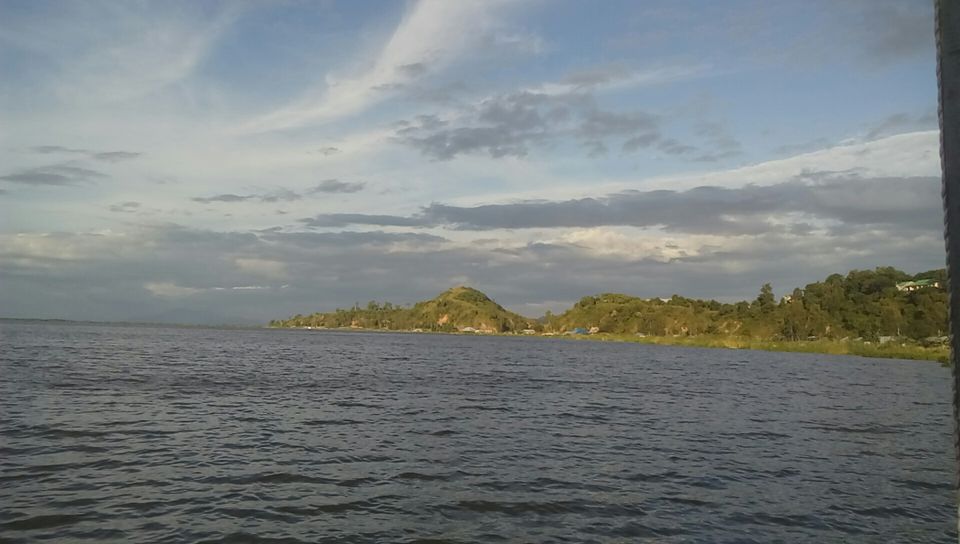 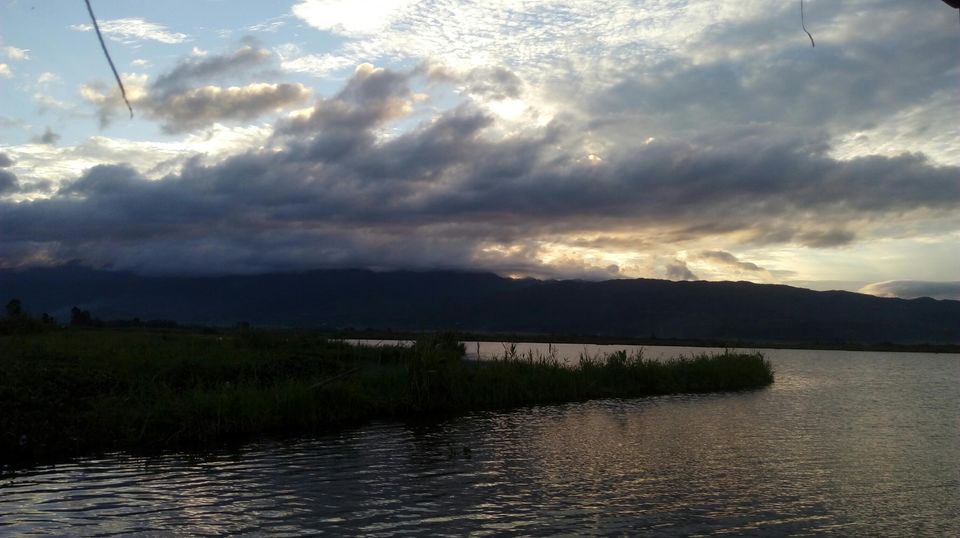 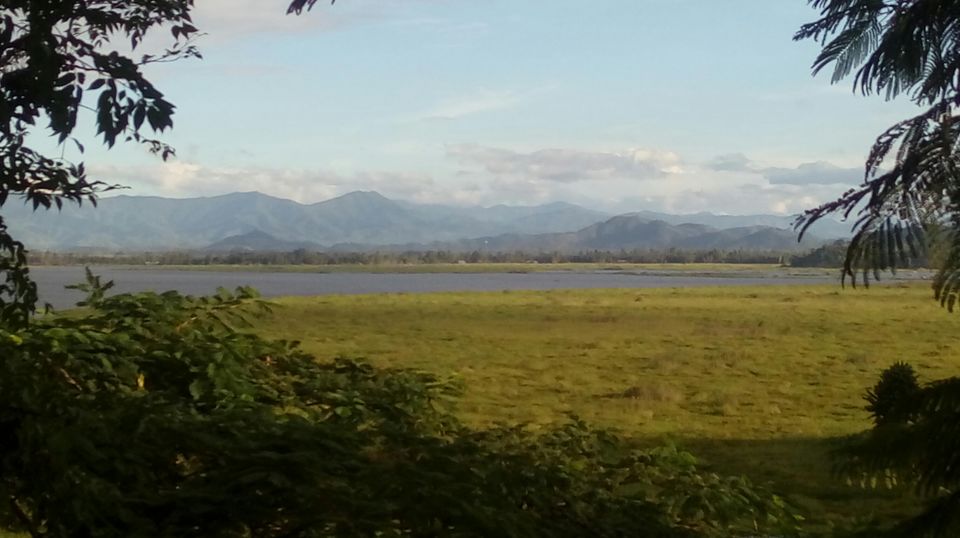 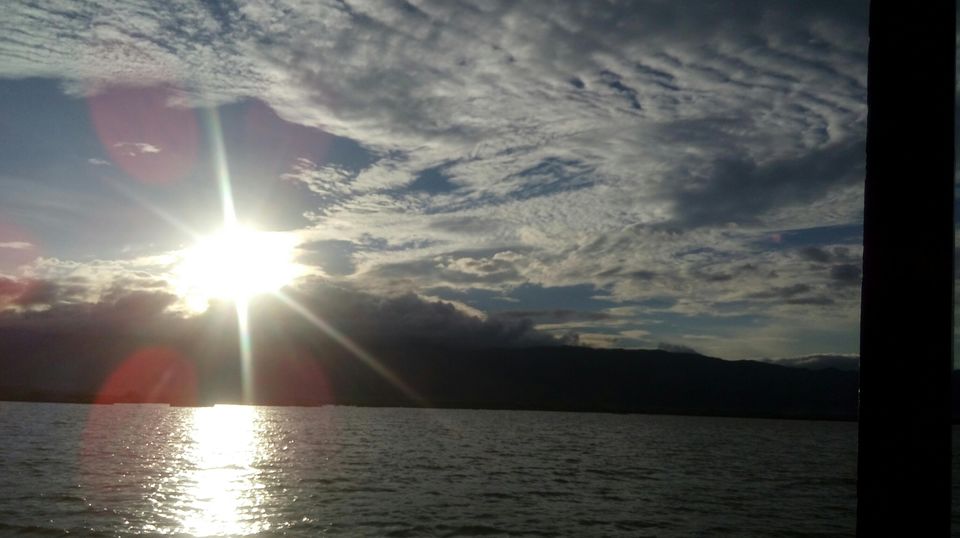