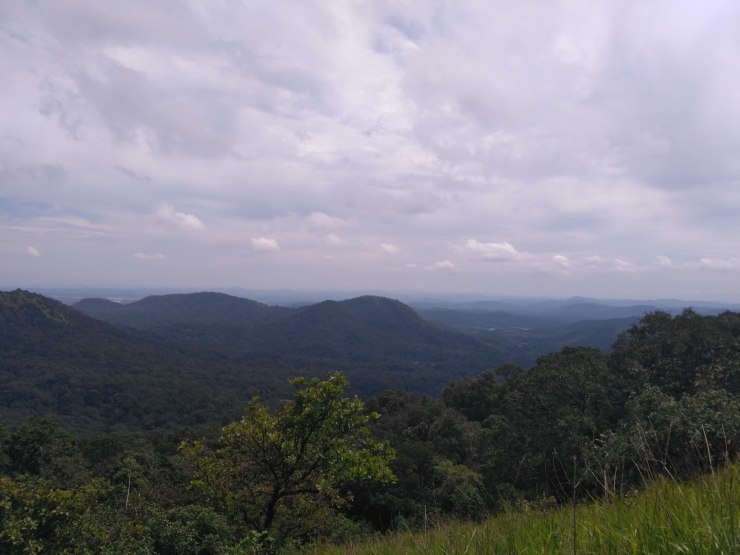 When the Bangalore Mountaineering Club website said that we'll have to scramble and stumble to finish the trek, I didn't think they meant that literally! I've been to treks before and each trek has been equally difficult and rewarding and so was this one. Kodachadri is a mountain peak with dense forests in the Western Ghats in South India. It is declared as a natural heritage site by Government Karnataka and it is 10th highest peak of Karnataka.

The trek was organized from 26th to 28th September. We were about 24 people. The pick up was at 9.30PM on Friday from the BMC office in Indiranagar.

The journey started in the night, so all I remember about the night is trying to find a good position to sleep without slipping down in my seat. But at dusk, all the green hills and forests and the water in the lakes made me smile. With a backache and a buzz in the head, we reached the Chitrakoot homestay. It was a basic dormitory homestay with clean washrooms and really good food. The best part of the homestay was the view of the lush green mountains.

Brush, eat, get ready, leave! We started our trek from about 3kms away from the homestay called the Jeep point for Kodachadri. We entered the forests. It was thick!! Trees and shrubs and flowers and mud and LEECHES. A hell lot of them. They would stick on to your shoes, your pants, your inner thigh, your hands. They'll even suck your blood even through your socks. But that's fine. Doesn't hurt. The trick is to keep moving. The more you're in motion, the less number of leeches would stick onto you. This went on for about 2hrs and you get used seeing these small creatures stuck on your body and then you're not scared of them after fighting them for about an hour.

Throughout the trek through the forest, you could hear water flowing and gushing and after your war with the leeches, you reach a point where you can see the water flowing next to you and after walking for a while, following the opposite direction of the flow, you reach a waterfall. This was the most beautiful reward one could get after the struggle through the woods. The water sprinkles on your sweaty face. I remember thinking I wouldn't regret dying under this waterfall.

We started walking again, climbing the rocks at 90 degrees. The trail led us to a grassland. A steep one! You keep climbing it for hours, and each time you look back, you could see the amazing scenery of the green, thick western ghats, the lakes and rivers, and deltas trapped between the mountains.

The final destination, the Kodachadri mountain, was another hour away and it is then when you see huge, humongous clouds hitting the mountains. You can't see anything but a white background with the cold clouds hitting your face.

On the way back, we took a jeep ride and man that was the ride of a lifetime. We were already 10 people sitting in the jeep, the road was rocky and the driver couldn't care less. I sat there holding my breath. All 10 of us would go wooooo, whenever the driver took a turn!

We finally reached the homestay, took a bath and had a great time with the people around (one of the best crowds I'd been with), talking and playing stupid games (if anyone knows how to play 2up-2down-1up1down, go screw yourself because it's a stupid game and I hate it).

The next day we went to a fort built by the Keladi dynasty. Spent about half an hour and left for Bengaluru. The way back was one of the most beautiful road sceneries I've ever seen. The trek was not an easy one but the trip, as a package, with the natural beauty of the western ghats and the amazing gang of people, was all worth it!

BMC organizes regular treks. You can check out their website for regular updates and pay online. The rest is taken care of by them.