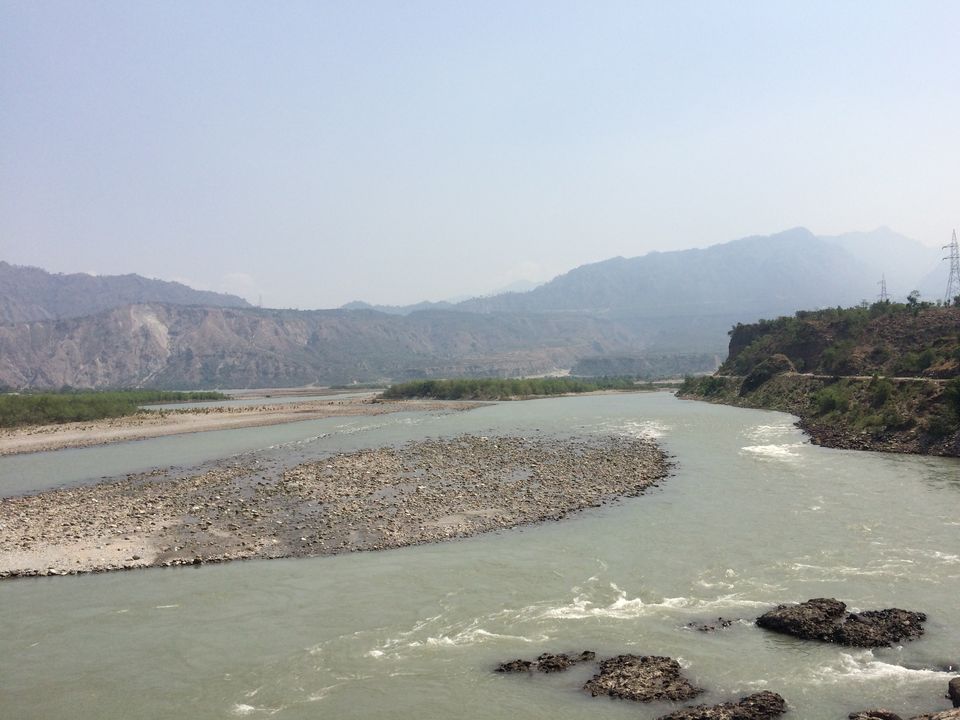 Darshan at Durbar: the Vaishno Devi Durbar is an Open One, Too!

This trip began in the late evening, and I must say at the outset that a night train journey is good in that we were rested enough when we disembarked from the Jammu Tawi Rajdhani (via Sonipat, Ludhiana, and Pathankot) and were received by one of the ever-attentive members of our cohort, who helped load our bags into the waiting gypsy. Away we went to Nagrota for a quick stop for ablutions, and then resumed our way towards Katra - the base town for walking up to the world-renowned Vaishno Devi shrine.

The journey from Jammu/Nagrota to Katra took just over an hour through a few tunnels, and woke me to the realization that in the seven-odd years since I had last visited Vaishno Devi, Katra has boomed into a veritable city.

Our driver veered away from the diesel fumes of the main road and we made our way to the helipad, maybe through one of the newer back roads - I can't remember more than one main road, but the previous trip was a long time ago.

For the chopper ride up to Sanjhi Chhat, the staff held my phone in the flight bag, ostensibly for security purposes. It is a very quick flight, lasting barely beyond a couple of airborne minutes - five at the most.

I got a good look at the instrument panel and engine-up procedure by virtue of being seated in the front, next to our very capable (incidentally Sikh) pilot. The transparent bubble afforded a great view of Katra and the mountain atop which rests Vaishno Devi (called Trikuta, for fact-chasers).

By 10 am, we were en route Bhawan, which is the name of the congregation of buildings and facilities that surround the actual shrine.Steeped in mythology, this ancient pilgrimage site is a wonder of management and facilitation, with none of the thronging hordes being denied their fleeting glimpse of the three pinds (stone outcrops) that signify the Goddesses Saraswati, Lakshmi and Kali.

The smoke from forest fires that had been raging for the past week hung low in the valley, thankfully well below Sanjhi Chhat, from where the walk to Bhawan is around two-and-a-half kilometers. This only represents the distance - the time depends on the crowd you encounter as the main complex of buildings begins. There are literally thousands of people there at any given time, including winters, but as I observed earlier, it is a task managed through sheer dedication by the authority that handles the pilgrimage site - the Shri Mata Vaishno Devi Shrine Board.

There are half a dozen "official" shops that sell the prasad (food as offering to the goddess) in various denominations to cater to the poorest and the richest devotees, as well as private shops brimming with souvenirs, dry fruit baskets, incense and all imaginable paraphernalia for worshiping Vaishno Devi - but it is my recommendation to buy how much ever you want of all this on your way back to Katra after the darshan - there is zero tolerance of leaving or offering such things while viewing (more accurately, glimpsing) the actual pinds.

The line for the darshan begins near the shops, with crowd management making it necessary to inch along the barricaded corridor. It is here that the chants of "Jai Mata Di" pick up pace and fervor, echoing through Bhawan and down into the valley at their most collaborative. There is a waiting time that varies according to the arti (consecration of the deity), taking between one (in our case) to five, even six hours during peak times.

After paying respects at the pind in the holy cave, the line makes a U-turn into the road leading back through Bhawan, passing the Hanuman idol on the right, just beyond the windows handing out the blessed coin and prasad. In the process of returning to where the shops sell souvenirs, there are gazebos and platforms jutting out of Trikuta, overlooking the valley below, serving the purposes of photo backdrops as well as resting points. Mum bought the 'official' silver coins for keepsakes from one of the authorized kiosks, before we trudged towards the Bhairo Nath temple.

Legend says that the goddess cut off his head when he bothered her incessantly, which landed at the spot where the current temple was built. There is a dense coagulation of tridents next to the fire pit at the miniscule temple, from where the sacred Bhairo ash is sourced. After the circumlocution of this temple, it was a relatively smooth ride down to Sanjhi Chhat, where we bought insipid machine-spout coffee to while away the time while awaiting to fly. After some delays due to the extant forest fires, our turn came and we descended to Katra via a short chopper ride.

Mom got walnuts and souvenir baskets for people back at home and office, and the Innova we were in made its way past Katra's crowded market and towards Reasi, where we were accommodated in quarters that had direct line-of-sight to Bhawan!

An evening walk provided an astonishing view of the Chenab River. Snaking its way down from the Lahaul & Spiti valleys (as Chandra and Bhaga rivers) where I had been two years ago, it carves a fertile way through the valley, and I was overjoyed on being offered the chance to raft on it the next morning! Strolling back, it was impossible not to be sidetracked by the creative use of boulders as canvases, with animals depicted basically but quite competently. Good to know that inherent creativity does not die out even in tough conditions. I can't help but be cryptic; it's a direct consequence of being patriotic.

As dusk drew on, the lights of the white buildings of Bhawan shone clearly defined against the dark mountain of Trikuta. I watched the Champions League final and Bale being the super-sub, before stepping out to breathe in the pristine wind, blowing with near-gale force. The sight of Bhawan drew the curtains on the first night of this family excursion.

I was buoyed by the anticipation of rafting in the clear, cold Chenab, and true to his word, our gracious host drove us down to the bridge where the rafting office was situated. After we clamored into an open gypsy roofed by the raft we were to ride the river on, the wizened driver took us down to the starting point downstream of an outlet channel of a hydroelectric project nearby. Putting away our phones into the dry bag held by the young guide, named Atul methinks, we shoved off and were instantly swept away by the current over novice-level rapids. I jumped off as soon as Atul gave the go-ahead in the broader flows after the rapids, and the slight hypothermic shock was short-lived but much appreciated, especially after having been in the plains for so much time, being roasted by the wind and sun.

Apparently, as I research only a little deeper about Reasi, I find that Chenab was held in pretty high esteem since Vedic times, and legend has it that its waters have "purifying" properties. So that's another wholly 'holy' dip done with fun, then!

Passing under the bridge, we pulled out where the same gypsy awaited, the patient old man having taken the road back. At the top of the bridge (reached quicker by climbing the crumbling steps from the riverbank than by riding the gypsy up the serpentine gravelly path), li'l sis sipped on freshly squeezed citrus juice from a roadside vendor while we waited for mum to catch up in the gypsy, loaded again with the raft as a canopy. Resuming our own drive, we took a peek at the tall Siyad (or Siyar, either way) Baba waterfall before returning to our accommodations for a spot of lunch.

Akhnoor was the next item on the travel plan, to which we were driven at a stately pace by a chatty person, who claimed to have taught the raft guide, Atul, the tricks of the trade. Examples of his rafting prowess included, among being an expert herb forager and truck driver in Assam, free diving into the depths of the Chenab. His banter passed the hour quite superfluously, and we only paused to click a smoldering tree - effect of the forest fires raging since quite a few days in the area.

I was reminded of the harsh sun of the plains when we arrived at our rooms, but by the time dusk rolled around, it was cool along the banks of Chenab, which flowed mere meters from where we had been put up. We took a longish walk, starting at an ancient cave used by the Pandavas of Mahabharat fame.

Crossing the steps along the river, we circled around Akhnoor Fort and climbed back up to the main road on the other side to our vehicle, which took us up the short path to the actual entrance of the fort. It is a protected monument, quite serene and with an expansive view of the river flowing behind it. After the obligatory family pics, we went to town - although not really, since it was the weekly closing day for the market. With time on our side (due to there being no market for mom to explore), we visited another temple as twilight fell, and also - surprise of the day - the relics of a Buddhist monastery right next to the Chenab, under the bridge (RHCP, but not at all what they had in mind). I have been writing about Buddhism on the job, and it was serendipitous.

The next morning, mom and li'l sis accompanied the significant other of our host to the market they had missed earlier, ostensibly looking for some local silver jewelry famed for its intricacy. I had a blissful morning-afternoon, sitting under the gazebo on the banks of the river and watching the ever changing panorama of clouds roll by.

When they returned, we loaded up our bags (now considerably heavier than what we had started out from home with, what with walnuts and Vaishno Devi prasad) into one vehicle and settled into the lead vehicle, heading for Jammu to board our train back to Delhi.

In Jammu, after visiting Annapurna's temple at Char Dham on the banks of the Tawi River, we were peckish and hot. Pahalwan's (or more accurately: Pahalwan di Hatti) is an eatery with the quintessential array of dishes and snacks and sweets and ice creams which has earned its reputation over more than half a century. I opted for the pav bhaji, while mum and sis got golgappe and rasmalai. Treating our escort to soft drinks and ice cream cones to ward off the unseasonable heat, mom used the time gained while they ate to shop for Kashmiri handicrafts and clothes. They dropped us at the railway station in good spirits, even going to the cherry seller and picking out the boxes that seemed freshest.

An overnight train ride later, we were back home and reeling from the heat. But memories are good because they make everything feel copacetic. Now I await mid-July, when I envision a trip to Keylong (at the very least). Onward, upward!