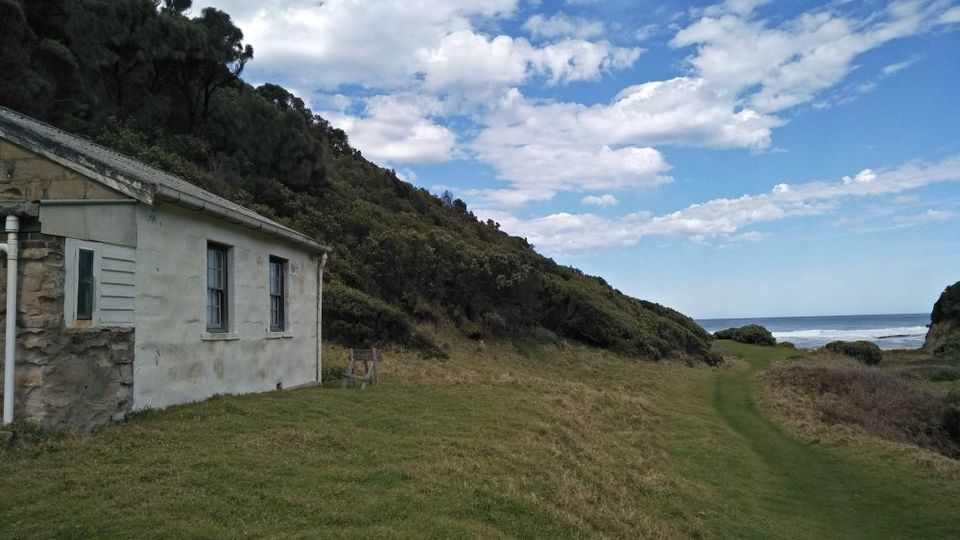 The story of a place is often lost in time, leaving us to drift through unaware of the past. Or we’re left with names and dates, that don’t really tell us very much.

Which is a shame, as there are lessons to be learned from the past, and behind every dry historical fact there’s often a genuine human story begging to be told. If only we knew who to talk to, and what questions to ask.

On the Great Ocean Walk, for example, when you finally reach the remote, and beautiful, Milanesia Beach, you may notice a little house nestled comfortably into the landscape. Just beyond the grasses at the edge of the beach, it’s white stone walls in stark contrast to the dark green forest rising steeply behind it.

And you may, with a little imagination, be able to see a family spending time there.

“…digging up worms in the sand, using them to catch trout, or eels that dad used to catch sharks while mum was off looking for crayfish. Everything cooked over a bonfire at night, and a game of cricket the next day before heading back to the homestead up the hill, where normal life resumed…”

Yes on looking at that picturesque little cottage, you can easily picture those idyllic family moments playing out in front of those cheery white walls. And you’d be right. That is what happened there, and still does.

What you’d never guess, however, is why that little house was built in the first place. You’d never guess that it was built by a father, to honour his son, who died on the battlefield at Gallipoli when he was only 22 years of age…

A young man goes to war

Eliot Gratton Wilson was working on a cattle station when the first world war began. He was 21, and, you can imagine, full of adventure, as only seven weeks later he signed up, enlisted in the Army and joined the 8th Australian Light Horse Regiment.

On the 25 February 1915 he boarded the Star Of Victoria and sailed to Egypt, and soon after his Regiment was sent to Gallipoli, where he led one of the first waves of attack in the infamous, and deadly, Battle of the Nek.

War correspondent and official Australian historian, Charles Bean, described the fact that anyone reached the enemy trenches in that initial assault, was a miracle. Yet two soldiers did exactly that, and one of them was Eliot.

‘On the other flank, near the seaward cliff, Lieutenant Wilson of the 8th [Light Horse Regiment] also reached the enemy’s trench and was seen sitting with his back to the parapet, beckoning to others to come to him. Shortly afterwards he was killed by a bomb from the Turkish line.’

Lieutenant Wilson died on the 7th August 1915, twelve days short of his 23rd birthday, in a battle that came to be known as ‘one of the bravest actions in the history of the war’. He died along with nine other officers in that charge, and by the time it was over, 154 of the 300 men in his Regiment were dead too. Gone too soon, every single one of them.

A father follows him

John Gratton Wilson was a doctor, politician, farmer, husband and a father, and he was 50 years old when he heard of his son’s death. And, while you never know what goes through a person’s mind when tragedy strikes, perhaps, the fact that he enlisted himself a couple of years later, even at that age, provides some indication of his mindset.

Doctor Wilson served, and survived two years of active duty in the war, and then returned home to build a humble beach house to honour his son. He went on to live a long and full life, passing on at the age of 85, and he’s buried in the Moonlight Heads Cemetery that you’ll also pass, on the Great Ocean Walk.

Now there’s no way you could know any of that, of course, and neither would we if it wasn’t for Georgie Beale, who spent her childhood running around Milanesia Beach, whose great grandfather built that little house, and who we’re very thankful to, for sharing her stories with us.

Growing up on the beach

Her family has lived there for six generations now. They’ve witnessed the changes through time, and often been active participants in the events that have shaped the landscape.

Growing up in a place like that, it seems, sends you in a certain direction in life. Georgie has spent most of her time in conservation and coastal management. She created education programs, bringing school groups down to the coast, showing them what there is to protect in this wild and rugged place.

And now she’s a guide for Auswalk. Taking people along the Great Ocean Walk, sharing the knowledge gained over a lifetime on the coast, and little bits of family history too.

“I feel like this is an accumulation of everything I’ve done, it’s just perfect and I love it.”

“The natural beauty of the place, and the ocean has a strong draw for me. Growing up we quickly learned to both read, and respect the ocean, as it could be very calm and soothing one minute, then wild and dangerous the next.”

Of course, it’s been a wild and dangerous ocean since long before Georgie came along. When sailing to Australia from the ‘old world’, you’d head south along the coast of Africa to begin with, perhaps re-provision in Cape Town, and then prepare yourself for a wild ride as you drop into the roaring 40s, and fly east towards Australia.

When you finally popped out of this highway of the sea, if you were heading toward the east coast you’d be faced with a choice. Go north of King Island, or keep it to your port side and approach the continent further along.

Heading north became known as threading the needle, and it’s a decision that sent 638 ships to the bottom of the sea, that we know of anyway. Indeed Matthew Flinders, who’d seen a fair few things in his day, said he had ‘seldom seen a more fearful section of coastline.’

The Great Ocean Walk takes you along this particularly brutal stretch of water, and there are reminders of the shipwrecks all along, from place names and cemeteries, to actual anchors sticking out of the rock.

Once again there are stories behind it all, and you’ll discover many of them on your way as you walk the 104kms from Apollo Bay on the East, to Port Campbell on the West.

And, surprise surprise, Georgie’s family were involved too… 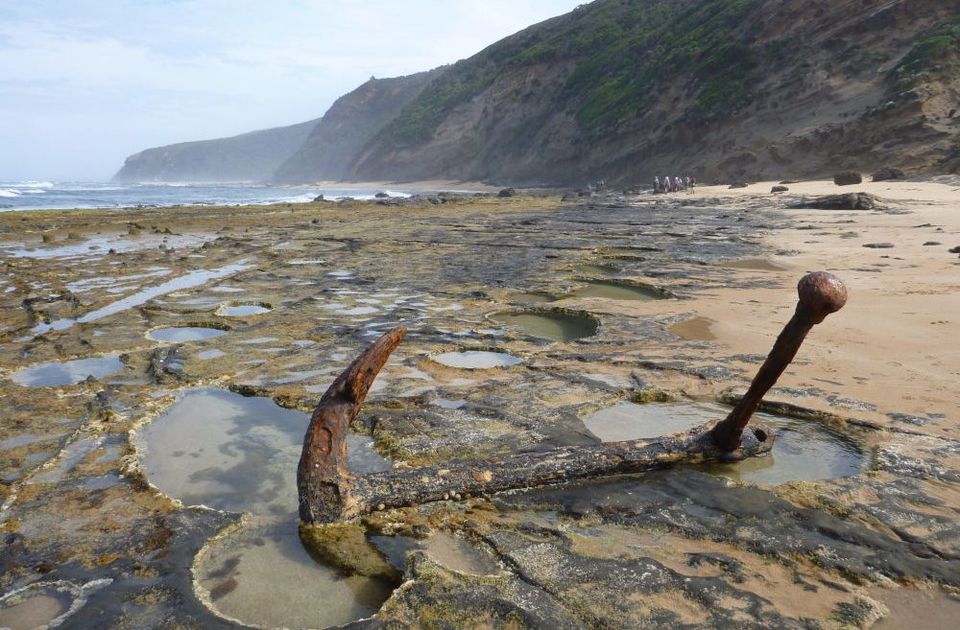 The wreck of the Fiji

The Fiji left Hamburg on the 22nd of May 1891, bound for Melbourne with a cargo of dynamite, whisky and 400 pianos – amongst other less interesting items. Almost four months later Captain Julius Gebauer was the first to swim ashore after she sank, just off Wreck Beach, ironically enough.

Georgie’s great, great grandparents, Christopher Hodgson and Emily Bowker, had obviously witnessed the event and were there to help rescue the survivors.

The good Captain took a shine to their daughter, Ada, and later on referred to her as ‘the girl who first set his heart aflutter’. Unfortunately his advances were not welcomed by the family, but he was infatuated with Ada, and it must have been reciprocated to some extent as they corresponded over the years, sending letters back and forth until the end.

Letters that Georgie still has to this day, a reminder that history is made by ordinary people, doing extraordinary things, driven by love, honour, duty, family and sacrifice. The same emotions that move us today, and, I think, help us connect to history, and truly bring it to life.

As Rudyard Kipling said, “If history were taught in the form of stories, it would never be forgotten.”. I couldn’t agree more.

Eventually, and not before time, someone decided it would be a good idea to build a lighthouse at Cape Otway, to try and prevent all of these disastrous shipwrecks that were happening on a frequent basis.

You’ll reach it only a few days after starting the walk, and to get there you’ll make your way through the Great Otway National Park, surrounded by some of the most magnificent trees on the planet, the enormous Eucalypts known as Mountain Ash.

Standing tall, and straight, the highest Mountain Ash reaches almost 100 metres into the sky, and only the Coastal Redwoods in Northern California can put them in the shade.

That might not always have been the case though. It’s possible a Mountain Ash was once the tallest tree in the world, but unfortunately, many of the true giants were cut down in the 1800s. They were so big, in fact, that many of their stumps were simply too big to remove. Keep an eye open, you might be able to spot one slowly disappearing into the undergrowth as you head to the Lighthouse… 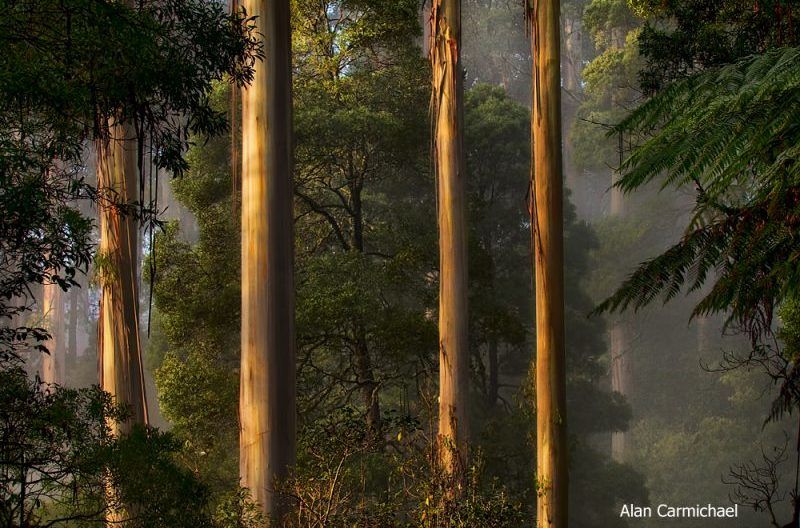 Built in 1848, the Cape Otway Lightstation was the second lighthouse built on the Australian mainland, and although it was decommissioned in 1994, it’s still the oldest working lighthouse on the mainland too.

There’s an interesting museum that’s worth a visit when you get there, however if you’re completing your trip anytime between June and September, nature puts on a much better show out to sea.

Cast your gaze to the horizon, and chances are you’ll see Southern Right Whales on their way to the warm waters of South Australia, and, if you’re lucky, Humpback whales breaching in the distance.

Now we couldn’t possibly leave the lighthouse, without more of Georgie’s family getting a look in. This time her grandparents, Bill and Ada Gratton Wilson, who were the first to take a car out there, following the Old Coach road that the bullock team used to take supplies out to the Cape.

They drove their Model T Ford on the rocky road, carrying a picnic, car chains and an axe, and when they made it there they were given a nights accommodation in the lighthouse for their troubles. 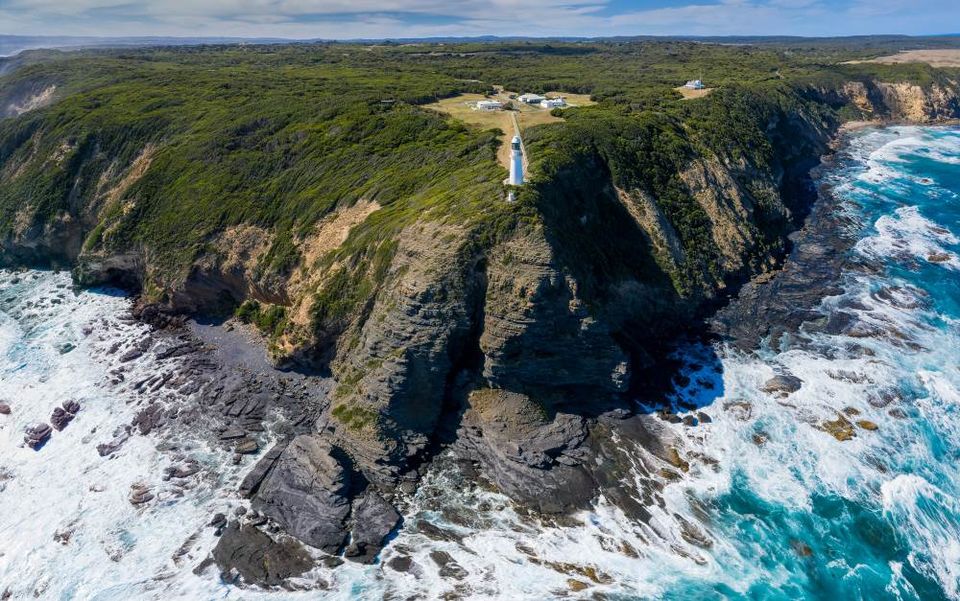 Of course, when you take a week or so to complete the Great Ocean Walk, most of the time you’ll be surrounded by a wild, enduring landscape that simply doesn’t care about history, or the people who once lived there.

A wide variety of native species continue to go about their business, and you’ll see koalas, kangaroos, echidnas, cockatoos, snakes, lizards, eagles, seals and penguins. The natural environment is the overriding wonder in this Great story of the Southern Ocean, but you’ll get to know that story when you walk here anyway.

Some other stories, well, you’d never find out otherwise, and then you’d never learn from the past. And the lesson for me, at least, rests in the walls of that little beach house.

All I can think of, is, what a lovely way to honour the fallen. Not with a memorial that you visit sombrely once a year, lay a wreath and pause for a minute’s silence.

Instead, build a house by a beach. Fill it with your family whenever you can, and spend a lifetime creating memories. A house that’s handed down over the generations – creating a space, in a beautiful place, for years to come. Surely that’s a legacy we’d all like to create.

Lives on forever in the walls of a beach house, and in the hearts of his family.

So the next time you walk past that idyllic setting, spare a thought for Eliot, and all the soldiers who gave their todays, for our tomorrow.