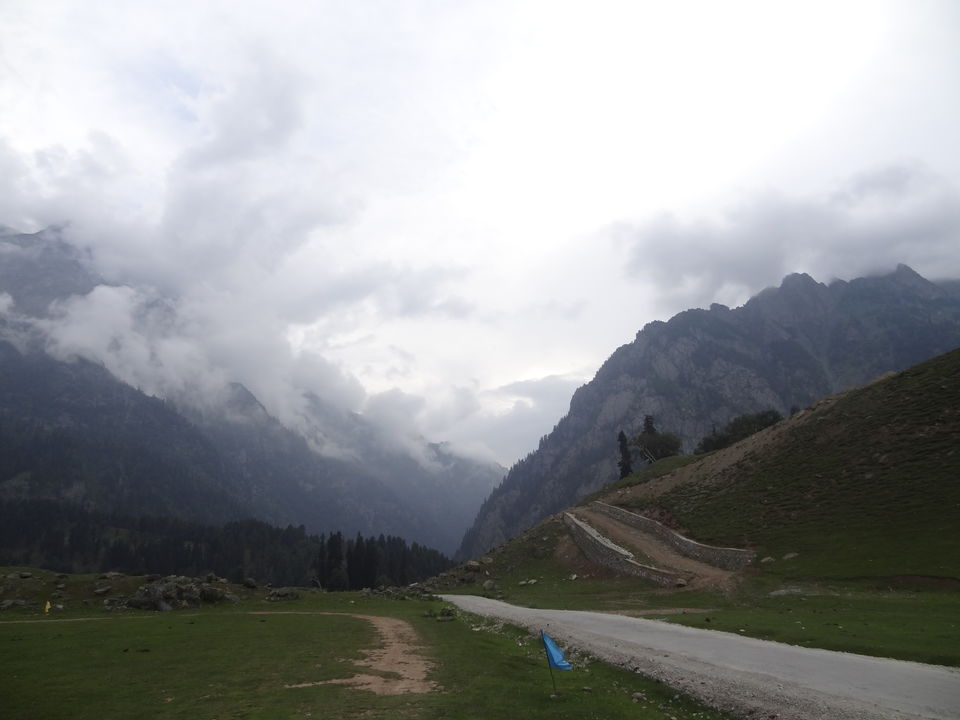 The conditions that day made me sick and I almost resolved to go to Srinagar and told my wife to make things ready for Srinagar. She was all upset and afraid, started telling me that, Travelling all the way from Chennai and returning for nothing is not an honest decision and needed me to re-think and told me to Speak to Jagdish.

I began examining the options, Helicopter tickets were called off and the only available option is trekking. No one committed on the Weather, that really confused me whether to go on trekking, because if we trapped on a rain in a hill it will be real grievous. No Signal in Cellphones that already collapsed our communication . No Hindi (We don't know Hindi, I sympathize a little piece and able to answer them with half-baked Hindi :) ). I could pick up plenty of "NO" and no sign of "YES" anywhere and thinking of calling Jagdish, got a yell from him.

He motivated me saying that not to make decisions with frustration as we went all the way from Chennai for Darshan and don't want to go with empty-handed and committed that he will make sure Darshan will happen and promised us that he will take the complete responsibility until we board the flight in Srinagar.

He also added, not to worry much about the weather and needed me to come to Baltal Army camp by breaking the Package. He gave us Confidence that he would arrange for trekking through Baltal and said that the weather report for the next day has no possibility of rain. Initially, we don't know what to do next, but the only person that I can Trust and communicate (in Tamil & English) is him. I was about to confirm that, we will be ready by 7.30 PM, we lost the signal in the Cellphone.

The following round of confusions started from here, when I said the car driver that, I am going to Army Base Camp by breaking the package immediately and will be withdrawing it by tomorrow afternoon, he triggered the confusions through the hotels folks saying, they will arrange for trekking through the same route and charge will be approximately 1900 per person for Pony and tried to win over me in whatever manner possible, but I was not convinced and the batch doesn't work with them.

I got to hotel folks to pronounce that, We will be leaving to Baltal Basecamp, before I complete my statement!!!!, They started telling me, it is VERY dangerous :) to travel after 6.30 PM in the valley and began telling me the tales of the Accidental death which happened on Baltal route in late day. Just Imagine my situation as I can't even discuss all these information with my wife :)

After hearning all these scary stories :) , My inner sense said, I actually don't have options nor choices other than to go to Baltal Army base Camp. With the landline from the hotel, I confirmed Jagdish, saying that we will be ready by 7.30 PM. The toughest issue in that evening was Network, we faced a hell lot of Network issues in Airtel. Whenever we wanted to make calls, "NO SIGNAL". !!!!!!!!! .

As we wore out our package in the middle, the Travels Car driver didn't co-operate and said he will not drop us in Army Camp as it is not included in the package. I stated, I will pay him separately, but he was not convinced (I actually don't know whether he was not convinced or he doesn't interpret the language :) ).

We needed to get to our own decisions directly, but wanted to try out all the available options, whether travels can help in anyway at-least to drop us in Baltal Army camp?. I attempted to reach the Travels through the land line telephone, but my bad, none of them picked the phone, fortunately, if someone picks the phone, they speak only HINDI and they WILL Make Sure they don't take heed what I speak :) ... I laughed to myself and realized all the doors closed and our friend's advice is the only choice and no other way for Amarnath Darshan.

I called Jagdish and updated him all the scary stories and the driver's excellent co-operation on dropping us in Baltal Army Camp :) .