A day trip to the ancient ruins of Jerash, Jordan

On my trip to Jordan in 2012, I scheduled a day to go see the ancient Roman Ruins of Jerash near Amman. This was just a day trip from Amman, the capital city of Jordan on our last day of sightseeing before heading to Egypt, but it became one of the highlights of the entire trip.

There are a lot of things to see in Jordan, but Jerash is one of those places that will be the first thing I will recall every time I think of Jordan. The drive from Amman to Jerash was simply amazing. The cab driver we’d hired for the day whisked us away from the bustling city center, and within minutes the desert had turned to beautiful, lush hills blanketed with olive vineyards — I felt like I’d been transported from Arabia to wine country in California or Italy.

I reached there to find a crowd of schoolgirls who had come to explore the ruins themselves. We arrived to hordes of tour buses clogging the entrance. Once we paid for our tickets and got past the vendors, we made our way through the crowds of schoolgirls and onto the sights.

We didn’t make it very far, however, before I was accosted by a mob of Jordanian schoolgirls. By that point I was somewhat accustomed to being stared at constantly in Amman (I’m blonde, obviously not from there, and I didn’t cover my hair), but I was completely unprepared for what happened next. A group of preteen and teen girls (clearly there on a school field trip) all clad in identical green school uniform jackets gathered around me. One shyly approached me and asked, in English, if she could take a picture with me. One, and then another, and then another, until every single girl there had a photo with me in their flip phones.

THIS is why I travel. You never know what kind of amazing experiences you’re going to have when you step outside your comfort zone. I loved seeing how comfortable these girls seemed in their own skin, how much fun they were able to have just goofing off and acting like normal kids. You know, we’re really not that different.

Jerash is a relatively small city with one main attraction: its Roman ruins. After my encounter with the school girls, we set out to explore the ruins of this city. After we felt we’d seen all the ancient crumbling Roman architecture there was to see (which is a lot more than I thought I’d see in Jordan!), we decided to check out the Colosseum. After a few minutes of taking in the scenery, we heard someone beating on a drum. Within minutes, everyone was on their feet (including those school girls). It was a random dance party, flash mob-style, right there in an ancient Colosseum in Jordan. Everyone was having a total blast, making their own fun, laughing and dancing with their friends. It was awesome to experience it.Jerash is just a day trip and is one of the key historical places to visit in Jordan. 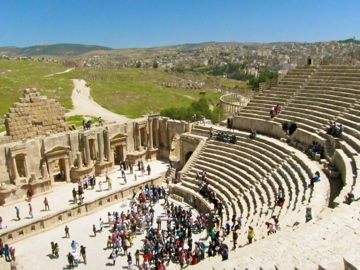