A 3 day ride in the land of Kodavas:-Coorg 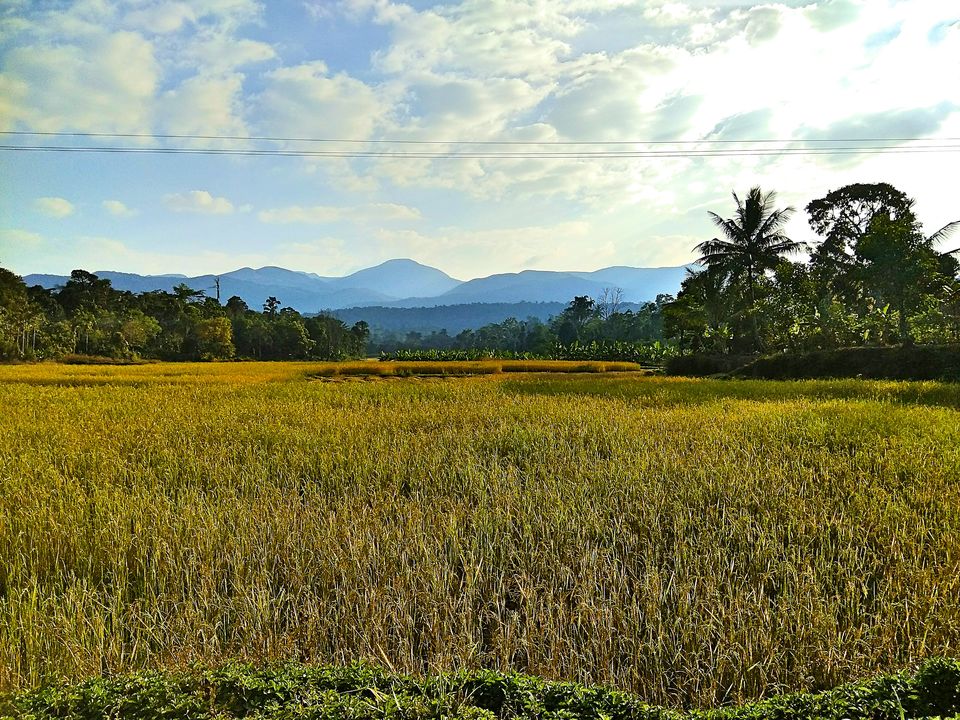 As soon as someone have a 3 day leave and a 10k cash and a feel of travelling and then if you are from Bangalore, believe me all of us will plan for Coorg or Kodagu which is 260 kms from Namma Bengaluru. So this was my plan for the year end and had to finish the year in a good way.

The day started by boarding a bus to Coorg from Mysore around 8.30 a.m. in a KSRTC bus. The distance between Mysore and Coorg is 110 kms odd and is a very scenic road after Hunsur. By the time we reached coorg it was 12.00 p.m. and the place was humid and hot even though it was a year end. But the place welcomed us with hundreds of tourist vehicles all over who had also come to enjoy their Christmas weekend in the hill station. After checking in to our hotel Comforts Inn, the next thing to do was to collect our bike which we had booked online for 3 days rent from Royal Brothers. These people provide you the best bikes for rent and you can effortlessly roam around Kodagu by spending less and on your own you can have a lot of time saved for yourselves.

As it was almost nearing 3.30 p.m. we headed towards Talakaveri or Bhagamandala to see the place of birth of river Kaveri. This place is situated in the Brahmagiri range and is located almost 40 odd kms from the Kodagu headquarters. The roads are awesome and are too serpentine, but gives an immense riding pleasure when you cruise over them. The time was 5.00 p.m. when we reached the place and the maha Aarti was performed by the main priest for the river Kaveri seeking her blessings and this ritual took place for half an hour and was the last Pooja of the day. The entire premises of this place was cool and devotees were busy collecting the river water from its origin to carry for their homes as they say the water here purifies sins. This place is around 1276 meter high from the sea level.

Once done with this place we came down the hill to visit the Bhaganeshwara temple, which is situated on the banks of the sangam where the river Kaveri is joined by other two tributaries Kannike and Sujyoti River. It was already 7 in the evening and even here the last ritual of the day was performed. The entire premises is filled by various temples of Ganesha and Subramanya and other Gods with breath taking gopuras built for each temple. The return ride from Bhagamandala to Coorg was in complete dark as the roads are not lit all the way till Kodagu and had to be too cautious on the curves. But the night ride was awesome for 30 odd kms. Later visited a local church to see the Christmas celebrations. After a long pain staking day it was time to hit the bed directly.

This was a day actually we were looking forward to, as we had our visit planned to the elephant camp. After a pretty normal breakfast at the hotel we left on our way towards the Dubare Elephant camp. Around 20 odd kms in distance from Coorg, this camp is on the first junction which comes once you cross Suntikoppa on the highway towards Bangalore. After a deviation to right one has to ride around 5 to 6 kms to reach the banks of river Kaveri where on the other side of the banks is the camp located. The place had turned itself into a mini city that morning with thousands of tourists, thanks to the long Christmas weekend. Usually one has to get on to a small motor boat which carries around 20 odd people in one go to the other side of the banks of river Kaveri, where the camp is situated. But due to less rainfall the river was flowing mild and also was not that deep as it flows during monsoon, which paved a way to other hundreds to people to cross it by walking on the small boulders which were now seen easily due to less water. We decided ourselves to walk the same way rather than waiting on an endless line to board a motorboat. This turned out to be a mini adventure for the people who were crossing river on legs, as it was slippery and few also had a dip into water occasionally. It took all sweet time of 40 minutes to cross the flowing river watching many people doing circus on the way back also. Once we reached the foot of the camp, we were welcomed by a big tusker who was on his way to get a bath at the river. People come with a wish of giving bath to these elephants here with their kids and believe me one should not miss their visit to the camp if they are accompanied with their kids. After having a detailed look of how the big creatures are fed and trained and maintained, we had a look on the way they were made to take a dip in the river also. This camp is an important base for the elephants of Karnataka forest department. Even the Elephants who participate in world famous Mysore Dasara are trained here. The return was also the same way crossing the flowing river.

The next visit was to Cauvery Nisargadhama which is also in a small distance after the camp and is located adjacent to the highway itself. This place was also not less in tourists compared to the camp, and it took us all one hour to roam around the dhama which is cool due to the numerous forest reserve and also Bamboo grown all over the place. There were few kids playing Zip Line also in the center of the dhama.

Done with the two attractions our next visit was to the Bylakuppe Tibetan monastery, the second largest Tibetan settlement outside the Tibet in the World. This was a bit less crowded compared to the other places as it was afternoon and was too humid outside. The monastery is free of cost to enter and houses Namdroling Nyingmapa and Tashilunpo monastery and few other to name within the complex. The entire complex is built in the style of Chinese architecture around 1961. We could witness prayers being prayed by the Buddhist monks within few temples which are restricted for the tourists to enter. The main attraction in this place are the three huge Buddha statues inside the golden temple at the middle of the Altar. The statues are of Lord Buddha, Guru Padmasambhava, also known as Guru Rinpoche, and Buddha Amitayus. The statue of Lord Buddha at the center is 60 ft tall and the other two statues are 58 ft each. After having a good one hour roaming around the premises and witnessing day to day activities of Buddhist monks around we headed to a local restaurant to have our lunch.

After two hours of rest our next destination was to the famous Raja seat, which was once a King’s place to enjoy a beautiful sunset sitting on the edge of a cliff facing towards the dense high and low forest which is vast. This place was literally flocked by tourists who had come to witness sunset from different places. Here there is an artificial water fountain which is played with songs for half an hour in the evening after the sunset and is good enough to pass the time laying around on the grass in the park complex. You also have a toy train adjacent to the park which runs for 10 rupees per head.

After an evening basking around in the cool breeze and making our way from the packed tourists in every nook and corner of Kodagu we headed to the calm and tourist free spot in the entrance of Kodagu. This was a café called Big Cup Café, which was completely free from tourists and also offered varieties of snacks and coffee variants from authentic Malnad coffee and tea to Cappuccino’s we get in Bangalore. The unique style of this café attracted me in the morning only when we decided to spend a while here. The big coffee mug placed outside the café with a plant in it attracts you in the first sight itself.

Being the last day of our stay in Coorg, as per the prior plan we had a long ride awaiting this day to visit one more famous water fall in Madikeri, The Irupu or Iruppu falls. This falls is located over 80 kms from the headquarters of Madikeri and can be reached via Gonikoppa and Virajpet. Coorg already known for its scenic and lush green beauty, this stretch of distance gives you the best drive with greenery all over. We left Coorg by 8.30 a.m. as it was a long ride with serpentine roads all over the stretch. The first town you get after crossing Madikeri is Virajpet, which is also one of the main towns in Coorg and also known for its tea estates. After having a small break for tea here, we resumed our ride on road for the next destination Gonikoppa. After gonikoppa, it was Kutta road and then sirimangala from where it is other 10 kms to reach the Brahmagiri Sanctuary. This road also heads to one of the famous and major national parks of India, The Nagarahole national park which is 25 kms far from the deviation towards Irupu falls. The falls is located in Southern Kodagu and also borders Wayanad district of Kerala.

The falls is around 52 meter in height and has two distinct water gorges forming from the top. It is also called as Lakshmana Theertha as according to mythology the falls were created by the arrow hit by Lakshmana on the brahmagiri range to quench the thirst of Lord Rama on their forest trial towards Lanka. From the parking space one has to walk and hike through the forest trail of around a kilometer to reach the base of the falls. The trial is itself is so awesome that the chirping of birds is continuous throughout and before you even get back to your normal sense you will be in front of a scenic waterfalls. The amount of water was less due to less rainfall, but still it had attracted a decent number of tourists. Usually the number of tourists will be less here compared to Coorg, as it is far and would demand an entire day to and fro Coorg. The water is so pure and cool and is also believed to purify your sins as per Mythology. We were bit relieved to see few tourists compared to the last two days where we witnessed thousands of them in all the places. We spent around 90 minutes near the water falls and then headed back to Kodagu by 1.00 p.m.

Reached Kodagu by 4.00 p.m. with a lunch break in between in Virajpet, and had a brief rest before heading to Abbe falls which is hardly 06 kms from the headquarters. Later in the evening we visited Omkareshwara temple also. After an hour flocking around the temple premises we returned our bike to Royal Brothers and then packed ourselves back to Bangalore.

All over it was a great ride for 3 days in and around Coorg and the only drawback was the number of tourists we had to come across. Apart from that this was a great way to end the year.