Hampi - The Ancient City That Speaks 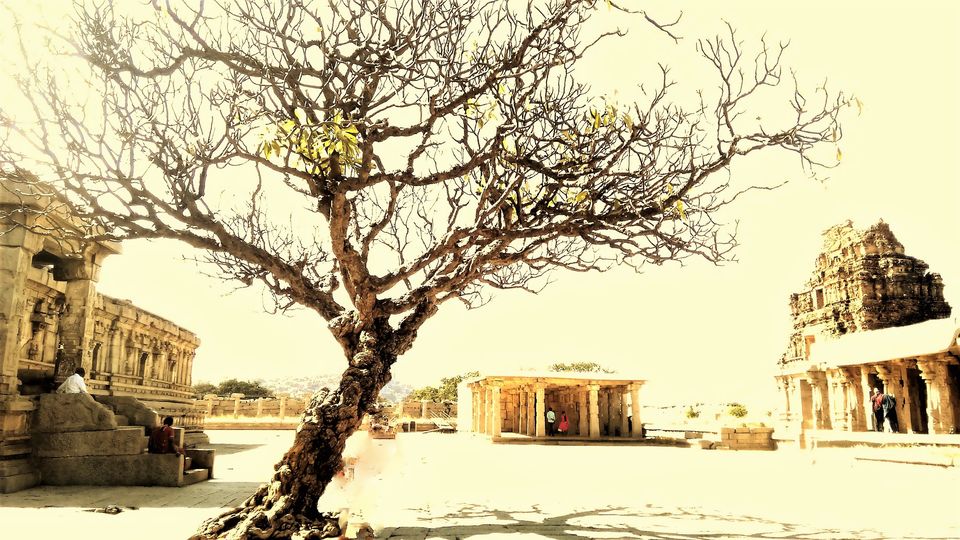 The burning morning sun and the dust agitated by the passing vehicles made me think if I should have listened to my roommate.

“There is nothing in Hampi. What will you do there?”, She had said.

The only bus stand in Hampi seemed like a parking place for private cars. Rows of temporary shops awaited for their customers desperately. Auto-drivers and locals selling small items came like a swarm of bees towards the honey combs except that we weren’t honey combs — we were tourists—new to the place and almost completely lost at where to begin.

How I Reached Hampi From Bangalore

I booked a bus from Yatra.com, but I suggest you book a bus from KSRTC Official website There may be a price difference of 200-300, but the service is comparatively better and the buses are always on time.

After a 7-hour journey from Bangalore in the rickety sleeper claiming to be a multi-axle, the bus dropped us at Hospete. I quarrelled with the driver as I had booked the bus till Hampi, and he claimed that the private buses weren’t allowed in there. Only when he assured me that he will provide an auto service at his own cost did I retreat.

No Private buses are allowed in Hampi. You either take a share auto or a local bus from Hospete Bus Stand to Hampi.

Always book a multi-axle bus for a comfortable journey, else you will feel each bump on the road reverberate through your body.

Luckily, I met my friends at the major bus depot at Hospete. From there, we took a local bus to Hampi, which took us another 30 minutes.

City That Once Flourished

Hampi—an ancient city in ruins—stood before us, silently shouting of its glorious past. People still live there but not as they used to in the 15th and 16th century or even before. There are monumental structures that stand tall and sturdy through the weathering of time, though nobody stays in them. Hampi was one of the richest cities, and a center of trade of horses, gems and arts and culture. If you ever heard of Tenali Raman, and the court of Krishnadevaraya, it was this place where the intelligent Brahmin impressed the king with his witty answers. Under the rein of the generous king, the Hampi, the then city of Vijayanagar under the majestic empire of the same name rose to the zenith.

Hampi is situated in a semi-arid area of northern Karnataka. All you can see in your vicinity are stretches of huge chunks of rocks. Little vegetation has turned the air dusty, and the sunlight scorches mercilessly through the already dwindling shade. The only relief to the eyes is the water of Tungabhadra River that traces a snake-like path between lower rocky terrains. On either side of the river, the intricately cut out rocks have astoundingly taken the forms of temples, gateways, deities, animals, and other innumerable structures. These designs and carvings emanate and highlight the cultures and traditions that would have otherwise been buried with time.

After walking for a while, the sun felt warmer and took a toll on our imagination, wavering it to the wildest corners. We guessed that Hampi got its name from its range of hills that looked like the hump of a camel. Hampi was originally called as Pampi, which was the old name of Tungabhadra River.

Centuries ago this place would have been pleasant—fed by the swollen river, surrounded by lush with the days much cooler and the sun not so harsh on the people who belonged here. Children would have played amid the rows of tall stone pillars, engraved with pictorial descriptions of wars, horses, courtesans and deities. Women clad in sarees, would visit Virupaksha temple for early morning prayers, with a plate full hibiscus, banana and coconut to be offered to Lord Shiva. Horsemen would stand patiently for the traders, watching sturdy bunch of horses to be bought and sold.

We started with one of the giant structures visible around. The Virupaksha temple—which was a prominent landmark in Pampi back in the 15th-16th century—has two huge courtyards with a giant gateway connecting them. This nine-storey entrance gate of the temple was a master stonework of constituting of sculptures at every level. Few of these figures that stood high displayed eroticism similar to the monuments of Khujrao in Madhya Pradesh. It could have offend any person with staunch believes and an orthodox approach. From a second perspective and the claims of the history and the culture of the place, fertility was considered auspicious and not derogatory .

One must walk barefoot inside the temple and pay at the ticket counter near the entrance if they intend to take photographs. The open temple courtyard has pillars on the both sides of the walkway. On the left, they had kept an elephant to amuse visitors. She was trained to collect money from them and pat their heads with her trunk, as a form of blessing. I lost the count of people who took selfies with the elephant, who was mindlessly munching on the eatables they provided to her. I stood there for long and waited for the people to disperse. I stared at the she-elephant and conveyed to her, how sorry I felt for her, to be away from home, here, surrounded by some silly people, asking for her blessings after enslaving her. I thought she might feel grateful that she is not their God—'They' would have faced torments if 'They' lived among us. It was as if she understood me and brought her head closer towards me. I gave the 34-year-old a gentle pat of assurance and wished her a good life ahead.

The temple hall had stone-carved lions on the outer side of its pillars. One could look up to find the ceilings display rows of beautiful murals—it reminded me of the typical South-Asian gods and goddesses with slender eyes and sensual gestures.

The Shiv-Ling, confined to a small space inside the main enclosure, was barely visible. The walking area around the temple had its roof covered with rock slabs, which blocked the sunlight. It was quite dark and cold inside. While circumventing the temple, when we switched on our cell phone flashlights, we noticed hundreds of tiny bats hanging quietly on the ceiling of the walkway without our knowledge. In fret, we quickly circled the temple in the dim light coming from the cracks between the rocks slabs above us and hurriedly came out from the other end.

The bright sunlight welcomed us again. There were people and monkeys everywhere. The former offered prayers to the deities at the functional temple whereas the latter got all the blessings in the form of food. We walked further to reach an open space and found a few rock statues silently basking in the sun. There was also to an algae-struck pond, probably a reservoir but, thankfully, it was devoid of any human waste. The rear exit of the temple courtyard opened to a mini market along the Tunghabadhra River. A few people—mostly men—went down the step-way to take a dip in the shallow and rocky waters. Not so far from the river stood few changing rooms for the ease of the visitors though the men didn’t seem to make use of them.

Slightly tired, we sat there under the shade and waited for the time to pass and the sun to relax. Fruits were readily available along with things like jewellery and decorative items —it was sold by the locals along the roadside. I went past them like a raven attracted to their glitter. But, then, I wanted to meet the elephant again and traced my own steps back.