Mysore- The City of Palaces 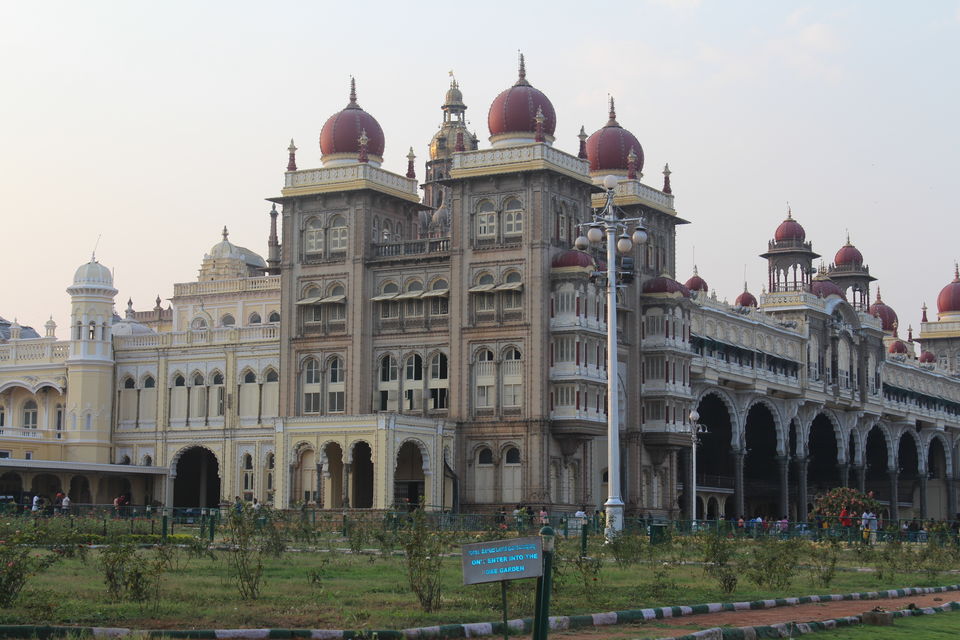 Mysore Trip was our first trip together after we came to Bangalore. We were all very excited about the trip. We were total five members in the group- two couples(Couple 1 : Sangram & Deepshikha, Couple 2: Pintu & Rinki) and myself, the only married bachelor…

We tried to keep the entire trip cost effective and so we decided to visit Mysore by train. I think the decision was not at all a bad decision because there are multiple trains that go to mysore via Bangalore. But we opted for the best one, Shatabdi. We got the tickets for AC Chair car. The journey was very much comfortable. We boarded the train from Yeswanthpur Railway station by 11Am and we reached Mysore by 2PM. We had already arranged for an Innova and driver being exceptionally punctual was waiting for us outside the station.

After getting out from the station only, we realized that we are visiting Mysore at the wrong time. It was extremely hot outside. We rushed towards the hotel. The hotel was booked in advance by Pintu and he did well in his part. He did our booking in one of the 3 star hotels but at a very affordable rate. I don’t remember now how did he do it but the complete credit goes to him.

We took a much needed shower and freshened up and completed our lunch. The food options and the quality of the food were very good but it was also a bit expensive. After having lunch, we thought of visiting some local places. On the first day, the Chamundi hills and the Mysore palace was in our checklist. But we were able to complete Chamundi Hills only.

Chamundi Hills is famous for the temple of Devi Chamundeshwari located on a hill top. The temple was a good example of ancient architecture. You will be able to see gigantic demon statue outside the temple. The place was comparatively cooler than Mysore due to its altitude.

Next day we started much early after having our breakfast. We went to Tipu Sultan Summer palace. Then we went to St Philomena Church. The cathedral was very good. But when we went there maintenance work was going on , so were not able to explore all the sections of the cathedral. We saw many year old beehives in the walls of the cathedral but I did not understand one thing that why do few people get excited and feel themselves as super heroes after having a look of the beehives. There were few people who were trying to break the hives by throwing stones but still their intension was not clear to me as even if they succeed to break it, they are not going to get any honey out of that so easily. One of the superheroes was lucky enough to hit one the hives, the cathedral soon became a battlefield. The bees were stinging everybody within their reach and people are running here and there without knowing where to go. We took some photos and left the place at the earliest.

Our next place to be visited was KSR Dam. We did not enjoy much as the place was over crowded according to us. Also there was not much water as it was summer. With KSR Dam, our hunt ends for the day.

The next day we had to catch train to Bangalore. So we only kept the Mysore palace in our list for the last day. The palace was huge and extremely beautiful. There were elephants still there in the palace to maintain its heritage.The place is very good for photography especially during the sunset. The palace is decorated with the lights in every weekends and a band of royal musicians perform in the evening. We were lucky enough to experience all these and we all enjoyed as this was our first trip to Mysore.

Although our trip ends over here, but I would like to suggest few things for the people who are visiting to Mysore for the first time…

• Please do not visit Mysore during summer. Try visiting it the spring or winter.