Ride to Yana, and the unusual karst rock formations

As you reach at the end of the 0.5 km trek through the ever green, thick forest, a glimpse of the first monolith will leave you in awe. It looks like some strange alien structure from the Transformers movies. This is Mohini Shikhara. Walk further and you are welcomed by a second monolith which is even bigger than the first. This is known as Bhairaveshwara shikhara….

It was a bit late as we started our ride from Bangalore. Our plan was to reach our stay at Kumta which is 495 kms from Bangalore. It took us almost 10 hours of riding and by 4 pm we were at our accommodation. 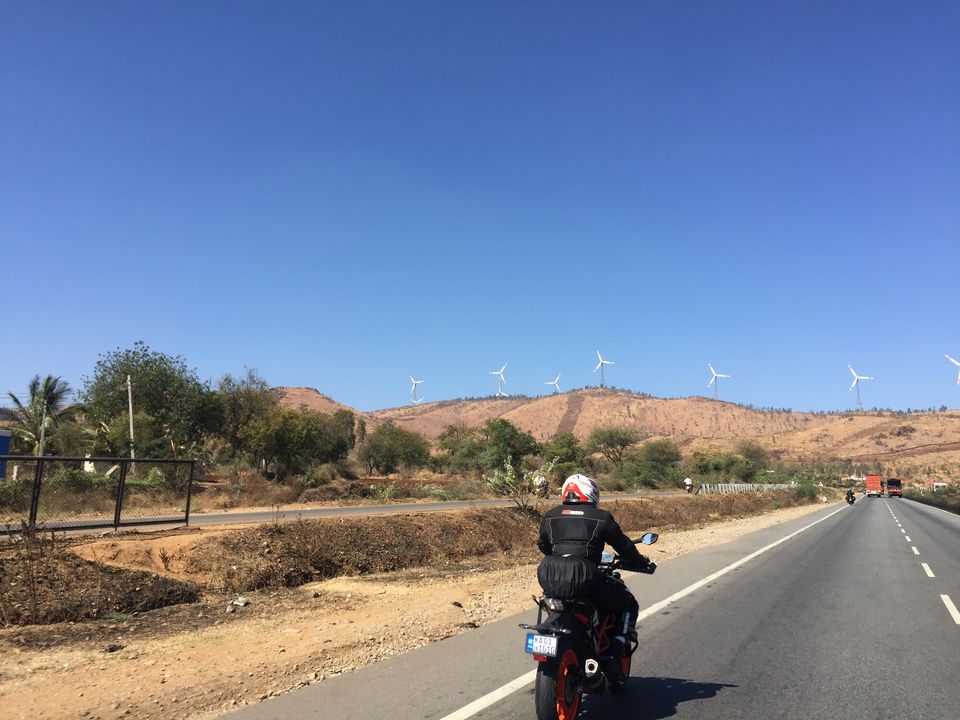 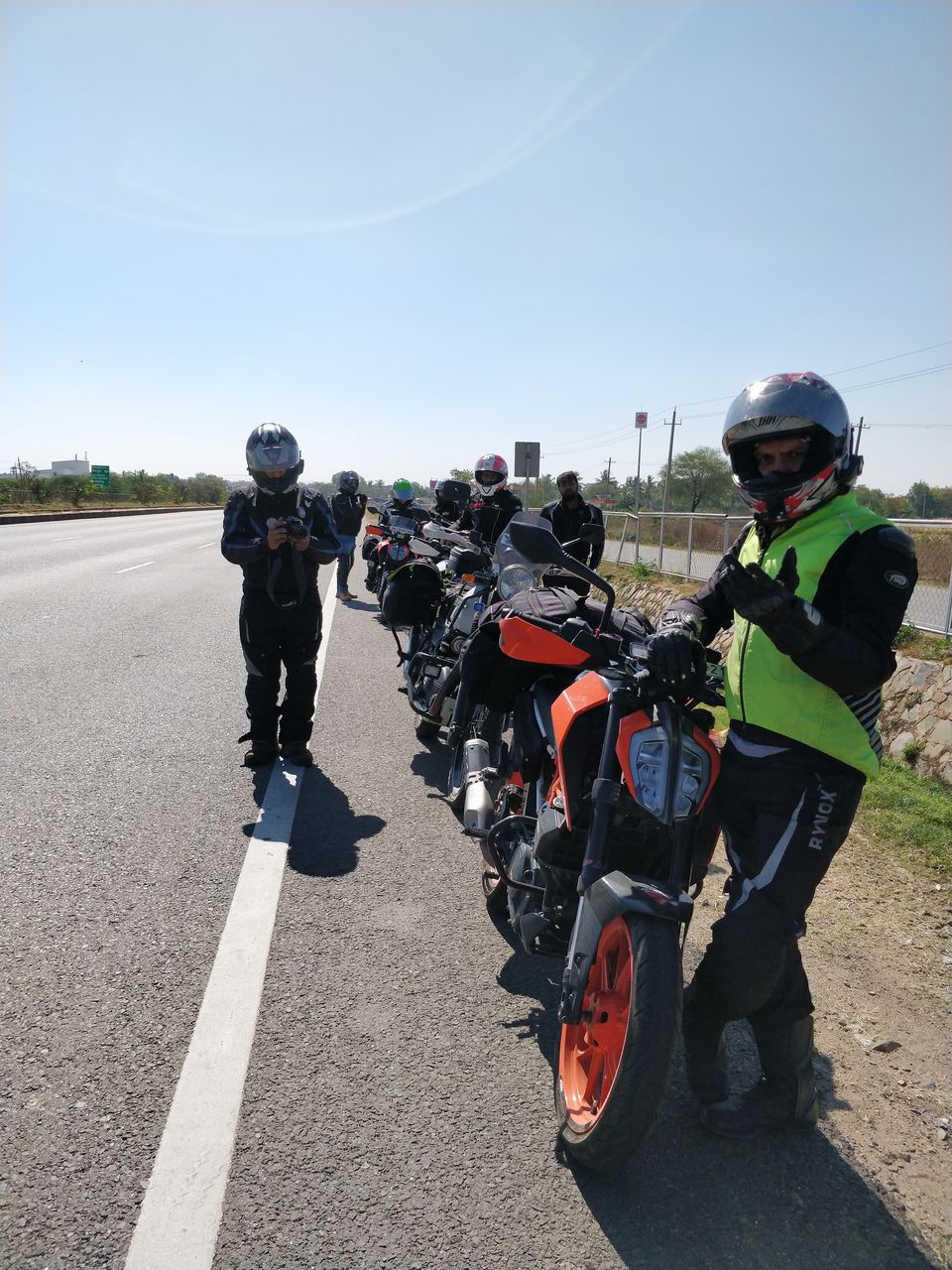 Later in the evening, we decided to visit Kumta beach and later went ahead and settled over a cliff where a panoramic view of the Arabian sea welcomed us.

It is true that the view of the vast ocean, the sound of the waves crashing down below and the blowing wind that carries the aroma of the sea will guide you to a different place. A place where your mind is at peace and the body is surrendered to the calmness that engulfs the entire place.

We stayed there till the blue sky burst into sparkling shades of gold and orange as the sun went over the horizon. A few fishing boats at a distance added to the enigmatic view which was unfolding at that golden hour.

Soon it was time for us to get back to reality and head to the hotel. 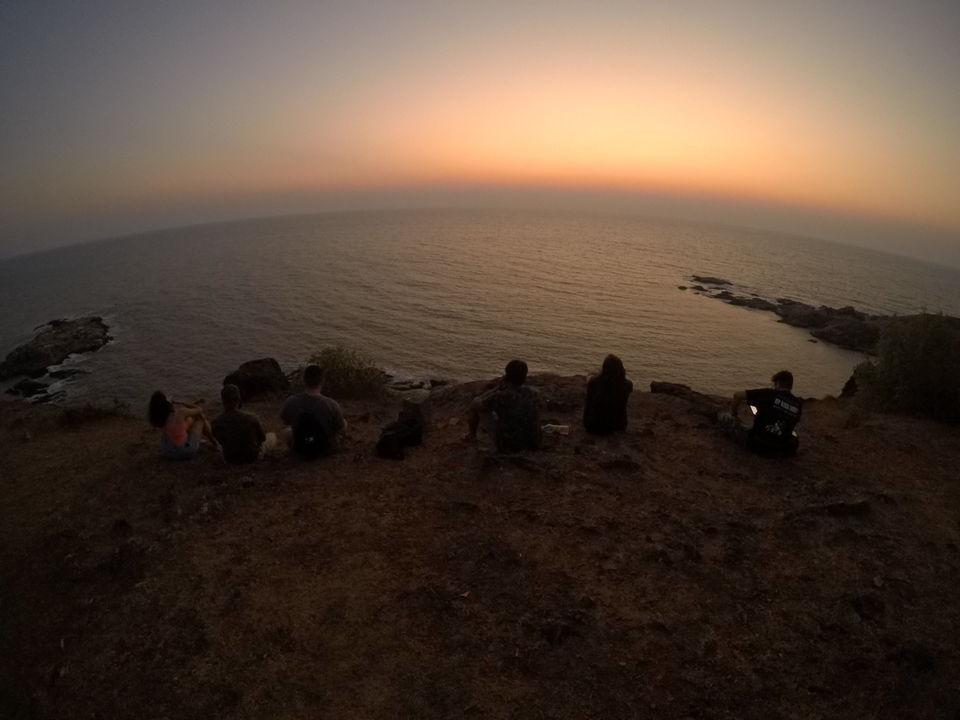 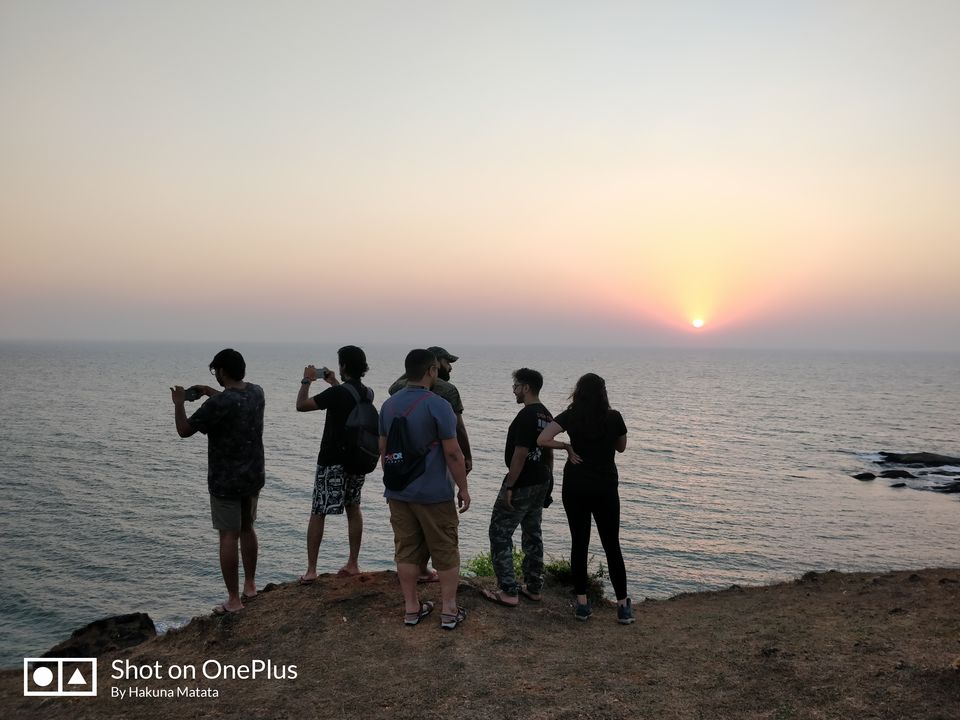 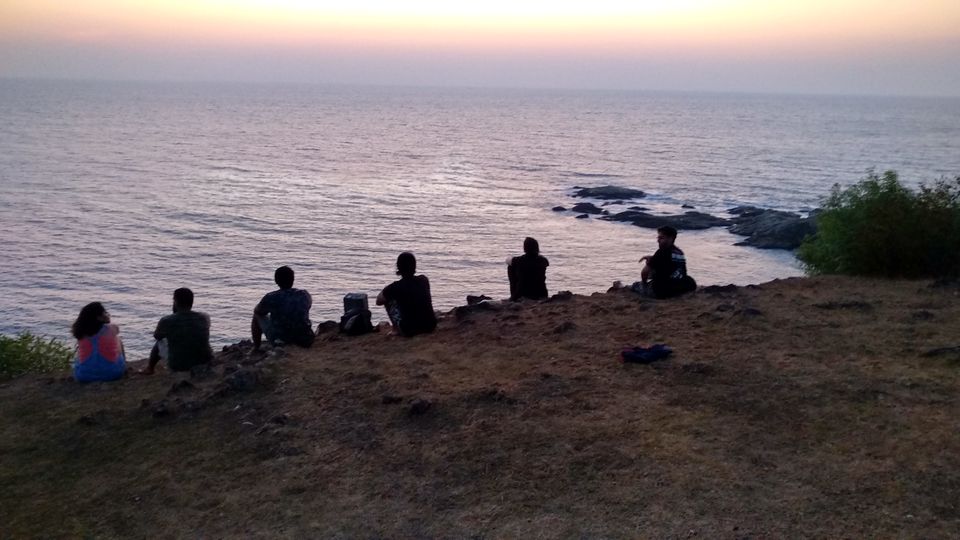 The two rock monoliths or hillocks, surrounded by thick forests and streams, rise sharply above the surrounding area near Yana village. They are part of the Sahyadri hill range in the Western Ghats in South India and give a conspicuous identity to Yana and the entire hill range.

At the base of Bhairaveshwara shikhara, there is wide opening that leads into a cave. The cave has a swayambu ("self manifested") Shiva Linga ("symbol of Shiva") over which spring water trickles from the roof of the tunnel overhead. Emerging as a small stream, called the Chandihole, it eventually merges with the Aghanashini River at Uppinapattana.

It was damn hot as we trekked our way to the monolith structures. The sun was merciless and was raining down fire upon our heads. We reached at the base of Bhairaveshwara shikhara and sat down under the shade of a snacks shop. And then came lemon juice for the rescue. Re-energized, we continued to the cave.

It was way over lunch time as we finished exploring the cave. We then trekked back the parking lot and headed towards Kumta.

Had lunch on the way and raced towards Mirjan fort.

A little background of the beautiful Mirjan fort narrated by a gentleman we met at the fort gate:

"….the fort known for its architectural elegance was the location of several battles in the past. The fort was initially built in the reign of Vijayanagara Empire. During their reign, the port of Mirjan was used to export pepper, Saltpetre and betel nut. The structure you'll see on the fort is mixed, which means that the fort was refurbished each time by the conquering army. You will see structures that point to British, Portuguese, Mughal, Maratha style of construction.

…there is a circular moat around the fort used as a defense measure. The fort is double-walled and has high turrets on the bastions. It is now seen mostly in ruins but is being restored to some extent. The ruins have been inferred as remnants of a secret passage, entry doors, a darbar hall and a market place. Stone images of Hindu gods and goddesses are also seen under a large tree. This large tree will immediately catch your eye…." 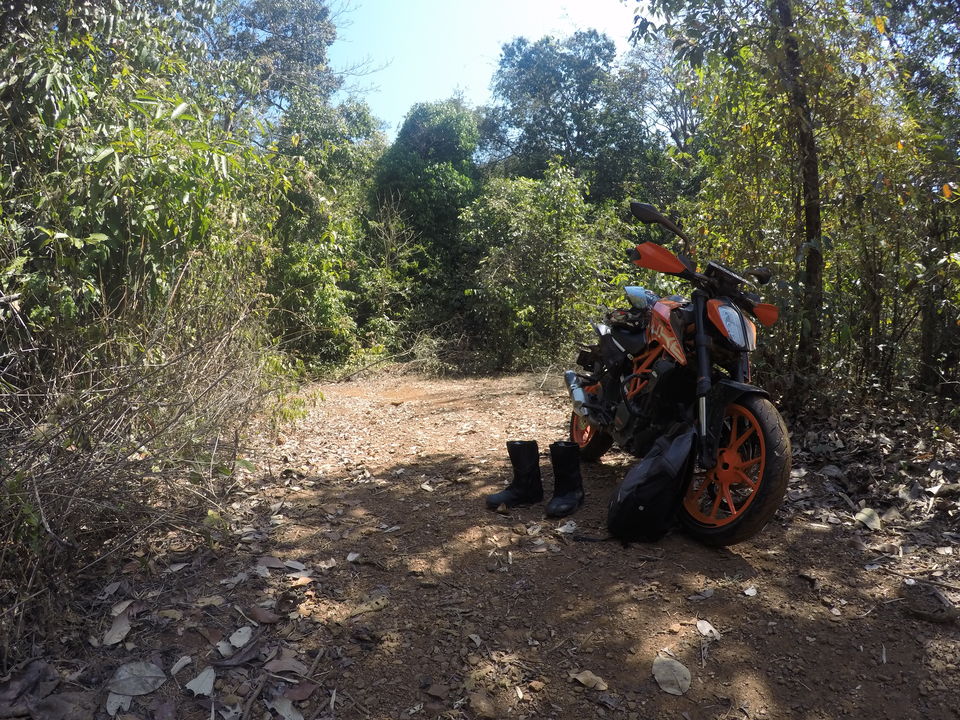 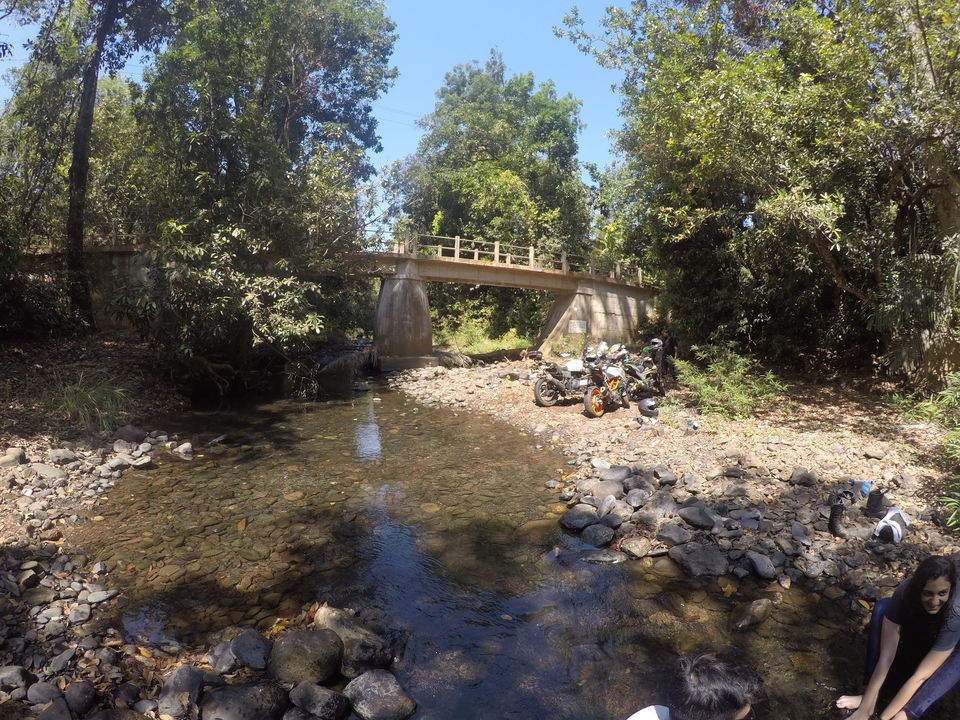 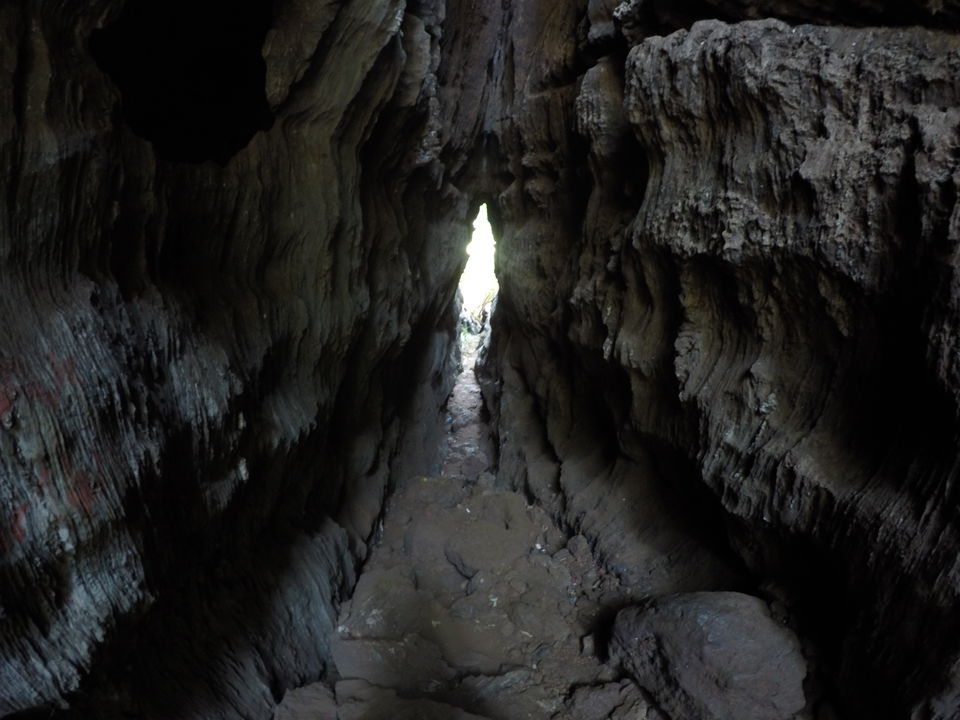 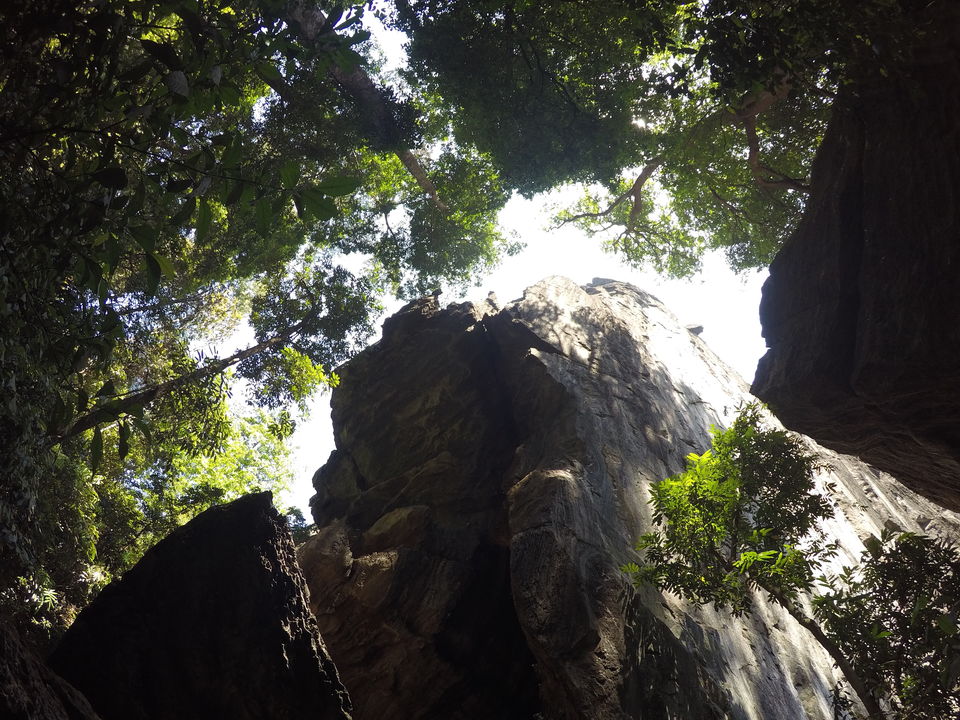 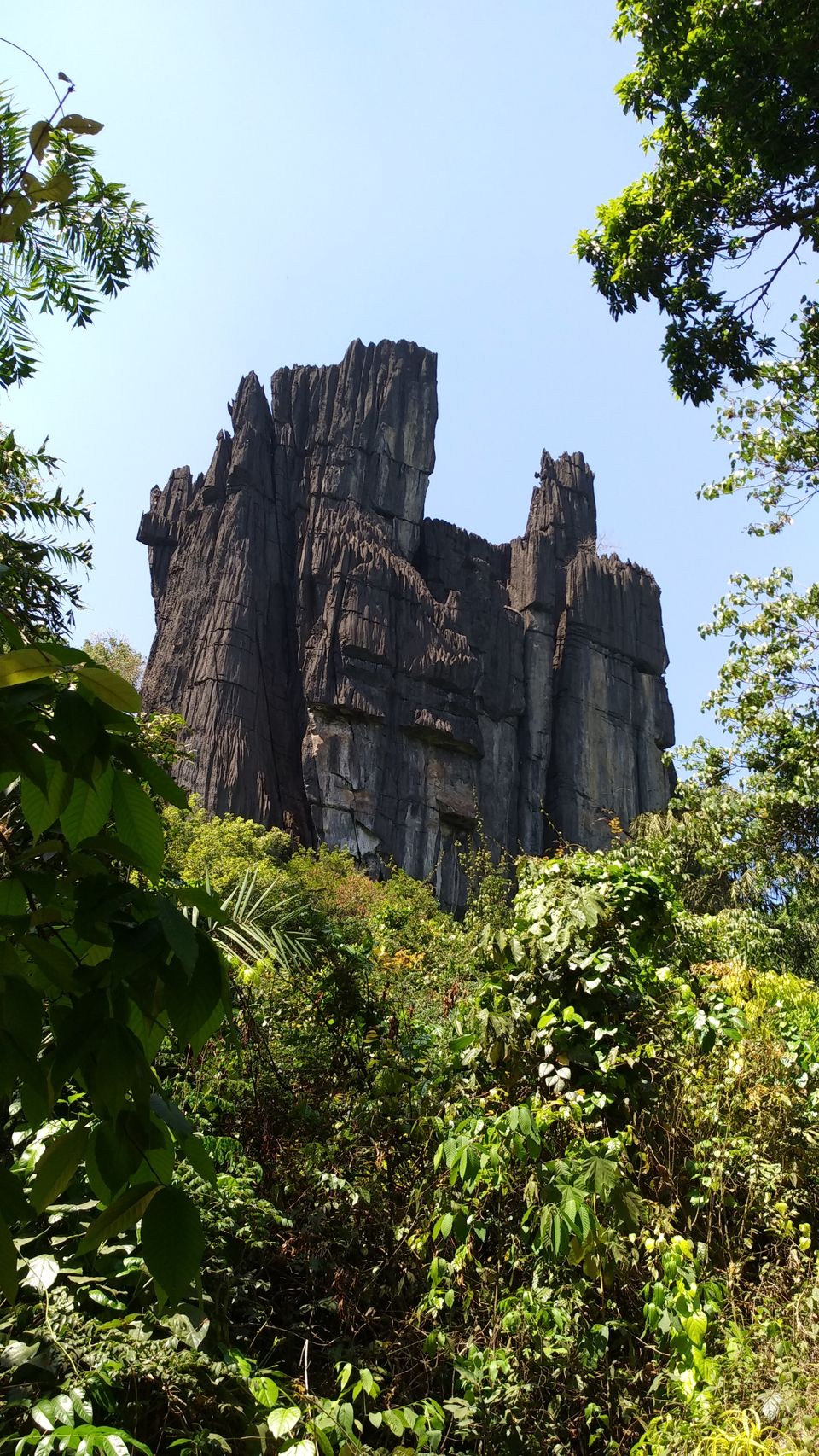 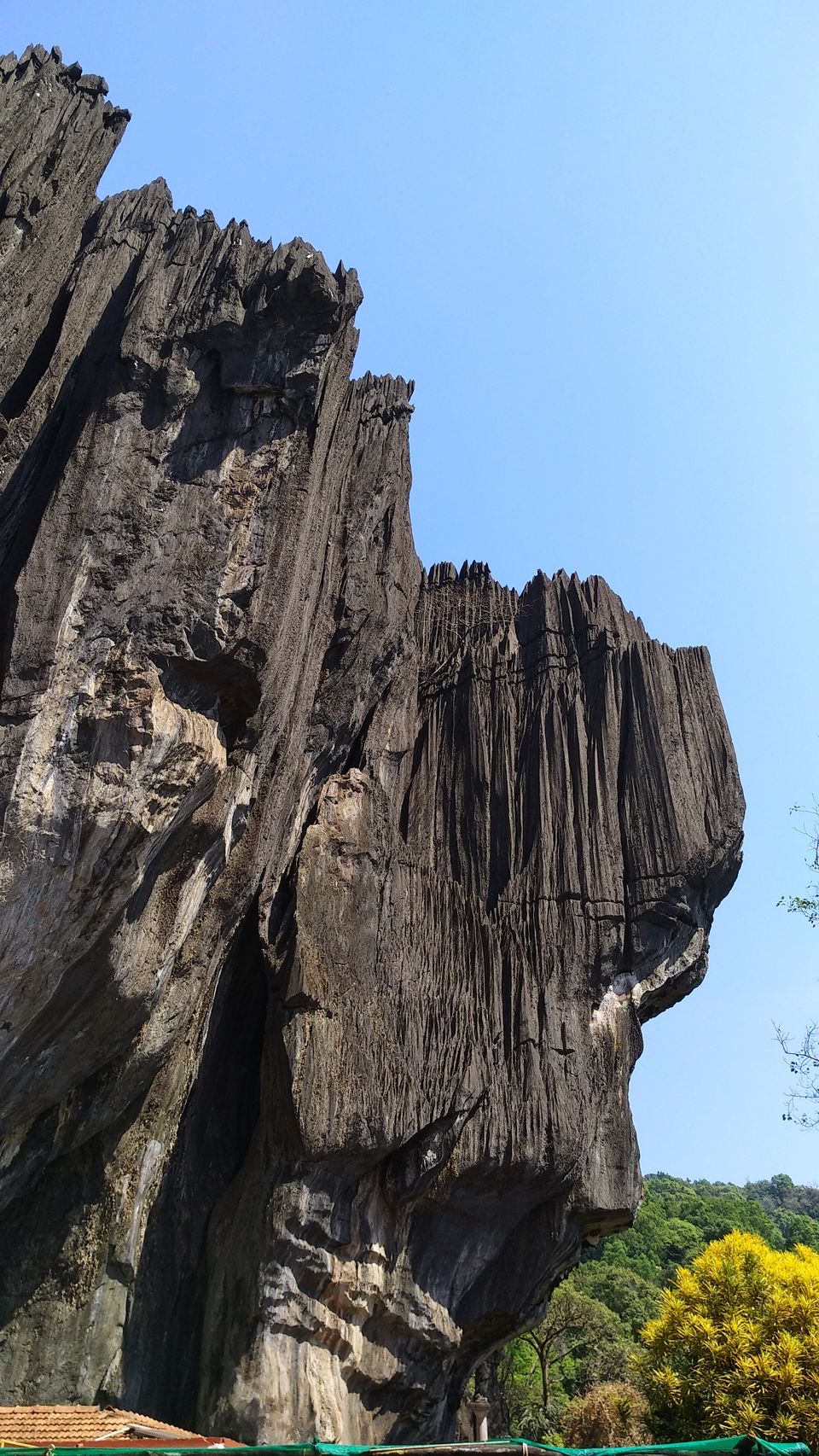 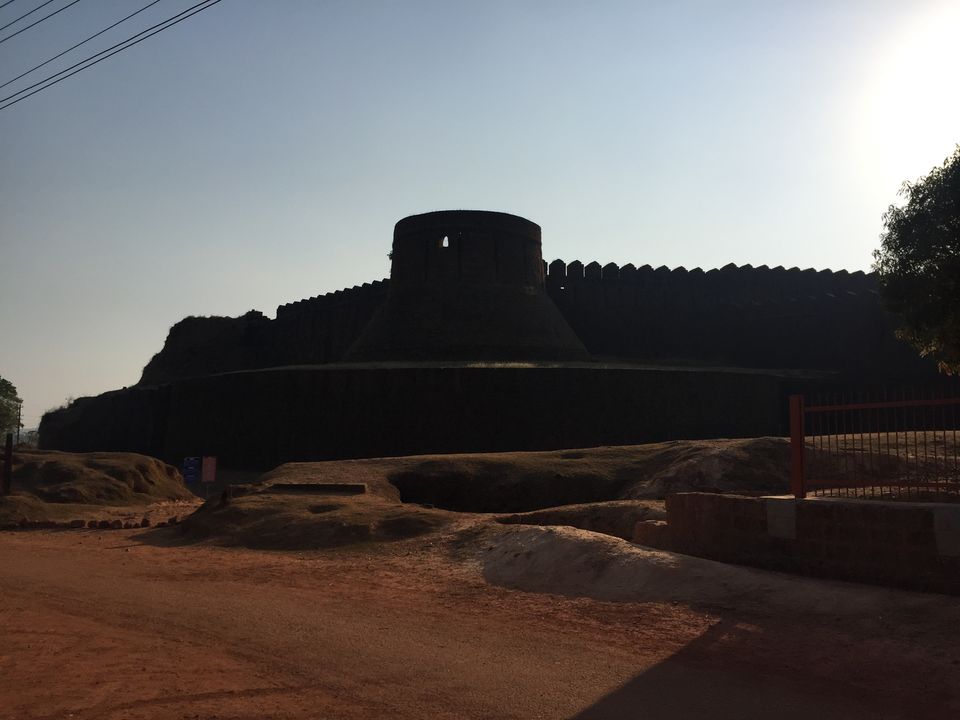 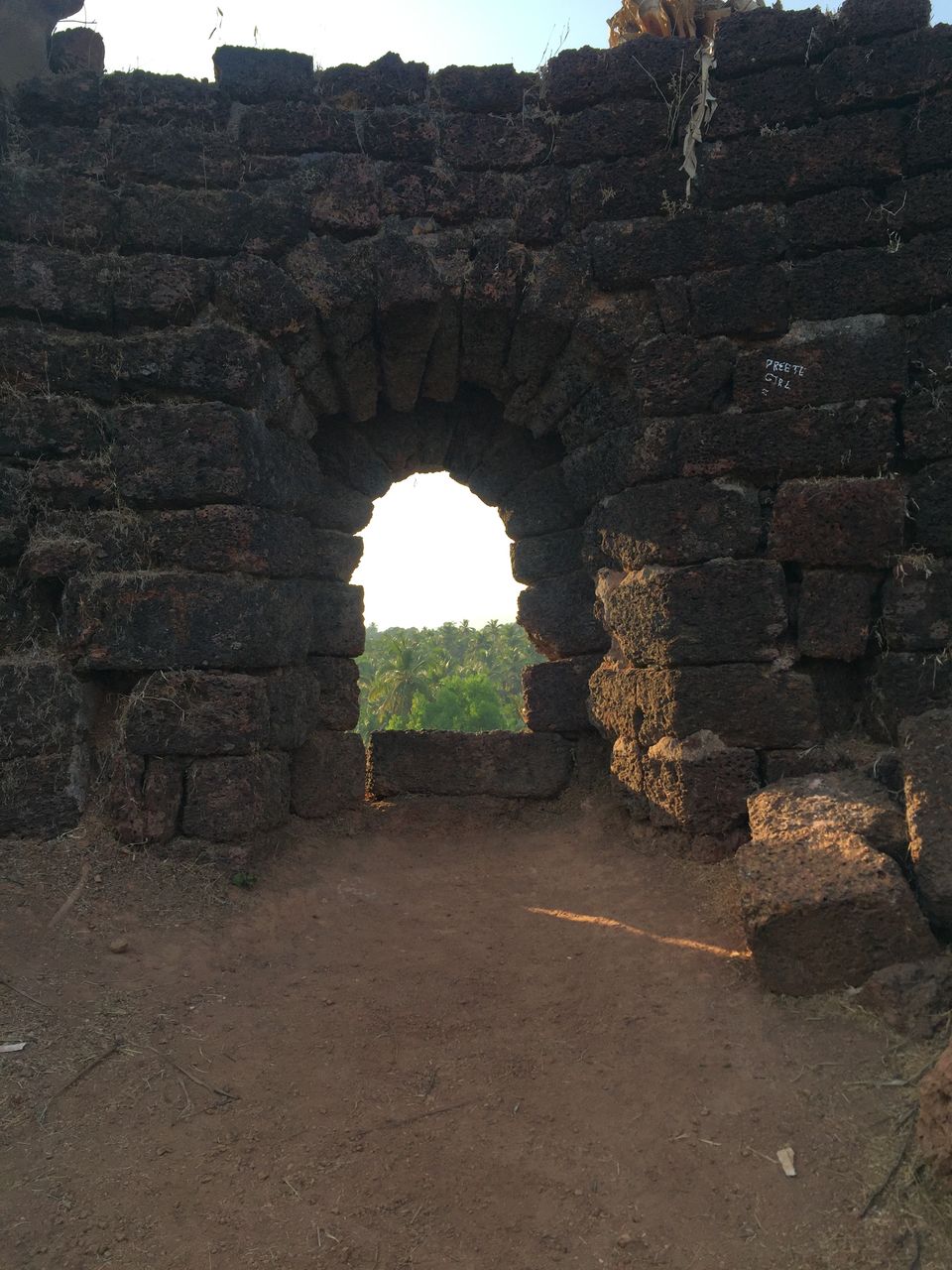 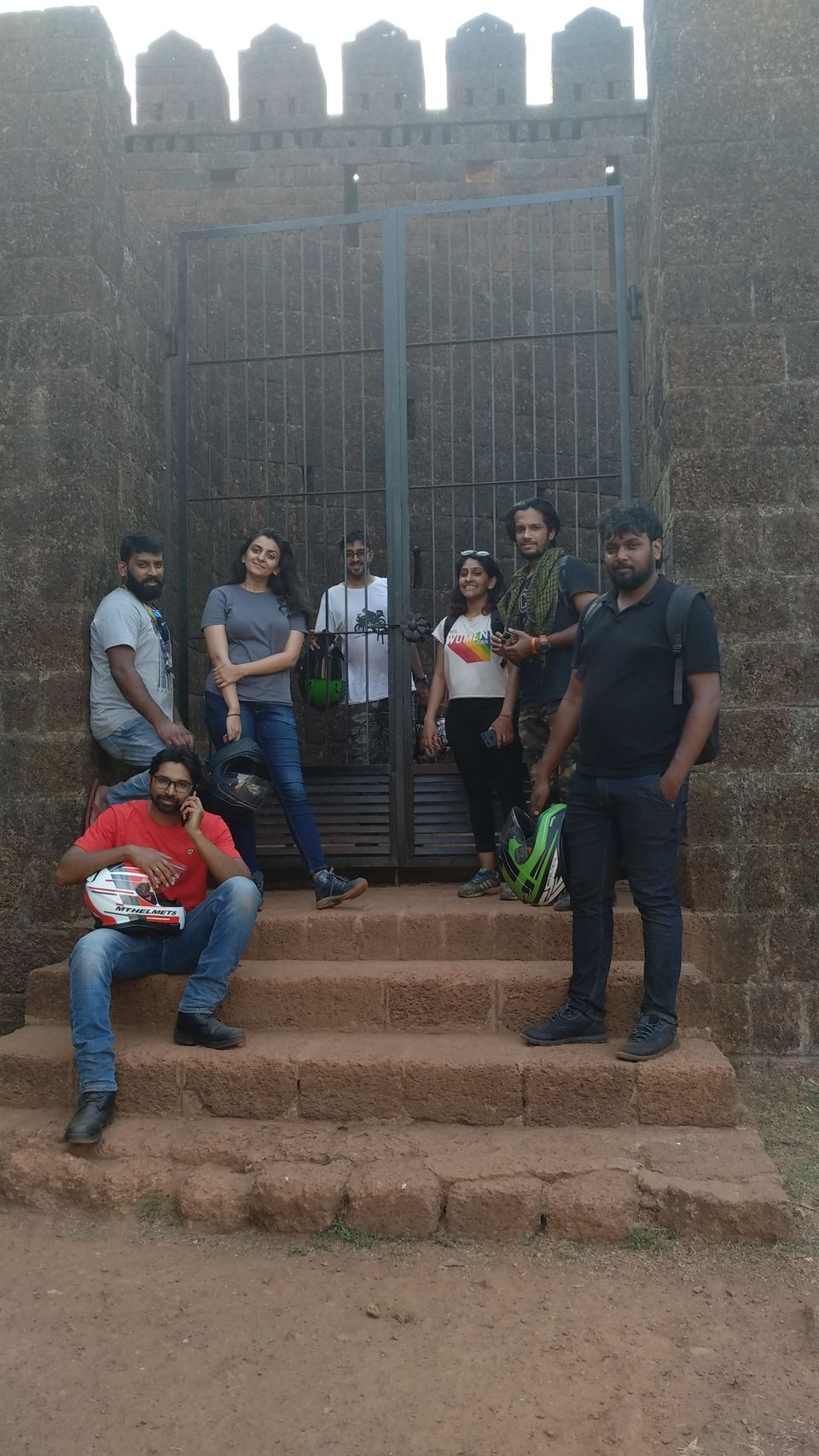 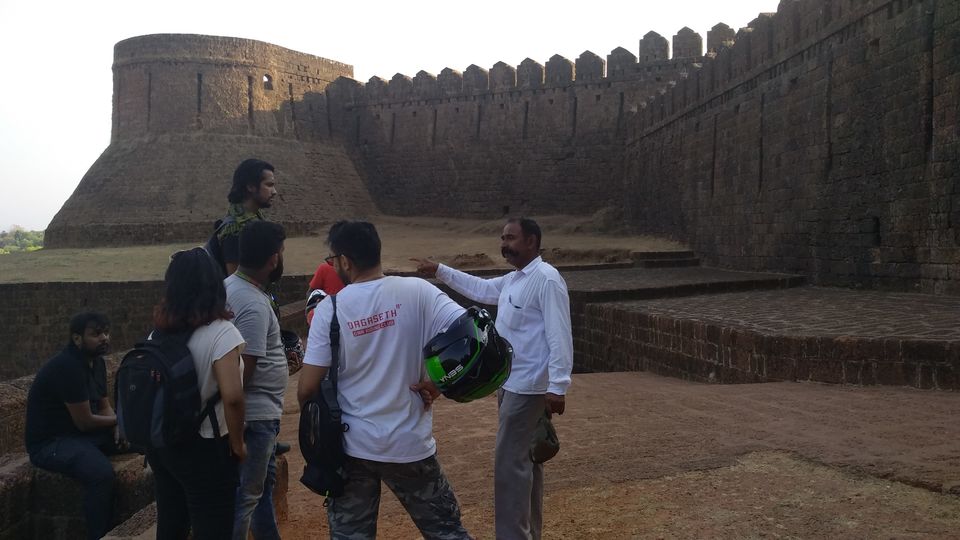 We then entered the fort and sat on the high wall near a turret ruin. We could see green fields in the distance, tall coconut trees lined up the horizon. Scattered rooftops of the houses in the distant villages. As always the words fall short to describe the beauty of the place and I struggle as my mind keeps travelling back to that very moment but I cannot put that down in words…

The fort closing time was 6 PM and as the sun started to set, we decided to leave from there.

We had ridden almost 500+ kms in the span of two days and the off road to the yana had a taken toll on the bikes. The chains have taken a lot of beating and they required immediate cleaning and lubing before we started the return journey.

Initially we had decided to start the last leg of the journey early in the morning however, the chain cleaning ritual took a hell lot of time and we saw the clock hit 11 o'clock as we cranked the engines.