Uncovering the beauty of Coastal Karnataka 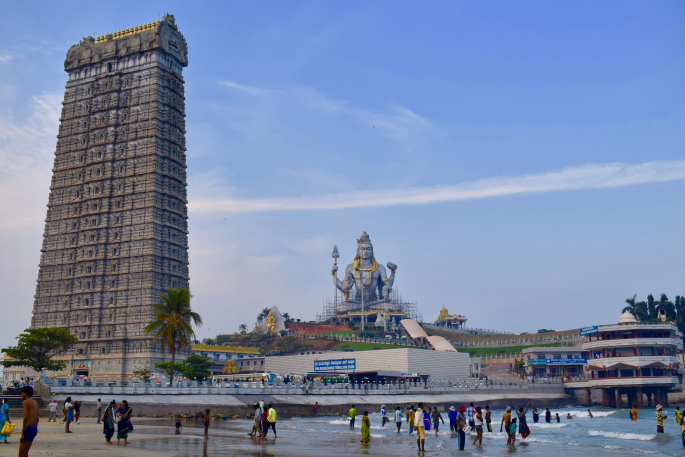 Upset from sudden cancellation of Hampi trip, I was searching for my next destination. That's when I came across the Coastal Karnataka Tour by Travel Trikon; which happens to be a renowned backpackers' group in Mumbai. The itinerary looked so appealing that I decided to book the tour immediately.

A group of 9 strangers assembled in the sleeper class bogie of Mangalore Express to set out on their quest to uncover the beauty of Uttara Kannada district. After settling down, half of the group decided to play cards and a sleepy head like me decided to ditch the group. With every passing station, these strangers were uncovering the possibilities of a great friendship. Although I decided to sleep, the crazy laughs of the rest of the group kept me awake till the time these nocturnals stayed awake.

Around 7 in the morning, the train had reached Madgaon and the crazy lot had woken up to grab breakfast. With lakes and greenery along the route we were getting closer to Bhatkal. The platform of Bhatkal railway station welcomed us with a carpet of yellow flowers.

A mini bus arranged by Travel Trikon took us to Murudeshwara. After an hour of checking in to Kamat Yatri Niwas, we all assembled at the restaurant and hogged on unlimited Udupi thali, and left for Gokarna.

To our despair, Gokarna temple was closed so we decided to head to Gokarna beach.

After walking along the beach and capturing its beauty in our cameras for almost an hour, we decided to leave for Om beach to watch sunset. Om beach got its name from the holy symbol representing Om in Hinduism.

Om beach has a strangely laid back vibe. Walking along the beach, I first spotted a foreigner sitting idly staring at the waves, as I went a little ahead, I saw a lady sitting on a rock painting the picture of the beach, moving further ahead, I saw a man collecting litter in a polybag voluntarily. Everybody was engaged in doing something or the other. Our group was busy playing frisbee and clicking group pictures but I decided to sit on the sand and embrace my solitude. As usual, the sun decided to hide behind the clouds giving an orange hue to the sky. The orange sky had turned black by now and it was time to start back to Murudeshwara.

After having a sumptuous dinner, we all were too tired to even walk up to the hotel, but our group leader Manoj, who was the craziest of all, dragged us to the beach for a post dinner walk. It was midnight and after sitting and chatting on wet sand, enjoying the sea breeze and of course Manoj's ghost stories for almost an hour, we decided to head back to our rooms.

"It's 6 am, time to wake up and get ready for the temple visit guys! "Our enthusiastic group leader Manoj was waking everybody up. I pulled myself out of the bed reluctantly in order to get ready early so that I could pay a quick visit to the beach.

Our group was here now, all set to visit the Murudeshwara Temple which has the 123 ft high, world's second tallest Shiva Statue in the backdrop of Arabian Sea. The temple has a 18 storey Raj Gopura and the view of Lord Shiva statue from the top of the Gopura is breathtaking. The top of the Gopura is accessible by elevator which is nominally priced at INR 5 per person.

After the visit to the top of Gopura, we proceeded to the famous Shiva statue. An artificial cave is constructed beneath the statue where you take a tour through the mythology associated with the temple. After taking a tour of the entire temple complex and capturing its beauty, we decided to fuel ourselves for the upcoming trek to Yana caves which are one of the few unique monolithic rock formations in India.

And here we are, at Naveen restaurant, enjoying the amazing view of the beach

Few more steps and we were inside the cave. The shutterbugs were leaving no chance of capturing the beauty of the caves and the selfie addict duo of the group was breaking all the records of clicking maximum number of selfies.

It was time to visit Mirjan Fort, which was the last leg of our trip. The fort was built somewhere around 13th century. Even Wikipedia is confused as to which emperor built it! Anyways, the fort still stands tall and is quite Instagram worthy.

With the visit to Mirjan fort, the trip was officially getting over. After boarding the train from Kumta station, we were all in a mood to relax but as usual, Manoj had a lot of craziness left to unravel! After singing a lot of songs, playing cards and a night full of madness, we had reached Mumbai. It was time to part with the group and get back to the normal routine. But the travellers will cross their paths again, may be on another tour with Travel Trikon!

To read more about my travel experiences, please visit https://nomadicmeteor.com and don't forget to hit the follow button!